The map collection at the Bodleian is arranged by area, and identified by letters and numbers. A is for maps of the Universe, B the World and so on down to N which is for the Antarctic. Further subdivisions within these letters give you individual countries, so for instance England is C17 (the C is for Europe). The system doesn’t end at N though, for there is one further section full of maps which either are of places that don’t exist or are cartographic items without a map on. 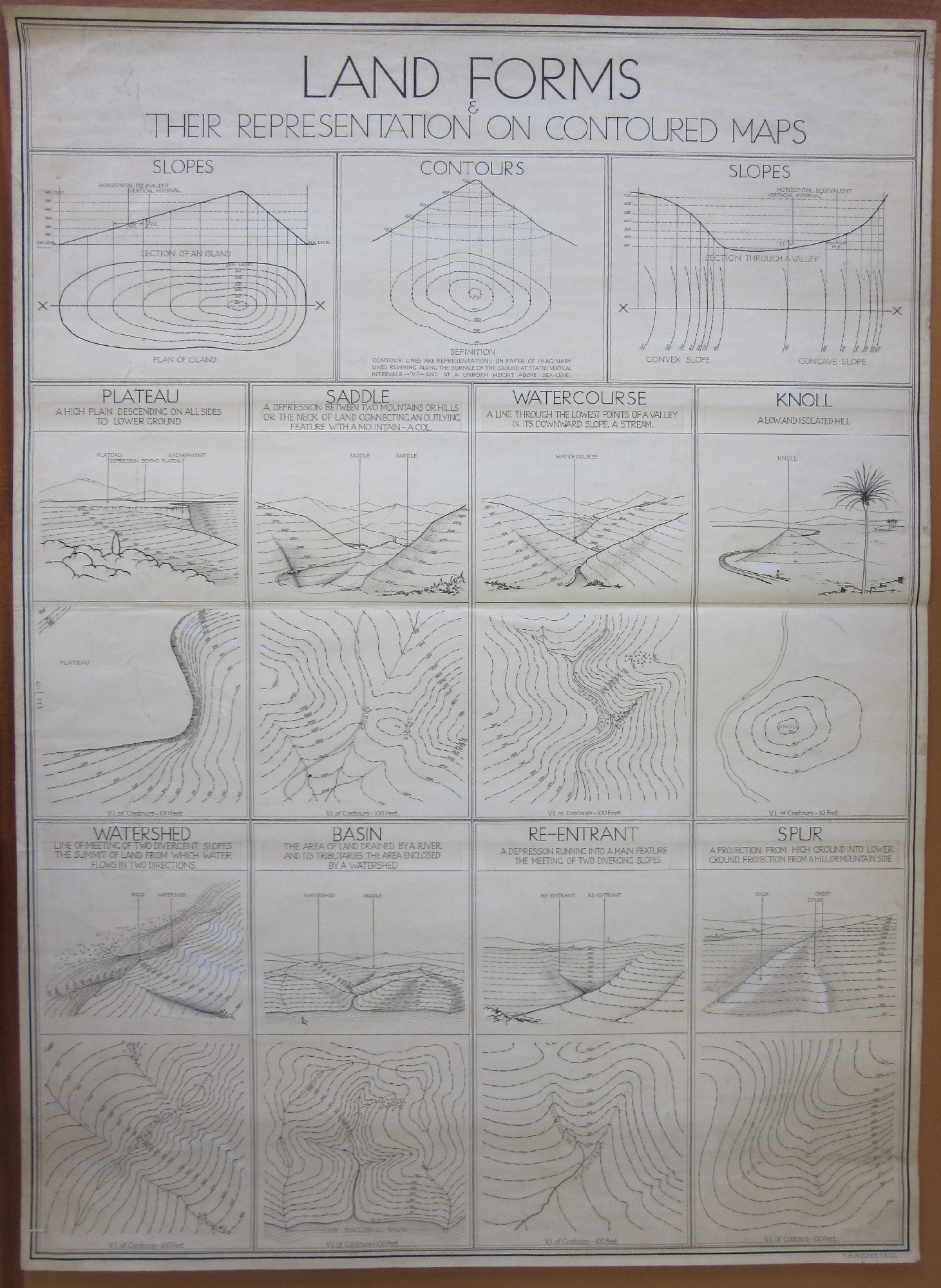 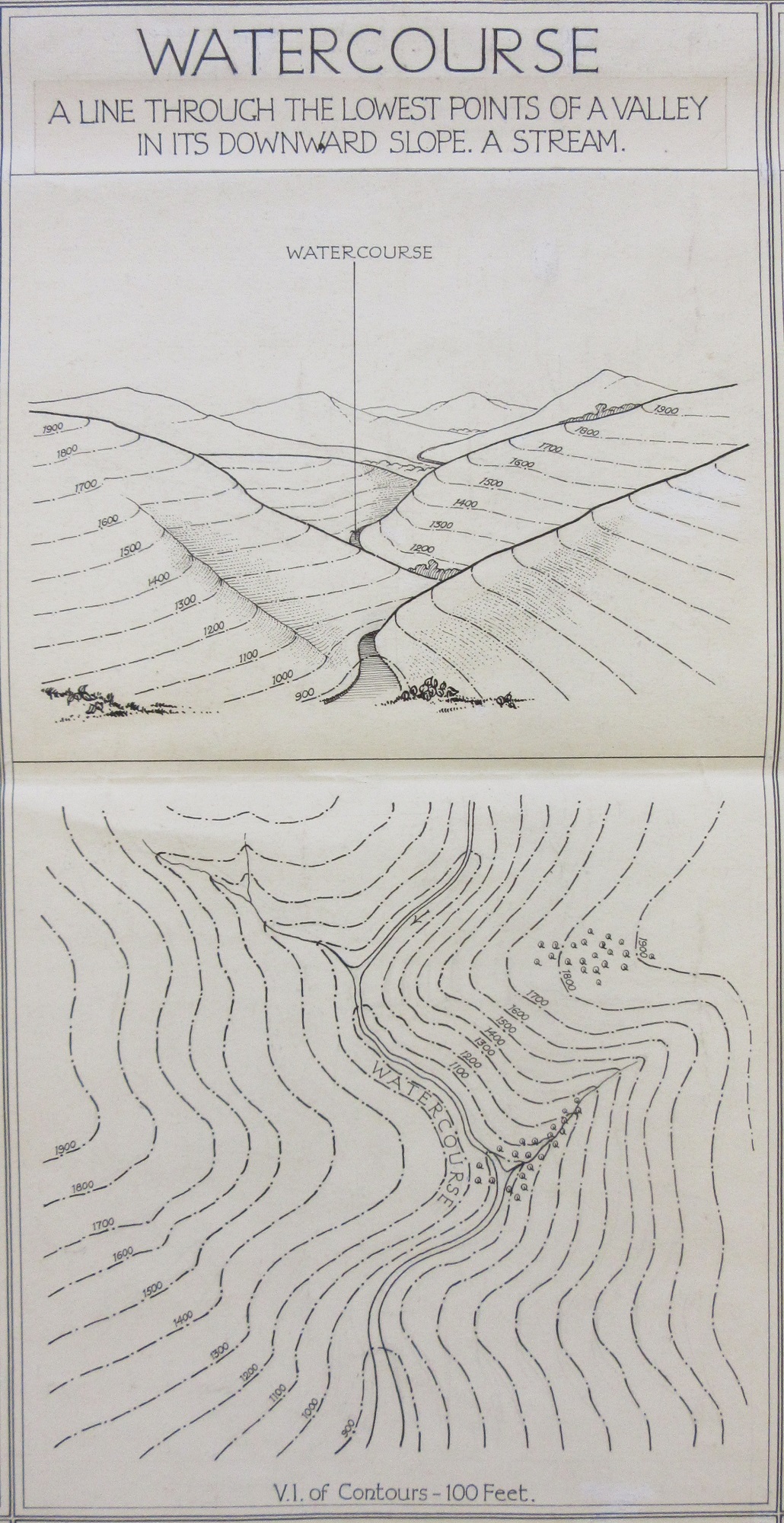 This is the O section. Included in O are maps of Middle Earth and Narnia, of Ambridge and the Island of Sodor (the Archers and Thomas the tank Engine respectively, in case you were wondering). There are also instructional diagrams for drawing maps. Neither have maps on but both have a simple beauty to them, and hark back to an age of plane-table surveying and pencil and paper work.This first example (Land forms & their representation on contoured maps, c1970, O1 (33)) gives examples of different types of profiles and land forms with accompanying examples of how these forms would be reproduced on maps with contours. This map is part of the general collection, the second example is in a frame and hangs on the wall in the Map Office. While the first example shown hasn’t any publishing details apart from the name ‘T.H. Hughes, F.R.G.S.’ in the corner the second example is published by the Army Signal School, in Dunstable, and would have been used as a teaching aid for training Military cartographers. 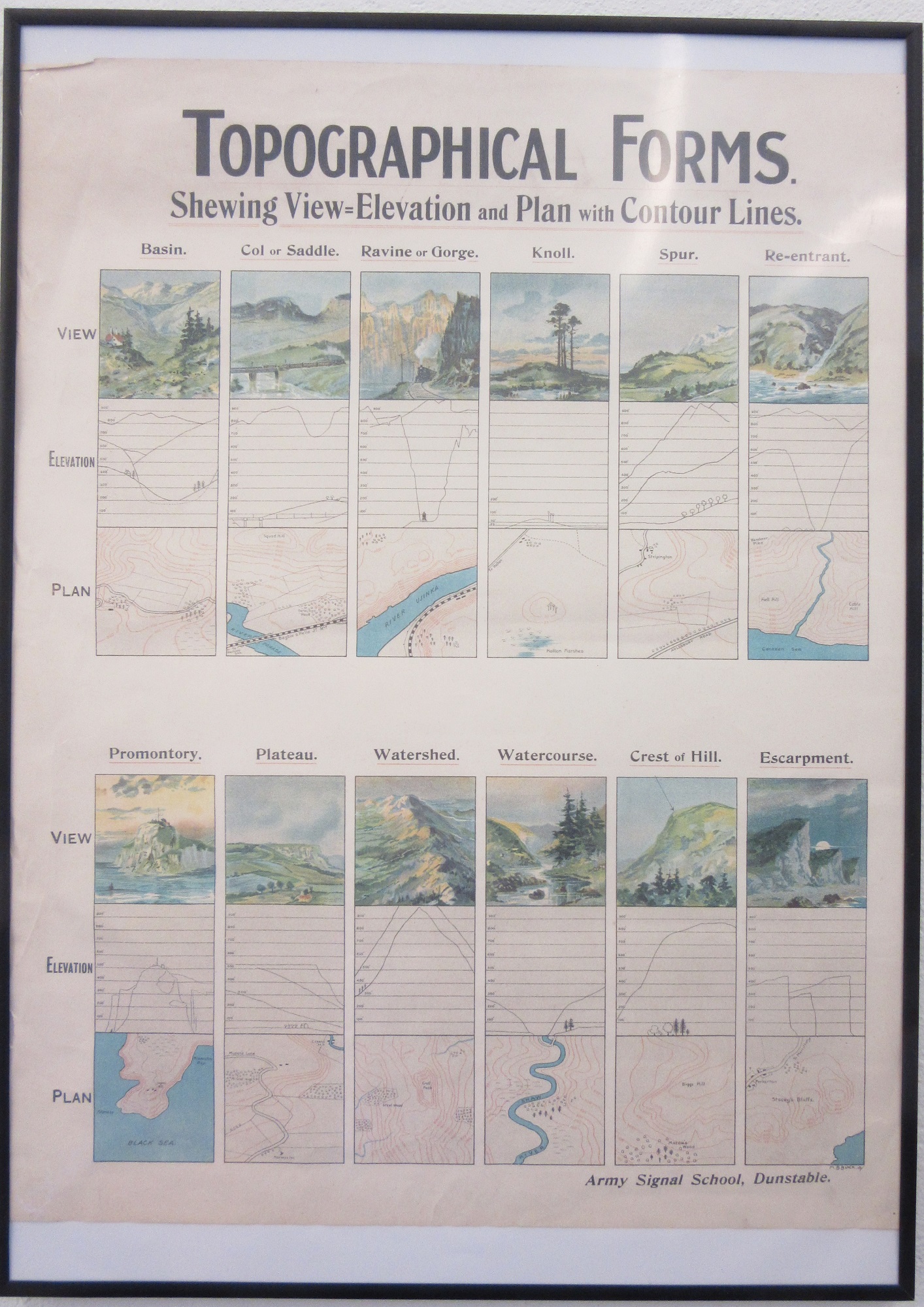 The School was at Dunstable for a brief period from 1916 until just after the end of the First World War. The Bodleian also has cartographic training manuals for the Austrian and German Armies.

We’ve blogged about D-Day mapping before, with detailed beach and German defences maps featuring here http://blogs.bodleian.ox.ac.uk/maps/2015/09/ and http://blogs.bodleian.ox.ac.uk/maps/2014/06/ but the 75th anniversary of the landings gives us another chance to show some of the items relating to Operation Overlord in the Bodleian. D-Day involved putting onshore over 175,000 troops, 4,500 guns and tanks and another 15,000 vehicles, all transported across the channel by over 11,000 ships. With planning starting in late 1943 maps would play a crucial roll in the organization, movement and attacking abilities of the Allied forces to make the operation a  success. Nearer the time enemy troop deployment and defences were plotted onto existing mapping (see examples in the links at start of this piece) but in the early stages of planning the operation non-military aspects had to be studied and considered. Two examples are shown here from the Office of Strategic Services, the United States Intelligence Agency which after the war became the C.I.A. 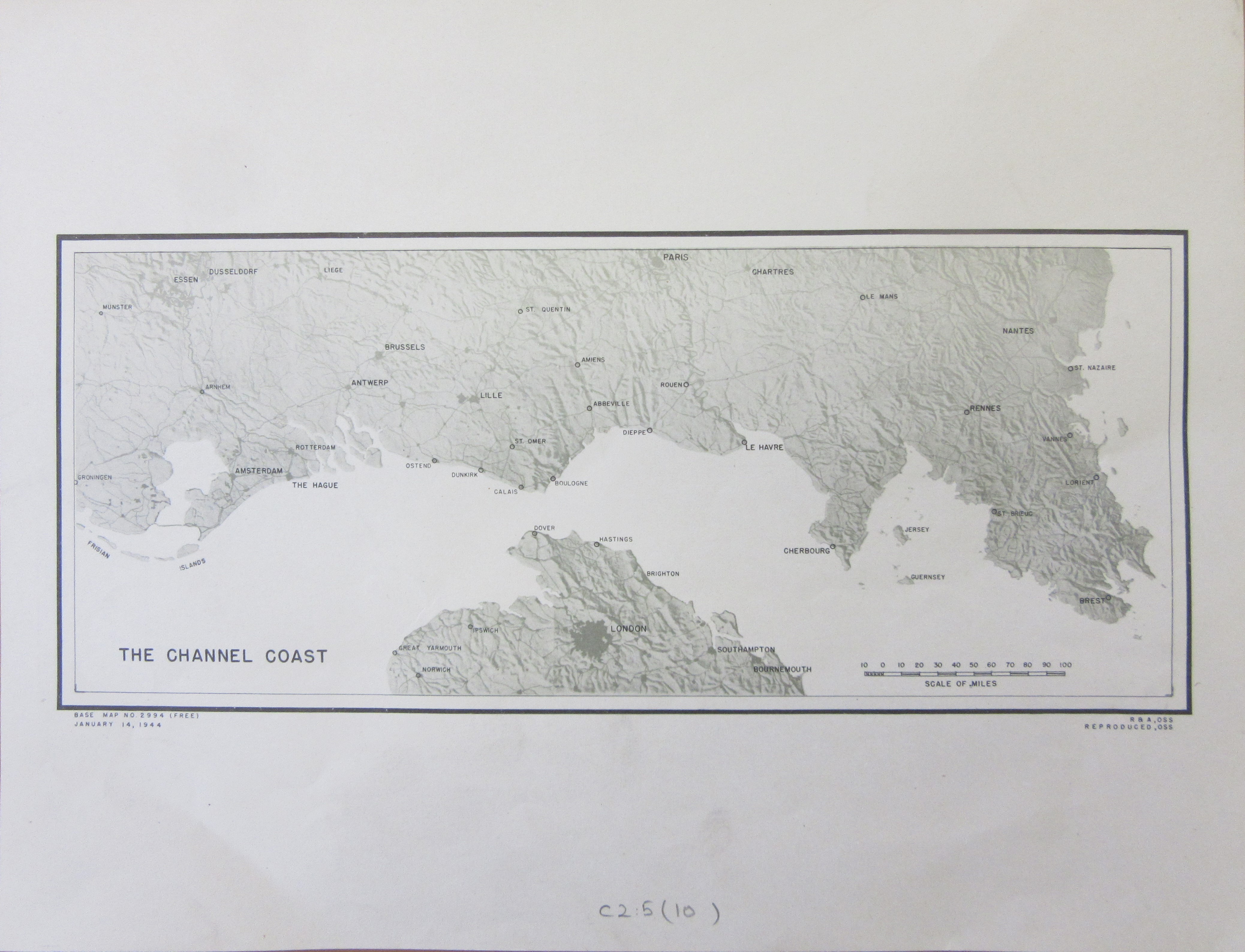 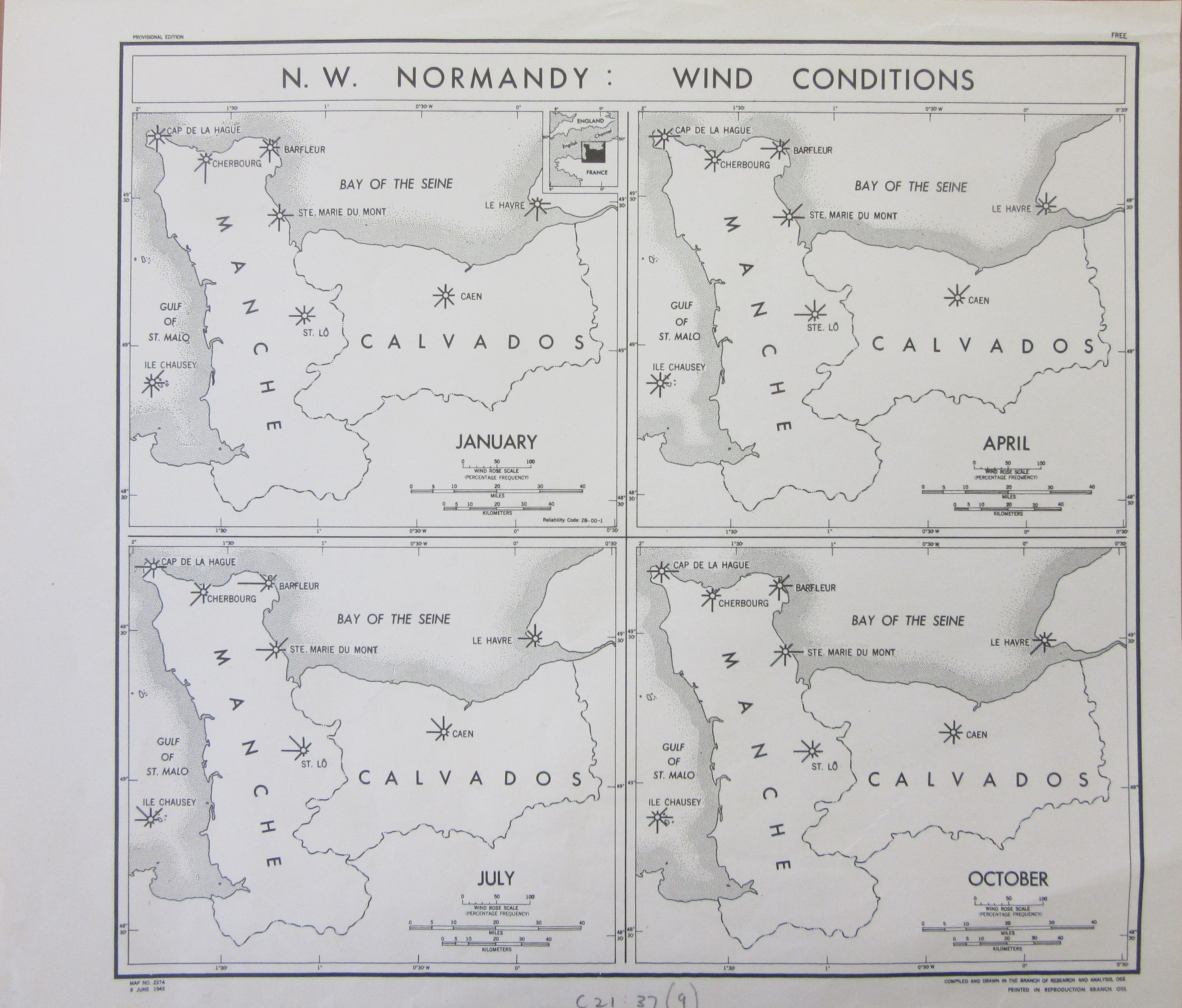 The first map gives a different perspective of the routes across the Channel and illustrates nicely the different options available, and the distances involved, to Allied Command on where to cross the Channel. The second map is one of a number produced by both the American and British Intelligence Departments dealing with the purely practical information needed to plan the invasion, in this case wind conditions but there are similar maps for tides and inland flooding in Normandy.

The OSS was also involved, along with the British Intelligence Agencies, in a major deception campaign to convince the Germans that the landings would take place anywhere else than on the Normandy beaches. Codenamed Bodyguard, creating new and totally fictitious divisions and artillery, false radio transmissions and leaking information to double-agents meant the Germans were fooled into believing in a build-up of Allied forces in Britain which didn’t exist. 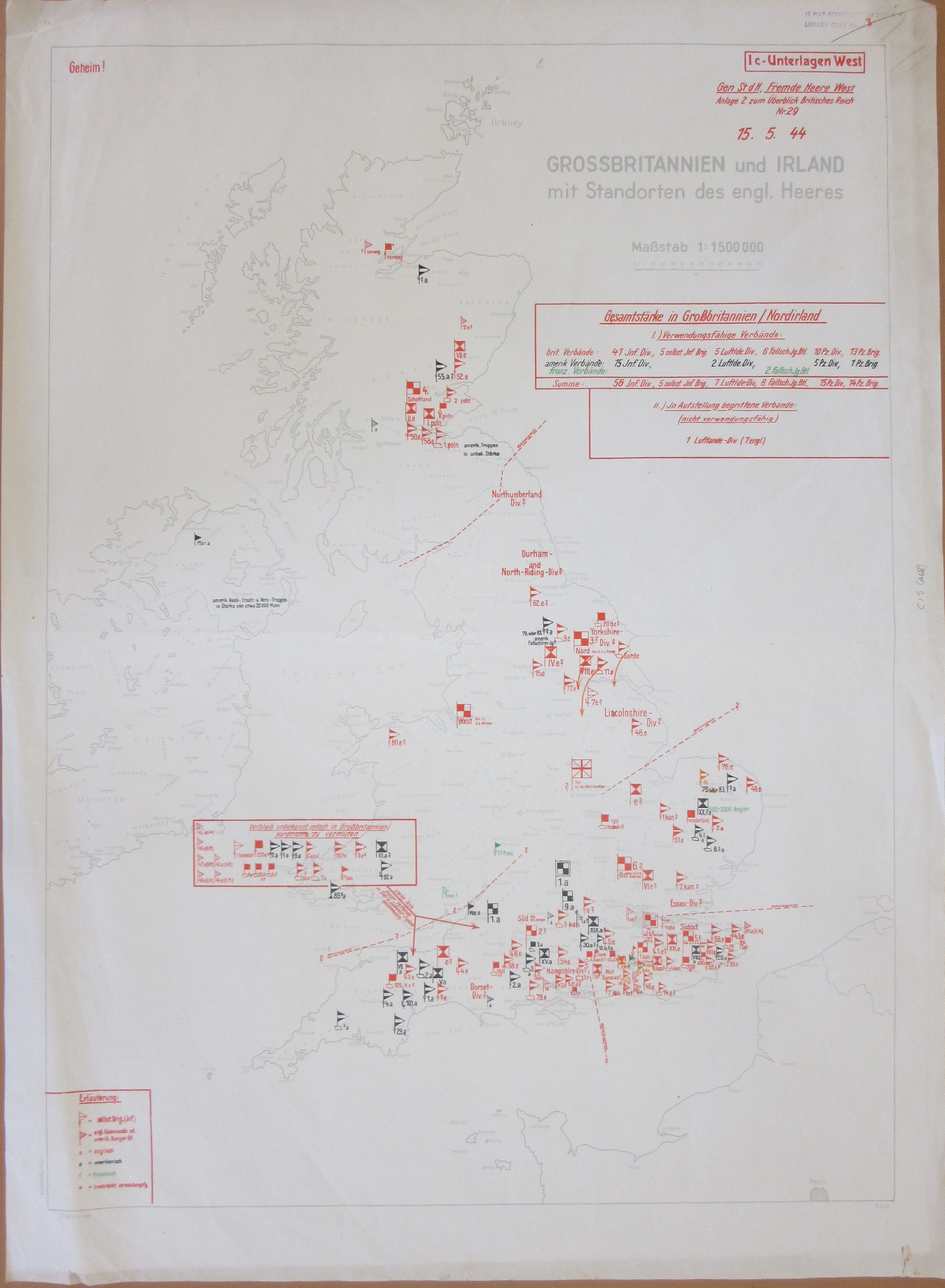 This map of Britain made by the German General Staff dates from the 15th of May, 1944 and shows what the Germans thought was the deployment of troops three weeks before D-Day. As well as English Army positions (in red) it also shows American (in black) and French (green). 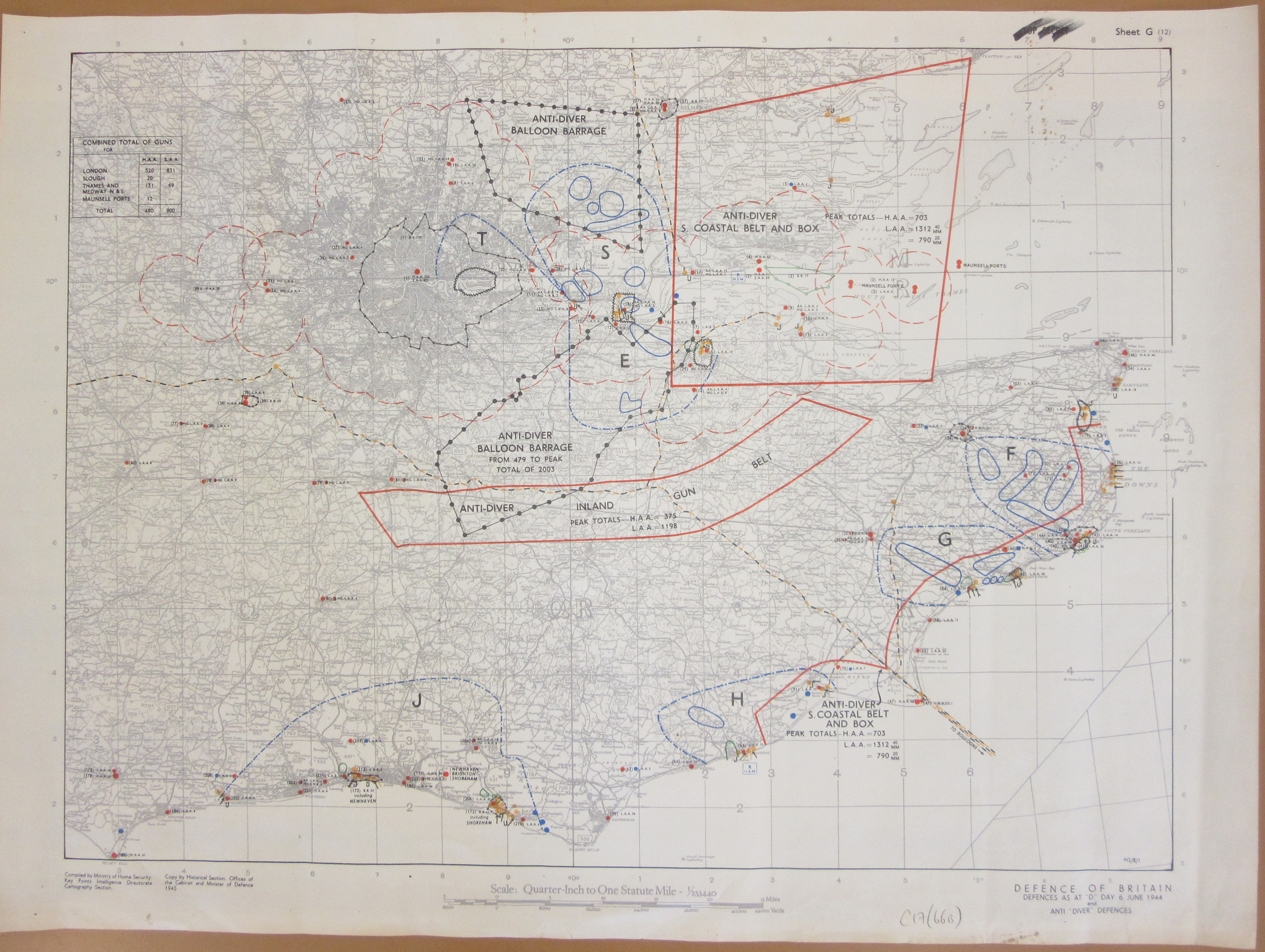 This British map shows defences and positions on D-Day itself with divisions and defences (“Diver” was the codename for the  V-1 rocket, first launched by the Luftwaffe in 1944)

One of the earliest actions on the 6th of June was the landing near the bridges over the canal and River Orme near the village of Benouville, the famous glider attack on Pegasus Bridge.

Capturing the bridges were crucial if the advance on Caen was to succeed. The above map is from the British cartographic department, the Geographical Section, General Staff,  while below is a German map of the same area with an extract of the bridge area. 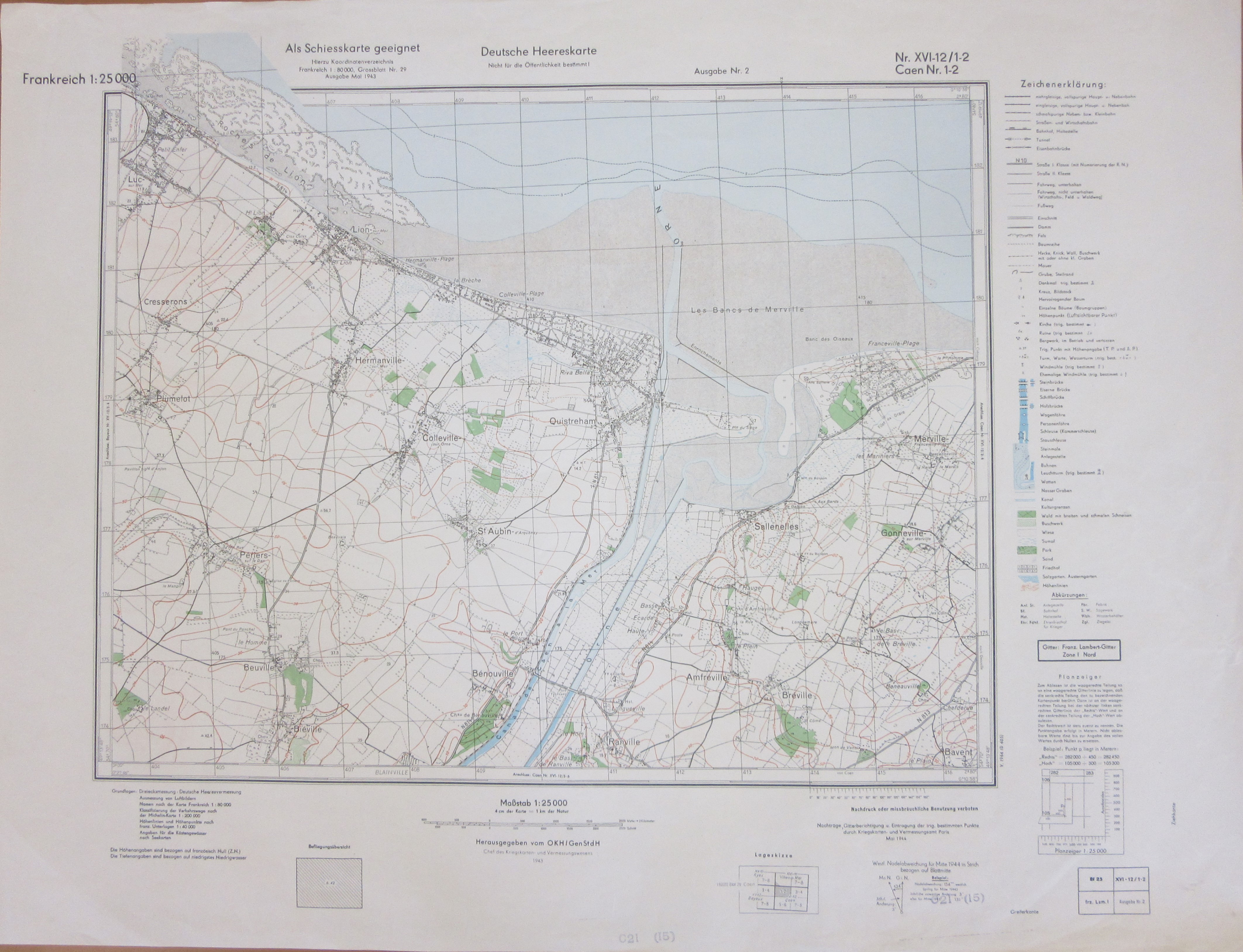 Finally a wonderfully simple but hugely informative map from the early stages of planning showing potential landing beaches. Gradients, geological conditions and length of beach are shown by colour and length of markings and direction of lines. This map shows the levels of planning for the invasion that were already in place in 1943. This extract shows the area of the beach landings on the 6th of June 1944.

This is the Guardian from the 7th of June. Coverage of the advances made by the Allied Forces through Europe and into Germany continued until the end of the war, often with maps illustrating the present situation at the time (the main war news on the 6th is on the advance through Italy and the recent Allied capture of Rome. French news is limited to reports on the considerable damage done to the French railway system by Allied bombing). These next three maps are from the few weeks following on from D-Day. 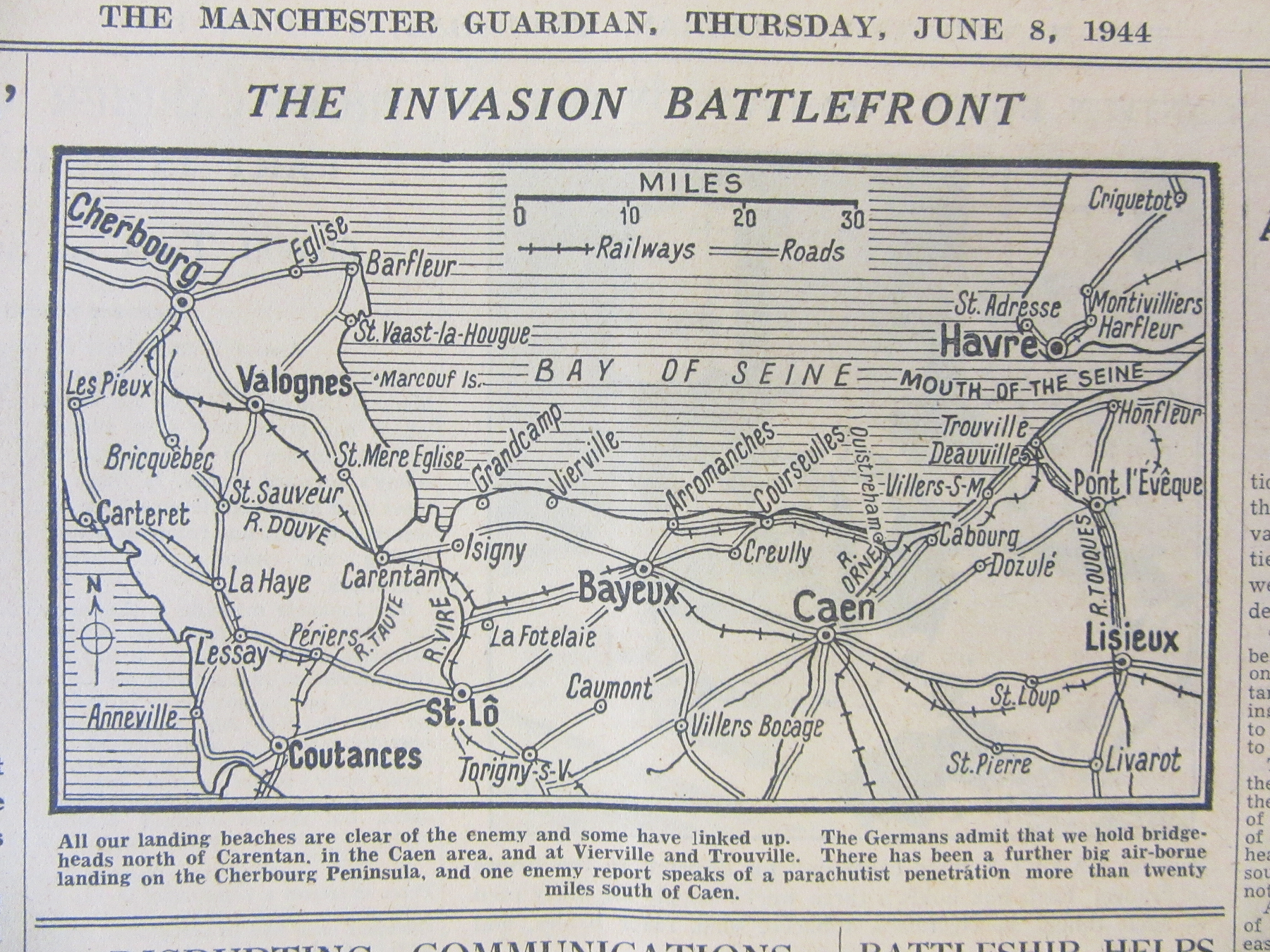 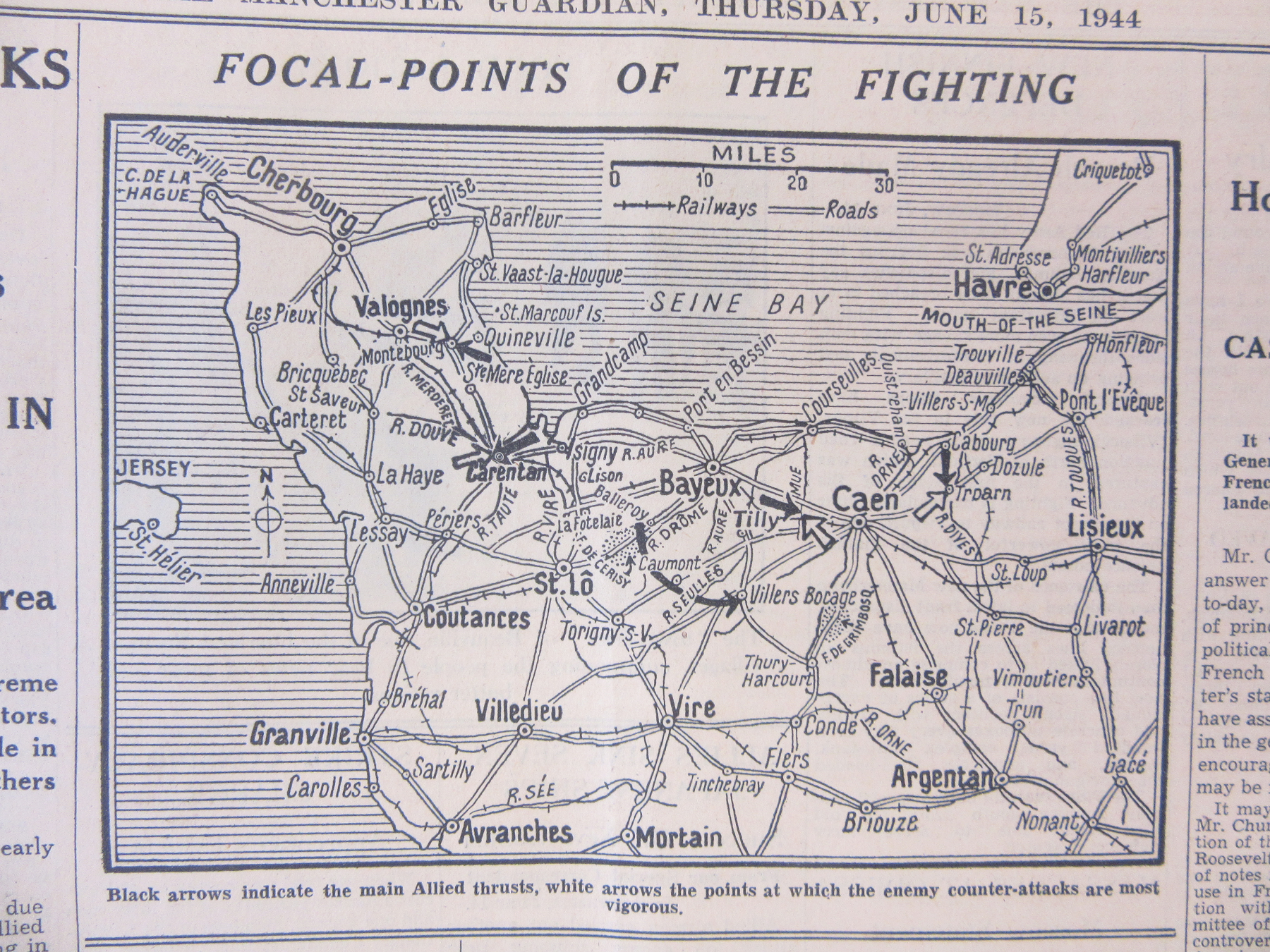