It’s always fascinating to look at early maps of the outskirts of cities, as the landscape has often undergone an incredible transformation. This map of the parish of St Pancras in London is a wonderful example. Made 215 years ago in 1804, it shows the parish as an elongated shape stretching north from what is now part of London’s crowded West End. The first extract here shows part of the northern sheet. 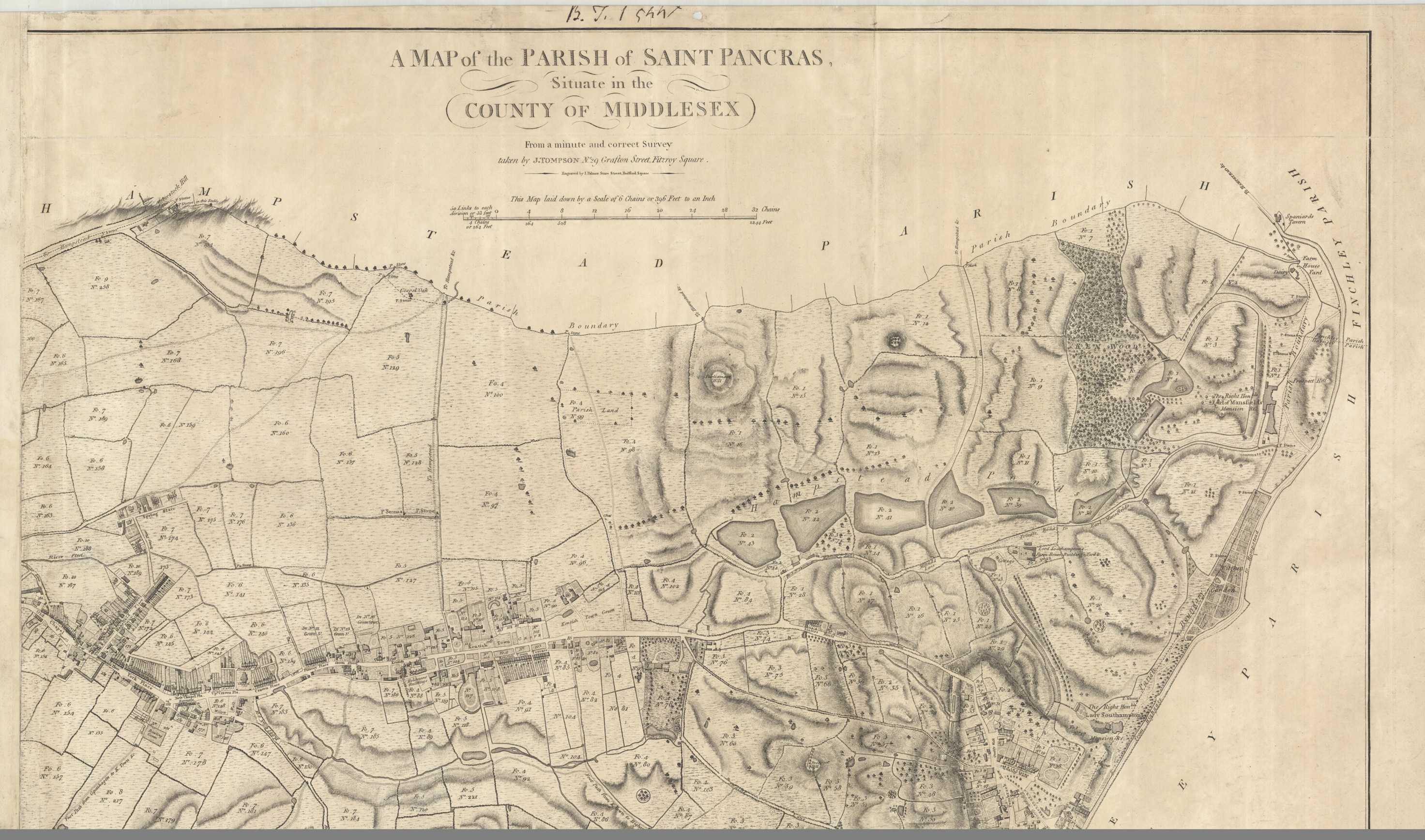 The map is on 2 sheets oriented with west (approximately) at the top. Although north orientation was fairly standard by 1804, it’s not unusual for large scale local maps to be oriented in whichever way most conveniently fits the shape of the paper. The southern extremity of the parish is the junction between Tottenham Court Road and Oxford Street (now the site of Tottenham Court Road tube station) in the west, and Clerkenwell in the east. The streets of Bloomsbury are already densely built up but north of what is now Euston Road is mainly open fields. Camden and Kentish town are separate villages on the main road out of London. The canal, of course, was yet to come and the mainline railway stations that dominate the area now were far in the future. The extract below shows the area now occupied by St Pancras and Kings Cross stations, and the British Library; the main road running from top to bottom is now the Euston Road. 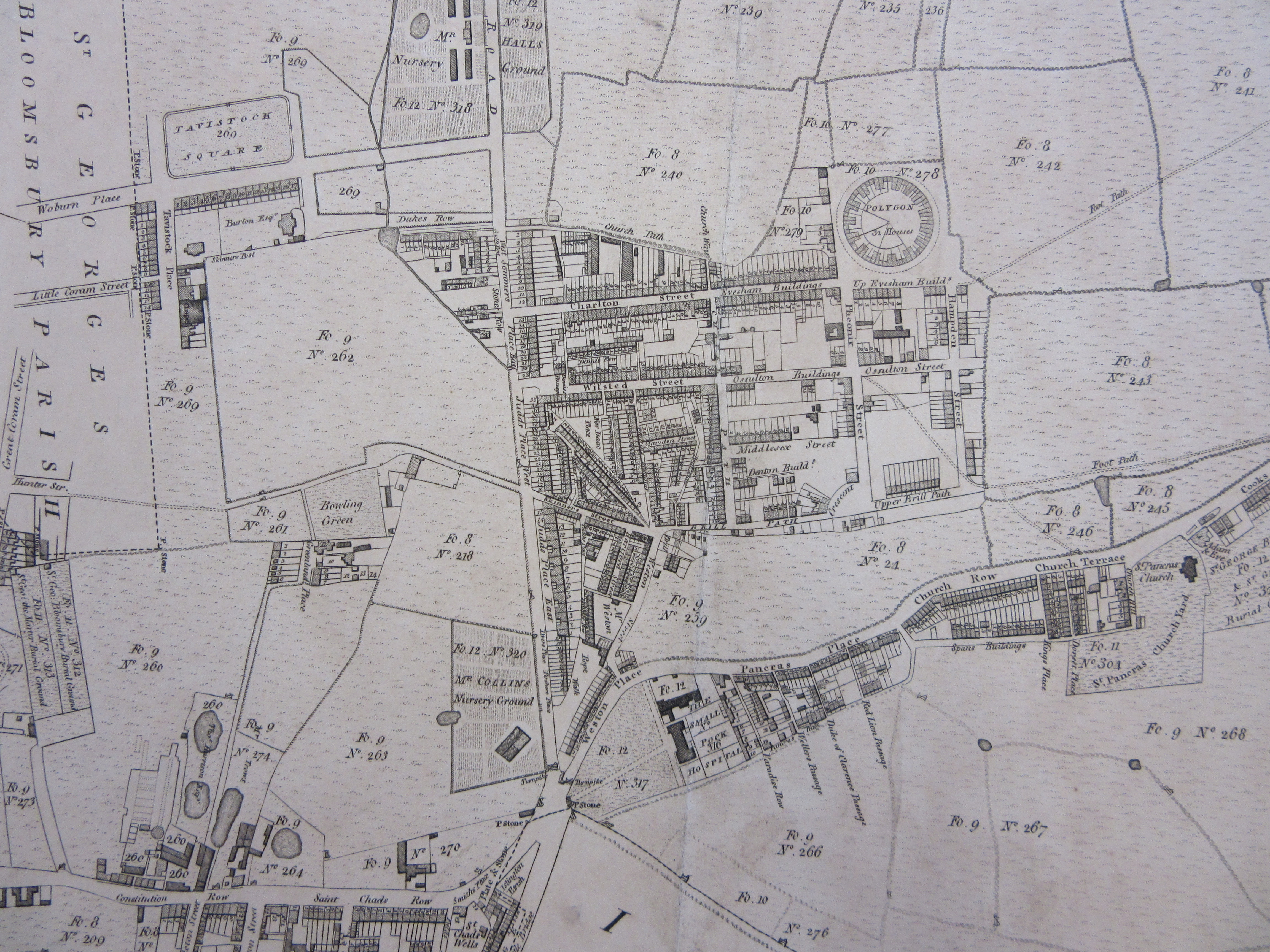 It’s also interesting to see the things that remain, or have left tangible traces. The Polygon, a then recent development of houses  in a circle facing inwards, was fairly recently built when this map was made; its name survives in Polygon Road nowadays. The Royal Veterinary College to the east of Camden was already established and is still there. On the northern sheet,  the more hilly landscape towards Hampstead and Highgate is represented by hachuring; the distinctive shape of the line of ponds across Hampstead Heath hasn’t changed much since 1804. Kenwood House, then the seat of the Earl of Mansfield and recently remodelled, still stands surrounded by its parkland, now managed by English Heritage. The oak tree under which people would gather to hear gospel readings is marked; Gospel Oak is still the name of a London district and a train station. 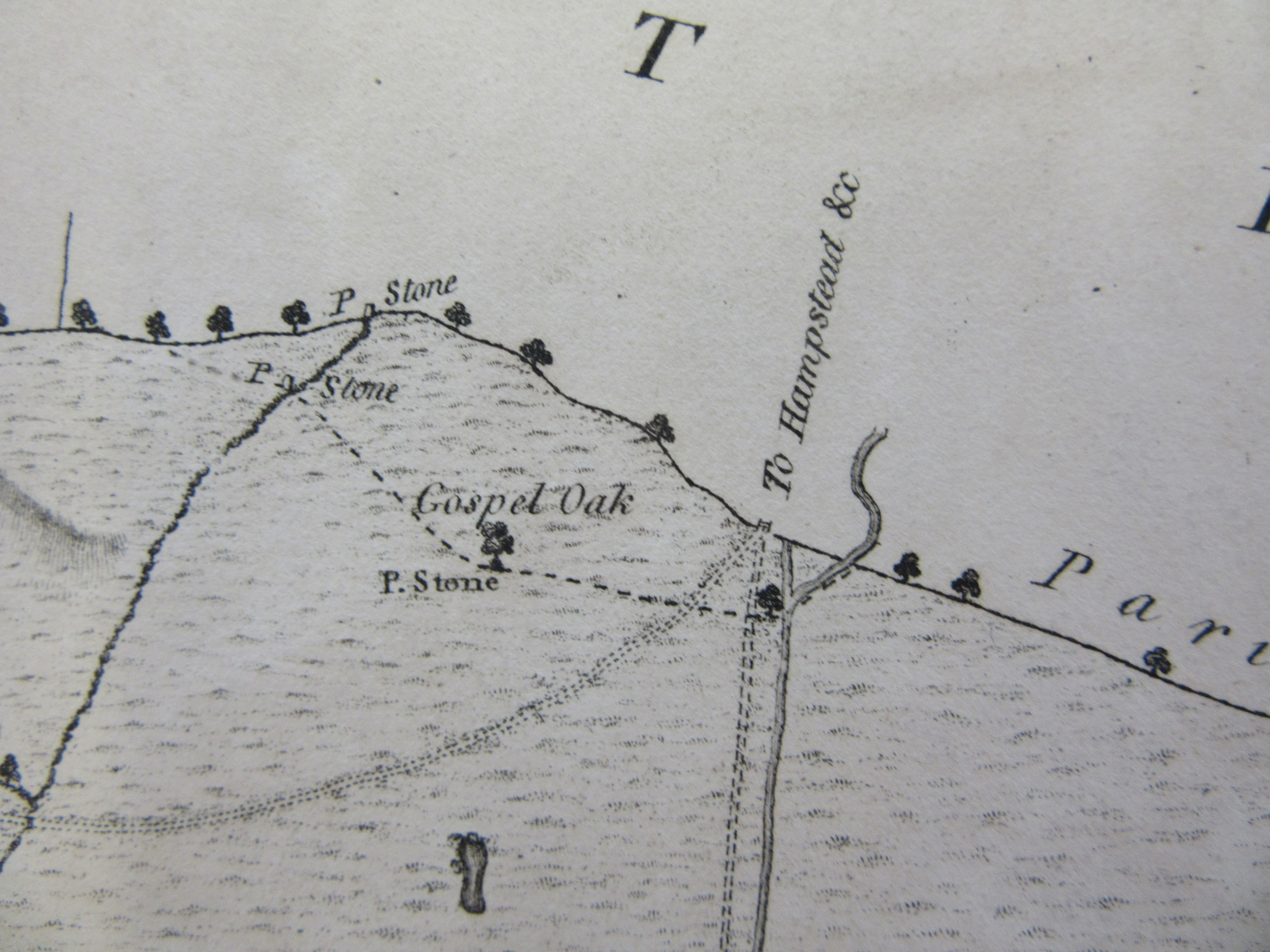 The map is very detailed and finely engraved; the accompanying written survey, or terrier book, explains that the mapmaker, John Tompson (also described elsewhere as Thompson or Tomson) had made it under the patronage of landowners who had property in the parish, “at the expence of upwards of three years labour.” The terrier is very thorough, listing the landowners, and identifying the individual land parcels (numbered on the map) by their use and area. All individual streets are described and their buildings listed. This is an exceptionally detailed record of an area now transformed almost beyond recognition.

Created by the artist and cartographer MacDonald Gill this map is one of the most aesthetically pleasing items in the collection. 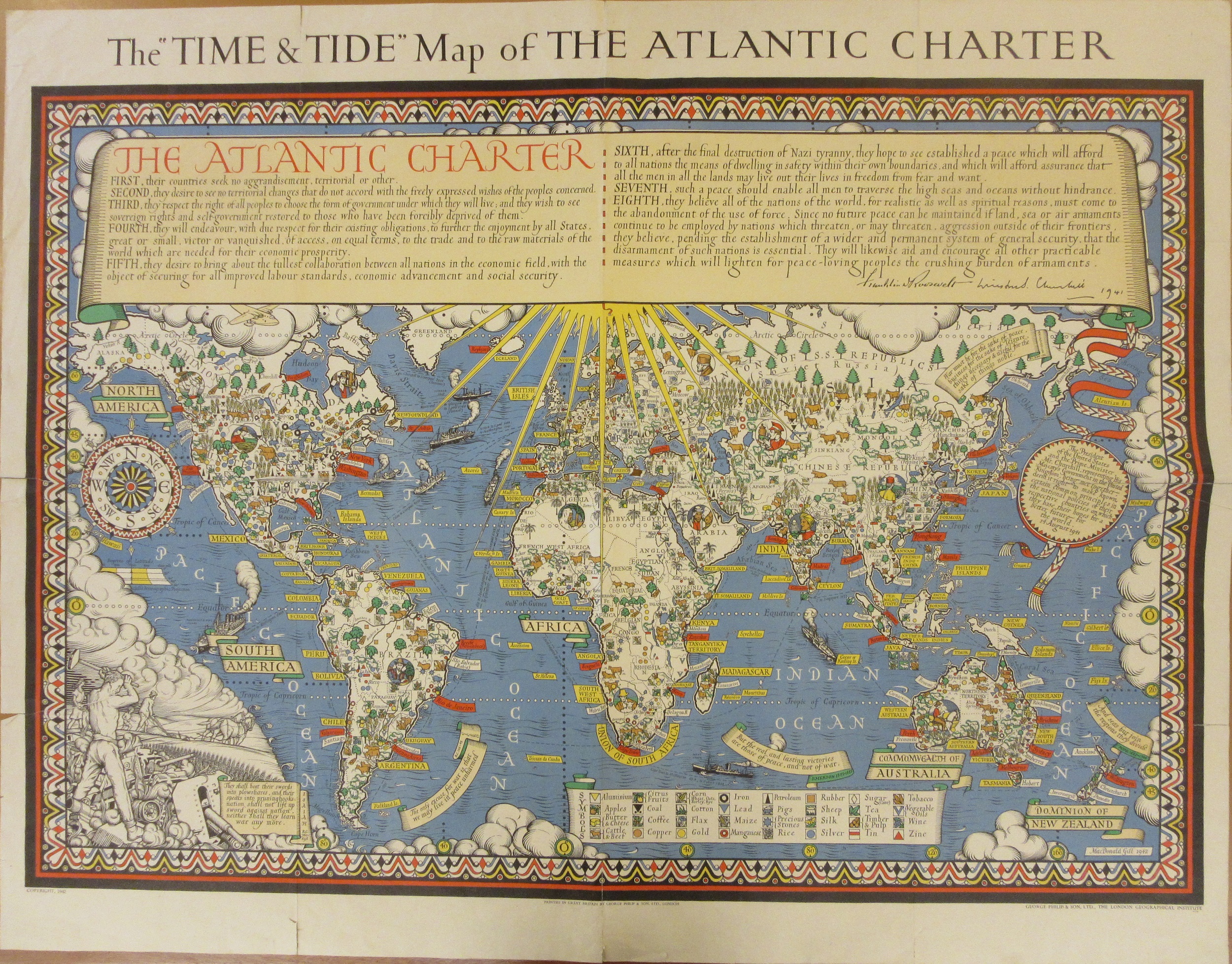 Tide and Time was a weekly political and literary magazine starting in 1920.

Not only is it visually stunning the map is also an important historical document. Created in 1941 to promote the post-war aims of the Allied Countries by Sir Winston Churchill and President Franklin D. Roosevelt the charter committed participating nations to 8 points, all of which are stated on the map. This is an idealized view of the World, with agriculture and local industry prominent. Despite the state of the War in 1942 Germany is portrayed without any hint of hostilities currently taking place but is instead basking in the rays of the Sun like any other nation. 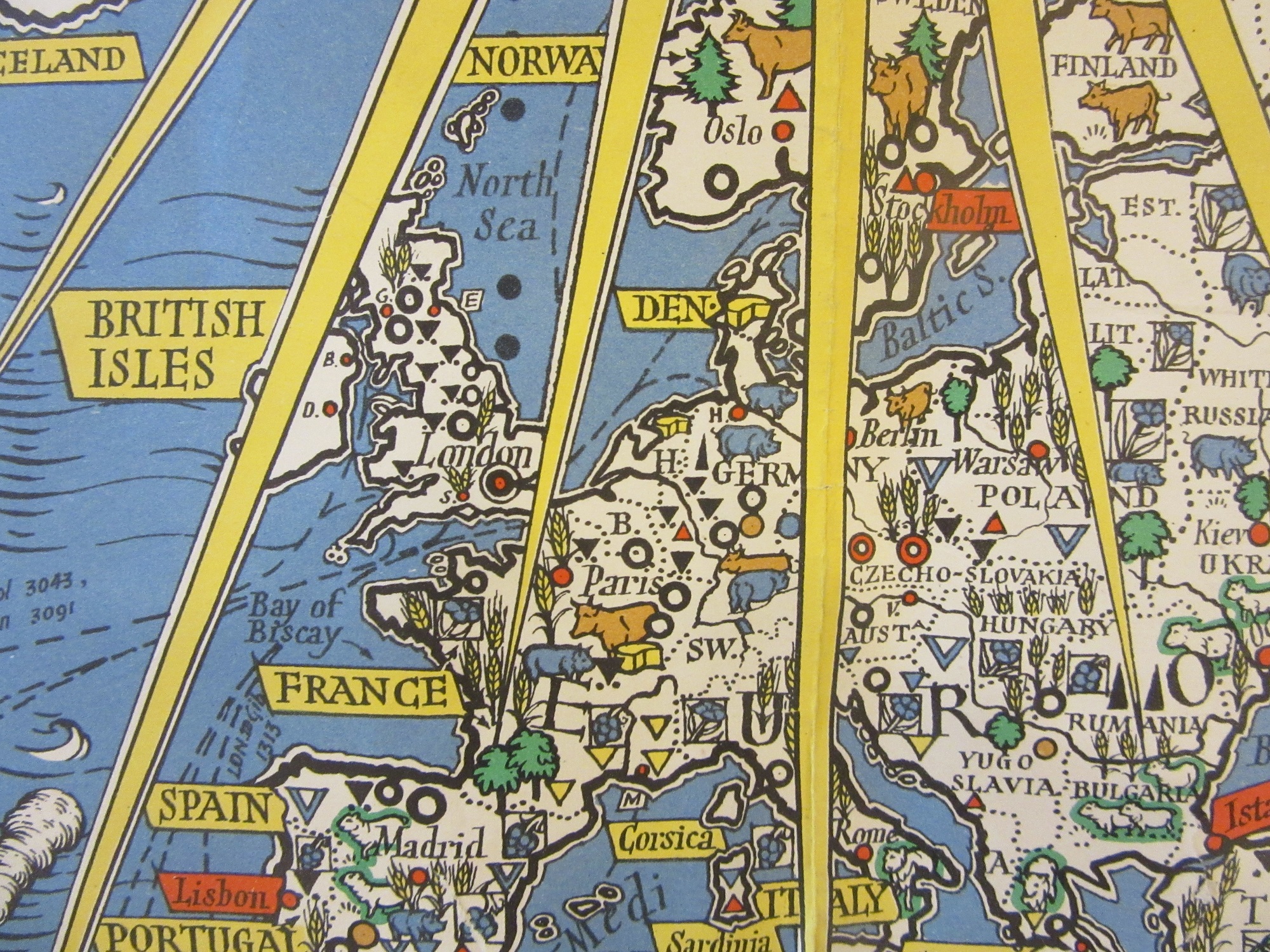 In the bottom corner is a quote from the Book of Isiah setting out the hopes and ambitions of the signatories to the Charter. Swords have been replaced by weapons of the War then taking place but the image powerfully portrays the sentiment intended. 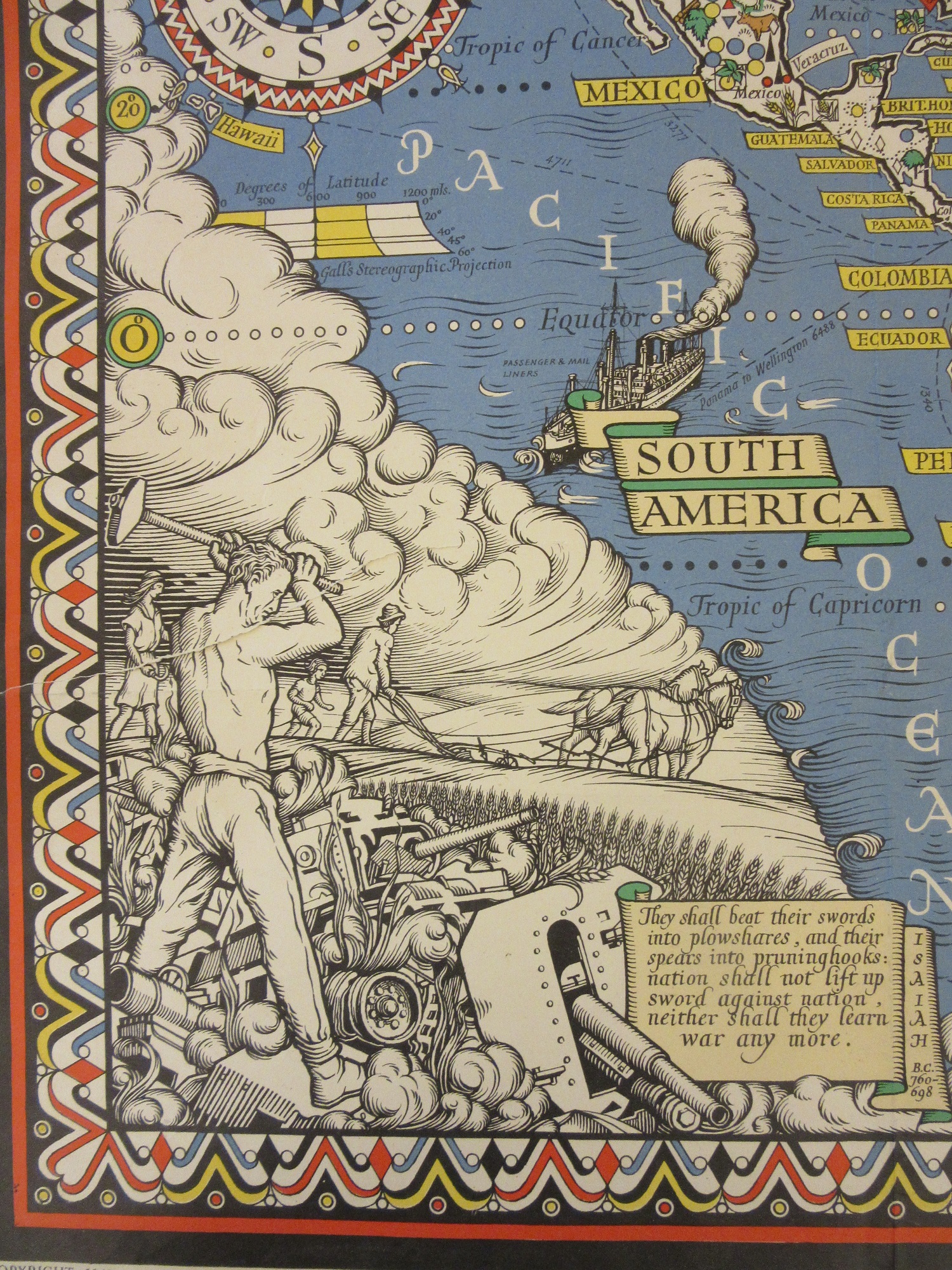 Gill created a number of maps, including one of the earliest of the London Underground, but also has a link with the First World War. He designed the font used on Commonwealth Cemetery gravestones.

Churchill and Roosevelt met off the coast of Newfoundland in 1941, with Churchill traveling across the Atlantic on board HMS Prince of Wales. The journalist H.V. Morton accompanied him and wrote a book about the meeting between the two leaders that led to the creation of the Charter. 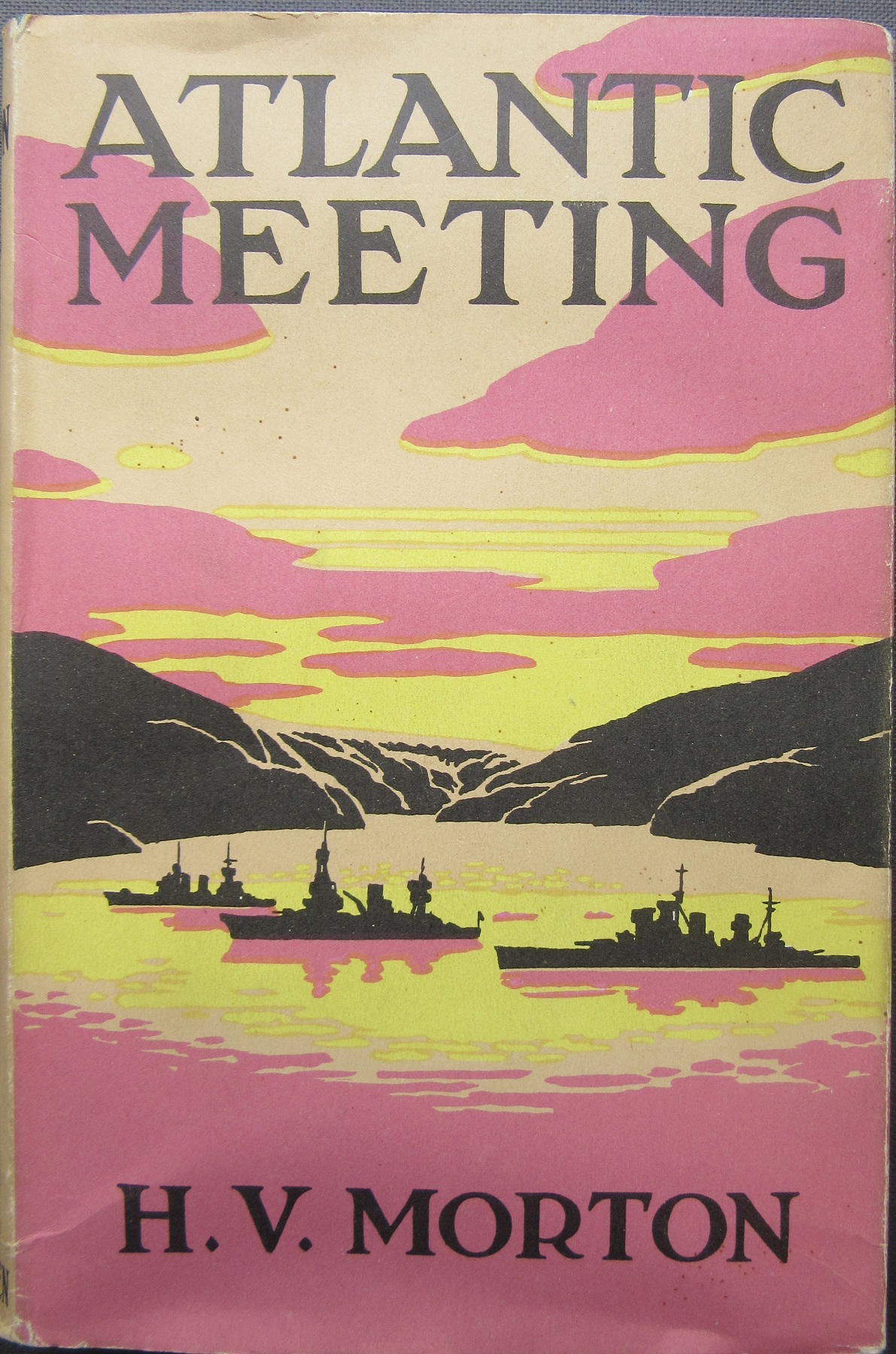 Morton’s book included a map of the route on the inside cover. Morton was a journalist with the Daily Express in 1923 when he reported on the opening of the tomb of Tutankhamun in the Valley of the Kings before The Times, who had paid for exclusive rights to the expedition. 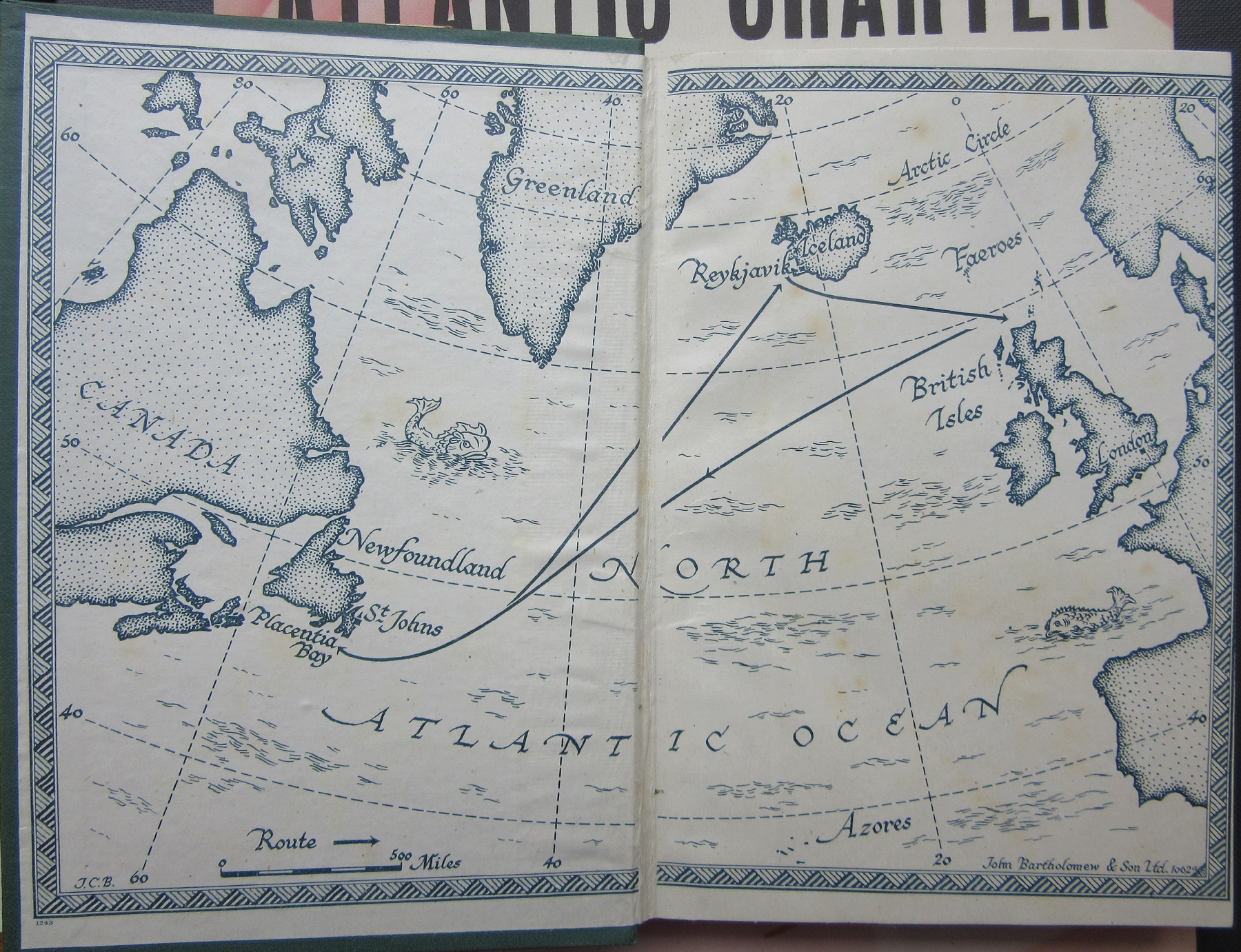 An earlier blog post (July 2015) features a map showing the voyages and journeys Sir Winston Churchill made while Prime Minister during the War which included in the top corner pictures of the ships and planes used, including the Prince Of Wales 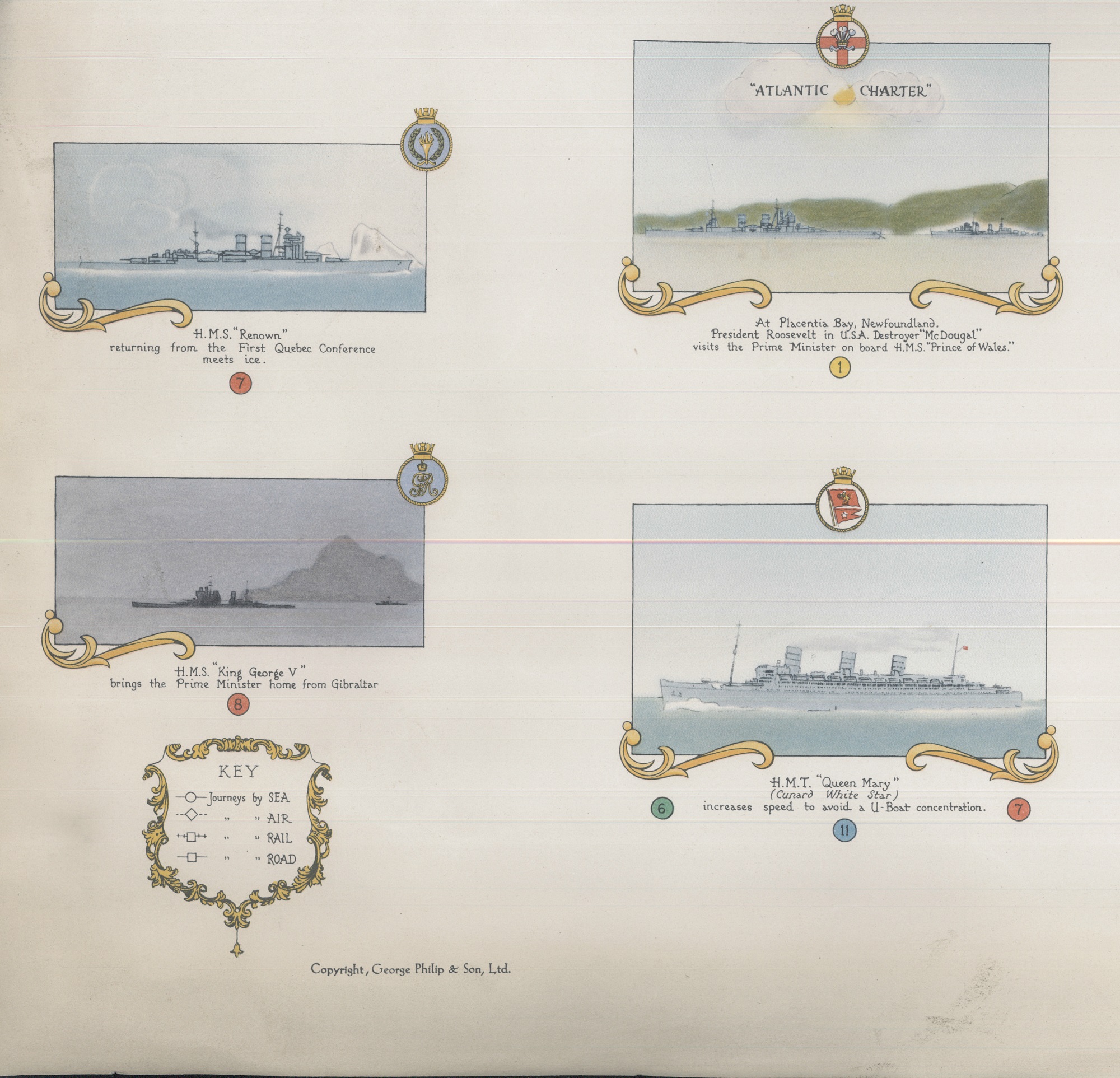 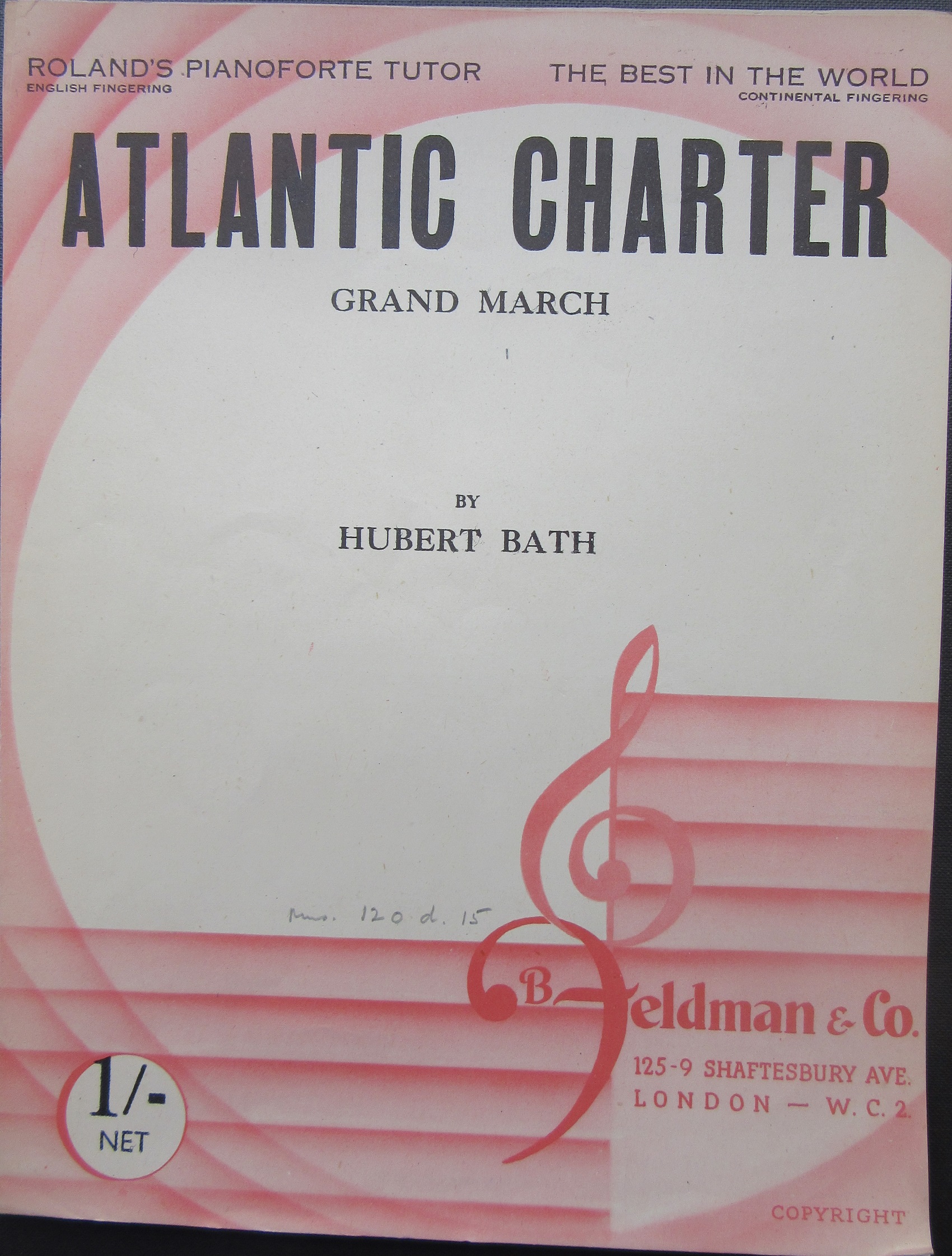