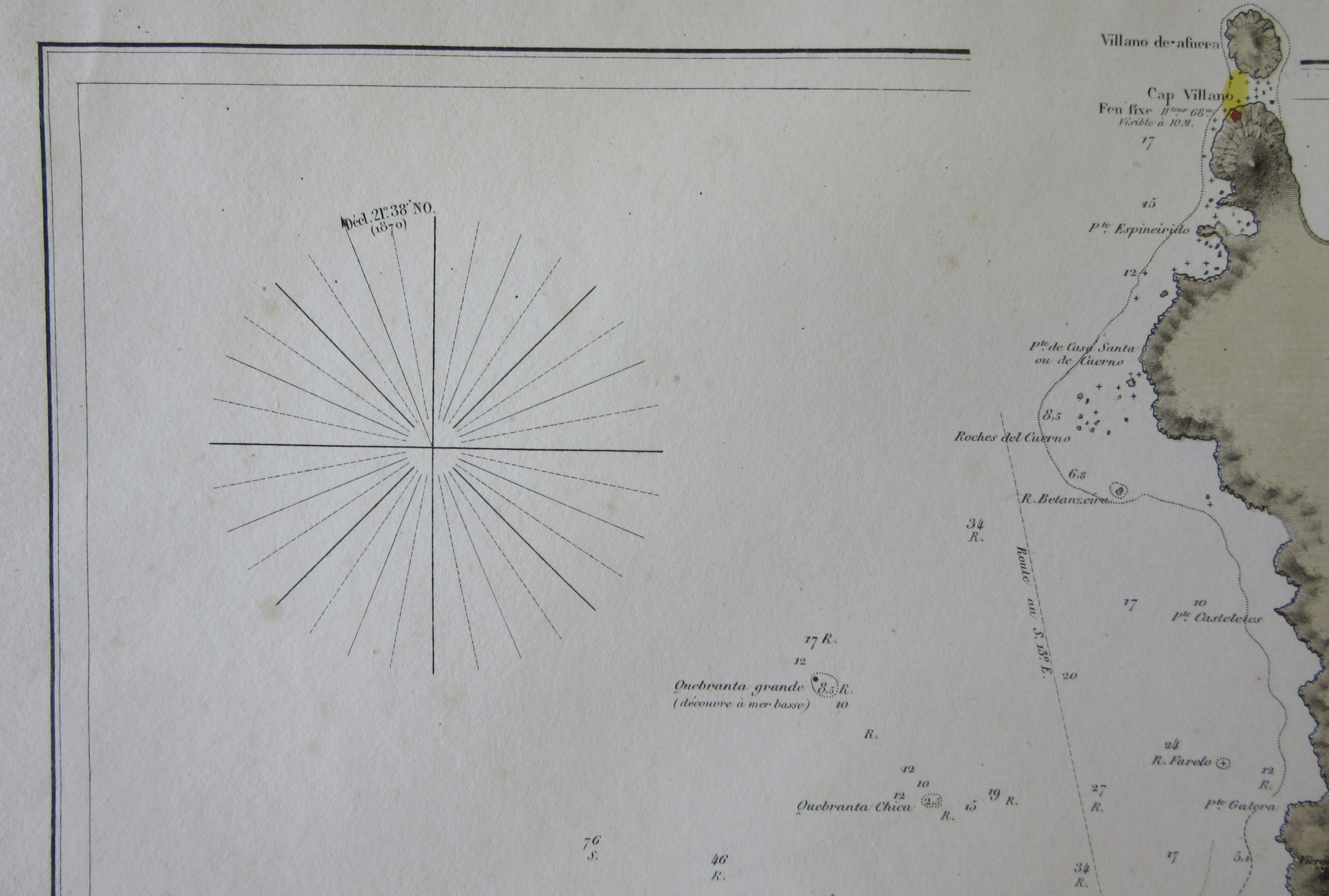 With the eruption of its volcano on the 26th of August 1883 the landscape of the island of Krakatoa changed in an instant. Over two thirds of the island disappeared in the explosion, 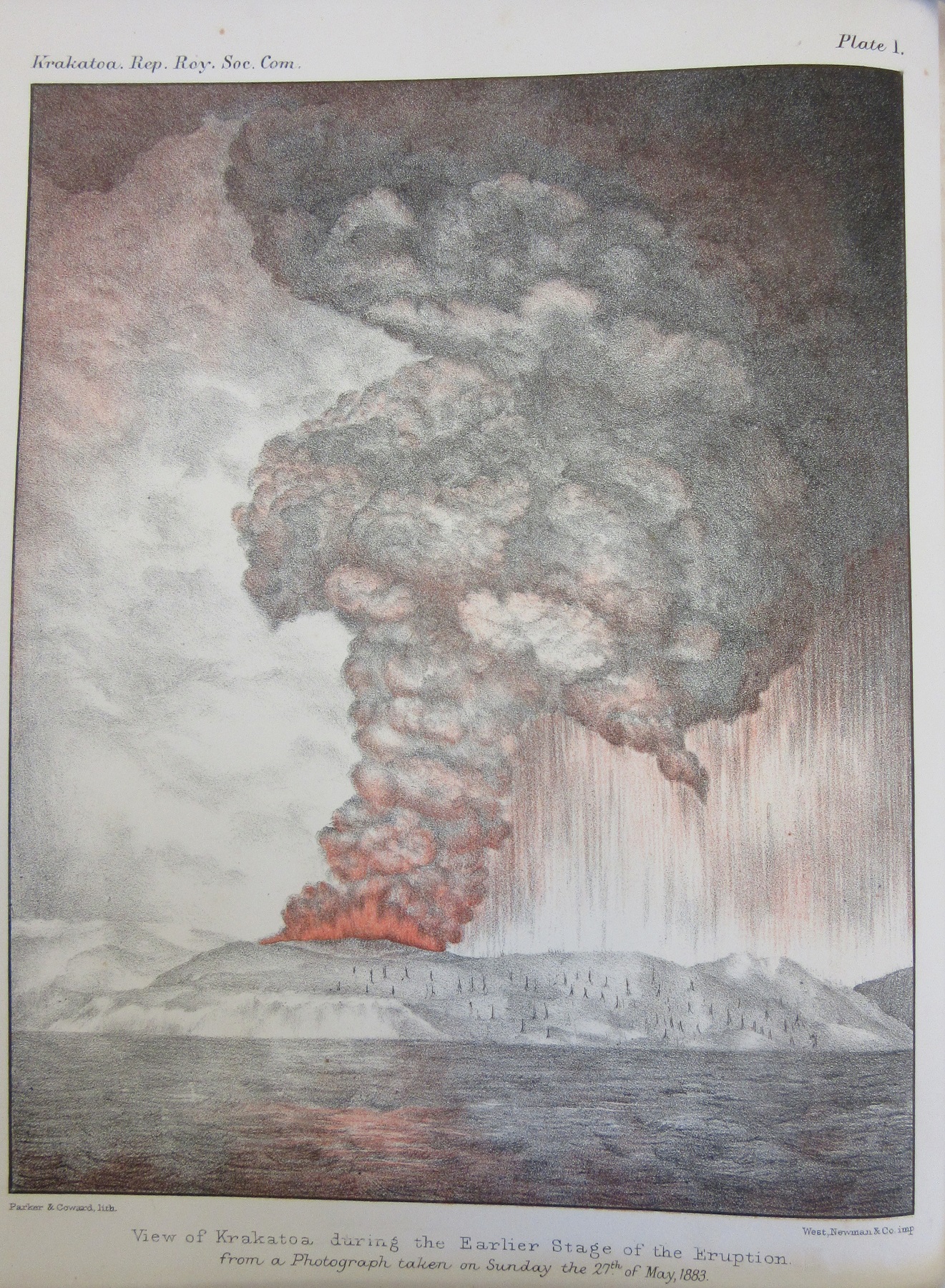 unleashing a tsunami that killed at least 36,000 people in the immediate area and created waves of sufficient power to register on tidal readings as far away as the English Channel. 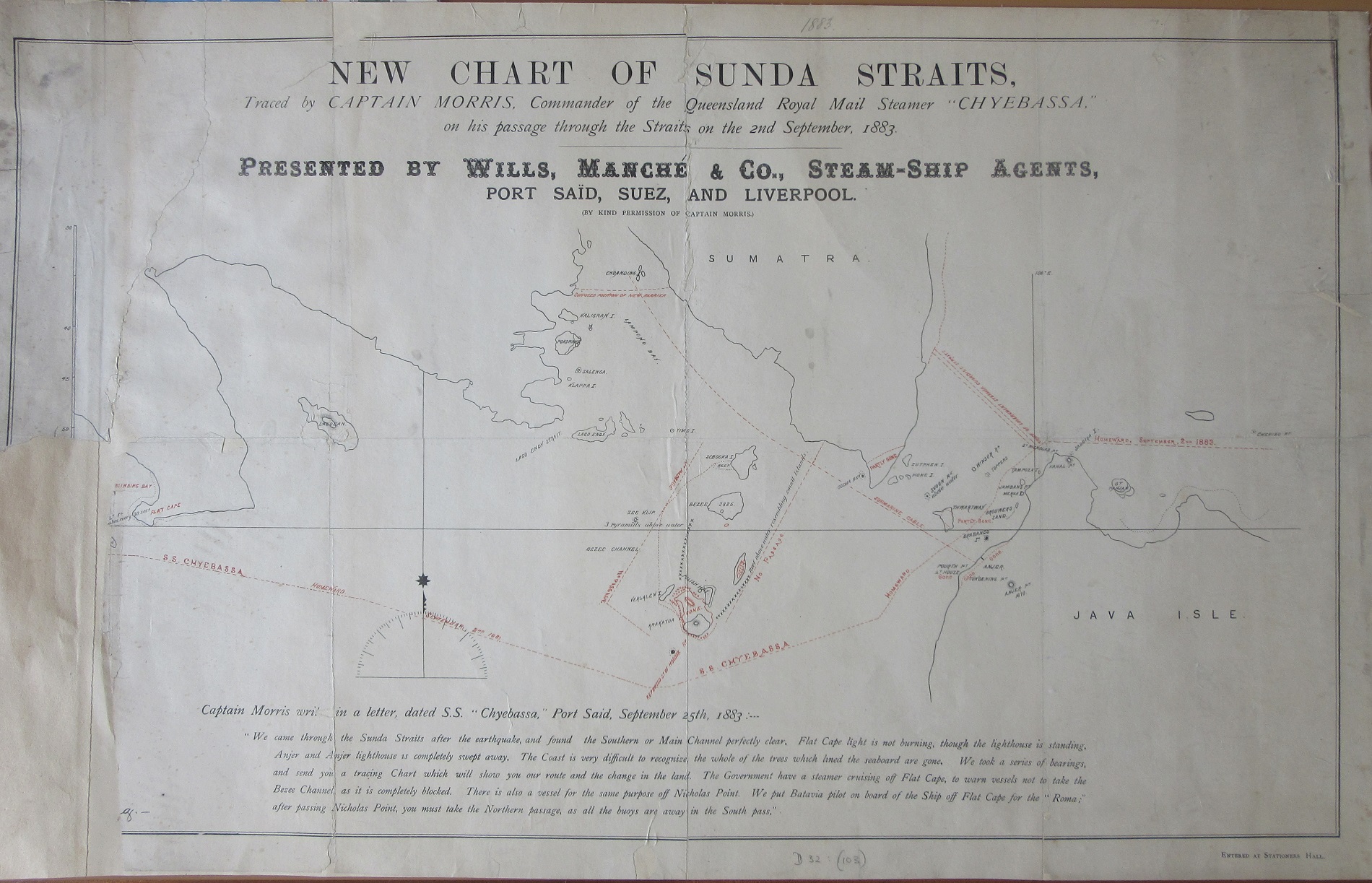 This map is a remarkable record of the changes caused by the eruption and subsequent tsunamis, made by Captain 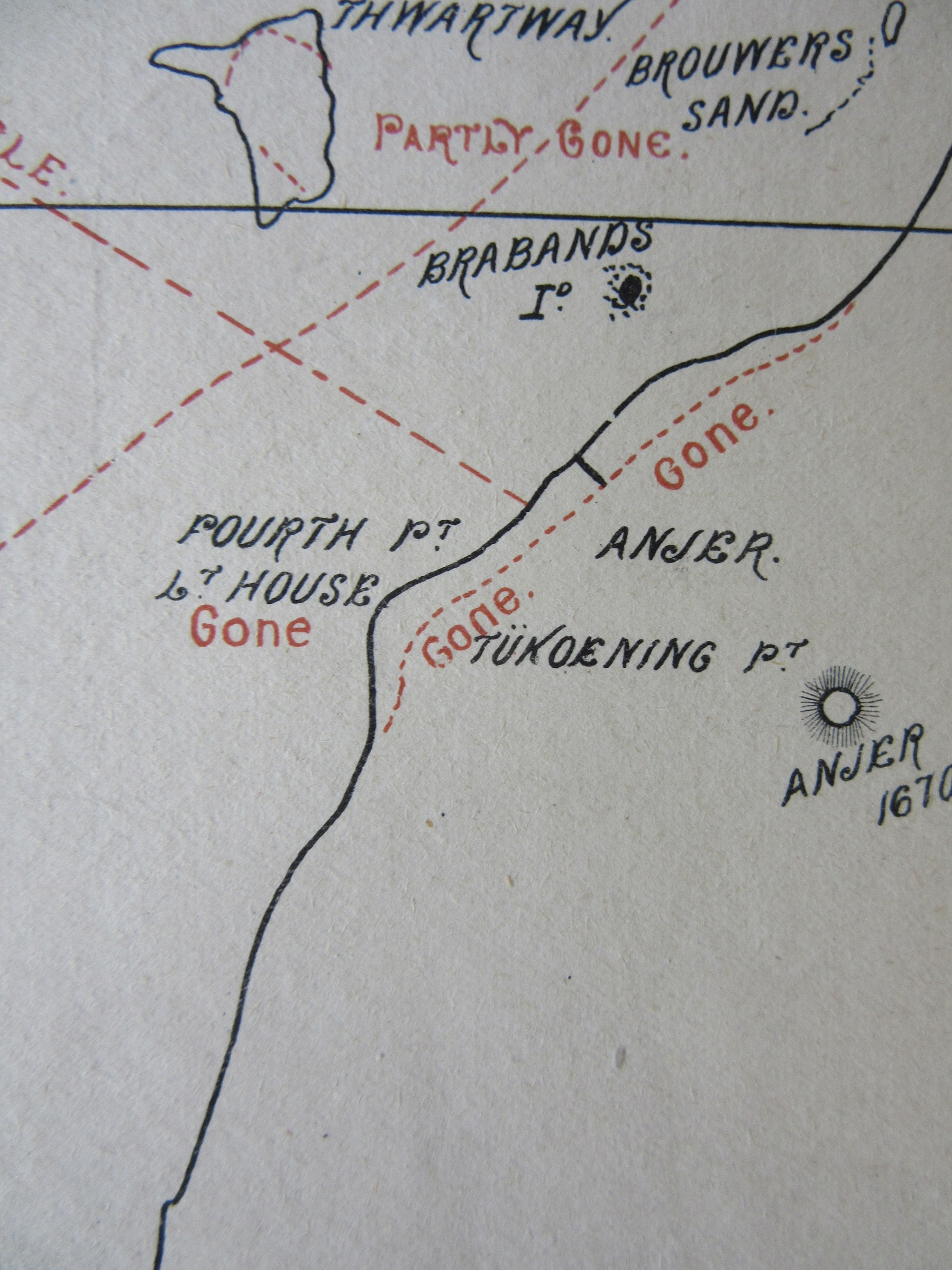 Morris of the Australian steam-ship ‘Chyebassa’ on the 2nd of September 1883, 136 years ago today. Morris states on the map how “We came through the Sunda Straits after the earthquake and found the Southern or Main Channnel perfectly clear. Flat Cape light is not burning, though the lighthouse is standing. Anjer and Anjer lighthouse is completely swept away [as can be seen in this extract from the map showing both the previous and post-eruption coastline]. The coast is very difficult to recognize, the whole of the trees which lined the shoreline are gone…The Government have a steamer cruising off Flat Cape, to warn vessels not to take the Bezee Channel, as it is completely blocked. There is also a vessel for the same purpose off Nicholas Point. We put Batavia [modern Jakarta] pilot on board the ship off Flat Cape for the “Roma”; after passing Nicholas Point, you must take the Northern passage, as all the buoys are away in the South pass”.

The explosion of Krakatoa was a truly global event, and news of the eruption was transmitted around the world via the telegraph cable (called on the map a submarine cable) which linked Java with the World by the cable laid through the Straits which connected Australia to London via Singapore. A message sent from Java could get to London in as little as three hours. Global in another way, as countries as far away as England and the United States felt the effects of Krakatoa in less violent ways. Sunsets were affected by the dust thrown up into the atmosphere and the remnants of the Tsunamis that swept the region were recorded on tidal gauges as far away as the English Channel while changes in weather patterns were registered in Los Angeles.

In 1888 the Royal Society of London produced a richly illustrated report, ‘The eruption of Krakatoa and subsequent phenomena’ (Vet A7 c.45) which gave detailed accounts, causes and the effects caused the eruption.  Included are watercolours of the sunsets over Chelsea 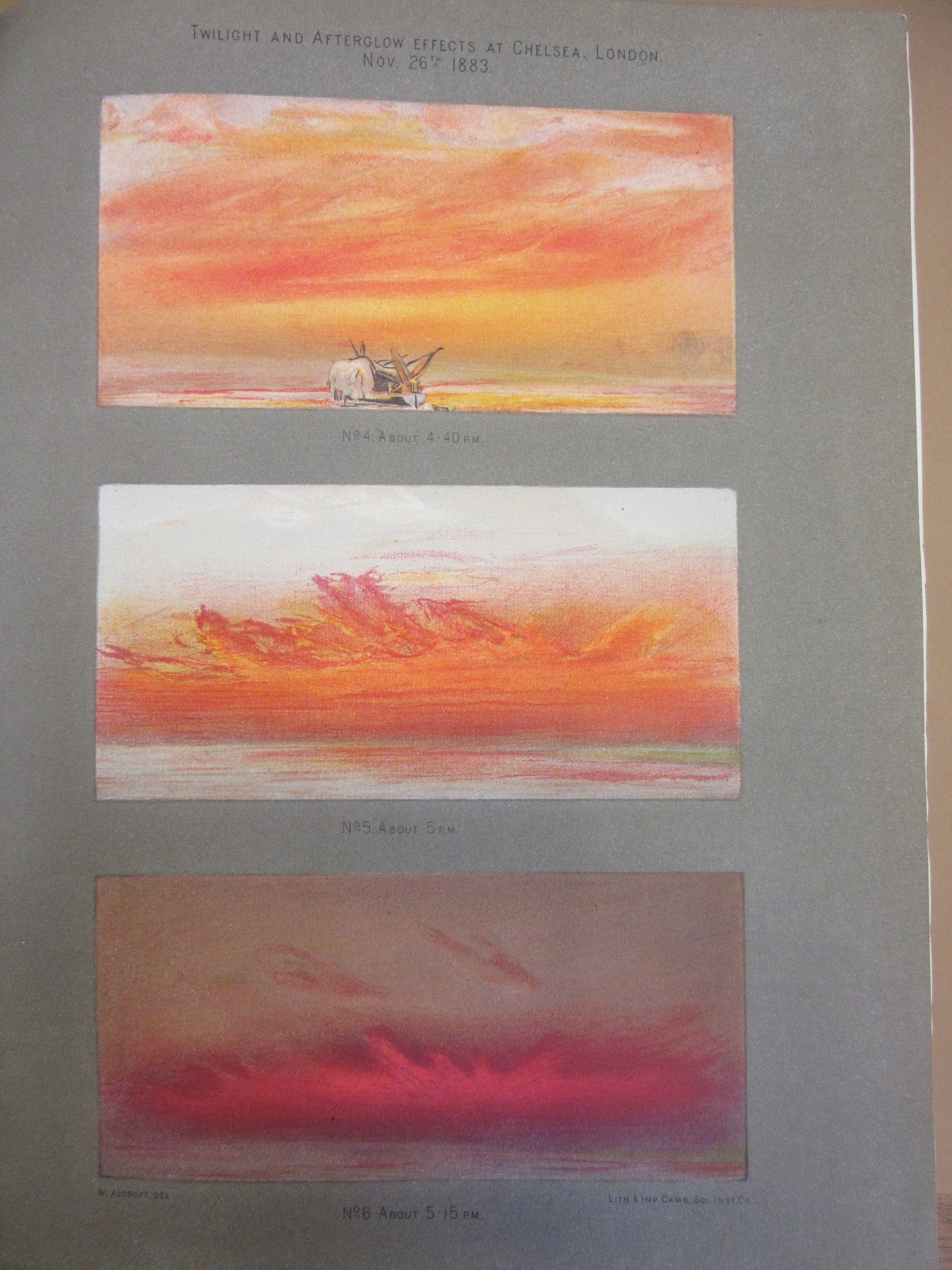 and a map of the reach of the waves caused by the explosion, that proved so devastating to those near the volcano, throughout the World 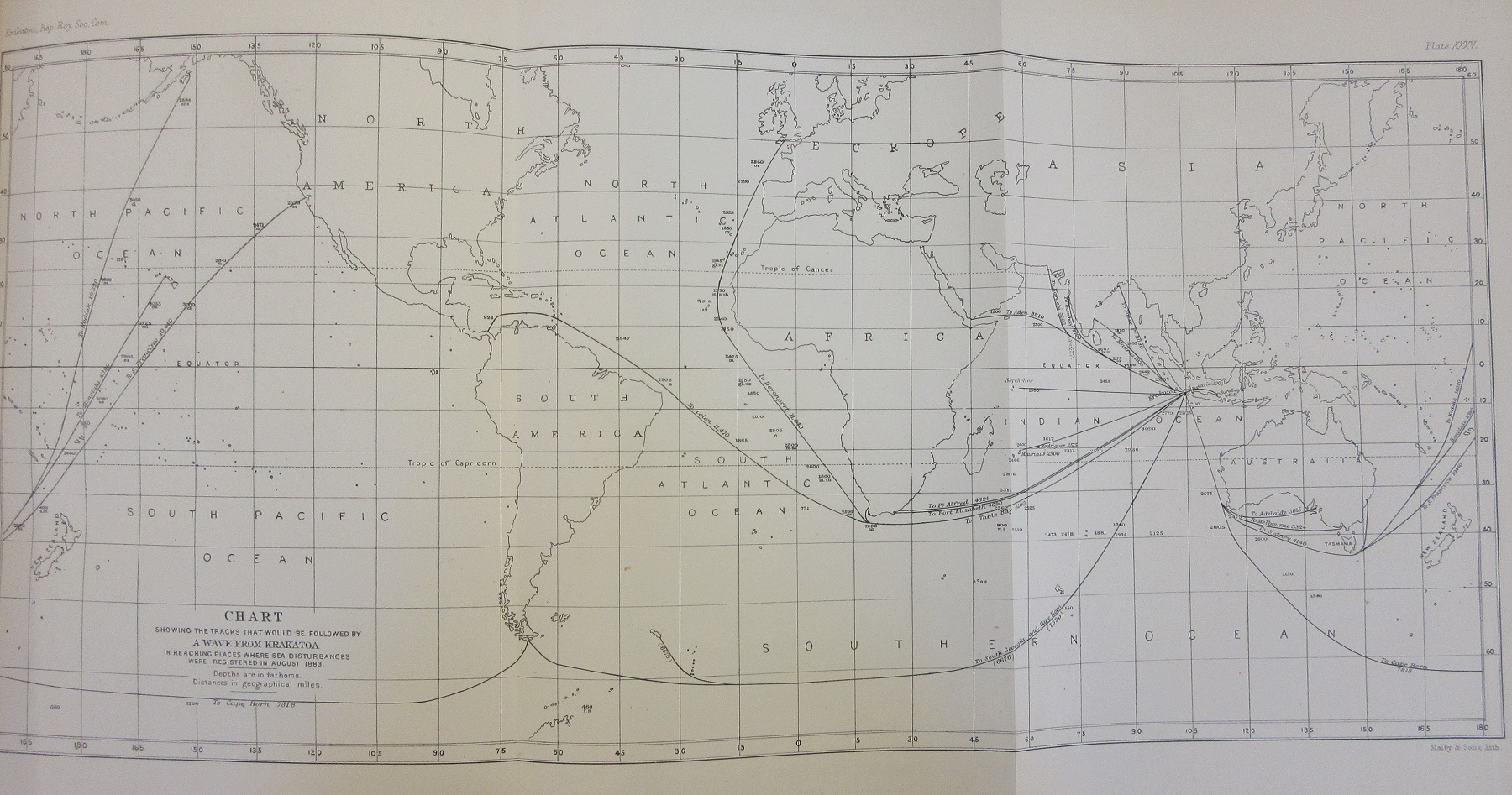 The introduction to the report gives some idea as to the confusion and damage to lives and property caused by Krakatoa.

‘ During the closing days of the month of August, 1883, the telegraph–cable from Batavia carried to Singapore and thence to every part of the civilised World the news of the terrible subterranean convulsion – one which in its destructive results in life and property, and in the startling character of the World-wide effects to which it gave rise, is perhaps without parallel in historic times.

As is usual in such cases, the first report of this tremendous  outburst of the volcanic forces appear to have been quite misleading and altogether unworthy of credence. Nor is this to be wondered at. The towns and villages along the shores of the Sunda Strait were, during the crisis of the eruption, enveloped in a terrible darkness, which lasted many hours, and, while thus obscured, were overwhelmed by a succession of great sea-waves; those who succeeded in saving their lives amid these appalling incidents were, it need scarcely be added, not in a position to make trustworthy observations upon the wonderful succession of phenomena occurring around them’.

Opposite this page is the illustration of the volcano at the top of this blog post.