This beautiful map of the Teign Estuary incorporates three different ways to show off the new bridge across the river linking the village of Shaldon with the important Devonshire port and seaside resort at Teignmouth. 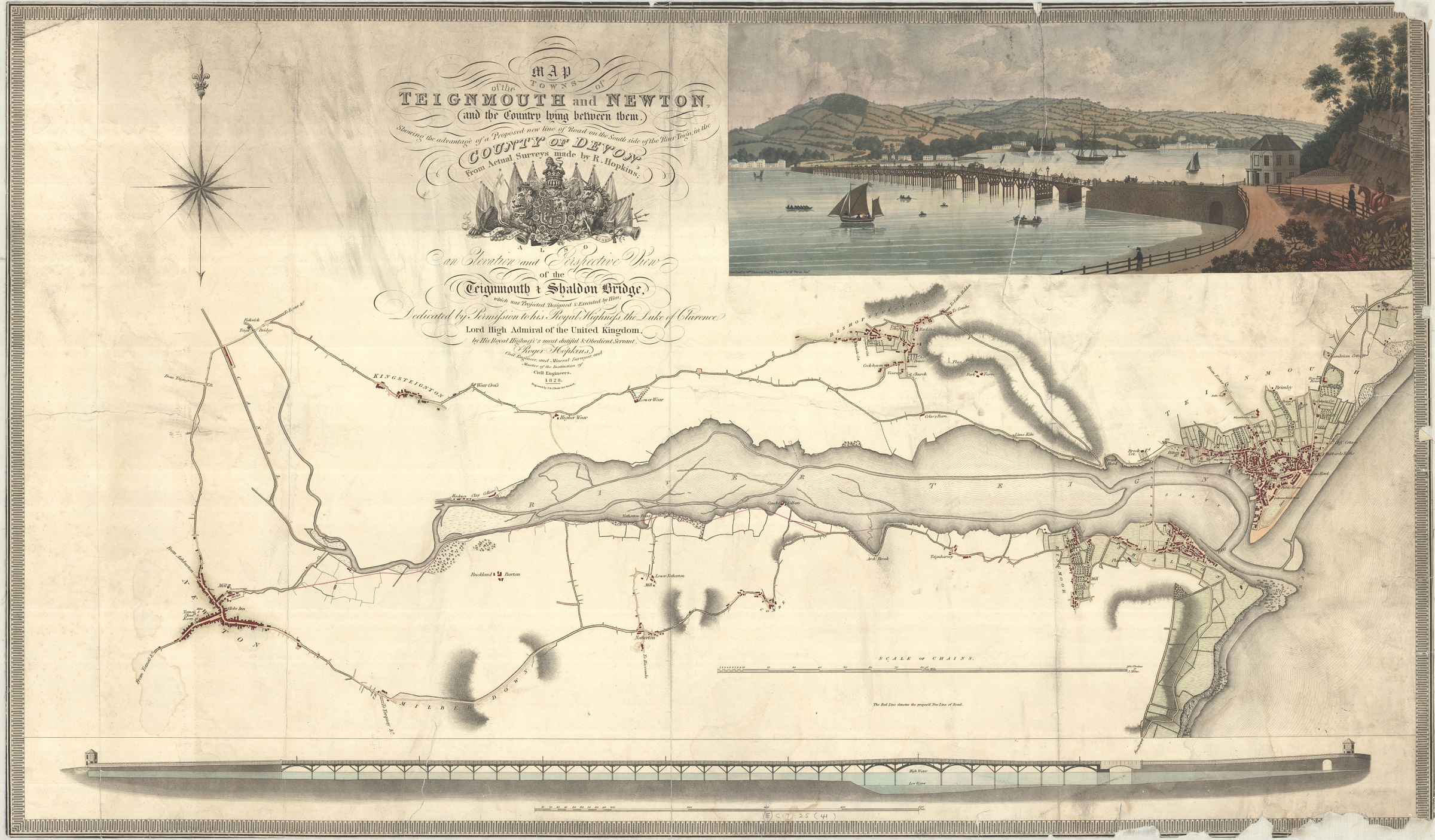 The bridge, completed the year before the map was published, was just over 1,670 feet long, making it the longest wooden bridge in the country at the time. A swing-bridge at the Teignmouth end allowed ships through to the estuary.

The map is a work of self-promotion, designed to show the route of a new road which had been proposed by Roger Hopkins, Civil Engineer and Mineral Surveyor, who designed and built the bridge and made the map. To show off Hopkins skills as an engineer and surveyor the bridge features prominently, not only on the map but both in a portrait

and then in profile; the former to show the beauty of the design within the context of the setting, the latter to show off the surveying and engineering skills of Hopkins.

In the title Hopkins reminds the viewer that it is he that ‘projected, designed and executed…’ the bridge and then goes on, as his ‘most humble servant’, to dedicate the map to the Duke of Clarence, Lord High Admiral of the United Kingdom. As can be imagined the Lord High Admiral was the head of the Royal Navy and the holder was usually drawn from the Royal Family (the current High Admiral is Prince Philip). Three years after the publication of the map the Duke of Clarence became William the IV.

By showing evidence of his surveying and engineering skills with the views of his bridge Hopkins sets out why he is qualified to propose his new road, despite there already being a road from Newton (now Newton Abbot) to Shaldon. Hopkins road would be far more direct, transporting the produce from the mills in the town to the port at Teignmouth. Despite the beauty and surveying and engraving skills on show Hopkins was ultimately unsuccessful, the road only existed on paper and twenty years later the railway came to South Devon, and Newton Abbot was linked to Teignmouth along the northern side of the Teign.

Map of the towns of Teignmouth and Newton, and the country lying between them, showing the advantage of a proposed… road… from actual survey made by R. Hopkins, 1828 (E) C17:25 (41)

Engravers can be the unsung heroes or heroines of the map world. Until the nineteenth century, virtually all printed maps were produced by engraving the map on a sheet of copper – or later on, steel – as a mirror image of how the finished map would look. The plate was then inked and the image printed onto a sheet of paper in a printing press. This was incredibly skilled work, but often only very discreetly acknowledged, the engraver’s name appearing in tiny, modest letters in the bottom margin. 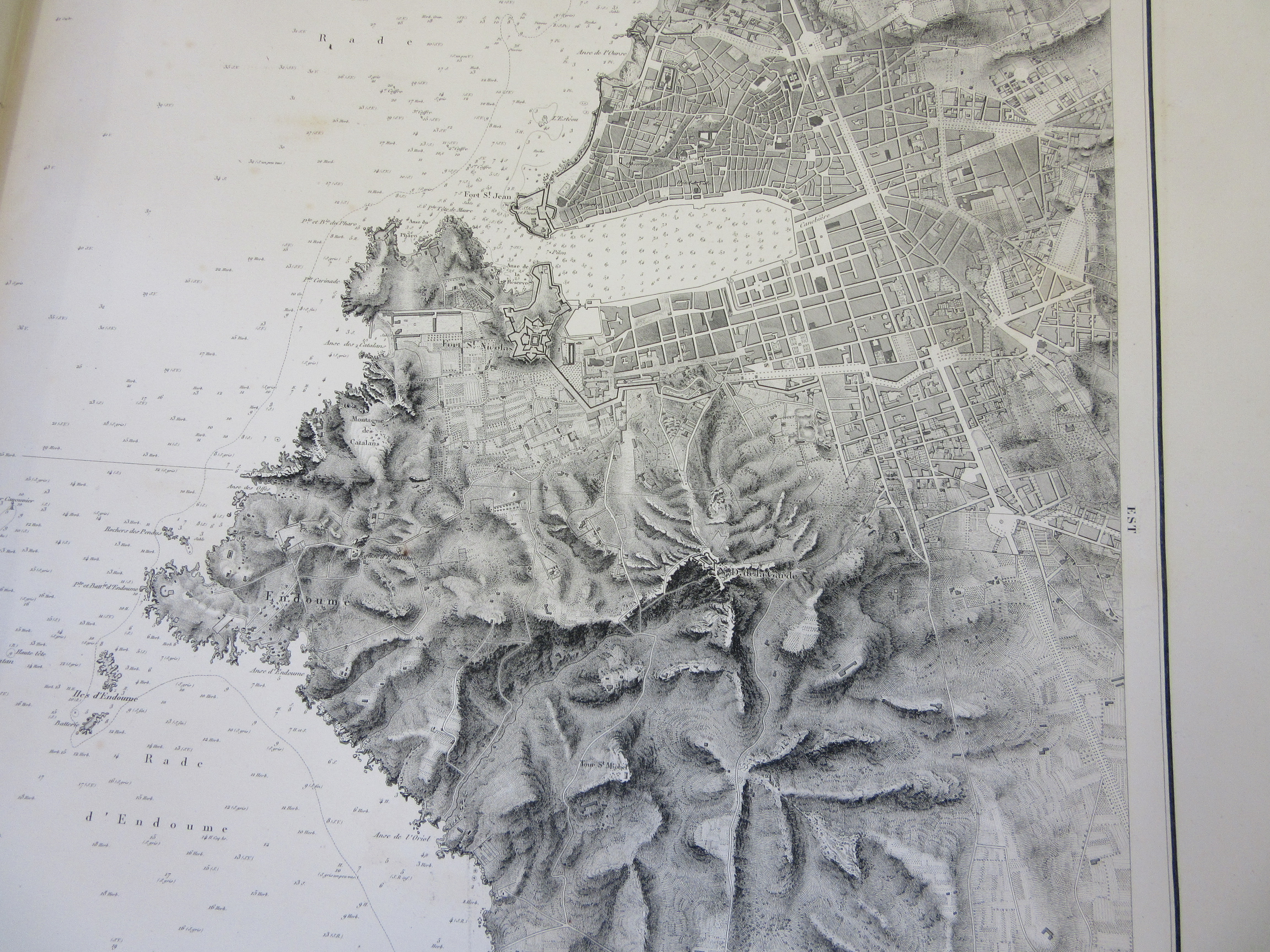 While cataloguing a large collection of nineteenth century French sea charts I have encountered some exceptional engravers. One we know only by his surname: Chassant, working in Paris from the late 1830s into the 1860s, was arguably wasted on sea charts. His dramatic portrayal of land relief using hachuring is very striking, as can be seen from this chart showing the old port of  Marseille and the rugged hills to the south in 1845.

When cataloguing these maps we always want to give the engravers their due, but identifying exactly who was responsible for a particular map can be challenging. The case of the Halls was discussed in a recent post – there were possibly quite a few women involved in early engraving. Mme Fontaine, a Paris based engraver of the 1860s and ’70s, is credited on her work simply as “Fontaine”, with no first name or title; research has revealed only that she was a female engraver who specialised in portraying large areas of water. 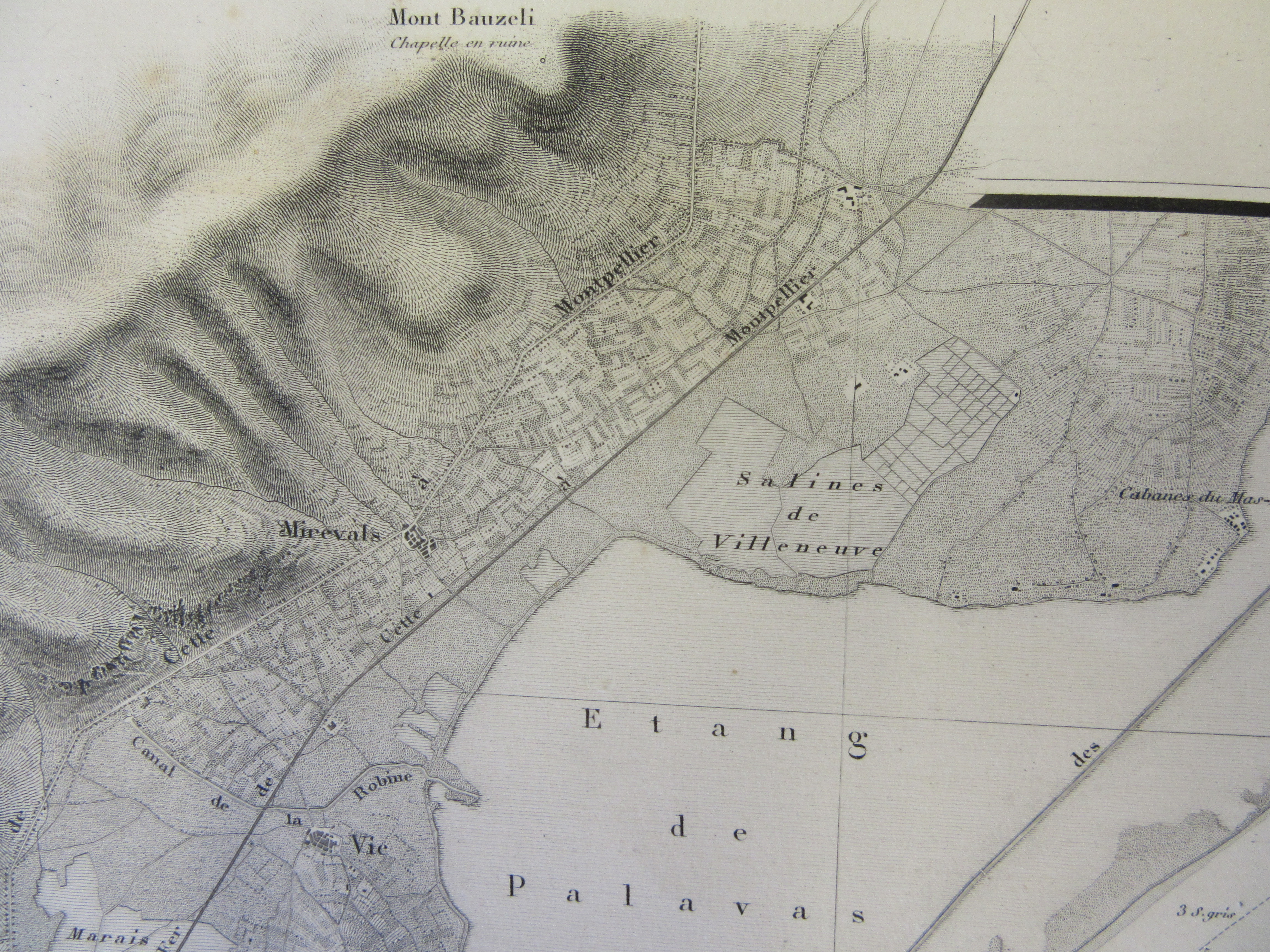 Around the same time, an engraver called C.E. Collin was also working on charts for the French Dépôt-général de la marine. Engraving was sometimes a family business, and this can make it harder to work out who engraved a particular map. This C.E. Collin appears to have been the youngest of three engravers called Charles Etienne Collin who produced charts for the Dépôt (as well as some other works) between 1789 and the 1870s.  The oldest one usually signed himself “E. Collin”, although he is also also believed to have had the given name Charles. In 1821, a two sheet chart appeared, of which one sheet was described as being “gravé par E. Collin” and the other “par E. Collin père”.  There is some overlap of the map area on the 2 sheets and differences in style suggest that they were made by different engravers. It was unusual for the older E. Collin to call himself “E. Collin père”, so perhaps this was an early collaboration with his son.  In 1829 the younger E. Collin took a different approach, engraving a chart and signing it “gravé par C.E. Collin fils.” Was this yet another young engraving Collin, or was he inconsistent in the use of his initials?  E. Collin père is generally supposed to be be Charles Etienne Collin; perhaps he disliked or rarely used his first name, and his son followed suit?

The second Collin continued to engrave charts into the 1830s. From the late 1840s a third C.E. Collin appears, and he was active into the 1870s. He was probably a grandson or nephew of the first Collin, but it is difficult to be sure exactly where one person’s work stops and the next one begins. Or why they couldn’t come up with a wider range of given names. The third Collin was an exceptionally fine engraver and his charts are really beautiful; one is represented above. In particular, some of his sea charts show a remarkable degree of detail for the land; in the chart above, the patchwork of fields, and even the approximate layout of small villages can be seen. In both these cases, the land information shown would be of use to sailors, helping them to spot landmarks from out at sea. It is also a valuable record of a rural stretch of coast over 150 years ago, since transformed by the growth of the city of Montpellier.