Joachim Friederichs map of London takes an interesting approach to measuring distances. A series of circles covers the whole map, each one representing ½ a mile in diameter, making it possible, according to the cartographer, to ‘merely count the number of circles between one point and another you have at once the distance travelled’. 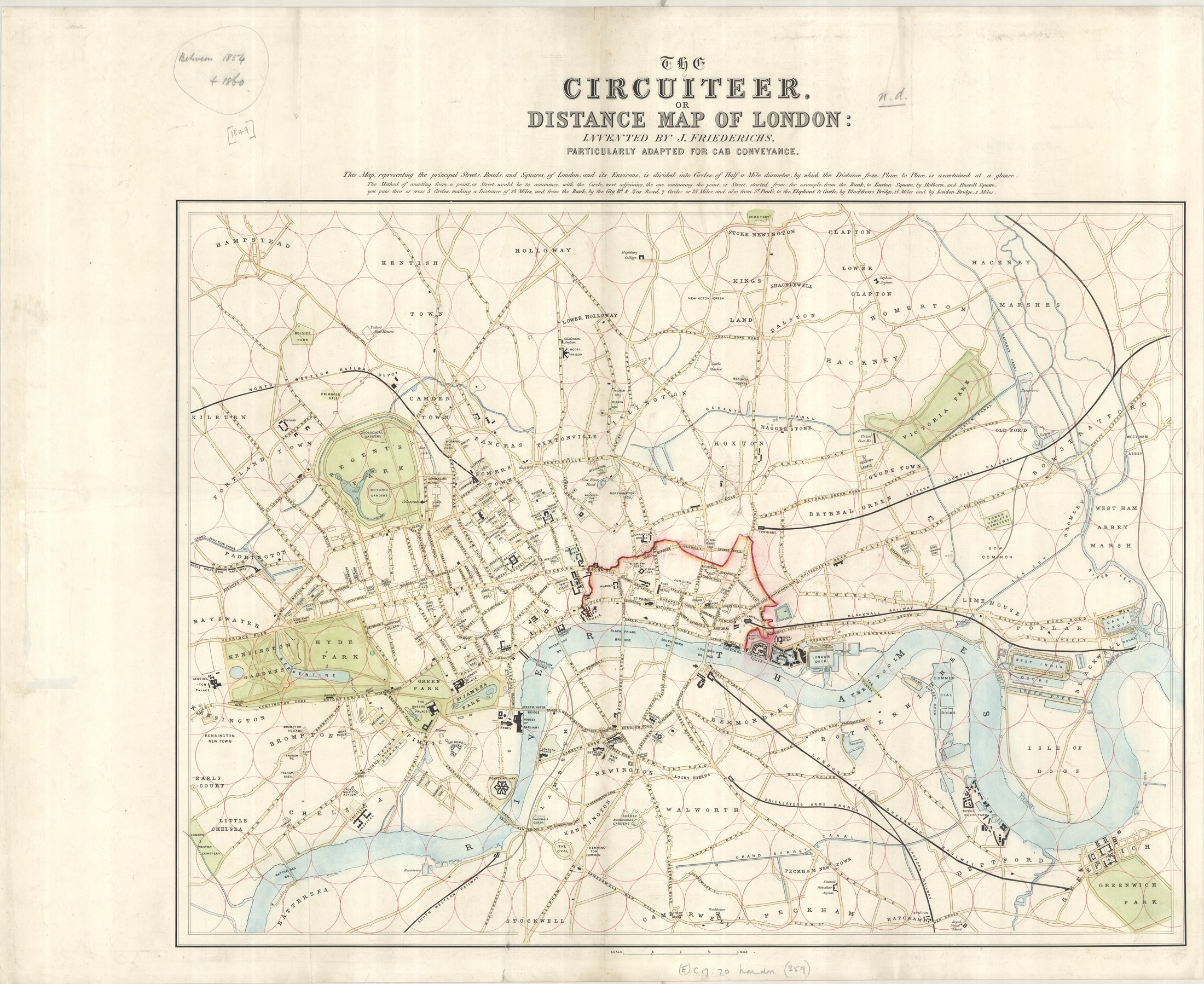 Measuring distances in maps is a long established practice; from simply putting in distances along roads from point ‘a’ to ‘b’ to concentric circles at a set distance radiating out from a central location to the scale bars and grids so familiar to us from our Ordnance Survey maps. With so many maps of London published Friederichs map stands out with it’s unusual approach. 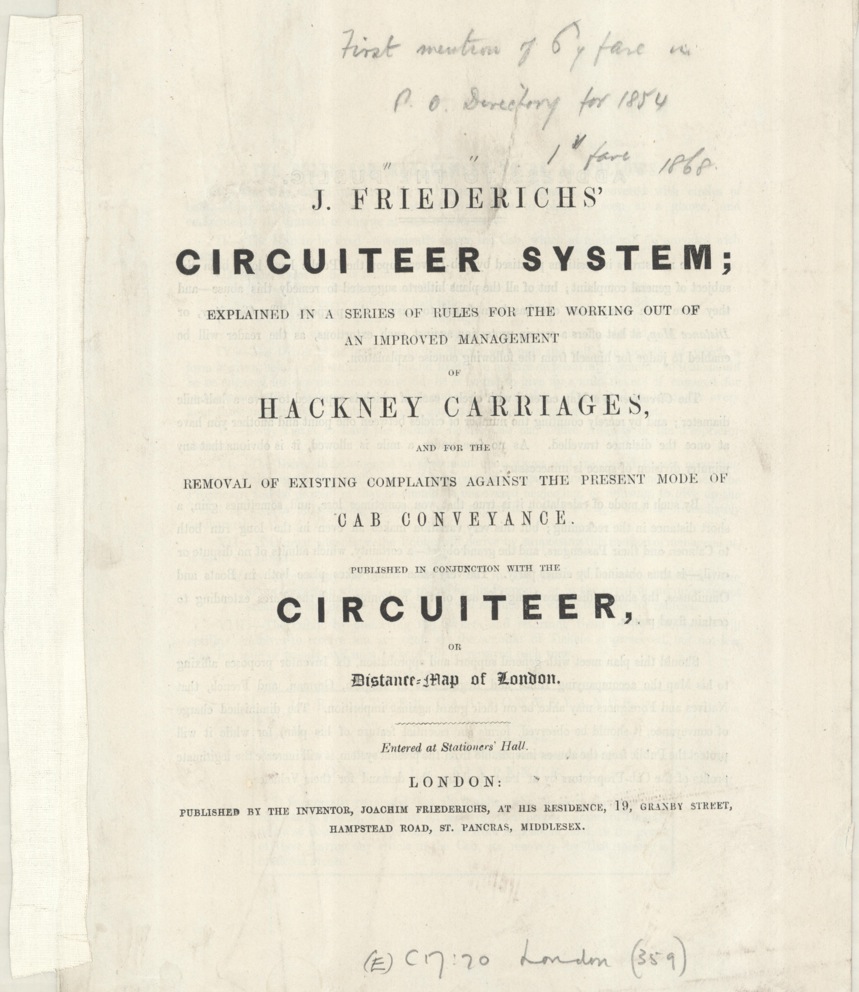 As well as a distance guide the map serves as a proposal to right what the author sees as a serious case of wrong-doing, the over-charging by Hackney Carriage drivers. In text accompanying the map Frederichs writes ‘The monstrous imposition practised by Cab-Drivers upon the public have long been the subject of general complaint, but of all the plans hitherto suggested to remedy the abuse – and they have been many – not one has been found to ensure. The purpose the Circuiteer, or Distance Map, at least offers  a certain protection against such extortions, as the reader will be enabled to judge for himself, from the following concise explanation.’

The text goes on to give examples of proposed fares, considered reasonable, by mile as opposed to by route, and suggests the buying of pre-paid tickets instead of paying cab fares. 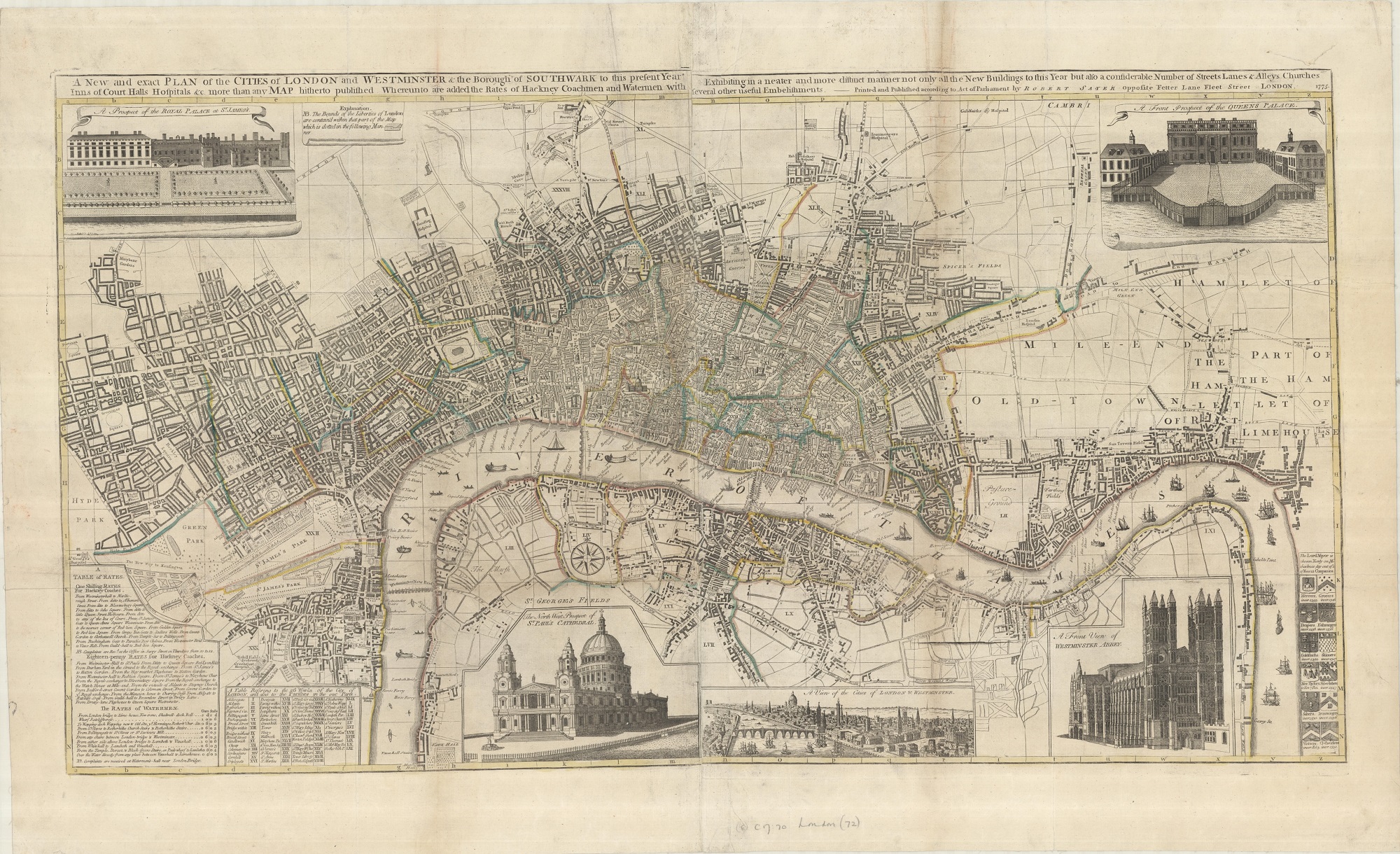 Hackney Carriage fares have featured on numerous maps of the City. 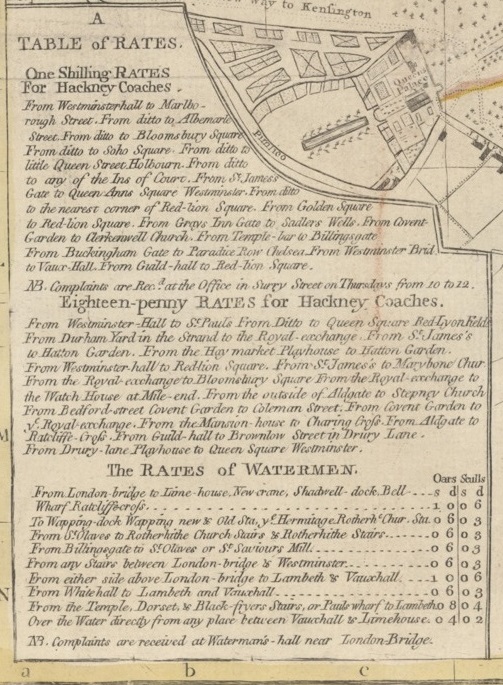 This example, A new and exact plan of the cities of London and Westminster & the Borough of Southwark…whereunto are added the rates of Hackney Coachmen and watermen with several other embellishments. By Robert Sayer, 1775. (E) C17:70 London (72),  has, as well as a wonderful map of the City, a small box in the bottom corner giving a ‘Table of Rates’ at both a shilling and eighteen-penny and rates for the Thames watermen. The map also has insets of the major buildings and shows the Ward boundaries.

This style of mapping, to centre on a major city or town, was a popular form of cartography that dates back as far as the late 1600s (the earliest example in the Bodleian is a map showing the towns within a twenty-mile radius of London from c1686). Often produced within a circle the style had gone out of fashion by the mid-1800s with the arrival of detailed area maps such as the 1st edition of the 1″ Ordnance Survey. 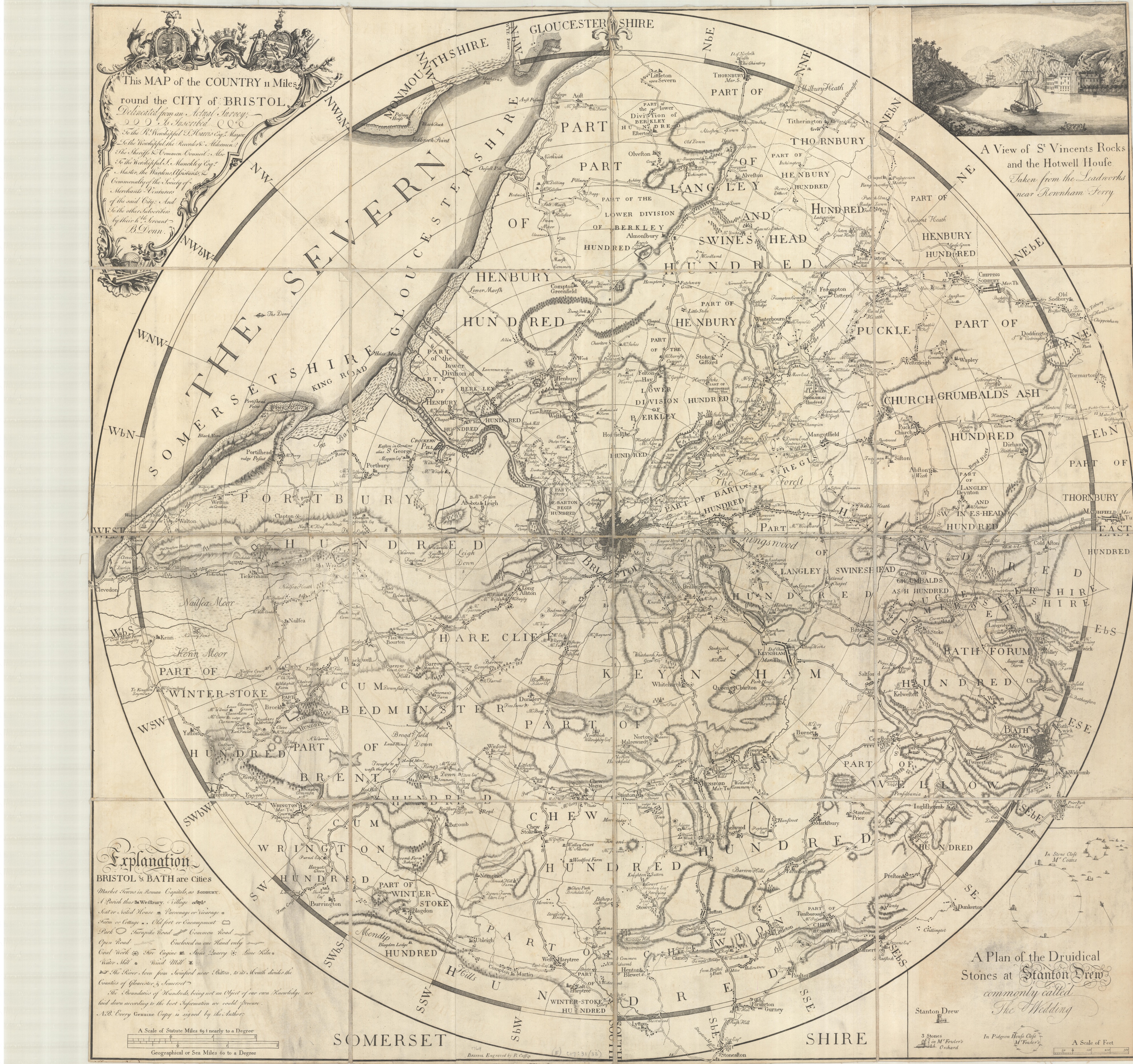 ‘This map of the country 11 miles around the city of Bristol‘ is an excellent example of the genre. It was made by the Devonshire map-maker and mathematician Benjamin 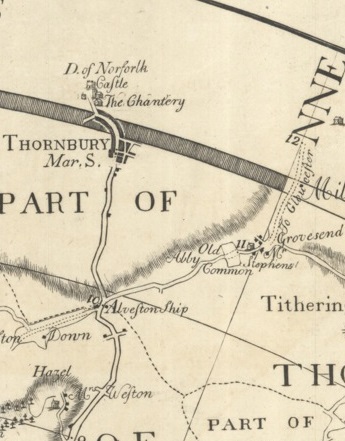 Donn, who had moved to the city in 1764 and had set up a subscription to pay for the making of the map in 1767. There are a number of things of note on the map, not least the skill shown in the cartography and engraving (engraving done by the rather unfortunately named R. Coffin) . Market towns – such as Thornbury shown here – have the market days noted which would have been important as these towns were centres for the sale of local produce as well as a place for labourers to gain employment. With the collection of rents and tolls they were also a useful way for the host town to gather funds. Subscribers are named throughout the map at their place of residence, giving a wonderful connection to people alive in the area at the time, such as Mr. Stephens of Titherington. Rich subscribers often appear in a number of the maps of their area, a way not only of helping with the production of the item and hence adding to the knowledge of their location but also, literally, a way of putting yourself on the map. For instance, a Messrs  Hawkins and Harrington appear on our map of Bristol and also of a similar map for Bath (‘A map of 5 miles around the city of Bath’, 1771, (E) C17:54:15). 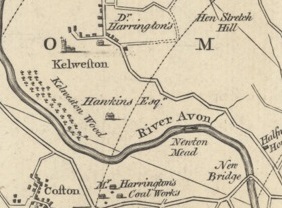 Mr. Harrington was a descendent of Sir john Harrington, courtier to Elizabeth I, poet and inventor of the first flushing toilet, which was installed in Kelston Manor (Kelweston on the maps), while Mr. Hawkins was Sir Caesar Hawkins, one of the physicians to both George II and George III.

The map marks distances in miles along the important roads out of Bristol, industrial works and places of worship and has two insets, both intended to show off local landmarks. In the bottom right corner is a plan of the prehistoric Stone Circle at Stanton Drew, which is the second largest in the country after Avebury. With this plan Donn shows his mathematical skills, measuring accurately not only the diameters of the three circles but also the distances between them. 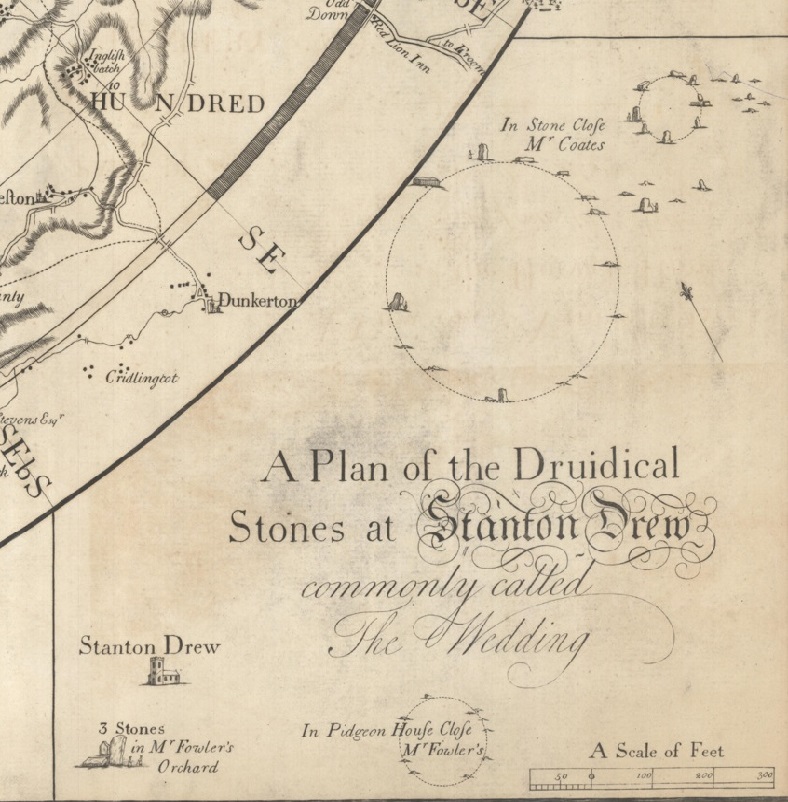 One of the most interesting things on the map though isn’t the most obvious. Tucked away under the legend is this seemingly innocuous note

highlighting the problems that any author had before strict copyright laws of losing sales to  poor imitations or downright plagiarism.

Another example of this type of map is this beautifully coloured map of London by John Fairburn (Fairburn’s map of the country 12 miles round London, 1800, (E) C17:40 (145)). Fairburn uses the same design as Donn, complete with illustrations 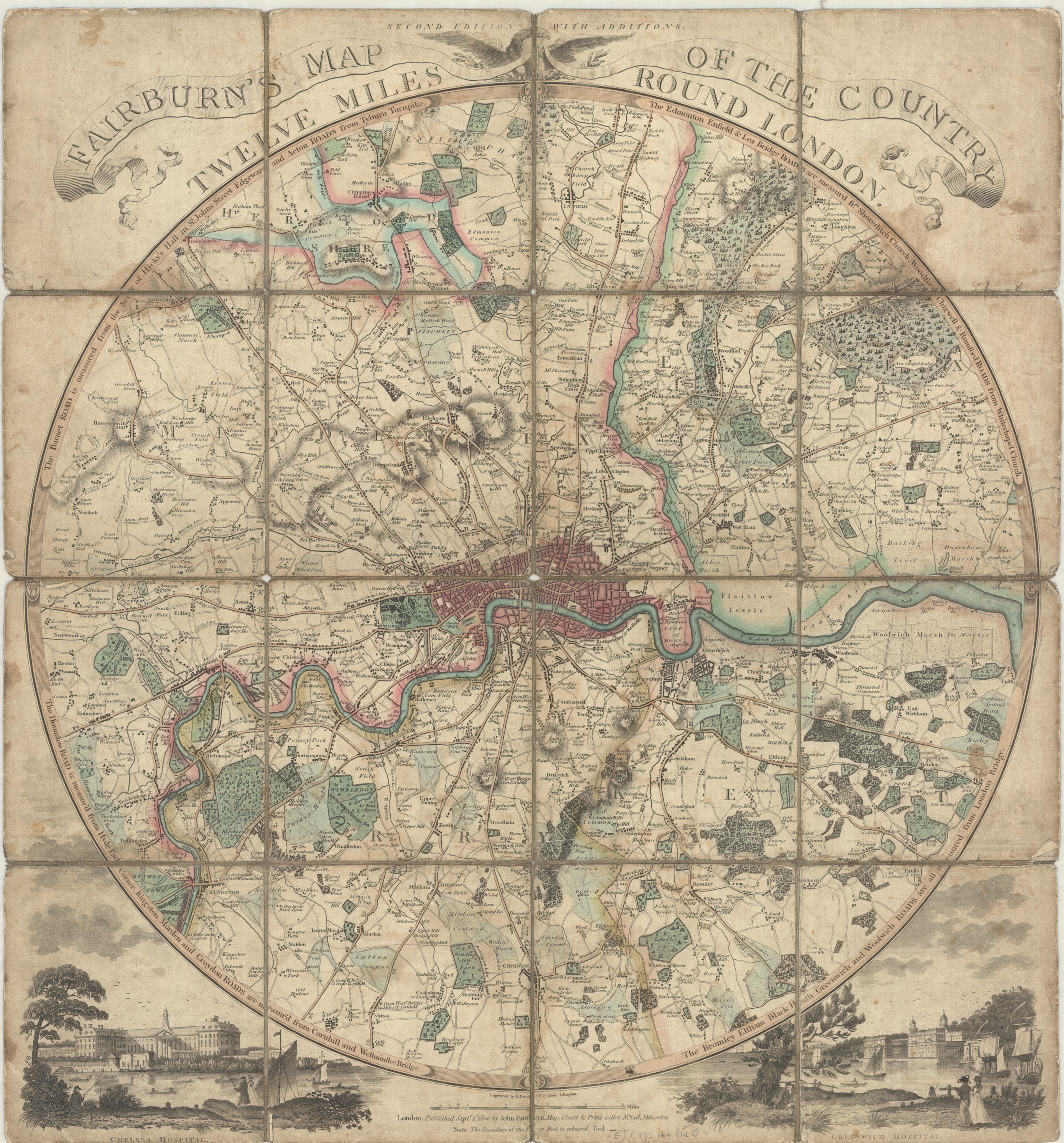 and like Donn’s map Fairburn’s is backed with cloth to strengthen the paper and avoid damage caused by folding. The London map is  a second edition though, the first proving popular, as well as profitable, enough to not need subscribers. And to finish, one further example of these ‘Centre’ maps, this time of Oxford by another Benjamin Donn(e), who despite the Jnr. was in fact the nephew of the B. Donn whose map is at the start of this blog (A new map of the country round the city of Oxford…c.1790. (E) C17:49 (78). 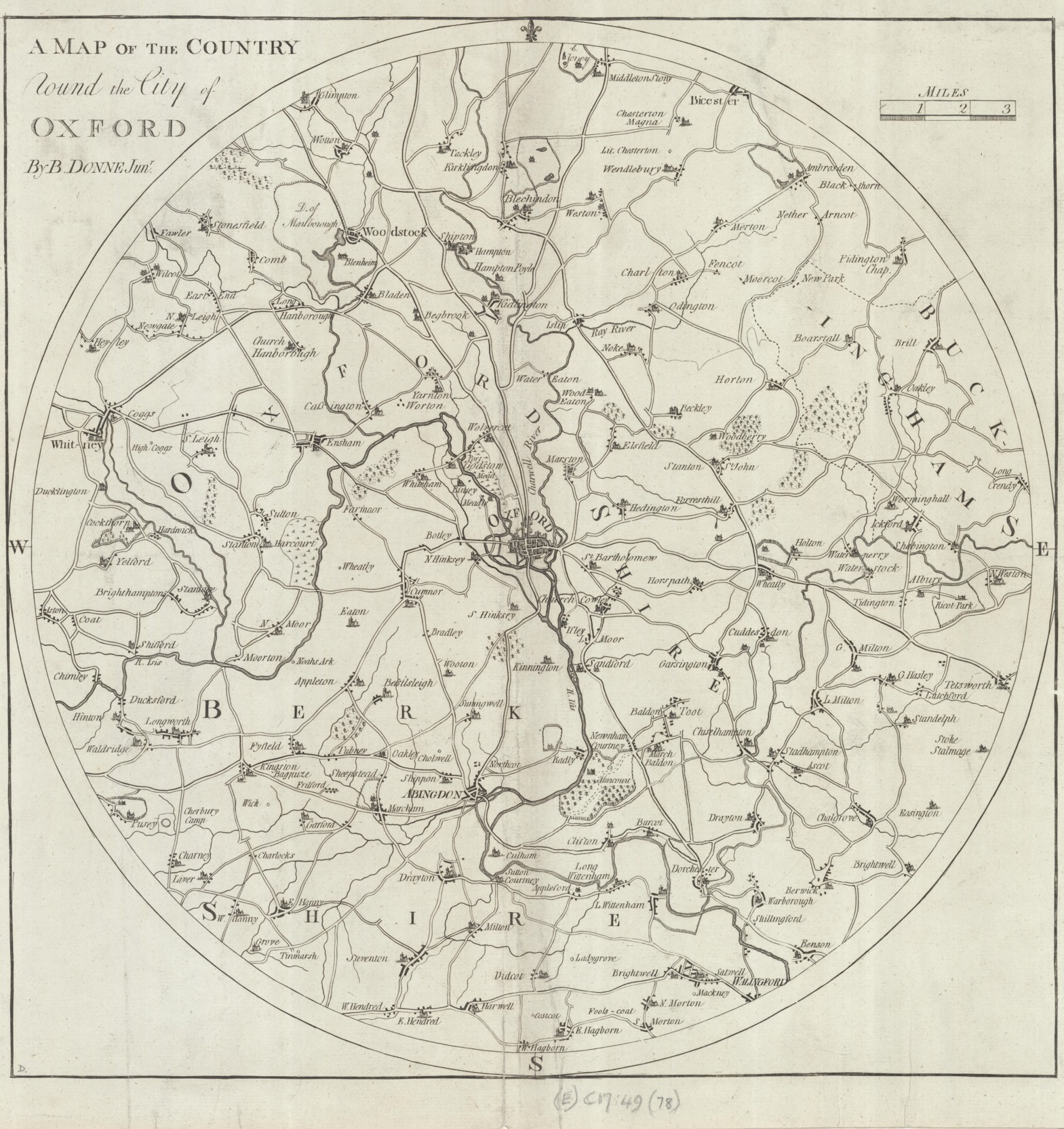