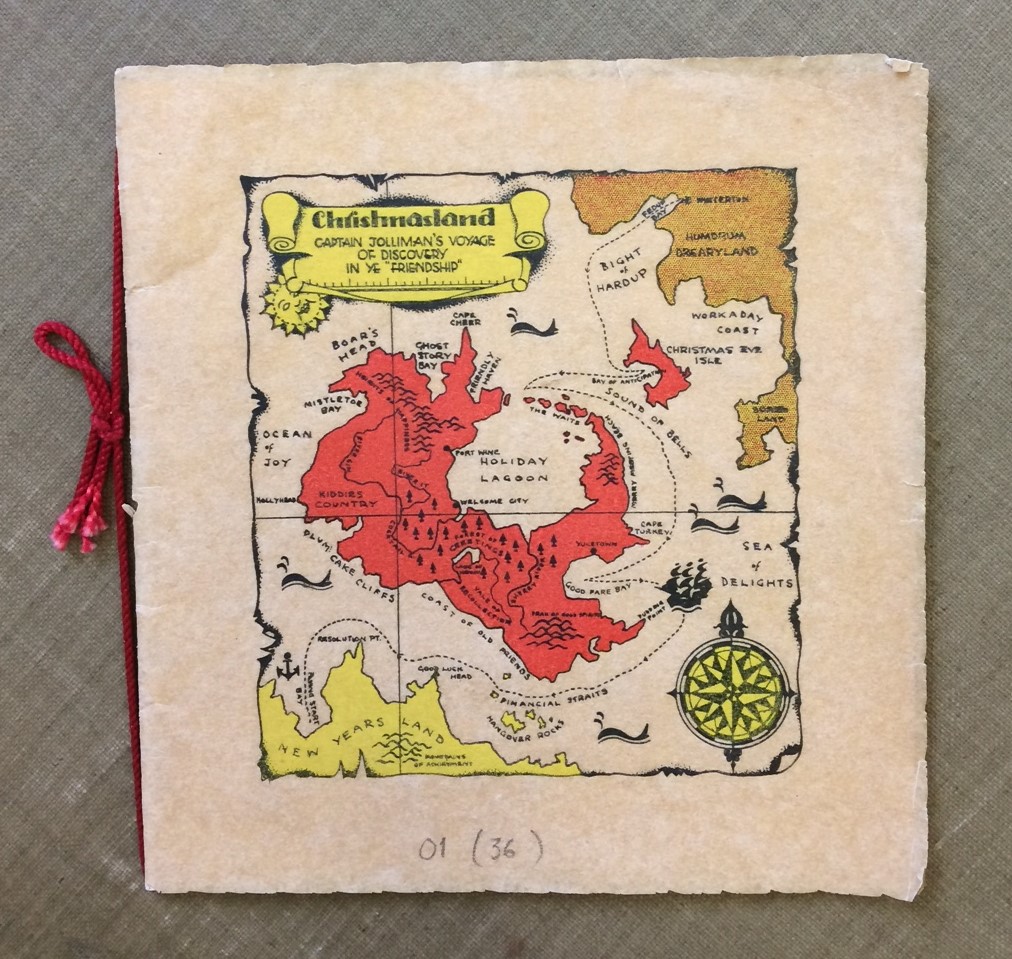 The island has many seasonal placenames such as Mistletoe Bay, the Forest of Greetings (the forest symbols being, appropriately enough, Christmas trees), Welcome City, Kiddies Country and the Coast of Old Friends. The River Gin and the River It combine to form Cocktail River (hurrah!) and there are various plays on words relating to place names, such as Port Wine, and the Sound of Bells. The captain’s route continues past Pudding Point, through the Financial Straits, amongst the Hangover Rocks and past Resolution Point to New Years Land.

Cartographical allegories like this have been produced for centuries. Maps along these lines illustrating the “land of love” or themes around courtship and marriage became popular in seventeenth century France, and soon spread to other European countries including England. Allegorical maps with a morally improving theme also appeared, illustrating the spiritual journey through life. In the eighteenth and early nineteenth century allegorical maps as games were also popular. Meanwhile, in the nineteenth century, the Christmas card was gaining in popularity, as outlined in this recent blog from the Bodleian’s John Johnson collection.  But Christmasland, combining the two, may be a one off.

The card was donated to the Map Room recently, after it was spotted in the Oxfam shop in Chipping Norton by a Bodleian reader. Such ephemeral material often doesn’t survive so it was a welcome addition to the collection. 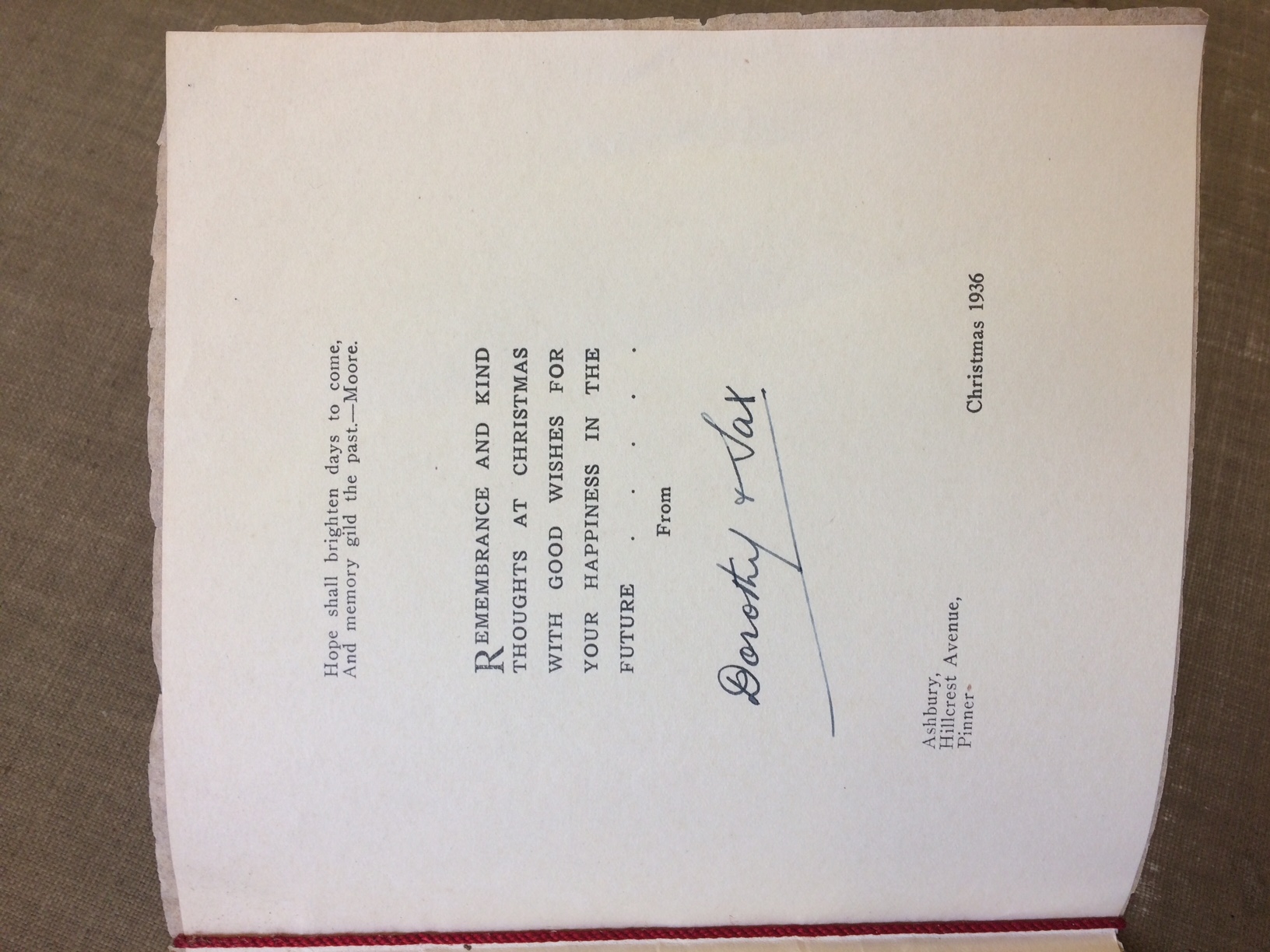 The card is printed inside with an address in Hillcrest Avenue, Pinner, then as now a pleasant road in an affluent commuter town on the outskirts of London. It is signed by hand, and dated Christmas 1936. There is also a quotation:

Hope shall brighten days to come
And memory gild the past

From a poem by the Irish writer Thomas Moore. These words, and a printed greeting with

is something we need in the current difficult times. Happy Christmas! 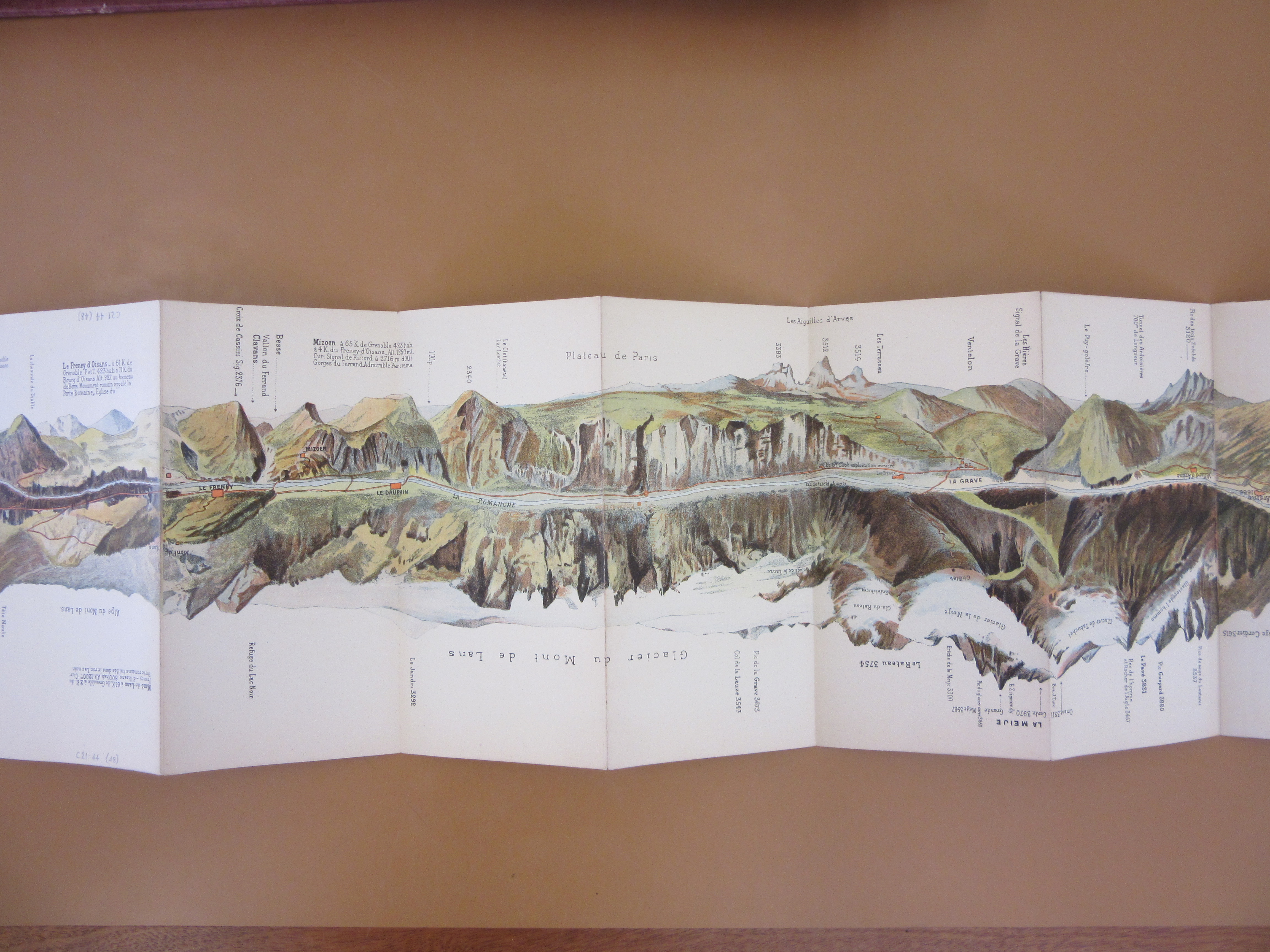 December 11th is United Nations International Mountain Day, so we’re celebrating with this unusual Alpine panorama.  This map of an Alpine road appears at first glance to be a view of mountains reflected in water.  Closer examination shows that a road runs along the centre of the map; it is printed on a long strip, folded concertina style, with the road shown as a straight line and panoramic views of the mountains on either side. Unusual formats like this have been used in other Alpine maps, to address the challenge of portraying a long vista on paper; a panorama of the view from the summit of Mont Blanc featured in an earlier blog post. 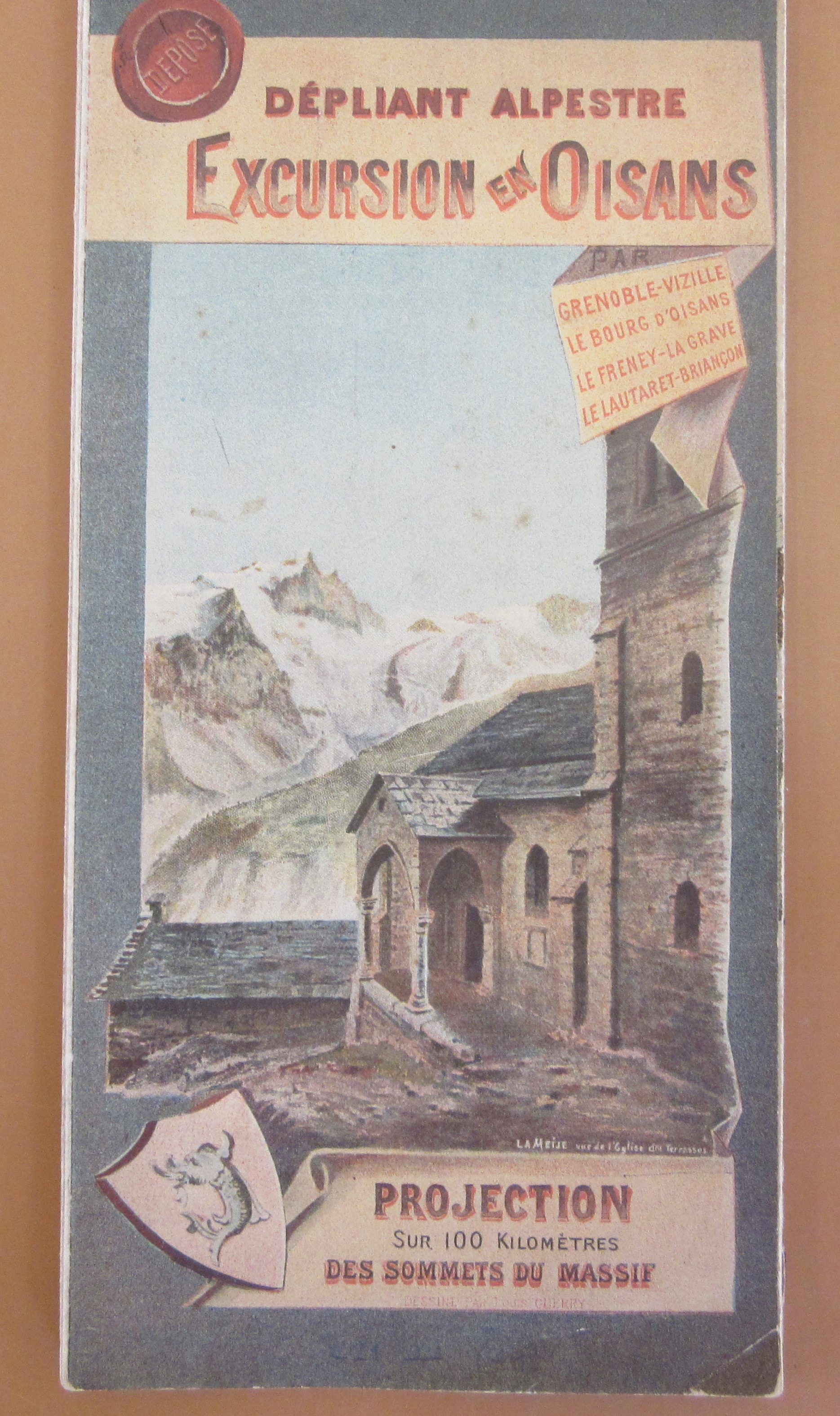 The map was drawn by the poster artist Louis Guerry, and published in Grenoble in 1896 by Joseph Baratier. It shows the road between Vizille and Briançon in France, close to the border with Italy. Side roads wind off into the mountains and small Alpine settlements are marked along the way. Highest and most dramatic of the mountains is La Meije, with five peaks and glaciers flowing down either side; it was one of the last major Alpine peaks to be climbed, and also features on the cover illustration (above). Other names, such as Galibier and Alpe d’Huez, will be familiar to fans of the Tour de France cycle race;  the road up to Alpe d’Huez did not at this time reach all the way to Huez itself, which appears as a high isolated village. 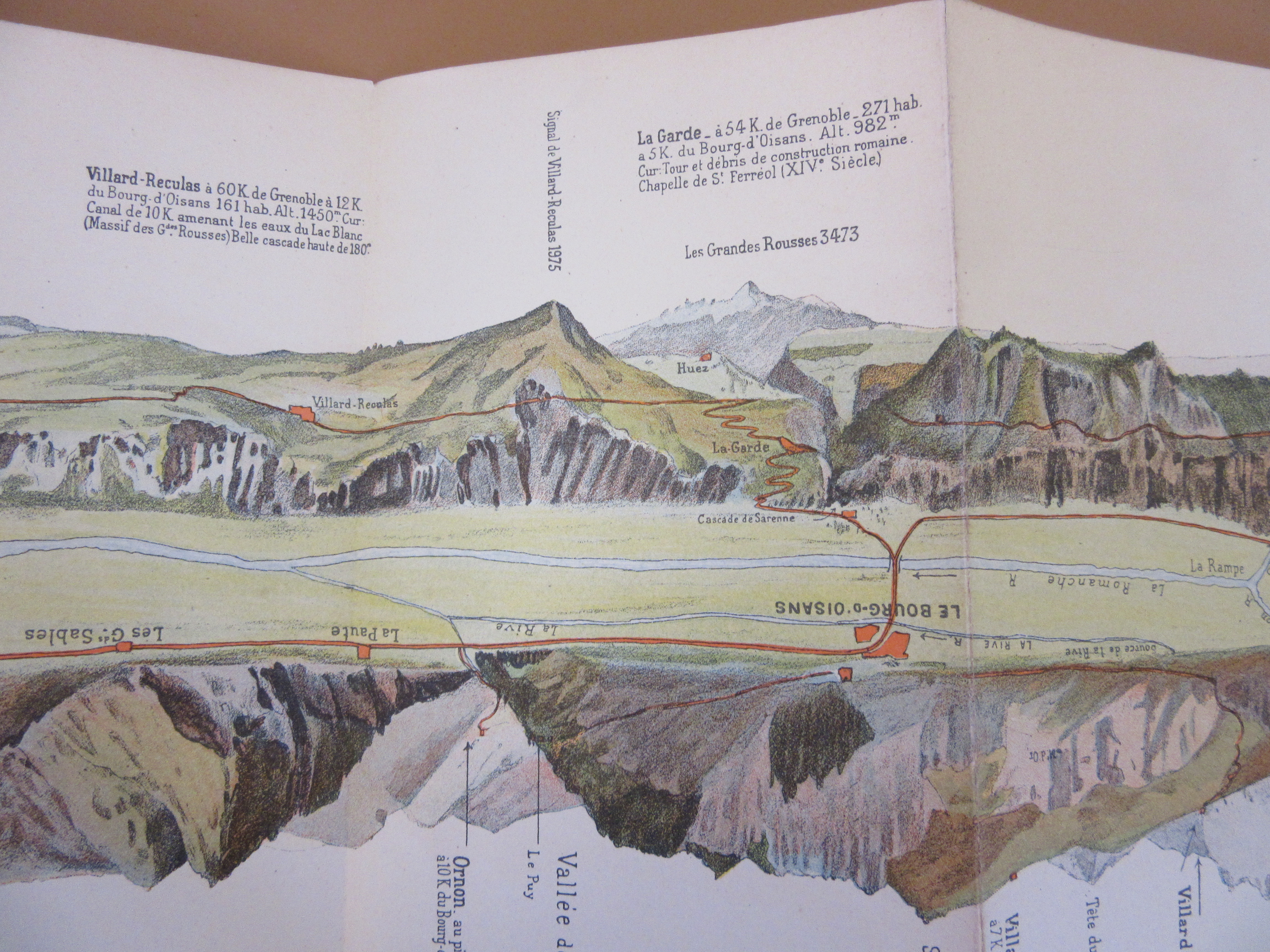 This copy came to the library recently, a donation from the grandson of Thomas Arthur Rumbold. When Rumbold joined the Alpine Club in 1902 he was their youngest member. His application shows an impressive list of climbing experience from the late 1890s; it includes  mountains in the French, Italian and Swiss Alps, many of them “without guides”, and rock climbing in the Allegheny Mountains in Virginia. The map was donated along with Rumbold’s trench maps from his time serving in WWI, which were a welcome addition to our collection. Happily, Rumbold  survived the war; he went on to become Secretary to Sir George Schuster, Governor of the Bank of England. He also found time to enjoy more Alpine fun in the snow (see below) and eventually became the oldest member of the Alpine Club! 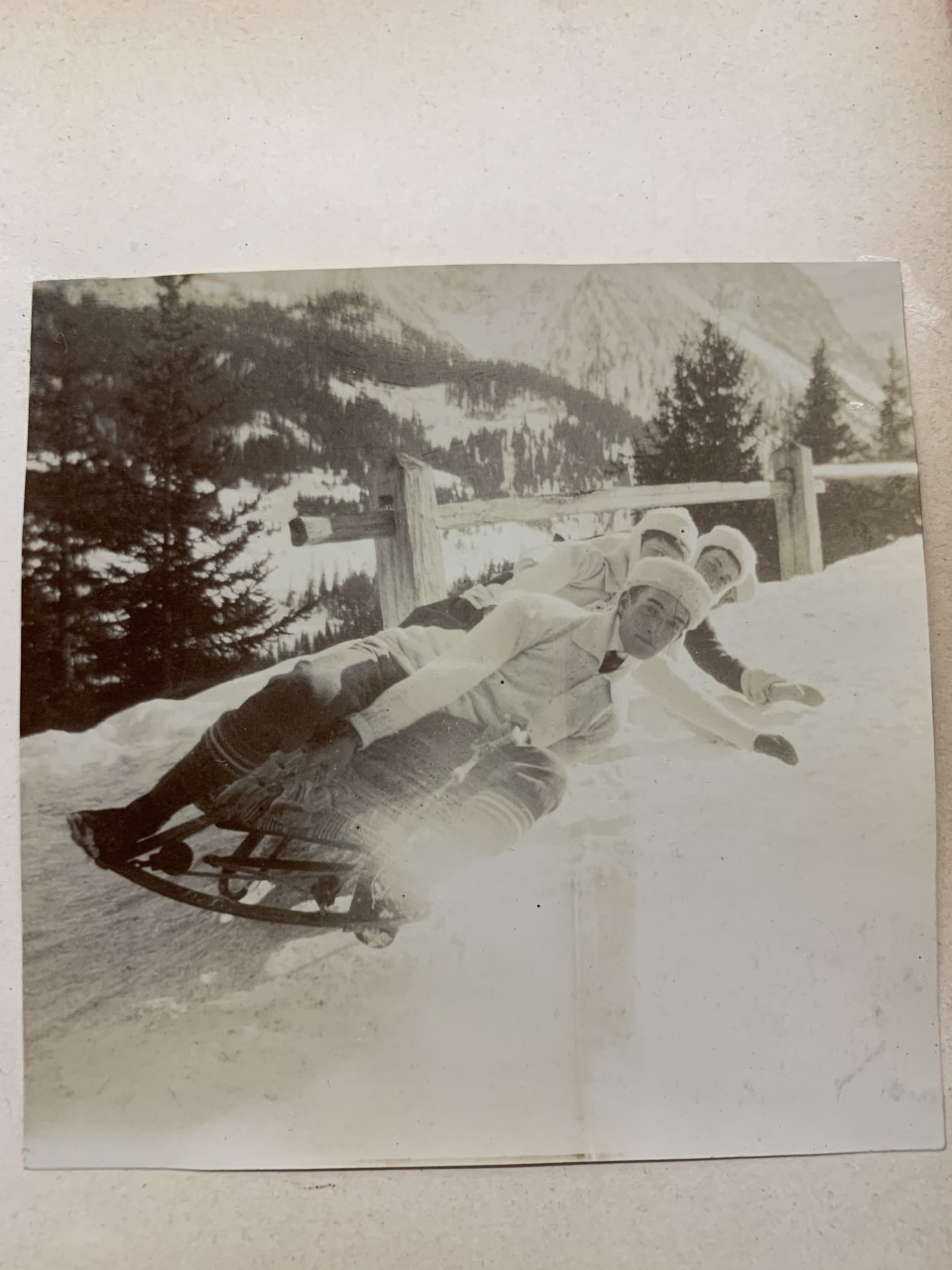 The map folds into a small cover with a conventional route map on the back. 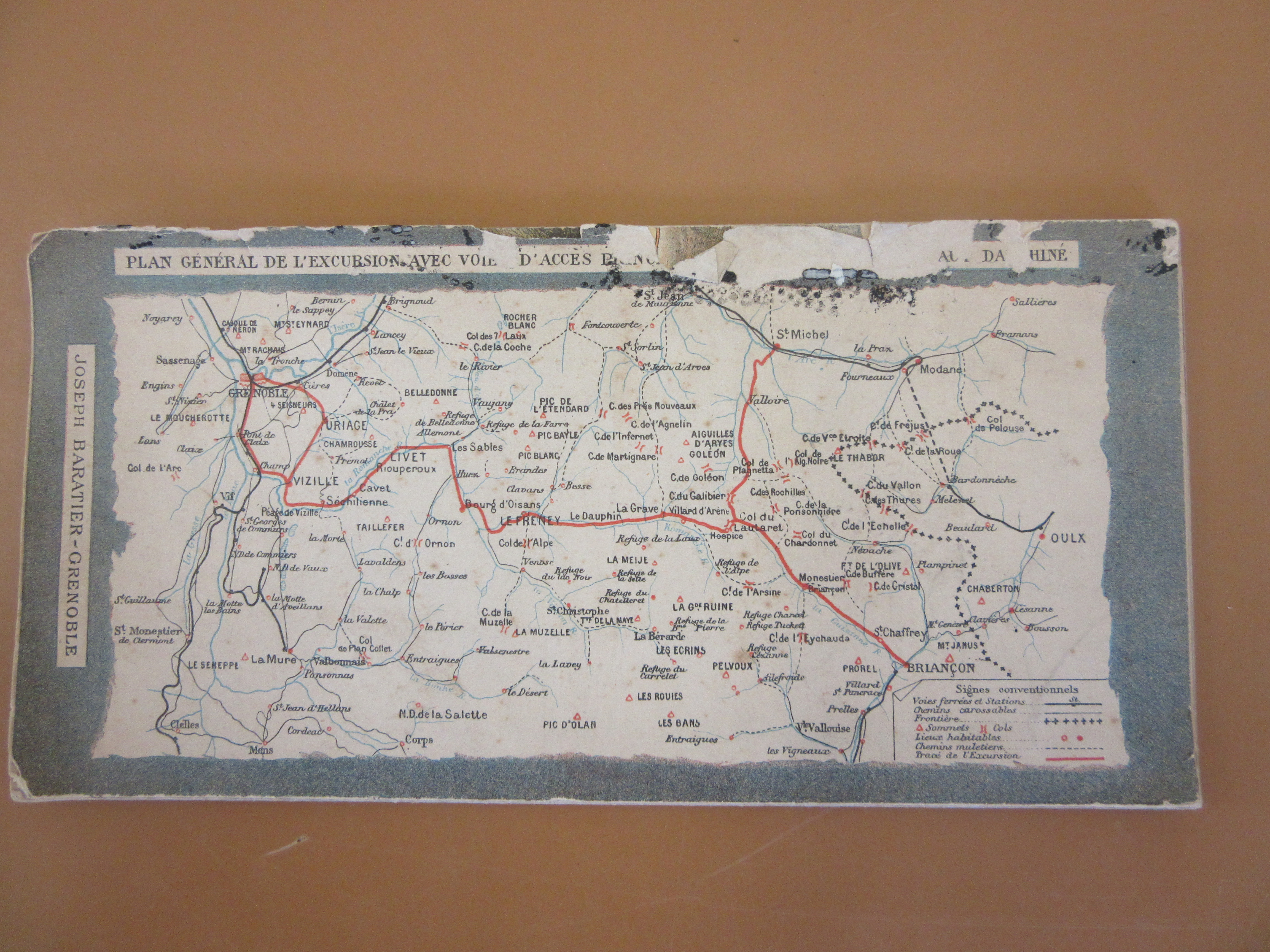 The map when extended is over 2 metres long.  As we admired it in the Map Room office, we reflected that in these times of Covid restrictions it is rare to find a map so long that more than one person can look at it at once while social distancing. 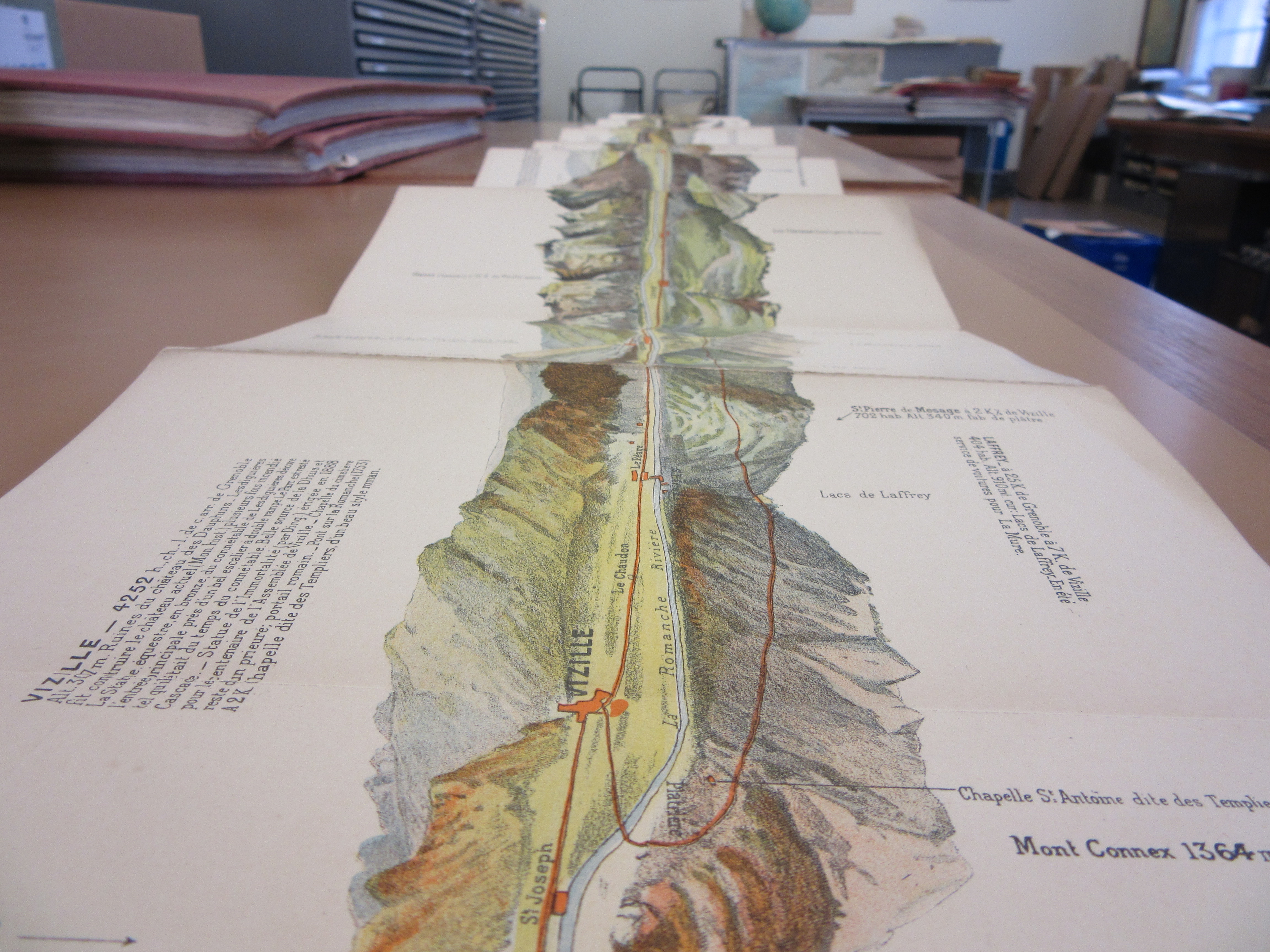 You can see more about this map at the website of the Bibliotheque Dauphinoise.