This beautiful map of part of the coast of Brazil has been in the Bodleian’s collections for many years. It was drawn to our attention recently by an enquiry from officials in the city of Fortaleza, part of the area which it represents. 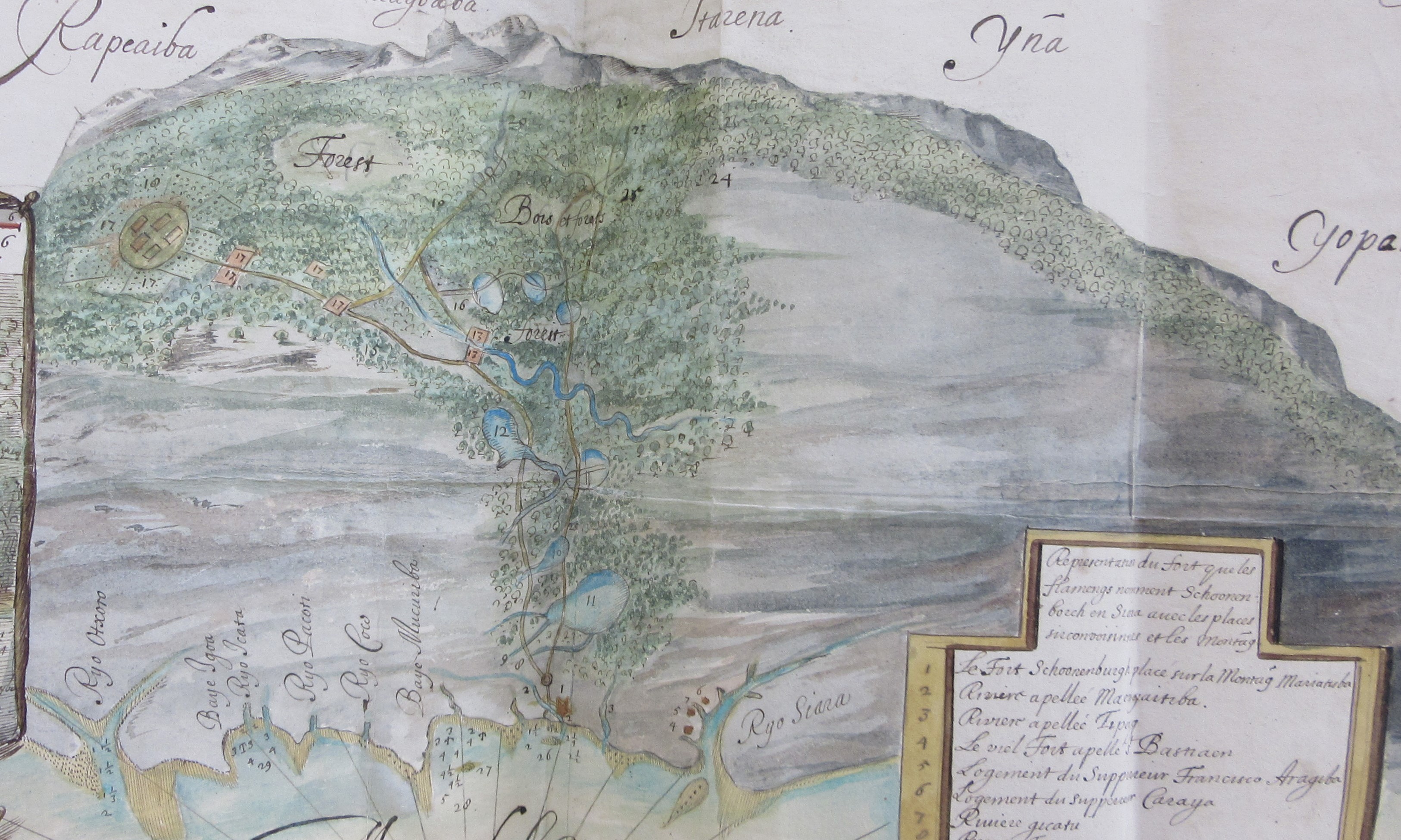 The map is in an unusual style; a planimetric view of the coast from above gradually shifts as we look inland to a bird’s eye view of the mountains outlined against the sky as if in a picture. It shows the area around the fort, built by the Dutch West India Company in 1649 and first named Fort Schoonenborch (the name is spelt in several different ways on this map). The inland areas of forest around the river are beautifully depicted. North is towards the bottom of the sheet, as indicated by the compass rose. 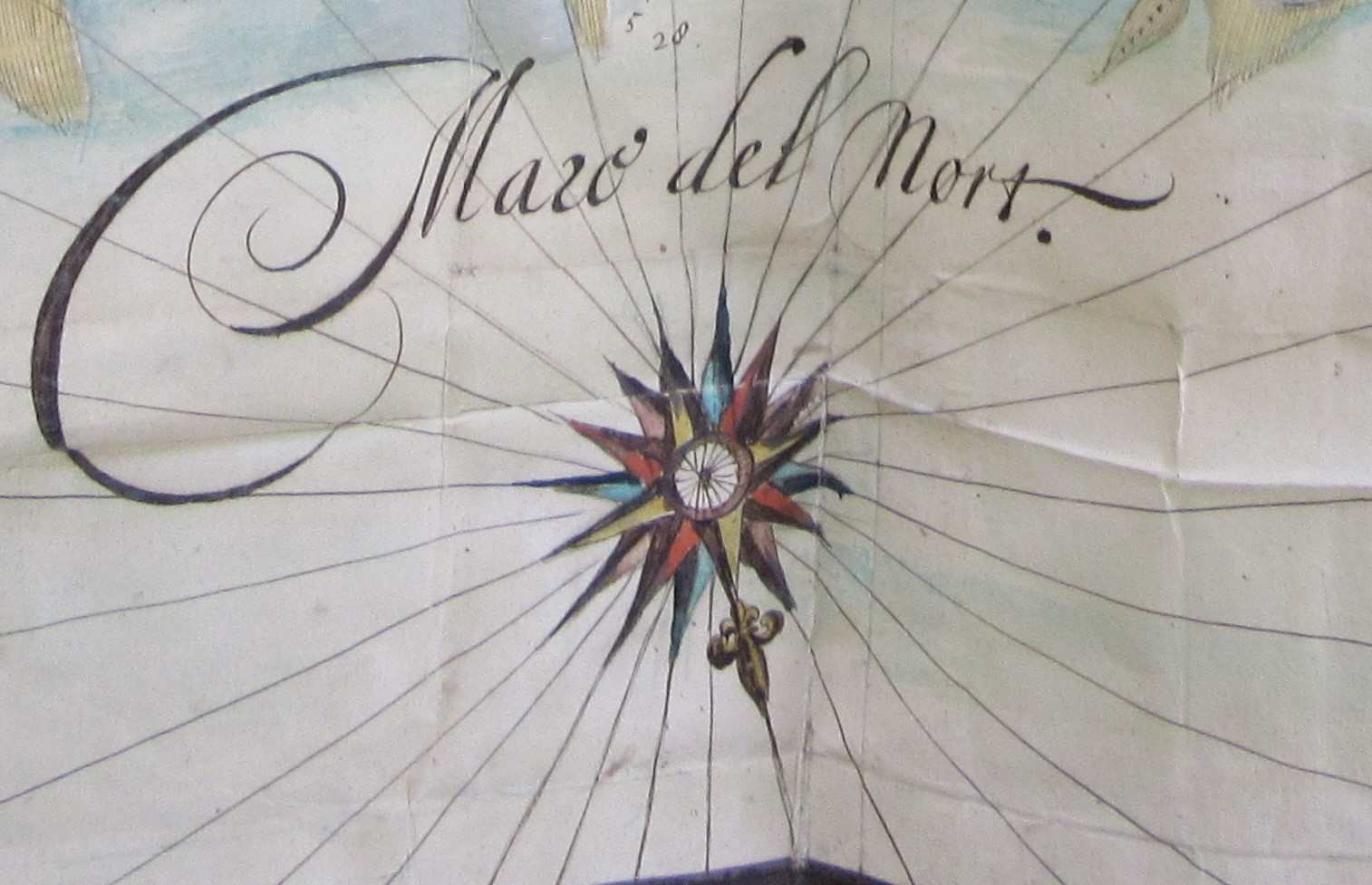 The text is in French, with a number of misspellings that suggest it may have been made by someone who was a not a good French speaker; the spelling of “Zud” instead of “Sud” for south in the title for example. The area was disputed by the Dutch and Portuguese, and the fort was handed over to the Portuguese in 1653. They renamed it Fortaleza de Nossa Senhora de Assunção; the area around it is now a substantial city, still called Fortaleza, capital of the north eastern state of Ceará.

The map includes a detailed plan of the fort, a section through and a numbered index locating its features. This would be useful military information. Some water depths are given around the fort; the map would be of practical use for anyone arriving by sea. 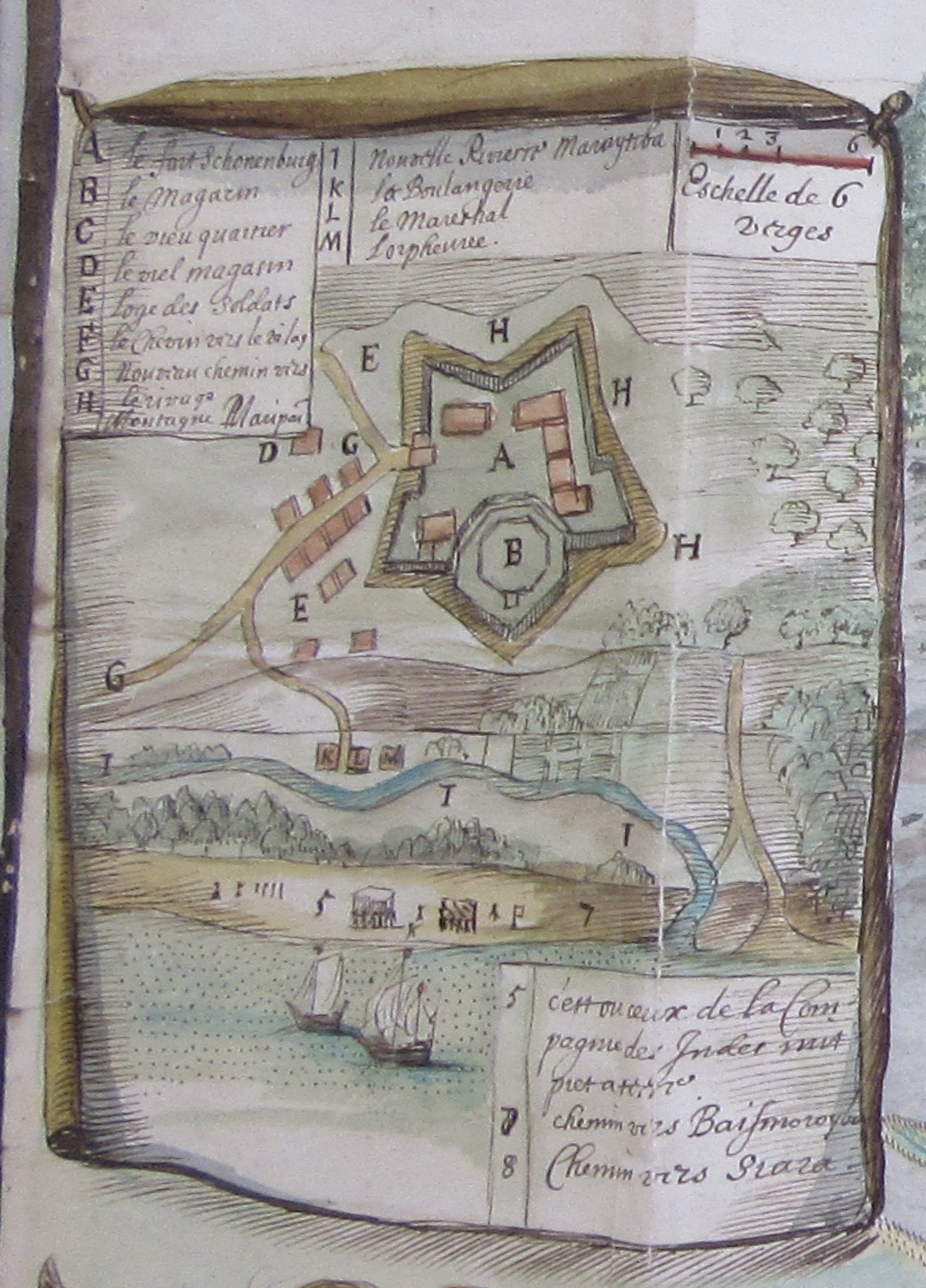 The map was found amongst the papers of Edward Hyde, 1st Earl of Clarendon. Why is this hand drawn map of part of the coast of Brazil amongst the state papers of an adviser to an English king? The answer is in the accompanying written text described as a “Remonstrance concerning advantages for his sacred Majestie”, directed to Charles II. It explains that the map is a “true copy of an original gotten out of the secret cabinet of the Amsterdam West India Company”, and describes the enormous value of silver that exists to be mined in the area. The text appears to come from Balthazar Gerbier (who also refers to himself by the name Douvilly, a reference to a probably invented noble ancestor). At this time Gerbier, formerly a courtier, diplomat and art consultant, had fallen on hard times since the Restoration. He had previously taken part in an unsuccessful expedition to Guiana in search of gold. His extravagant claims regarding silver around Fortaleza do not appear to have been followed up.

The hope of finding precious metal was an important part of exploration of the Americas by Europeans. This cartouche from a Dutch printed map of South America, from around the same time, shows South American people apparently smelting metal before well-dressed European gentlemen in ruffs and flamboyant hats; miners can be seen carrying their pick axes uphill in the background.

In an already crowded field this has to be one of the more over the top cartouches. 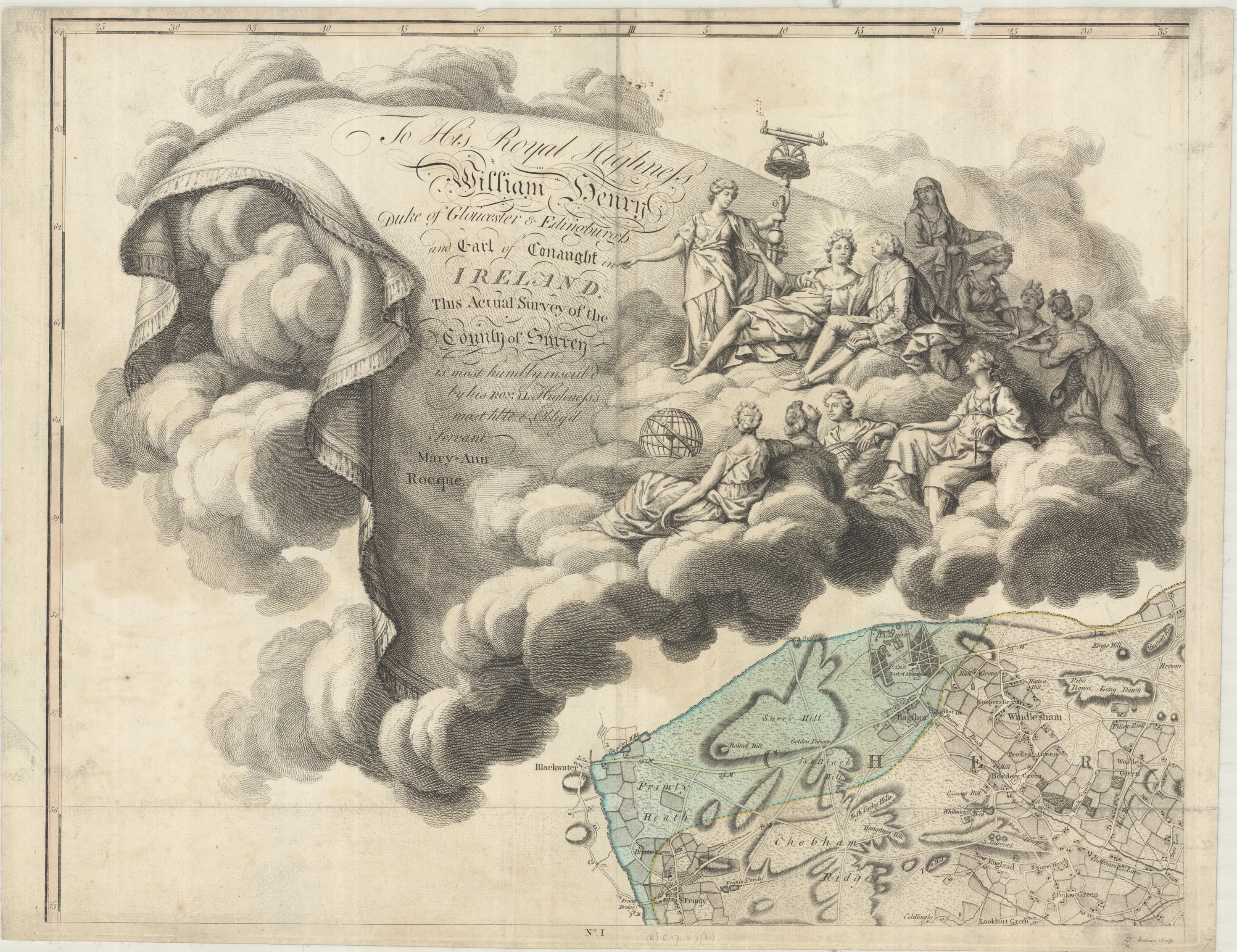 A cartouche is a decorative part of the map that contains information such as the title, cartographer and other relevant text, and often uses symbolism to portray a meaning rooted in Renaissance thinking. It can also, in the case of this map, include a dedication to a person who is either the patron to the map-maker or subscriber to the map being made, the original crowd-funding. Here’s a guide to what is actually going on with this map of Surrey, dedicated to His Royal Highness William Henry. 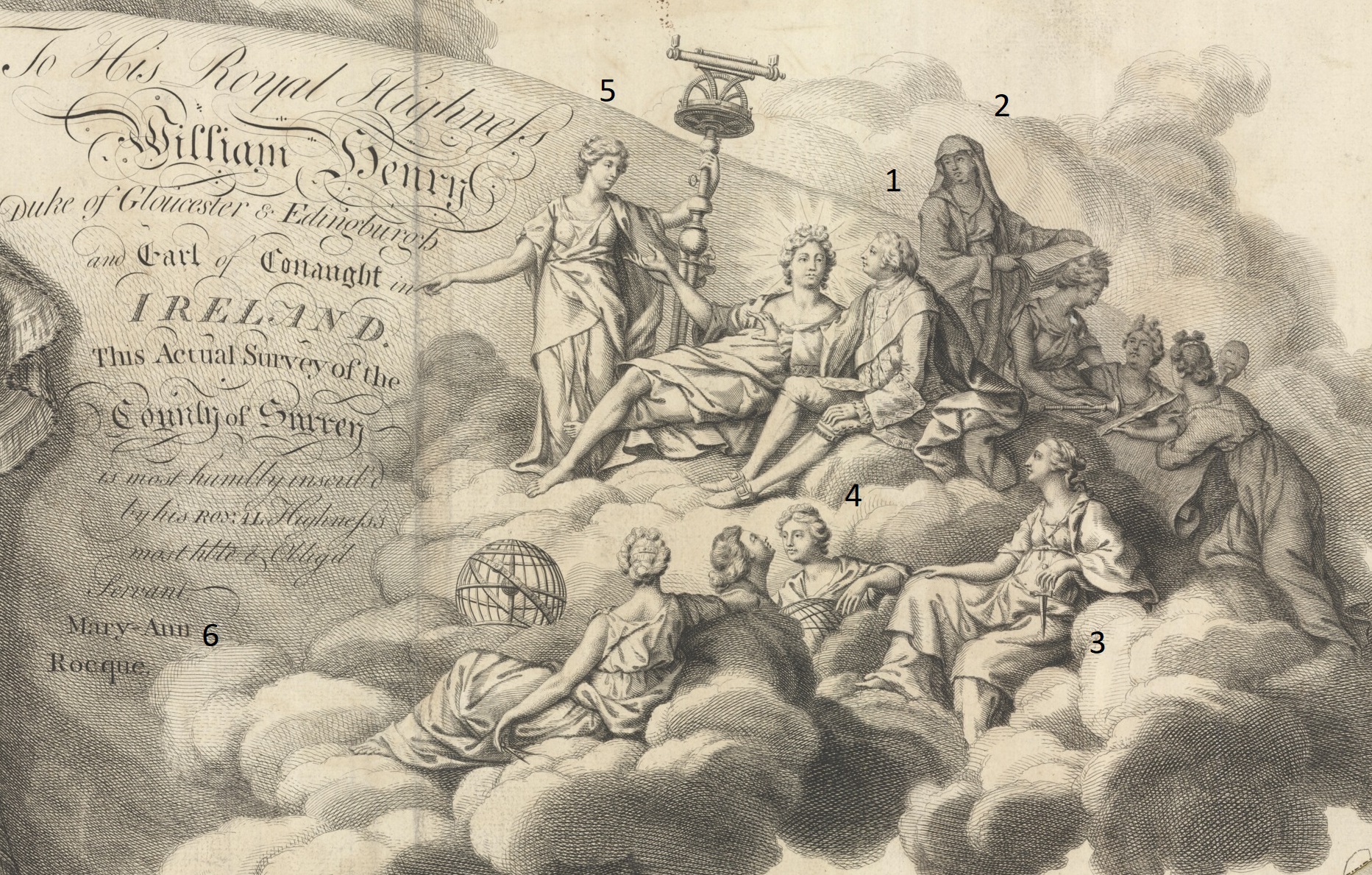 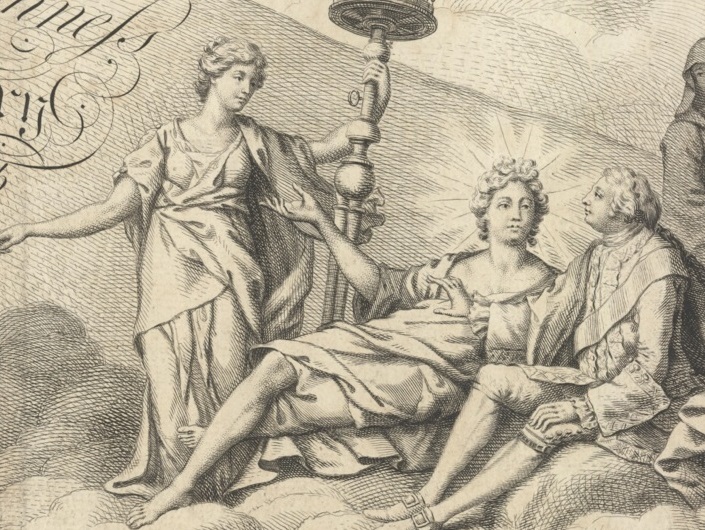 Rocque deserves her place in the clouds (6). The title of the map is ‘A topographical map of the county of Surrey, in which is expressed all the roads, lanes, churches… the principal observations by the late John Rocque… compleated and engrav’d by Peter Andrews’ and this is the third edition,  from c1775. John Rocque died in 1762 and his wife Mary Ann carried on publishing maps after his death. Even though Rocque surveyed Surrey in preparation for this map it was Mary Ann who was responsible for the printing and selling of the work and it is Mary Ann, ‘his most h[um]ble and oblig’d servant’ who dedicates the map to the Prince. Mary Ann went on to make maps herself, eventually being awarded the title ‘Topographer to HRH the Duke of Gloucester’. 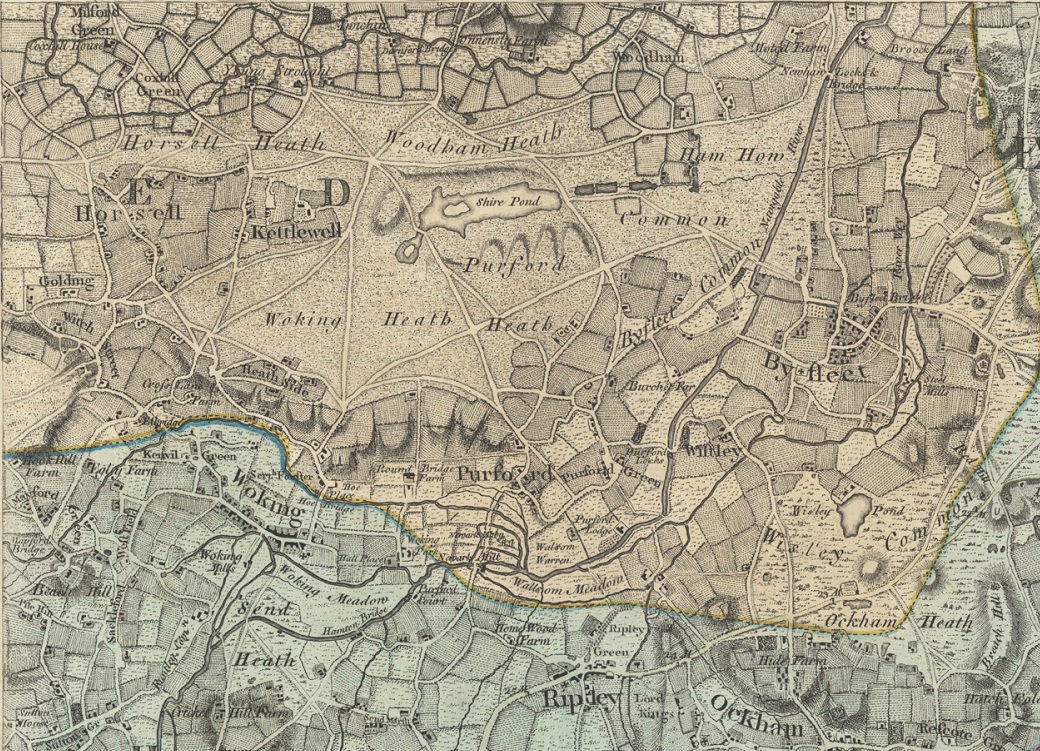 This is the only map that John Rocque and Peter Andrews worked on together though Andrews did further work for Mary Ann Rocque before concentrating on nautical charts. The two different colours on this extract are for separate Hundreds, a county division larger that a Parish. For different reasons Horsell features in an earlier blog post here

A topographical map of the county of Surrey, in which is expressed all the roads, lanes, churches… the principal observations by the late John Rocque… compleated and engrav’d by Peter Andrews. c1775 (E) C17:57 (31)