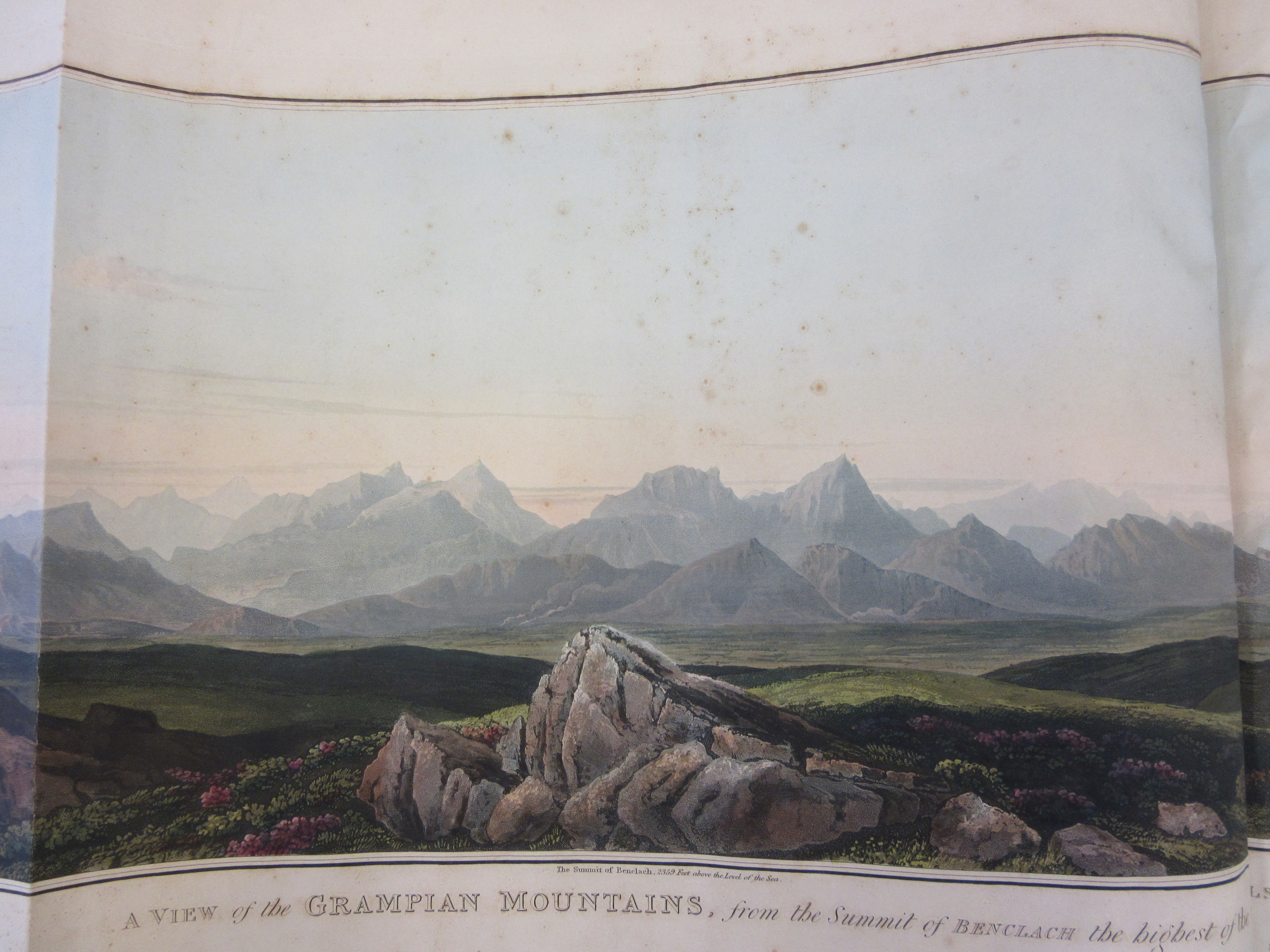 Over a decade ago, the Bodleian Map Room moved its collections out of what was then the New Bodleian Library, for the building to be completely redeveloped into the shiny new Weston Library. Anything uncatalogued was given a barcode and brief record to locate it in the new storage facility in Swindon. It was while tidying up the last few of these that we stumbled across this beautiful panorama of the Grampian Mountains. Everyone loves a panorama, so here it is, showing a view across the Scottish landscape.  The hills grow increasingly faint into the distance.  Settlements can be located by the wisps of smoke rising from them, presumably from peat fires. 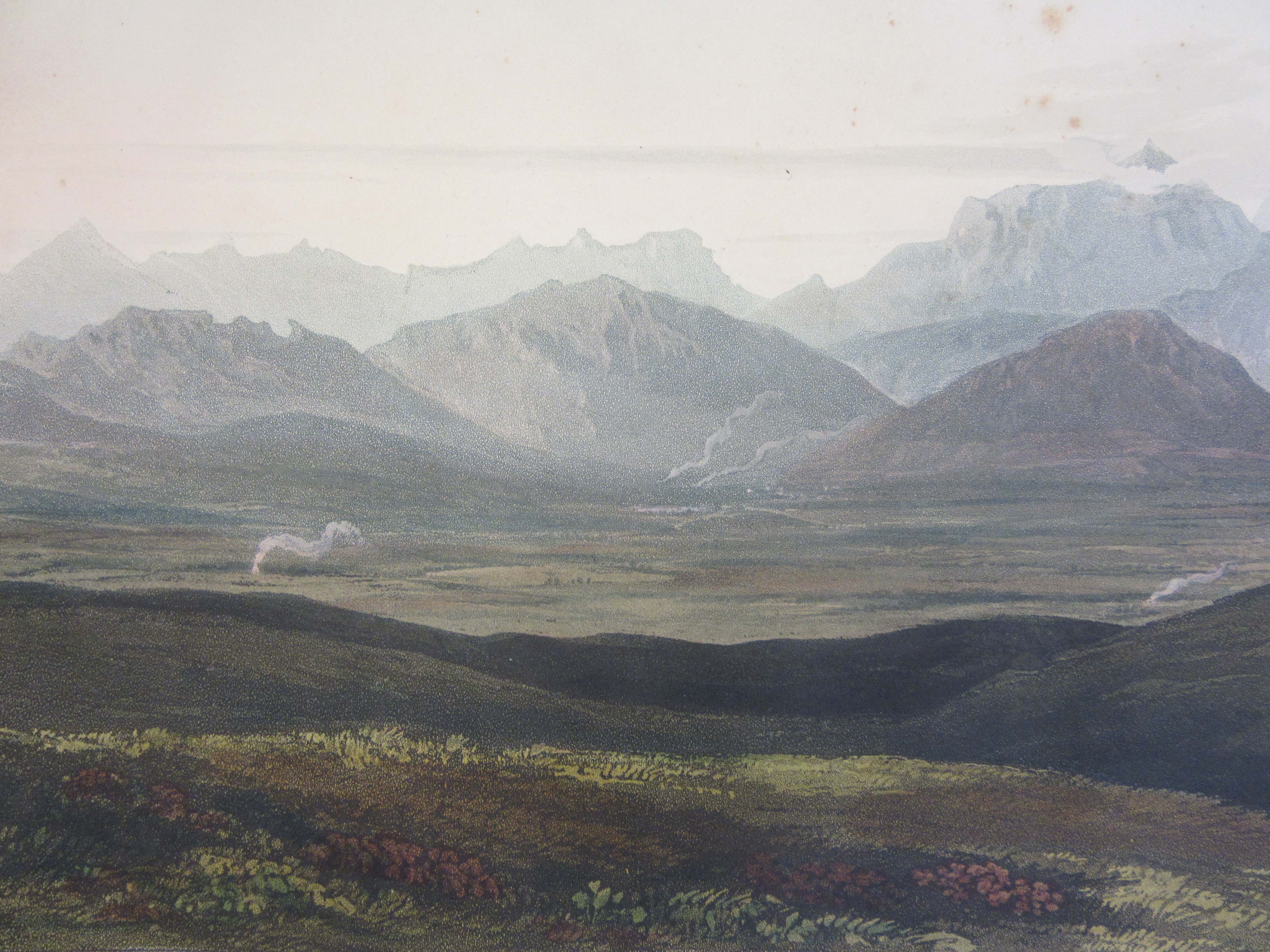 In the foreground a picturesque rocky outcrop is surrounded by colourful heather; this is captioned beneath “The summit of Benclach, 2359 feet above the sea.” 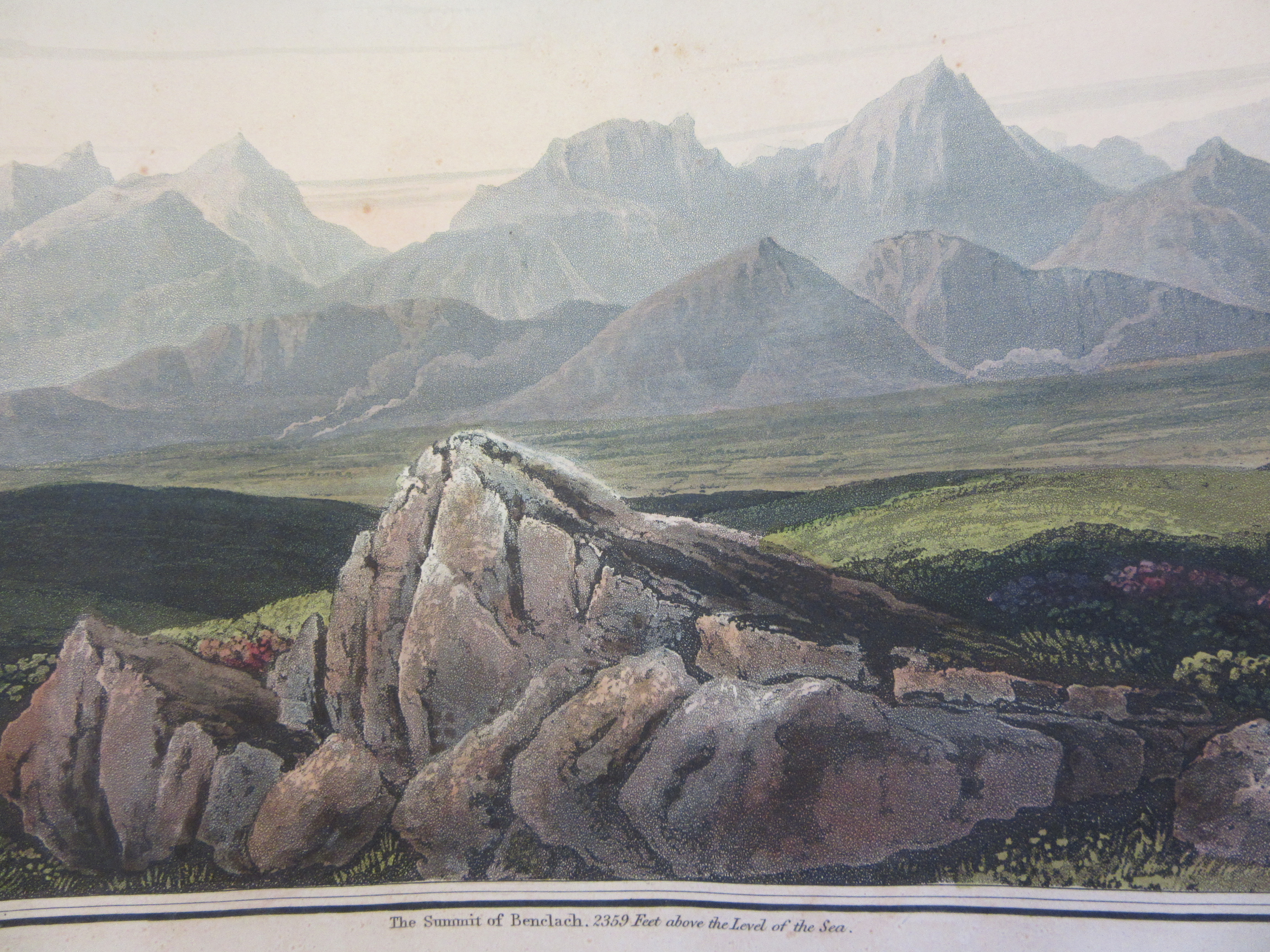 It’s described as “A view of the Grampian Mountains, taken from the Summit of Benclach the highest of the Ochill Hills, a station in the Trigonometrical Survey of Great Britain, situated 28 miles north west from Edinburgh.” There’s a lot of cartographic history packed into that title. The Ordnance Survey has origins going back centuries, but the Roy Map of Scotland from the 1740s and ’50s is often seen as the immediate forerunner to the systematic survey of the whole of Great Britain begun at the very end of the eighteenth century. The survey started at the south coast, mapping the country at 1 inch to a mile, and worked northwards. It took decades to cover England and Wales, and the first published maps OS maps of Scotland were later still. However, the initial Trigonometrical Survey which worked its way up Britain, plotting exact locations by a process of triangulation, had reached southern Scotland by the 1810s. The panorama was both drawn and published by James Gardner, previously “employed on the Trigonometrical Survey”.

From 1823 Gardner was established in London as a publisher and seller of maps, and sole agent for the sale of Ordnance Survey maps; he retired in 1840 and the business passed to his son. The mention of his earlier role as a surveyor probably indicates that the view was made to be accurate rather than simply an artwork, and certainly seems to show a pride in being involved in this great scientific endeavour. There is an outline diagram underneath which names the mountains, settlements and other features, making the panorama informative as well as beautiful. 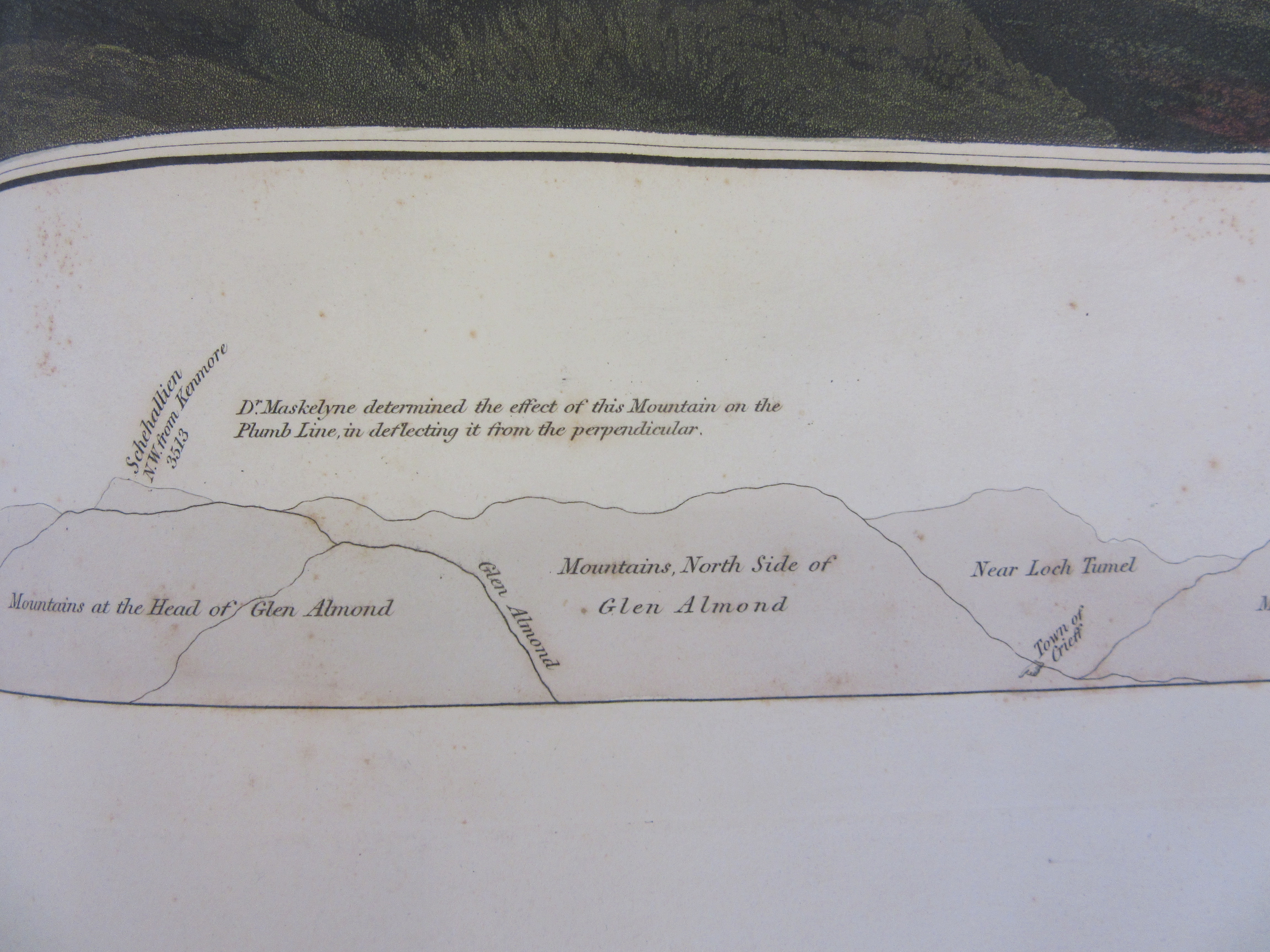 The point of origin is probably Ben Cleuch in the Ochil Hills. There is a note stating that it covers “about 85 degrees of the horizon” – nearly a quarter of a circle, stretched out to a view almost two metres long. The view was engraved by Daniel Havell in London, and printed in colour, a quite early example of a colour lithograph. 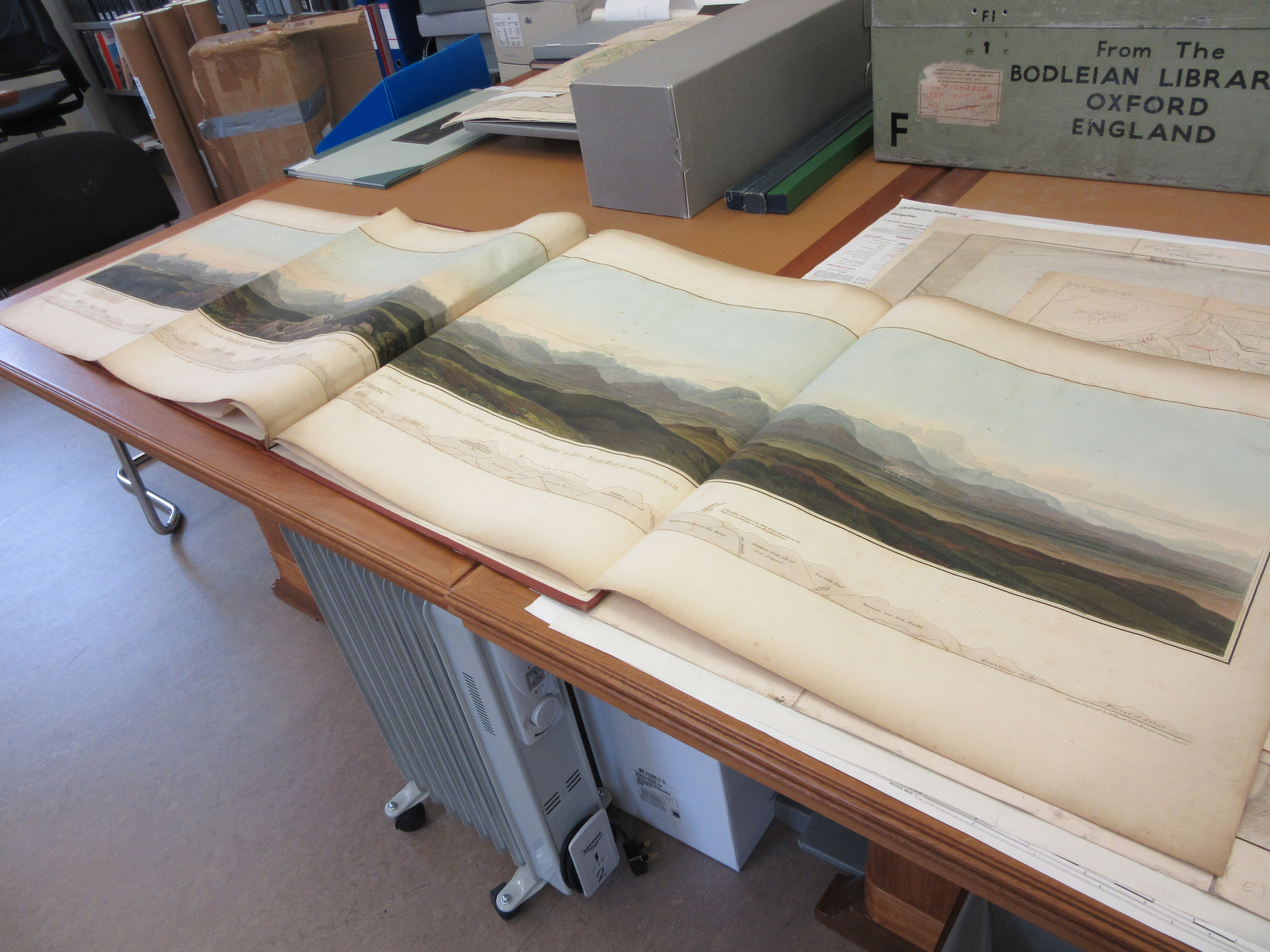 A view of the Grampian Mountains, from the Summit of Benclach the highest of the Ochill Hills / delineated and published by J. Gardner … 1820. C18:5 (93)

What connects contraband, the Magna Carta, one-upmanship and the sin of earthly desire? The answer is Emanuel Bowen’s map from 1733, A New and Accurate Map of England and Wales’. 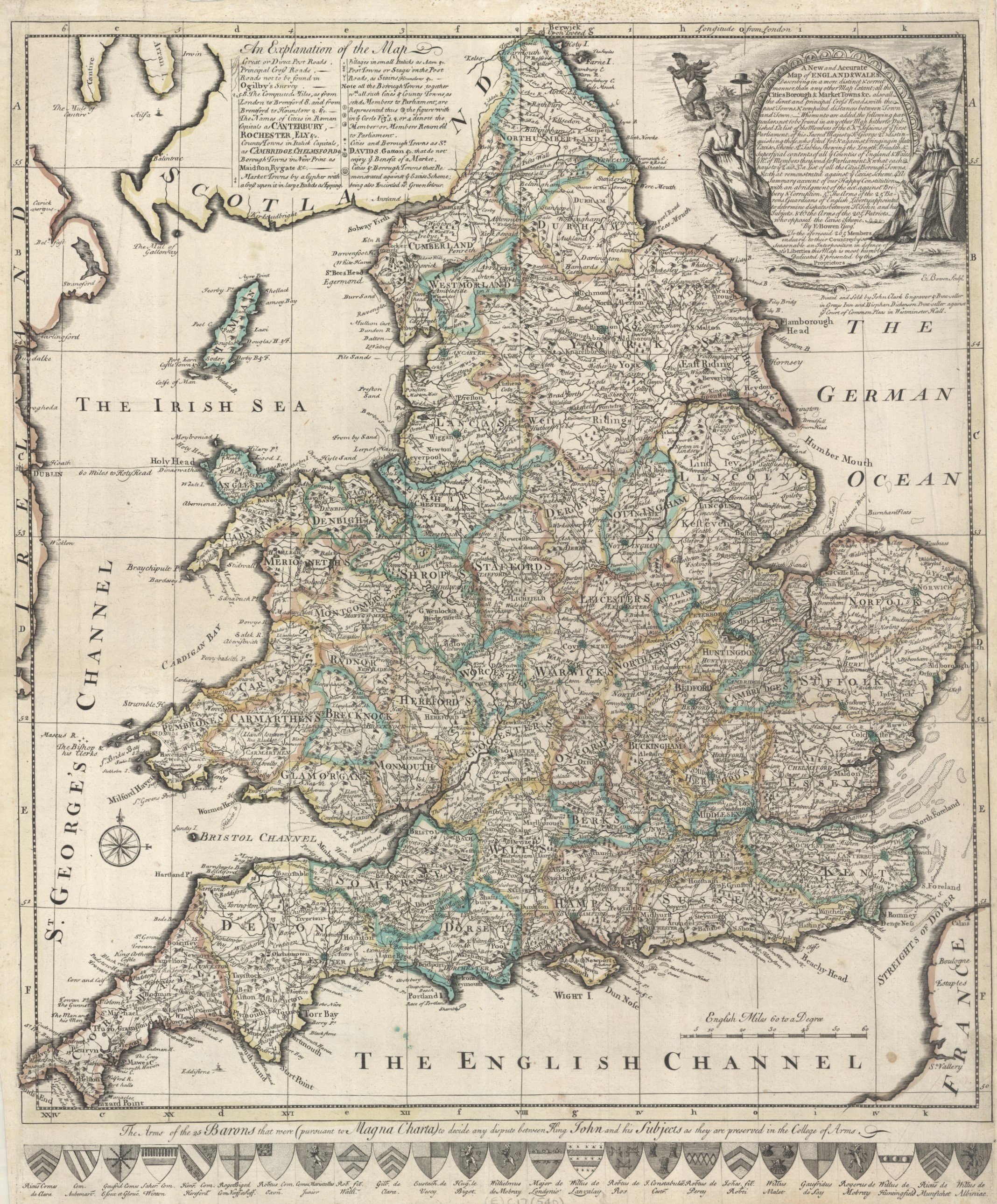 In this map Bowen shows the roads throughout the country, with additional information

on either the map or on the accompanying sheets giving distances from London and whether the roads are post, cross or ‘roads not to be found on Mr. Ogilby’s survey’ . If this was all the map did it would be a very good example of a common road map of the time (Bowen had produced earlier road maps that again had a dig at John Ogilby, with his ‘Britannia depicta or Ogilby improv’d’ set of road maps’ atlas). What sets this map apart from all others is the championing of the Members of Parliament that had recently voted against an Excise Bill. Introduced by Robert Walpole, generally regarded as the country’s first official Prime Minister, the Bill was intended to raise taxes on contraband goods while reducing the taxes of the rich landowners, appeasing those who had the power to vote. The idea that tax officers could go into people’s houses looking for such goods proved so unpopular – William Pitt, MP, led the rallying cry with ‘an Englishman’s house is his castle’ – that the Bill was quickly dropped. Bowen dedicates his map to the ‘the 205 members endear’d to their country by so seasonable an interposition in defence of it’s liberties’.  Bowen further emphasises this sense of liberty by evoking an earlier time when the Crown and right of rule was challenged. The arms of the Members of Parliament that voted against the BIll feature on two accompanying sheets, the coats of arms that appear underneath the map are for those Barons who forced King John to sign the Magna Carta in 1215, protecting rights and restricting the power of the Crown. To make the point further Bowen uses symbolism around the cartouche to reinforce this connection between the 1215 and 1733 opposition to the State and Crown 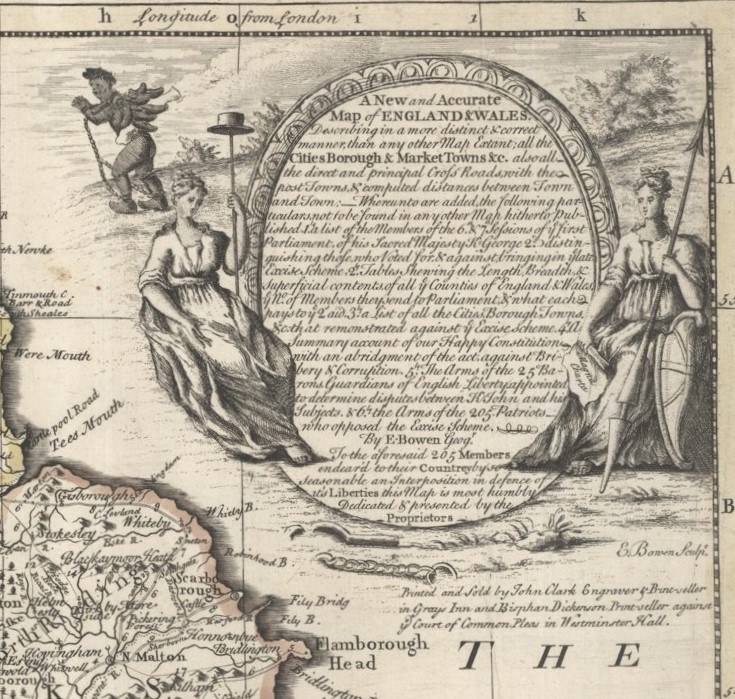 On the left is Liberty, here shown with a staff topped by a Liberty Cap (which dates back to Ancient Rome, and were worn by freed slaves) while on the right is Britannia, holding a copy of the Magna C[h]arta. The chained figure represents man enslaved by earthly desires. Bowen’s opposition to the Bill didn’t do him any harm in the long-run as he eventually became Royal Geographer to George II, despite the King supporting Walpole after the defeat of the Bill and the opposition in both Parliament and on the streets .

The Bodleian has four copies of the Magna Carta, the earliest from 1217, which can be viewed here

The ‘Mr Ogilby’ derided at every opportunity by Bowen is John Ogilby, who in 1675 published the first set of road maps done as a set of strips. Ogilby’s work was revolutionary, but due to reasons possibly nefarious left out some routes, more on his story can be found in an earlier blog here