Geological maps are often some of the most colourful and striking in the collection, especially the early ones on which the different rock types are coloured by hand. Luckily the Map Room receives all the geological maps published in the UK on Legal Deposit (as discussed a couple of weeks ago in this post on electronic Legal Deposit).

Research has been structured differently over the years, and at one time a large quantity of nineteenth century scientific mapping was transferred from the central Bodleian Library to the Radcliffe Science Library. Most of these maps have now been reunited with the rest of the map collection in the Bodleian Map Room, and a set of 39 large bound volumes of early geological maps has just been fully catalogued to modern standards. They include horizontal and vertical sections, detailed large scale geological mapping of certain counties, studies of areas of particular geological interest as well as standard series mapping of the British Isles at one inch to a mile. They have considerably enhanced the collection of early geological mapping. 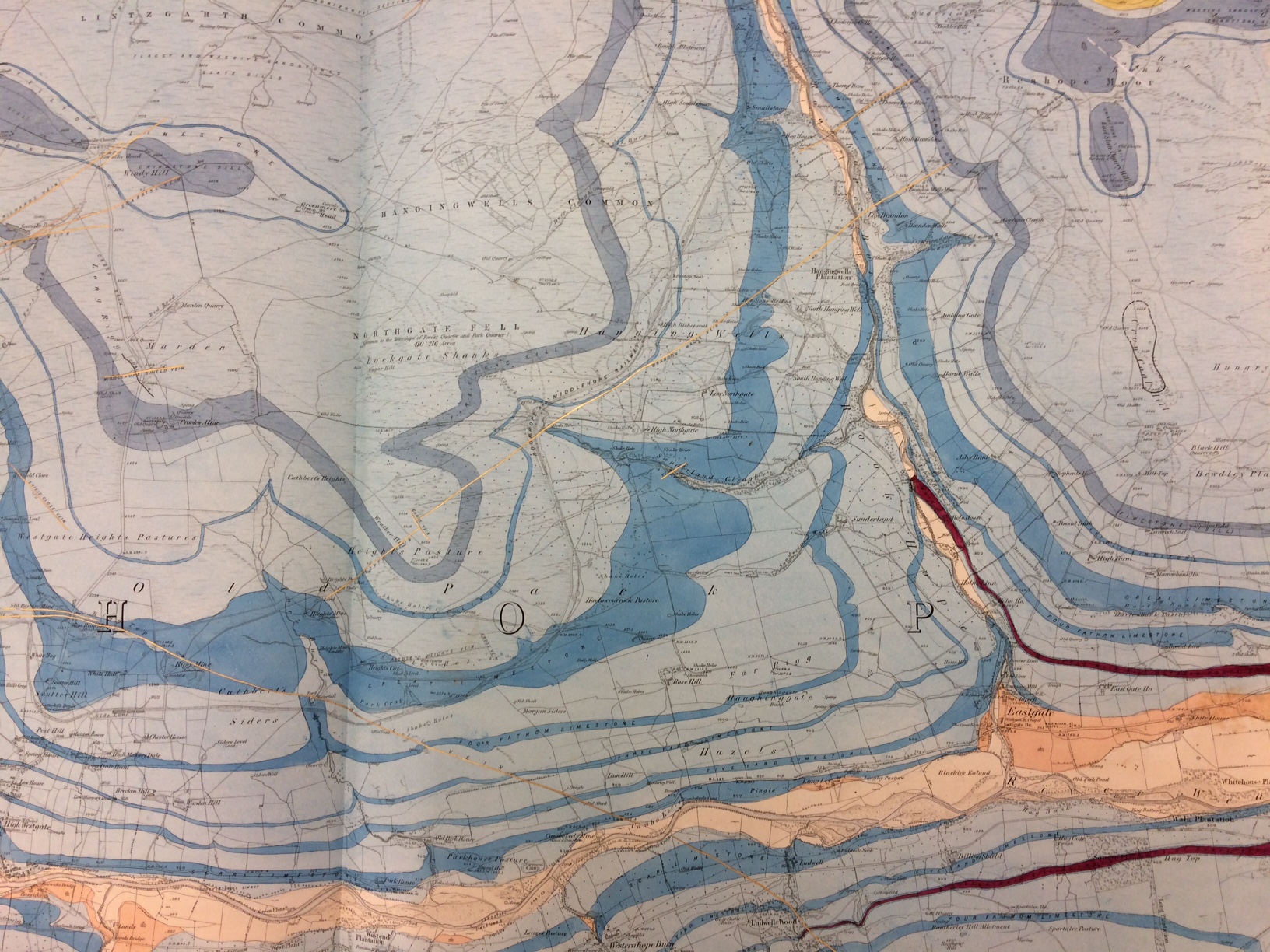 Some of the most striking are detailed geological maps at the large scale of six inches to a mile; these are available for a few counties across England and Scotland. Most of the maps were based on Ordnance Survey mapping, made by military surveyors as early as the 1850s; the geological survey might be 20 or more years later.The early sheets were coloured by hand, often in astonishingly bright colours. This map of the area around Eastgate in County Durham was geologically surveyed in 1876-1877, published 1880. It’s at a scale of six inches to a mile. Paler blues represent sandstone and shale and the darker blue limestone, with basalt standing out in a vivid red; coal seams are picked out in gold. The maps were published by the Ordnance Survey.

The names of the geological surveyors for each sheet are generally recorded; this particular sheet was “geologically surveyed in 1876-77 by D. Burns, W. Gunn and C.T. Clough … under the superintendence of H.H. Howell.” The same names often come up repeatedly on many sheets. Fortunately, researching them is easy on the Pioneers of the British Geological Survey pages provided by the BGS Earthwise site. This has biographical information for dozens of early surveyors, sometimes including education, publications and even photographs of them in action. 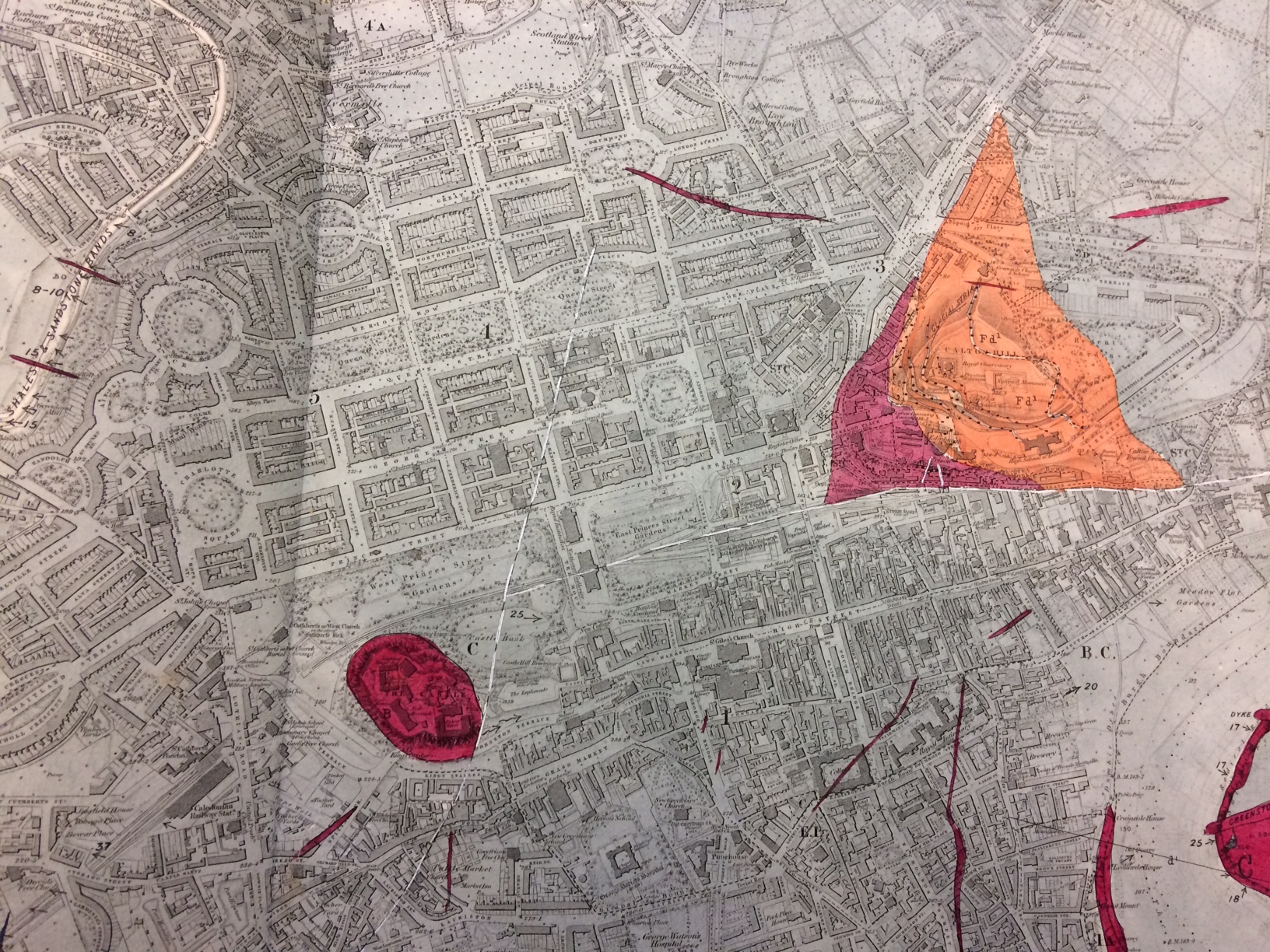 The underlying geology of an area obviously has a profound effect on its landscape. This detailed geological map of Edinburgh from 1864 shows how the area around the castle, which is on a conspicuous hill above the city, is on basalt; the observatory is on another hill (mainly of felstone, now usually known as felsite, another igneous rock) to the east, while most of the surrounding area, coloured in grey, is sandstone. 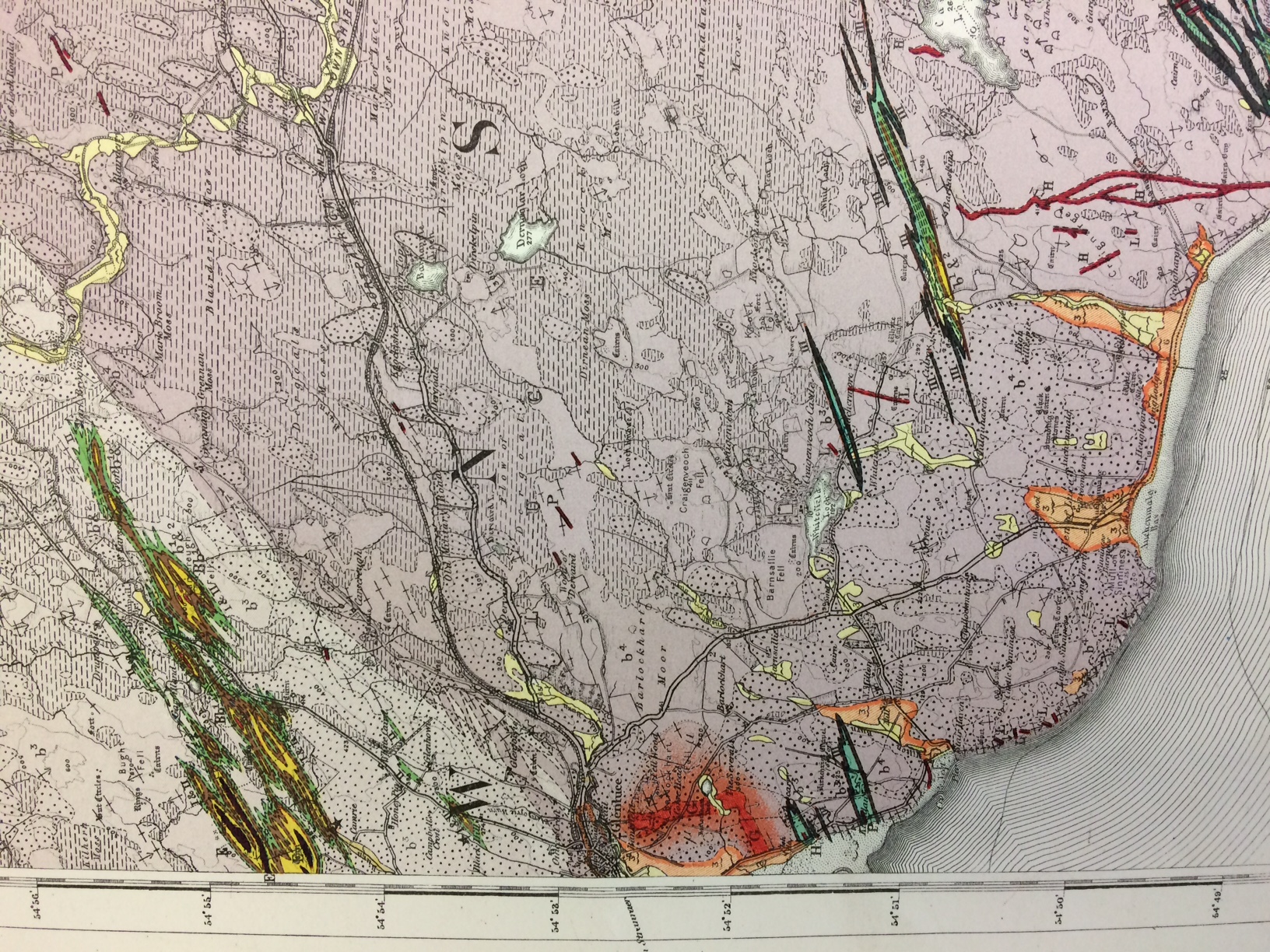 These nineteenth century maps continued to be reproduced and updated well into the twentieth century, although the colour has long been printed rather than done by hand. This extract is from a one inch map of the area around Wigtown, first geologically surveyed in 1877 although this map was published in 1925.  The Map Room already held a considerable collection of these maps which has been augmented by the addition of the early volumes of geological maps. Modern geological maps continue to be published by the British Geological Survey at the slightly larger scale of 1:50,000.

Young friends! This illustrated atlas of the Kiev region of Ukraine is a wonderful mix of both thematic and topographic maps and guides for young cartographers and naturalists. As the translated introduction says ‘This atlas is for those of you who are interested in geography and history, love nature. Explore your homeland in local history hikes and excursions’. The front cover has one of our young outdoor explorers striding out, his rucksack the outline of the Kiev Oblast. 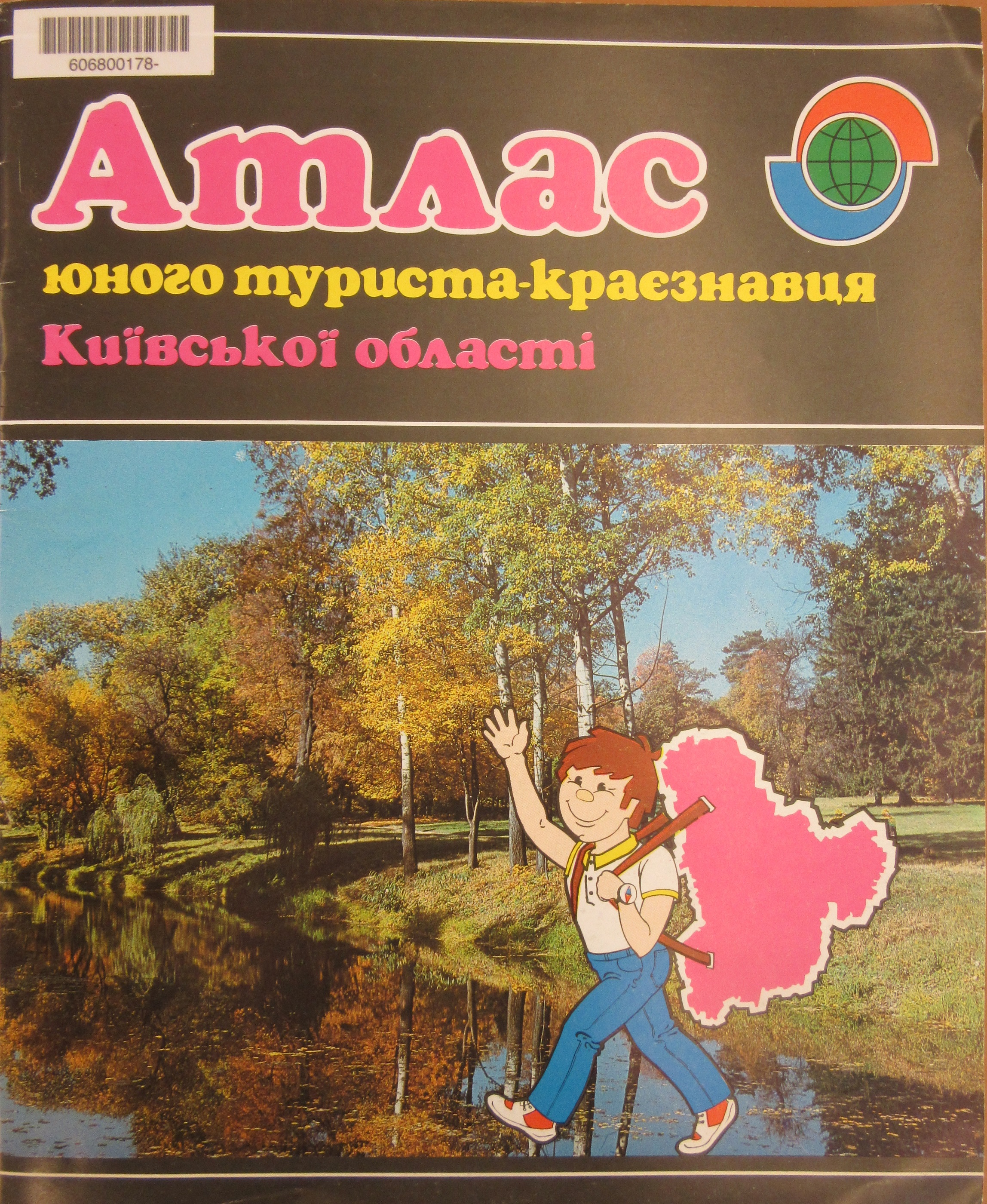 Each double spread has a map or maps on the left with an illustration on the right of children doing something linked. So for instance where there is a thematic map on fauna, including diagrams for different bird boxes and animal prints, opposite is a picture of our naturalist heroes bird-spotting (Практичні поради юним біологам, or ‘Practical advice for young biologists). 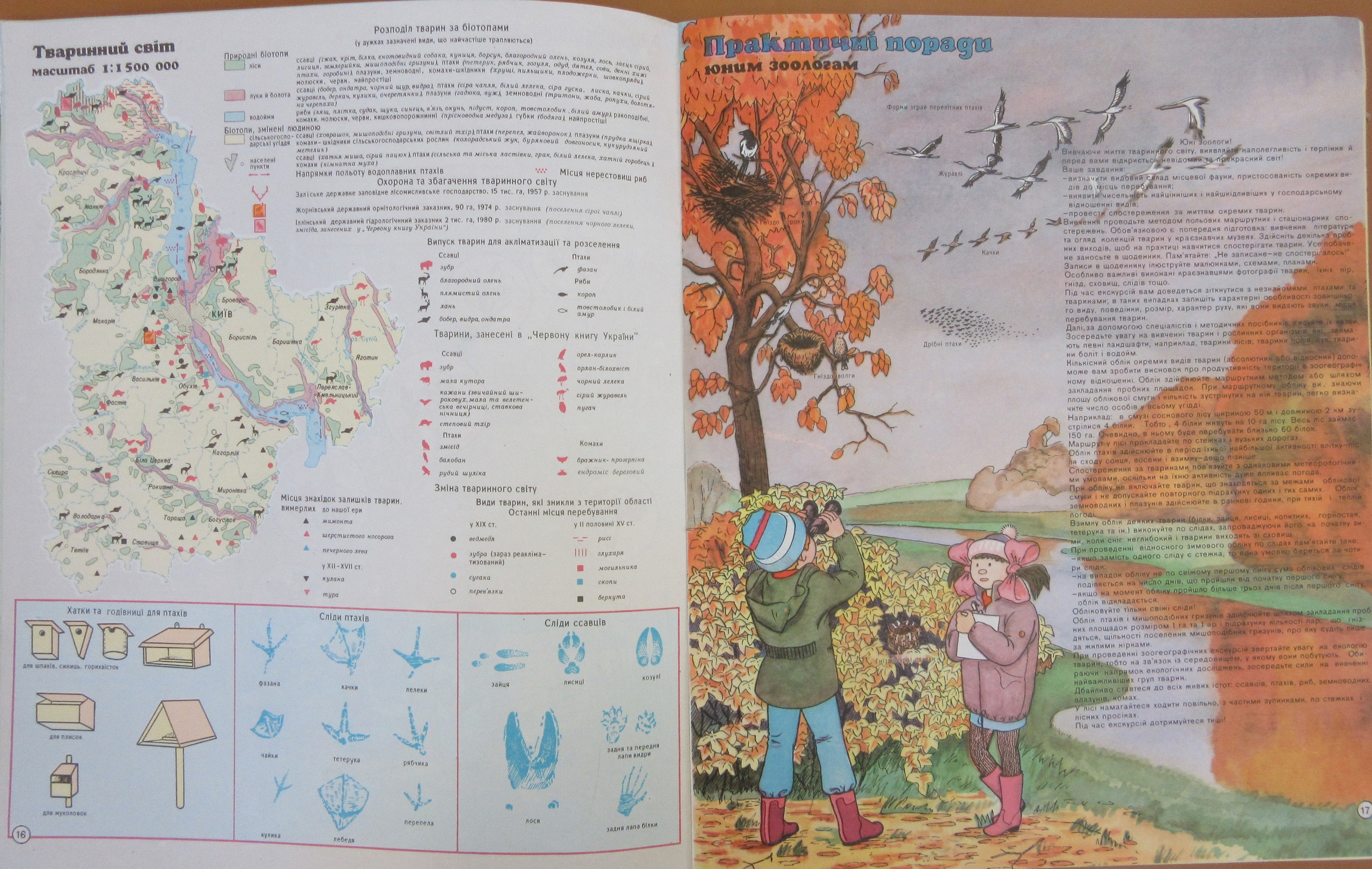 There are pages on weather and climate, flora and minerals, along with topographic maps and town plans. The atlas is published by the Main Department of Geodesy, Cartography and Cadastre under the Cabinet of Ministers of Ukraine in 1997. 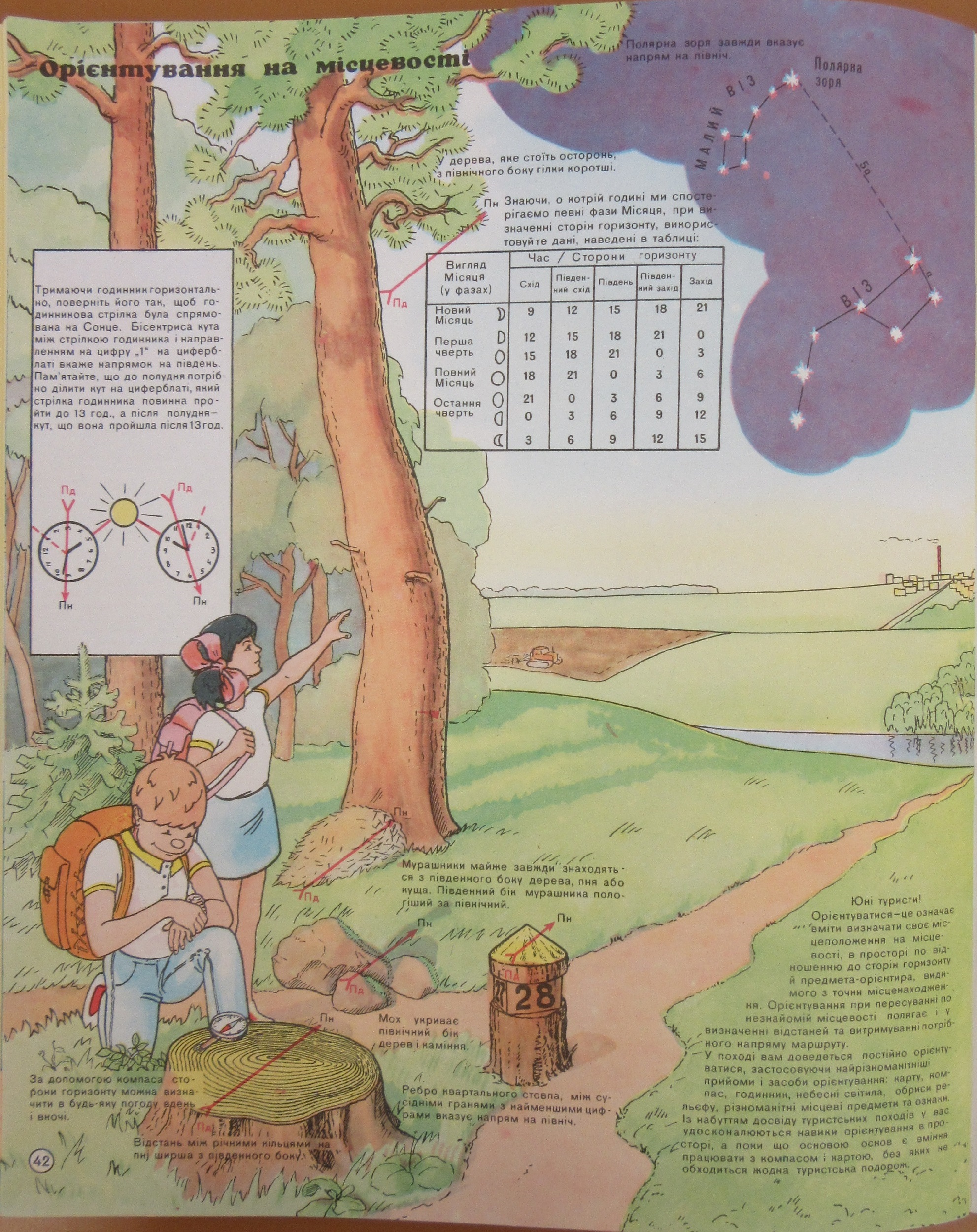 The atlas also includes illustrations and text on surveying techniques and, shown here, orienteering. Text above the star chart in the top corner shows how you can find north by looking for the Big and Little Dipper in the sky, while notes on the ground explain how studying the landscape can help find direction (мох укривае піеічний біх дерее і каміння, or ‘moss covers the north sides of trees’, for example). And then, finally, the healthy benefits of being a ‘young tourist’.

If you want to see what your town looked like 50 years ago, or even 150, the Map Room can find you a detailed Ordnance Survey map to answer the question. And if you want a really large scale plan showing the same site in the present day, you can buy one via an agent for OS Mastermap. But what about the period in between? 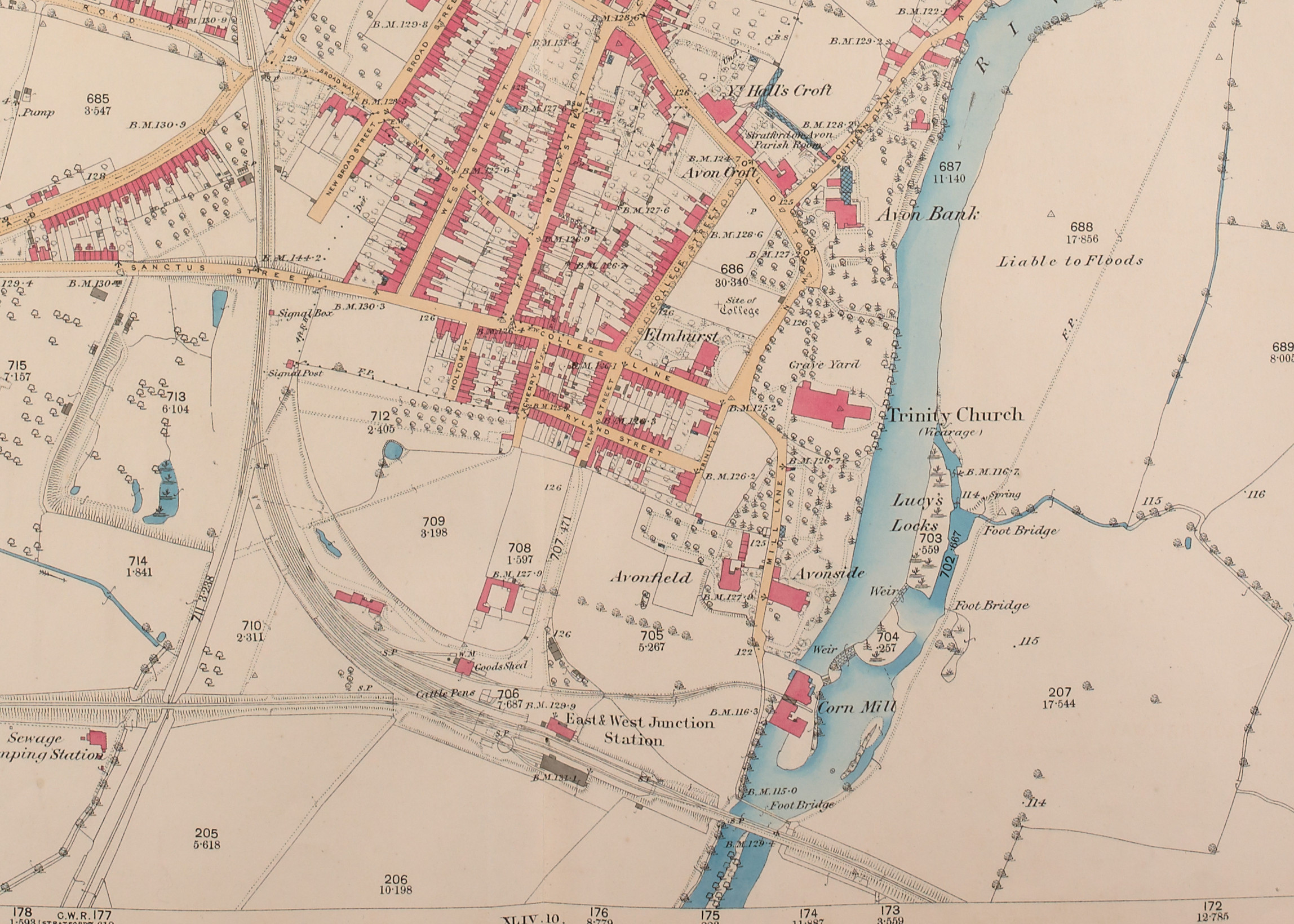 The OS map extract above shows Stratford-upon-Avon in 1889 at a scale of 1:2500. Maps at the same or larger scales continued to be published, updated at intervals, until the late twentieth century. In the 1990s, the OS stopped producing printed maps at the largest scales of 1:10,000, 1:2500 and 1:1250. Present day large scale mapping continued to be produced in digital format, and could still be purchased, but each time the data was updated the previous version was lost. There was a danger that recent history would disappear into a black hole. If a researcher in 2022 wanted, for example, an OS Mastermap of Kendal from 2012, what would they do? 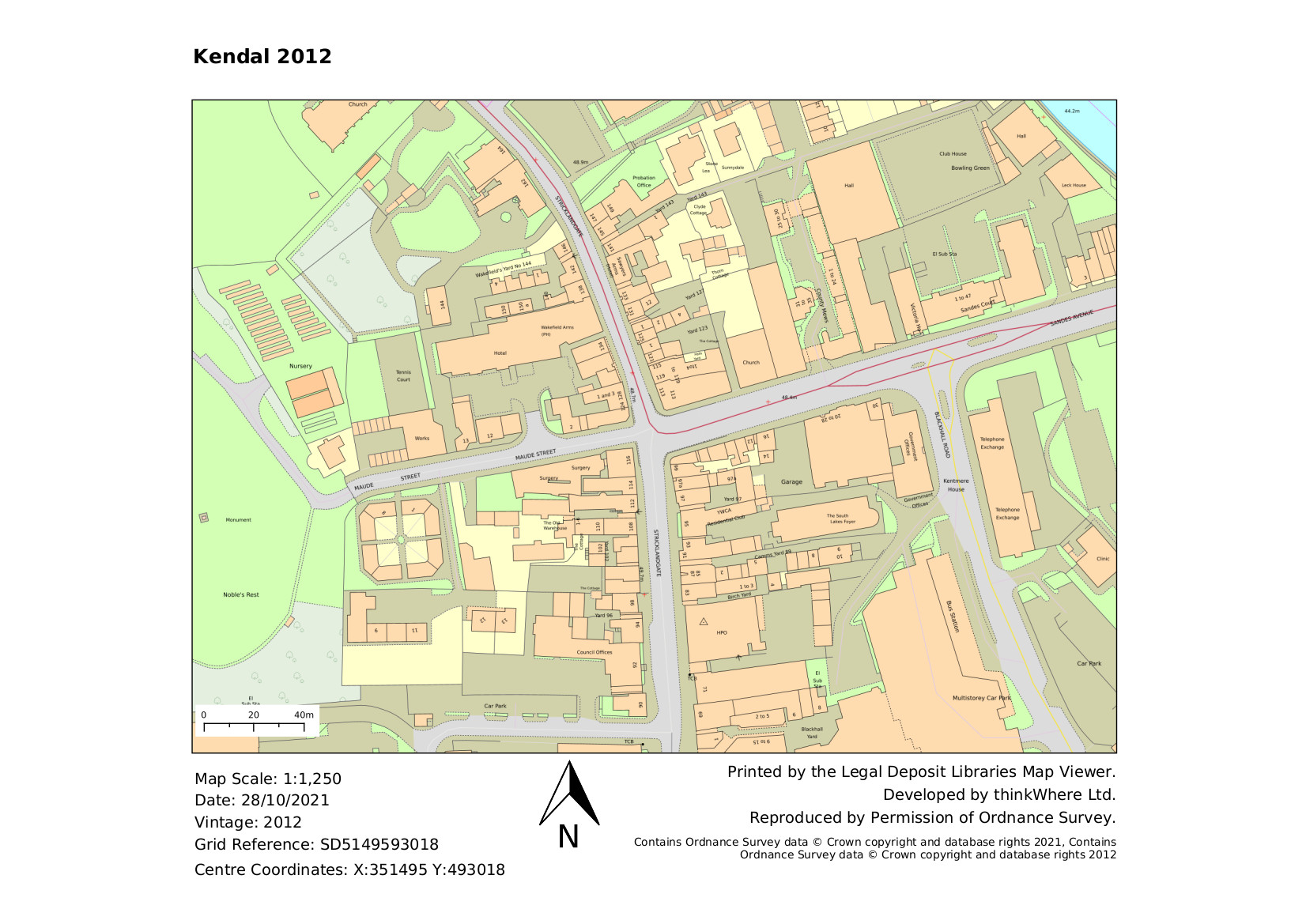 The Legal Deposit Libraries – of which the Bodleian is one* – sprang forward to fill the breach. Working with partner organisation thinkWhere, they negotiated a scheme for the OS to deposit an annual digital “snapshot” of large scale mapping across the whole of Great Britain from 1998 onwards. Northern Ireland, which has its own mapping agency, soon followed suit. The dataset is updated annually. It was an early example of electronic Legal Deposit, preceding the official eLD which began in 2013.

This has recently been updated with a much wider range of maps; as well as the large scale OS maps described above you can see a whole array of different maps of the UK here. There are detailed town plans by XYZ Maps and The Clever Little Mapping Company, large scale coastal charts by Antares, and a wealth of cultural information. There is information from Historic England showing locations of all the listed buildings geographically plotted with links to the website, descriptions and images; Historic Environment Scotland and Welsh preservation organisation CADW show similar information for Scotland and Wales. Also included are World Heritage sites, protected monuments, battlefields and shipwrecks.  The map below shows the locations of listed buildings in Portsmouth. 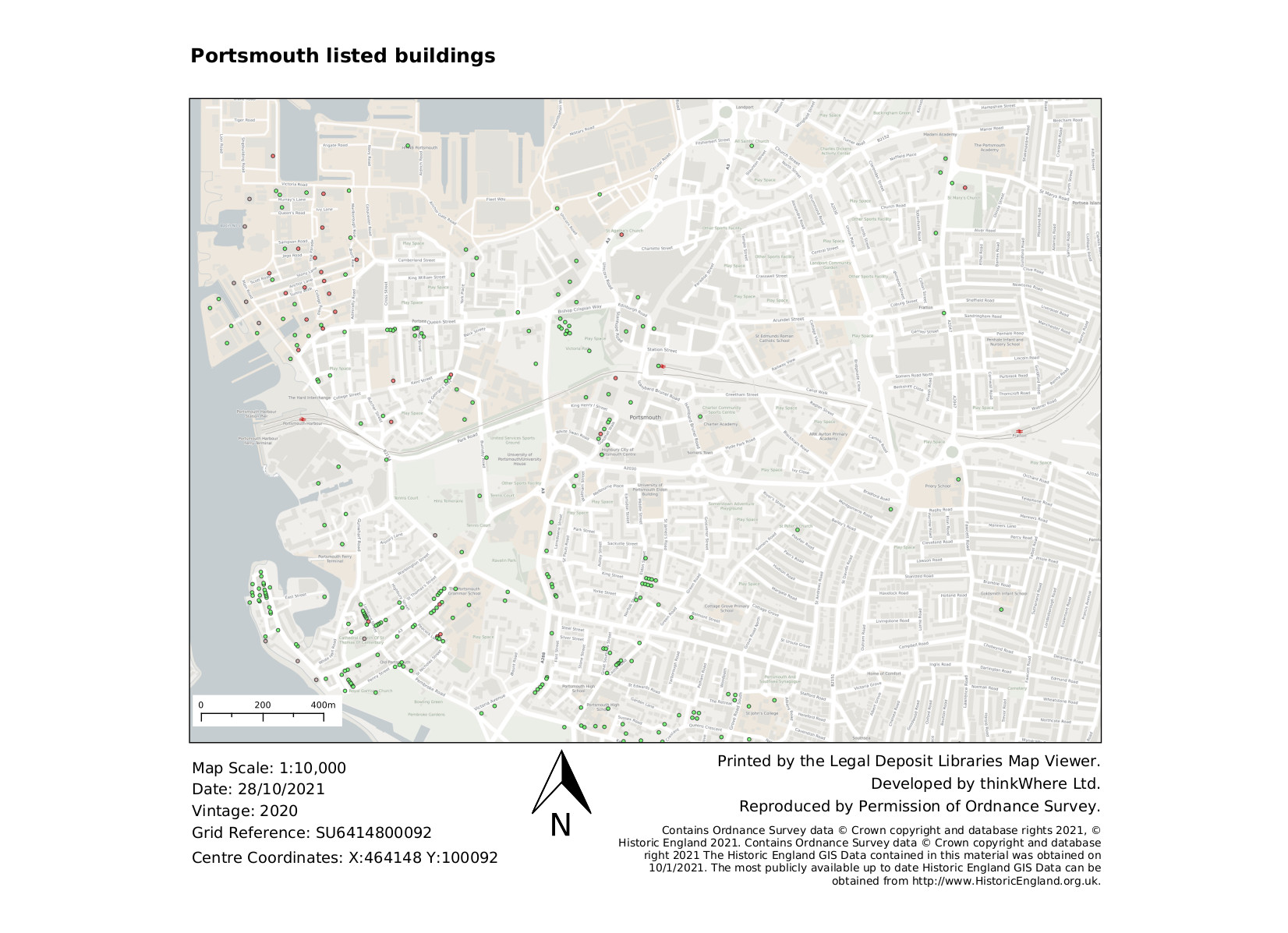 The maps so far are almost exclusively for areas within the British Isles, but the system is set up to give access to maps from anywhere in the world via a map interface. As an increasing amount of publication is now digital rather than printed, this can only grow.