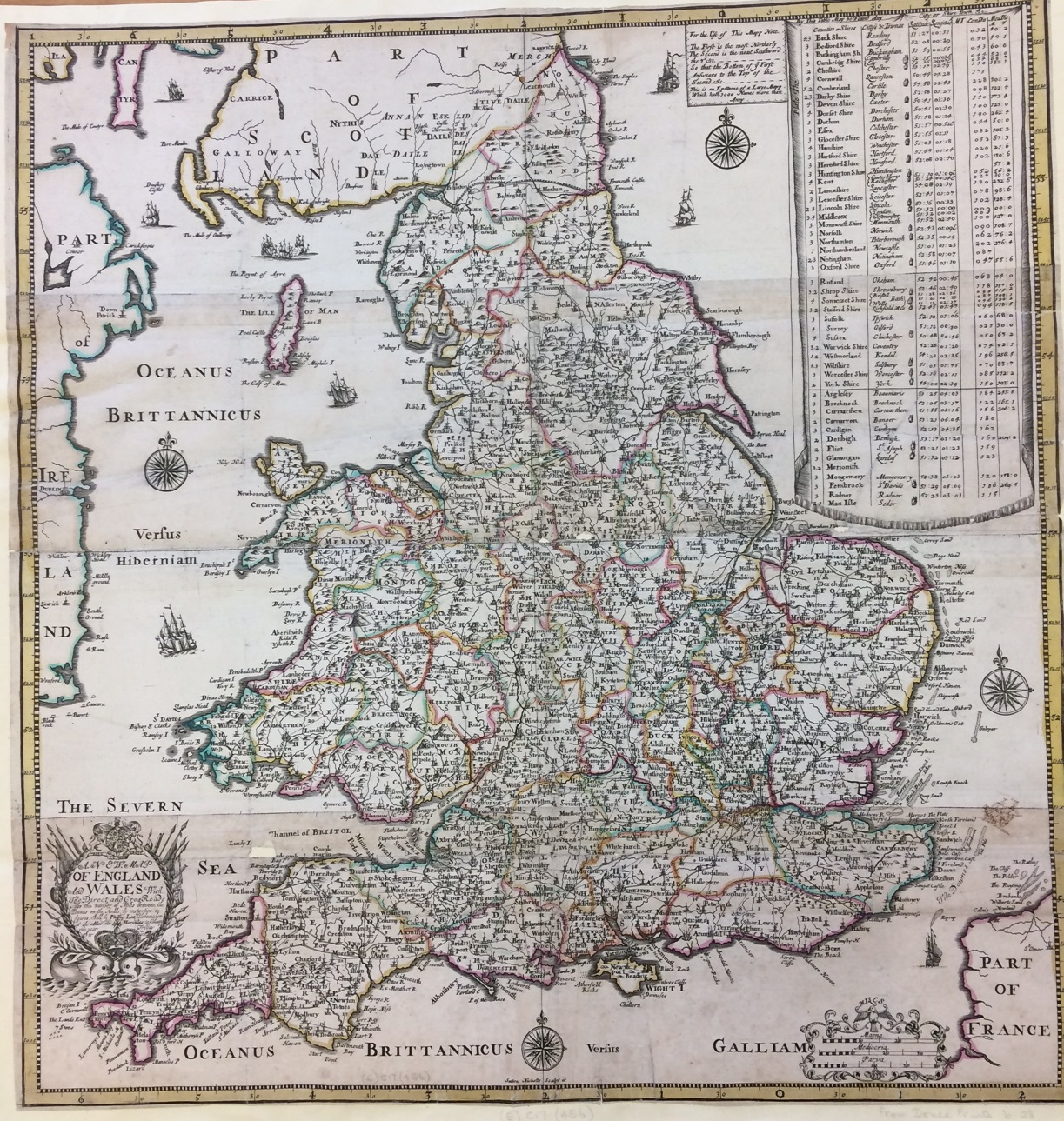 Our previous blog dealt with some of the first road maps aimed at motorists in the early twentieth century. Although people have been travelling by road for thousands of years, road maps themselves are a comparatively recent invention. Until the 1670s and the advent of John Ogilby’s strip maps, most maps did not show roads, Once the idea had been established it was soon extremely popular; it was widely copied in Britain and elsewhere. Amongst the many maps of the roads of England produced in the late seventeenth century, this is a particularly decorative example. 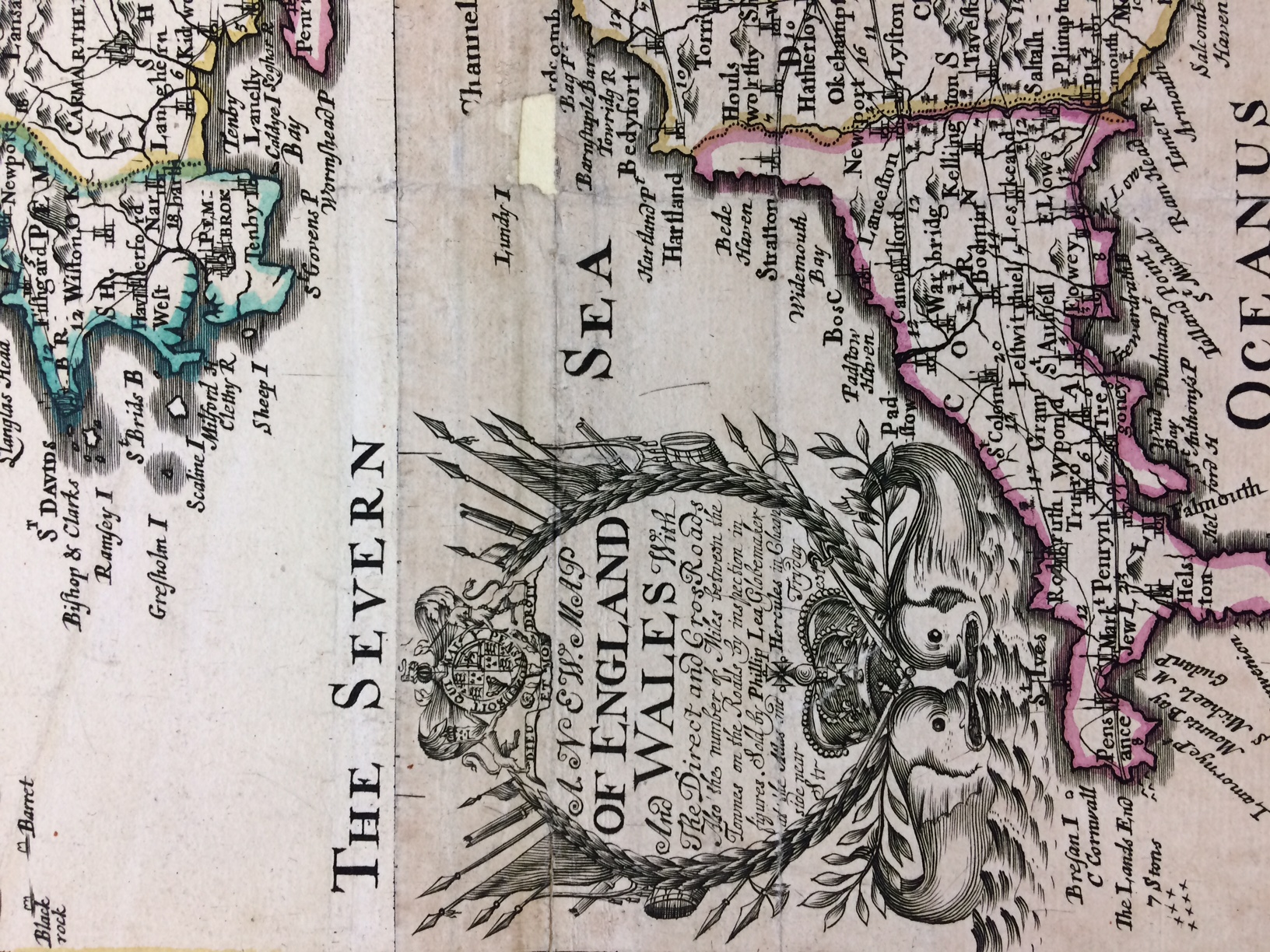 The map is titled “A new map of England and Wales with the direct and cros roads” (cross roads were those linking between the main roads). Distances between settlements are given in miles. Hand colouring of the county boundaries enhances the map but does not detract from the details. Beneath the decorative and closely written cartouche, two angry sea monsters are having a face off. The cartouche explains that the map is “Sold by Philip Lea Globemaker at the Atlas and Hercules in Cheapside near Fryday Street” (addresses were more fun in those days). 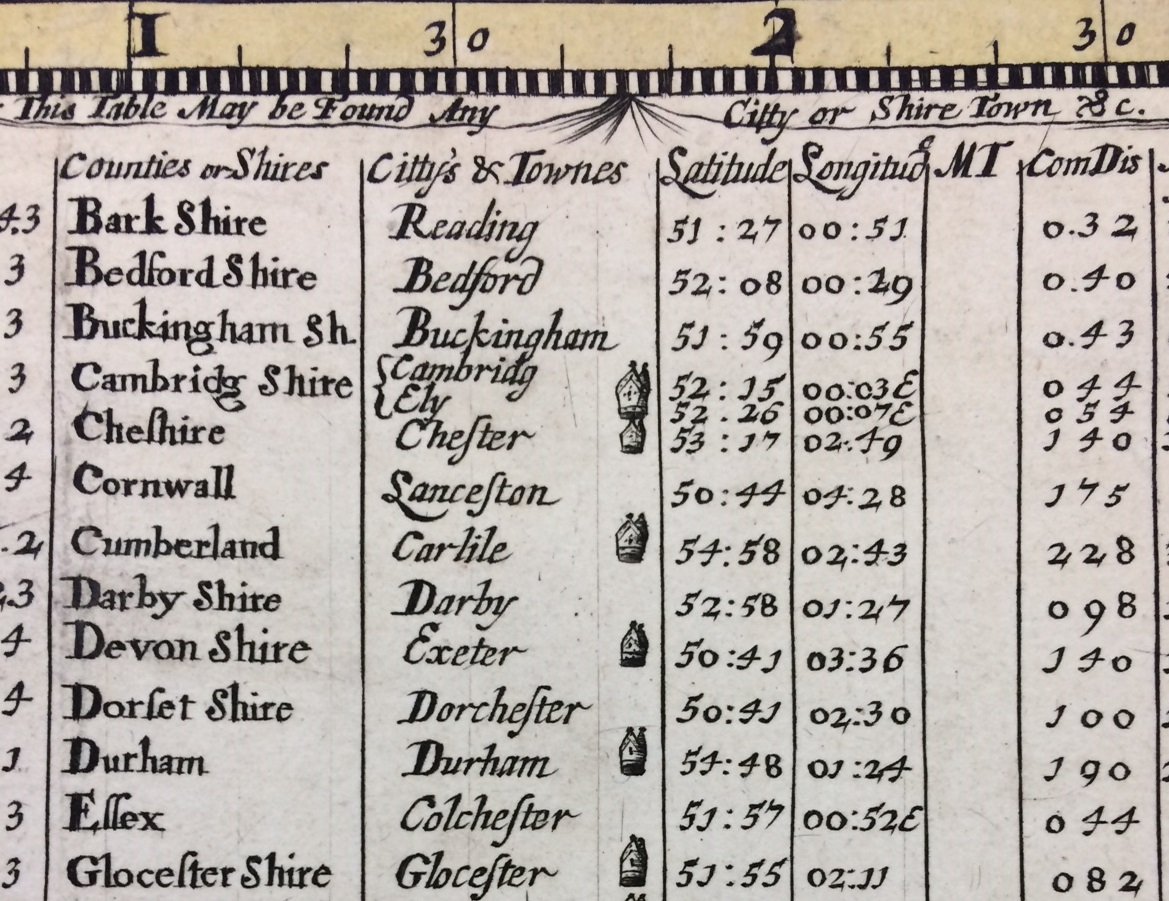 Top right there is a table with information about the counties, including the county town for each one; where this was a cathedral city there is a tiny picture of a bishop’s mitre to accompany the name. 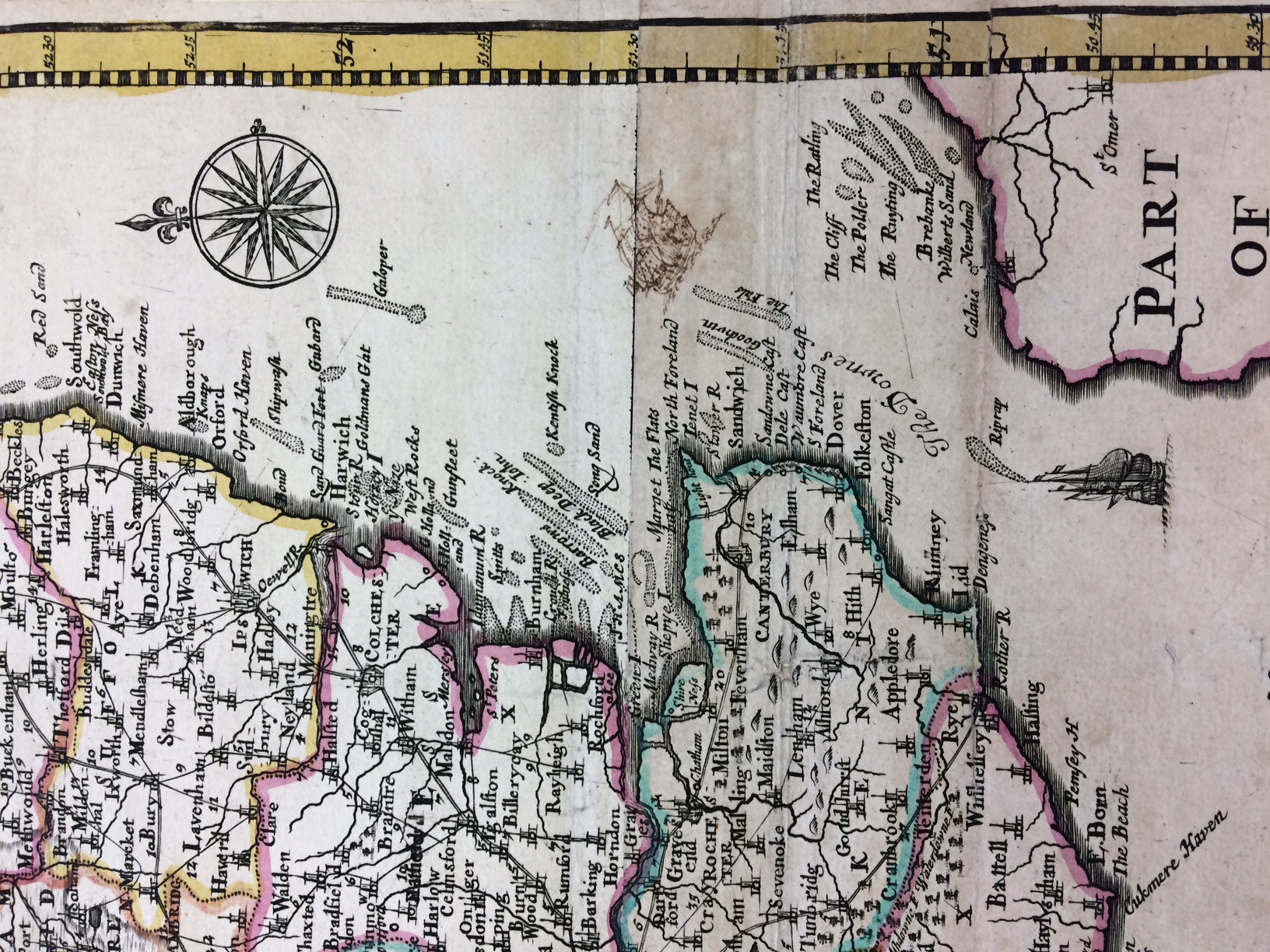 The sea is illustrated with small pictures of ships, as was popular on maps of the time. More unusually, a previous owner of the map has tried their hand at reproducing one of these, and a tiny pen and ink sketch of a ship appears in the Channel along with the printed illustrations.

The map was originally published by Phillip Lea around 1689, in an atlas of England and Wales consisting mainly of Saxton’s county maps. This in itself is remarkable since Saxton’s maps were first published in the 1570s; over one hundred years later, the plates were still being updated, edited and reused (in fact their final use was not until about 50 years after this). To accompany these county maps, Lea included two maps of the whole of England and Wales: one general one, and this one which focused on the roads, thus bringing the atlas thoroughly up to date. It was also sold in a slightly later state as a separate sheet, and was available in four separate strips for greater portability; on the complete map, the joins of the four strips are clearly visible.

A new map of England and Wales with the direct and cros roads : also the number of miles between the townes on the roads by inspection in figures. [London] : Sold by Philip Lea Globemaker, [1689?]. (E) C17 (456)

The advent of motoring as a popular pastime allowed publishers to add a new angle to their map sales, the map specially designed for the Motorist. This cover from an early example (Bacon’s new half-inch maps for cyclists and motorists, circa 1908) shows a view of a new open-topped car with it’s wealthy owners out for a nice jaunt on well-lit streets, accompanied by that other new phenomenon (and additional new source of revenue), the cyclist. But included in this idealised view is a warning, for the map shows ‘Danger hills’. 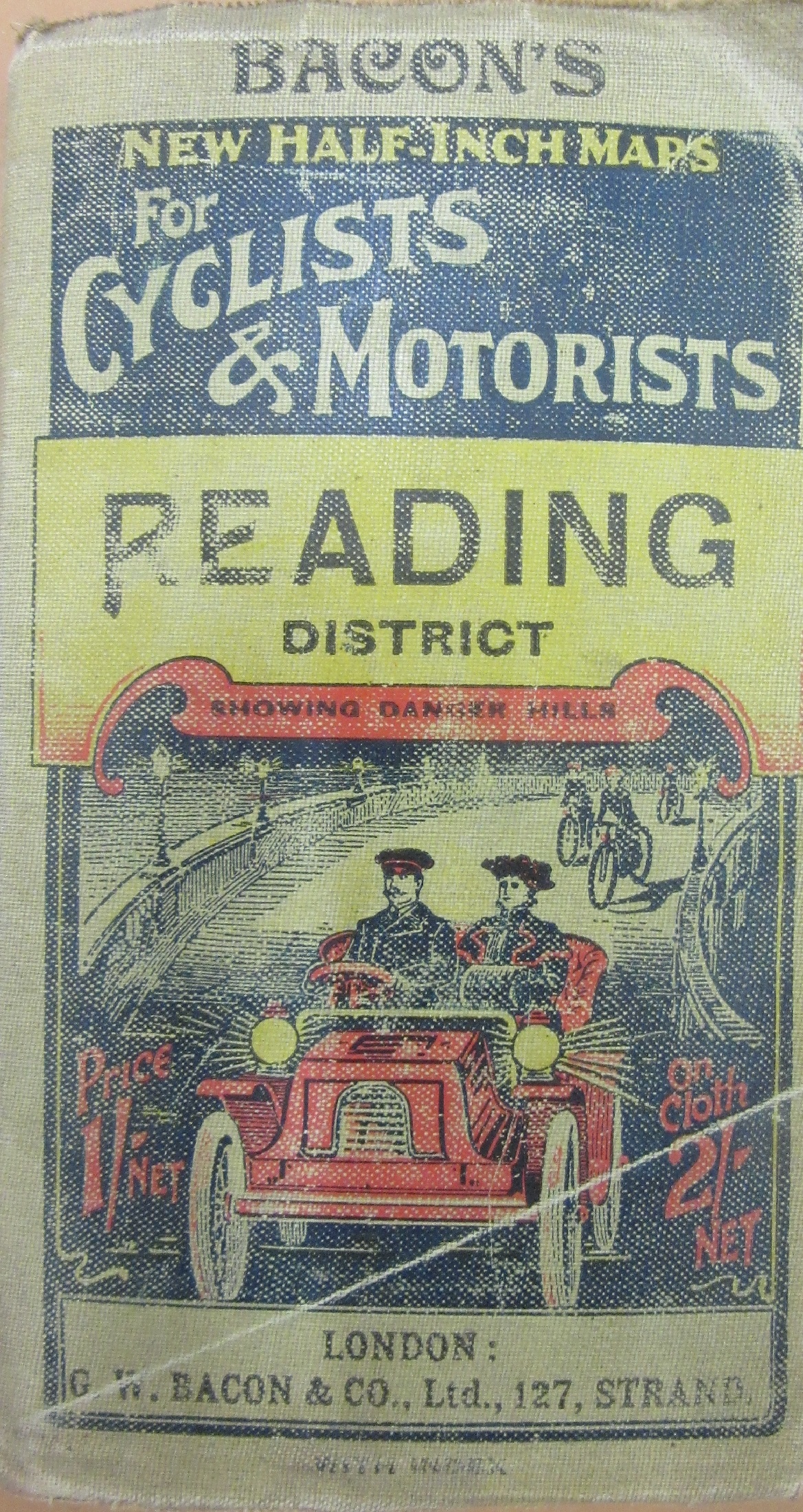 The first cars started to appear on British roads in the mid 1890s, a mixture of imports from France and Germany and home-made efforts, with maps specifically aimed at motorists appearing soon after. These were often reprints of earlier maps with additional titles and, in many cases, some new information relevant to this new form of transport. In the case of the Bacon map this was the highlighting of dangerous and steep hills, with arrows indicating different degrees of steepness. This extract from the map shows the Marlborough Downs, with the fluted arrows indicating a steep hill and the non-fluted indicating hills to be approached with caution. 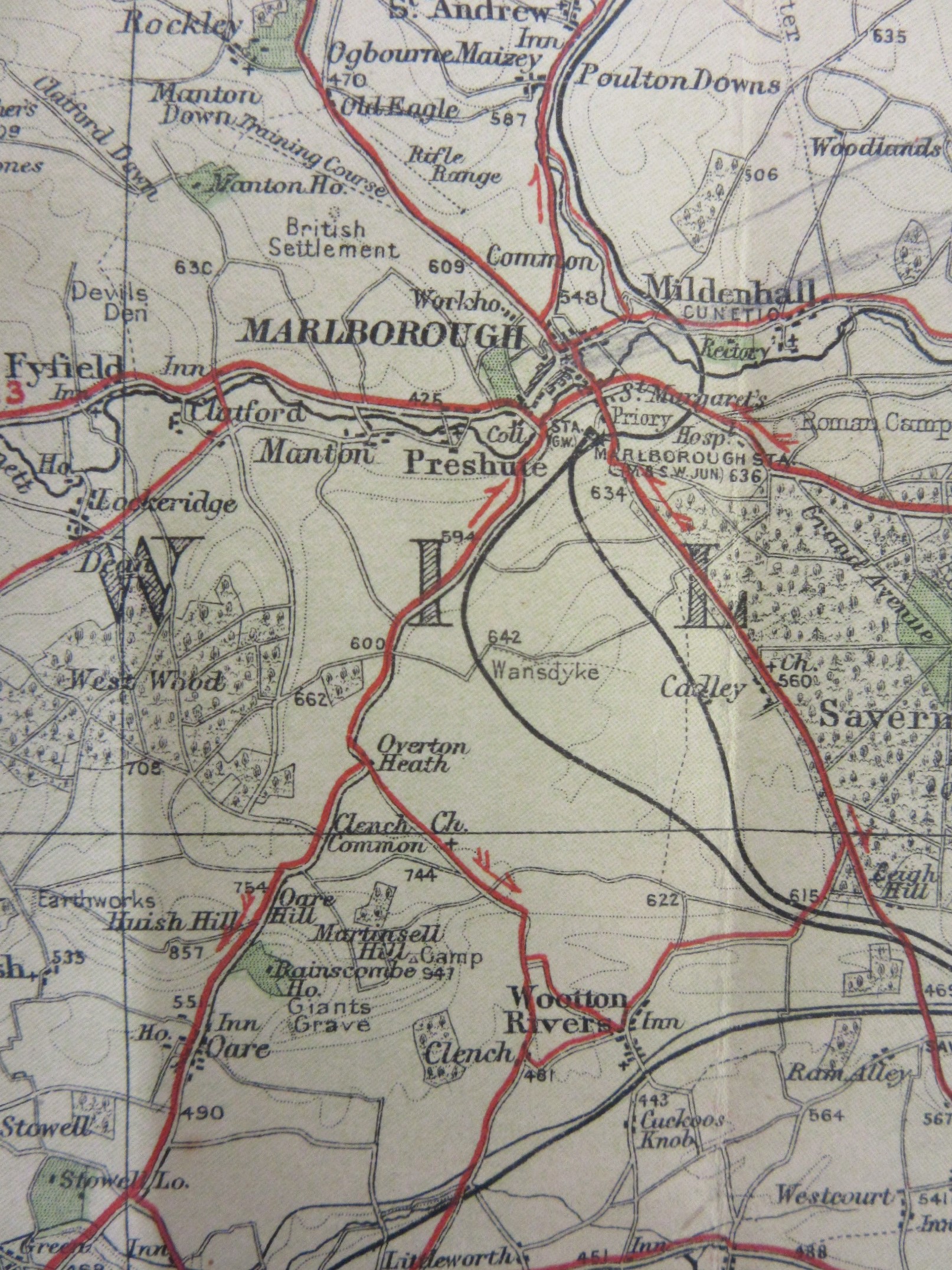 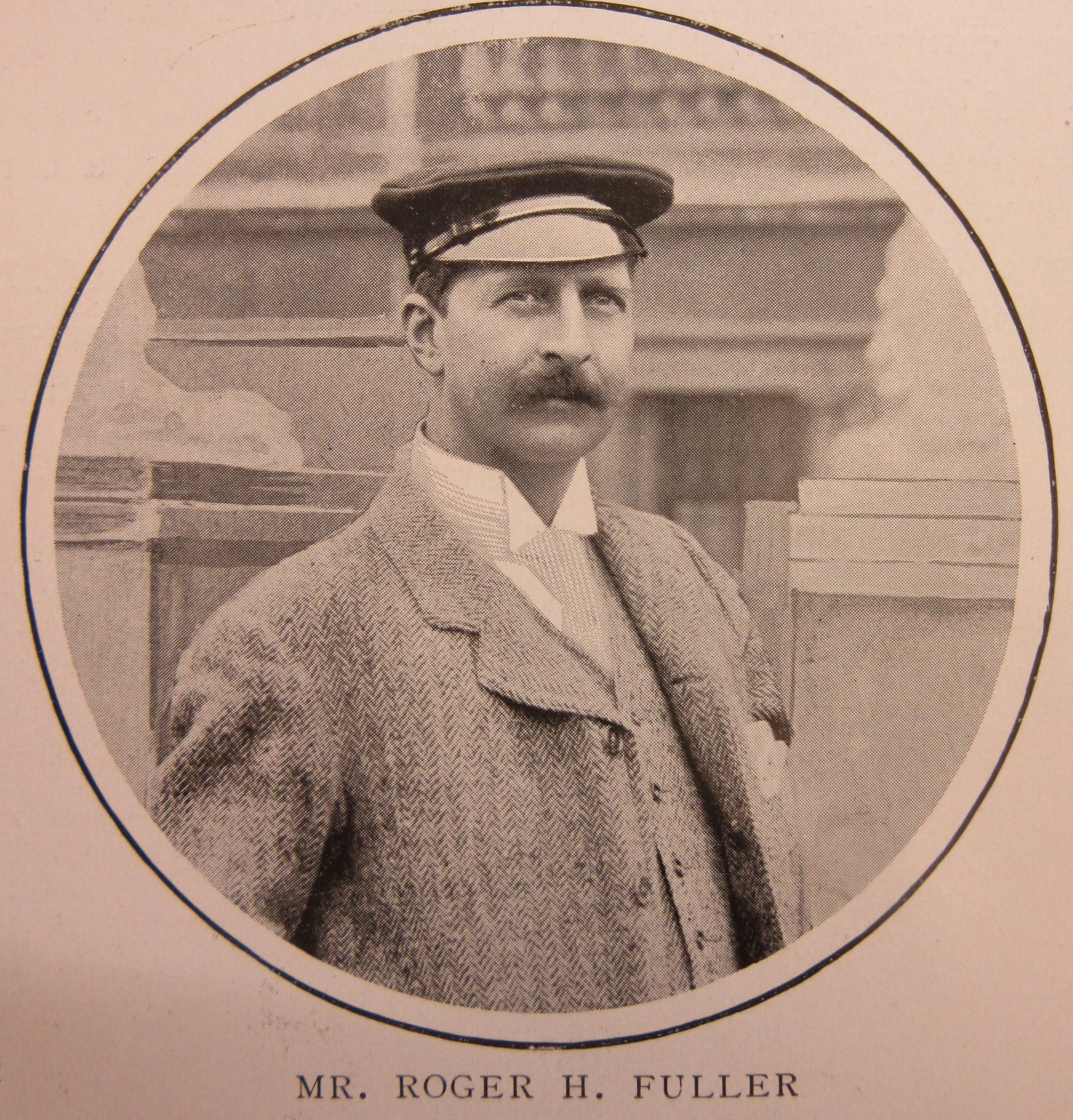 The danger seems to have been just as likely to be having a car with enough horse power to ascend such hills as to the danger of any physical harm involved. Luckily the car on the cover looks like, according to ‘Cars and how to drive them, Part 1‘ (1903, 384415 d.11), the French model De Dion-Bouton. According to the well-whiskered Mr. Roger H. Fuller, author of the chapter on the De Dion, the car is not only one of the most popular of the ‘modern light car’, with over a 1,000 now in Britain but, with 8 horse power ‘is speedy, its hill-climbing powers are hard to beat, and it is preferred by many who can afford a more costly car’. 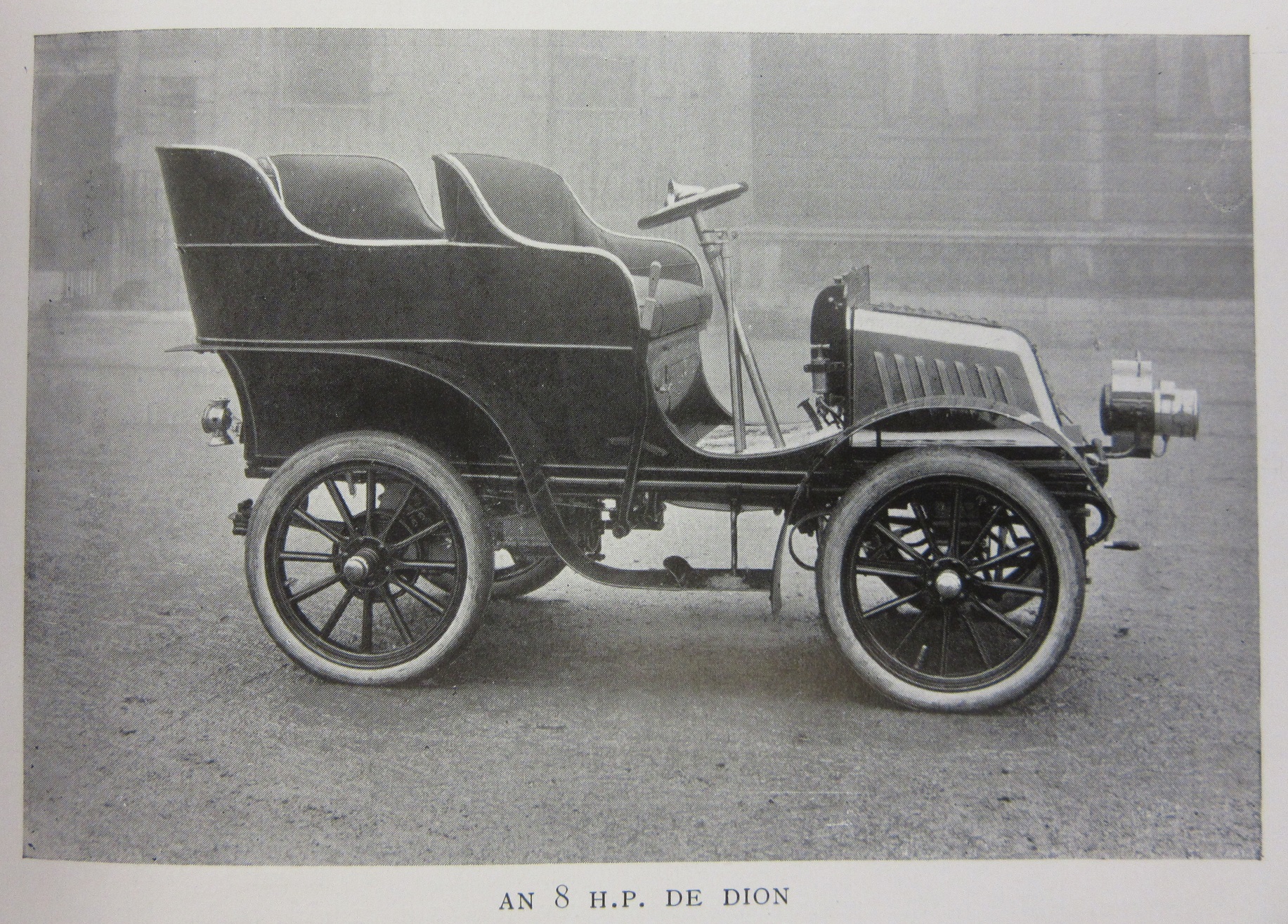 In contrast to the Bacon map is the Ordnance Survey equivalent at the same scale (both maps are 2 inches to a mile, 1:126,720). This map offers no extra thrills, the cover is plain with title and diagram showing neighbouring sheets only, nothing to tempt the motorist into thinking this is something aimed at them.  This extract shows the same area, and while there are no indicators of anything dangerous the cartography on show is both more aesthetically pleasing and better laid out than the Bacon version, even if that is ‘Reduced by permission of the New Ordnance Survey’. This is evident in the way that both maps show relief. Both use contours and spot heights but the use of shading on the Ordnance Survey gives an immediate and pleasing sense of terrain. 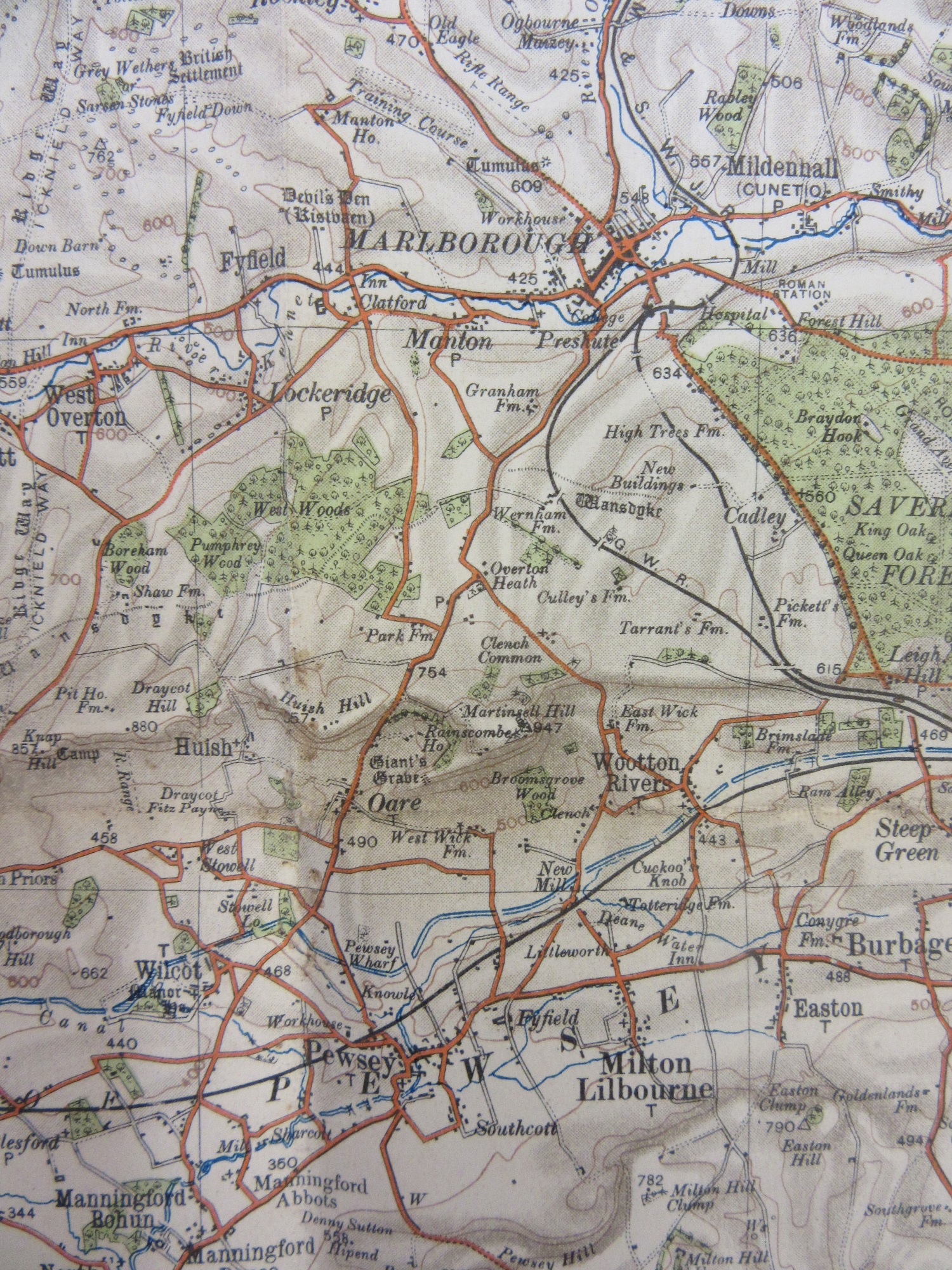 Due to the expense involved driving was both for the rich and a leisure activity (in 1903 the De Dion cost £325, well over two years wages for a skilled tradesman). At the time of the map a speed limit at 20 m.p.h meant any long journeys would have been more practical by train. These maps show how, for a pootle in the country, it really was an open road, just be careful of those hills. 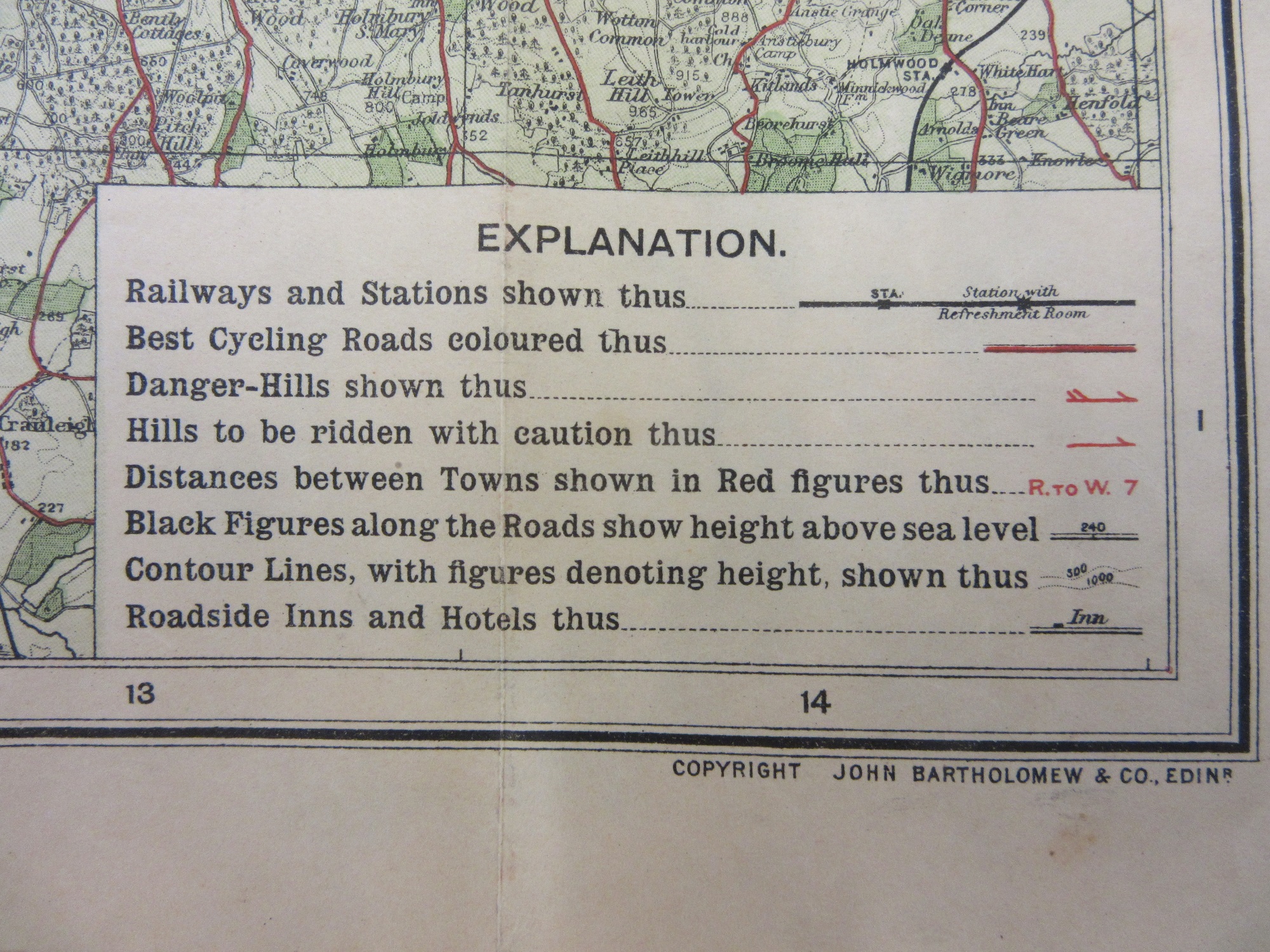