Maps recently purchased a large scale manuscript estate map entitled ‘Hen’s Farm in Bordesley in the Paris of Aston in the County of Warwick belonging to Brazen:nose College Oxford, the Free School of Birmingham and Haverford West … Survey’d by [J. Tomlinson, 1761]‘ which is a very nice thing of pen and ink on tracing cloth. 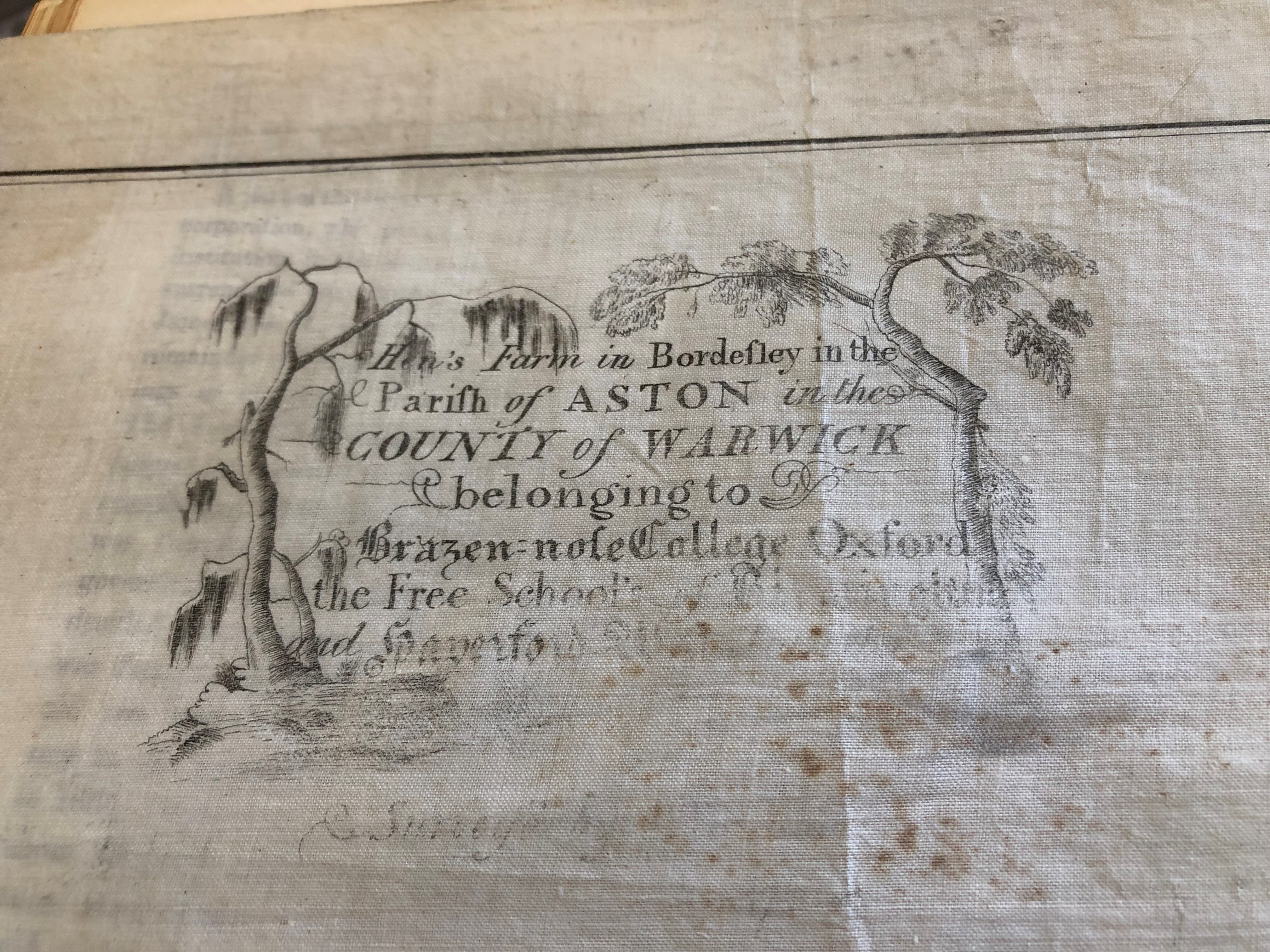 It shows the farm buildings and all the fields associated with it are labelled with areas in acres, roods and perches; individual trees and farm gates are drawn in and the neighbours named. 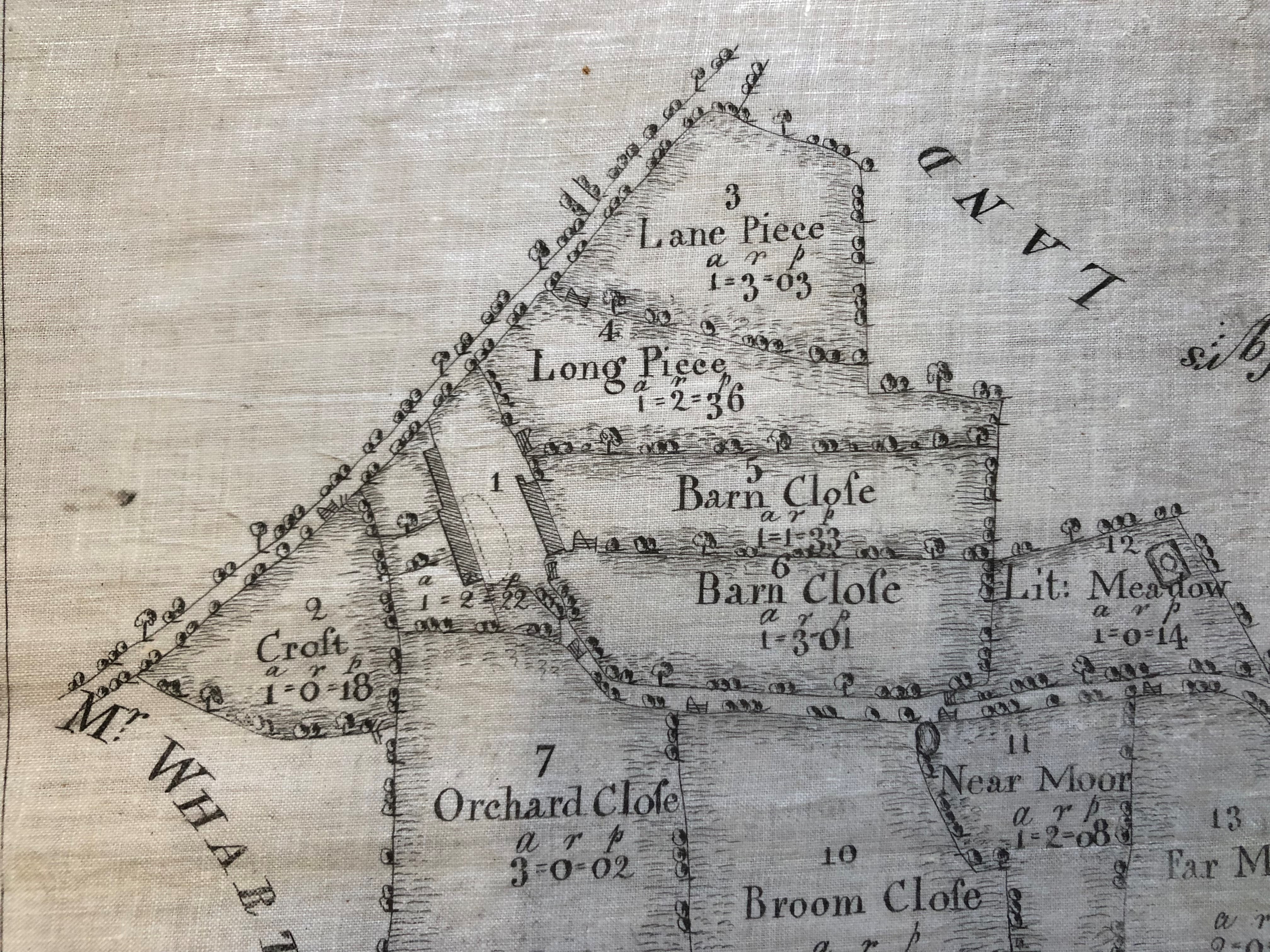 This was all very well until I came to catalogue it and realised that it only had one unnamed road and no north point making locating it on a modern map pretty much impossible.  Checking our holdings of large scale maps of the area, I still could not place it. I really didn’t want to be beaten at such an early stage so I contacted Brasenose College Archives and Warwickshire County Record Office to enquire if they had any records which would help me place this farm.  Unfortunately, neither of them could help me but Warwickshire suggested I contact Birmingham City Council Archives and Collections.

They, too, did not have any records but helpfully sent me a link to their tithe maps, which have been digitised and crucially, georectified.

I selected the Bordesley Manor map of 1758 by JohnTomlinson and was immediately struck by the similarity of style to the Hen’s Farm map.

The scale was smaller, the fields weren’t so finely drawn but it was pretty much the same. All I had to do now was find the farm.  After quite a lot of peering through a magnifying glass and an obscure reference in William Hutton’s The history of Birmingham, it was there! I located the farm from the field names, as the buildings are not actually labelled. By removing the tithe map layer, I could see exactly where it was on a modern map. I can report it sat where now is basically the central reservation of the A45 just south of the Tesla Supercharger which doesn’t have quite the same rural idyll feel but useful to know. 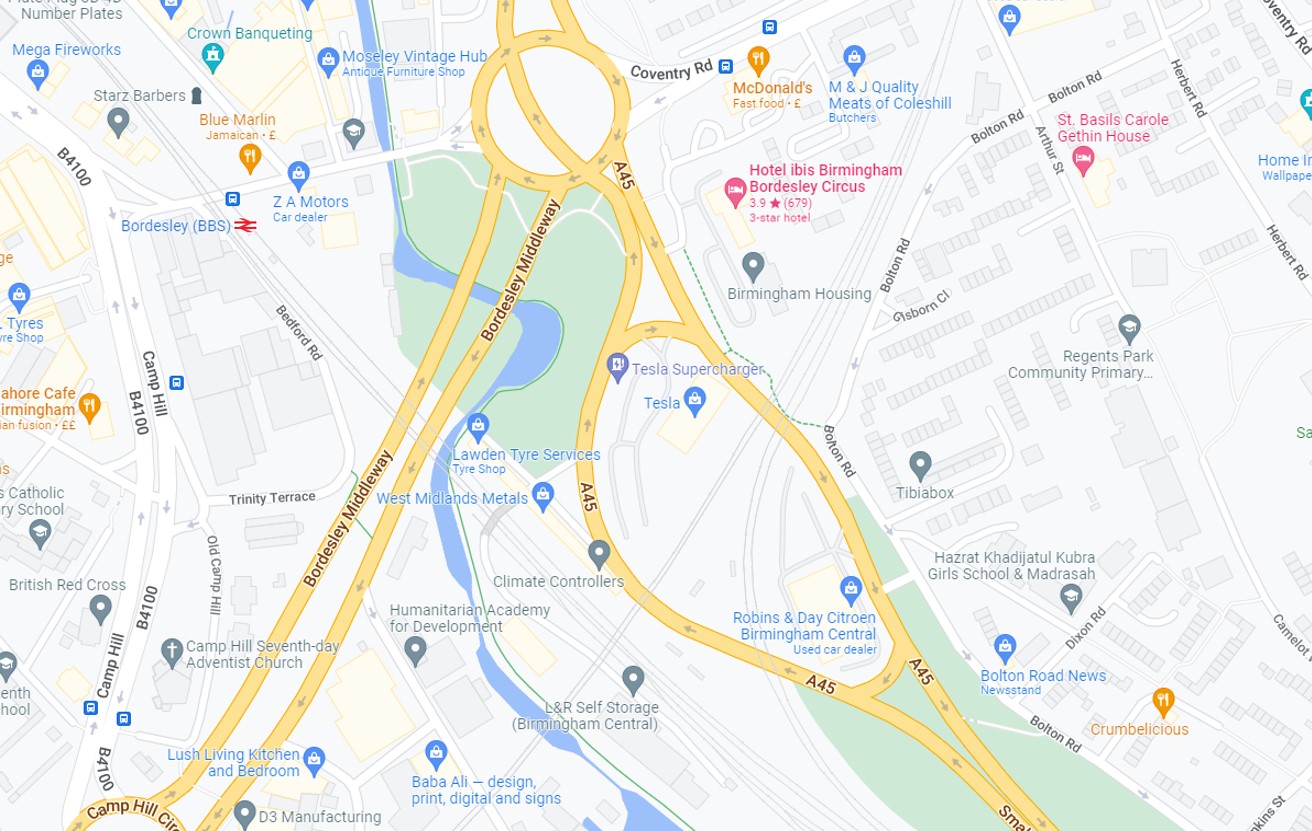 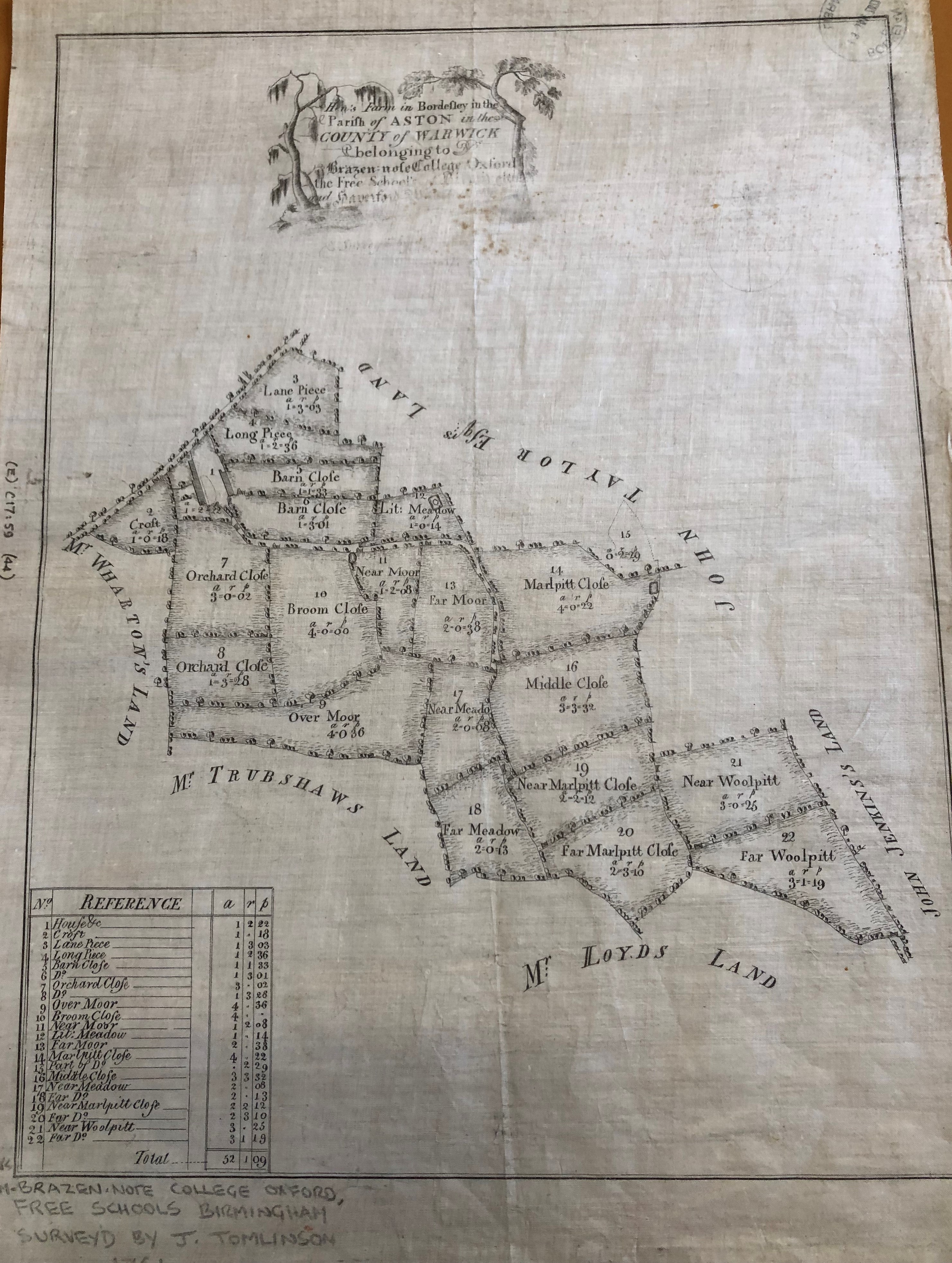 In a collection that has it’s fair share of strange maps (‘Naughty Norman’s London sex map’ anyone?) this has to be one of the strangest. 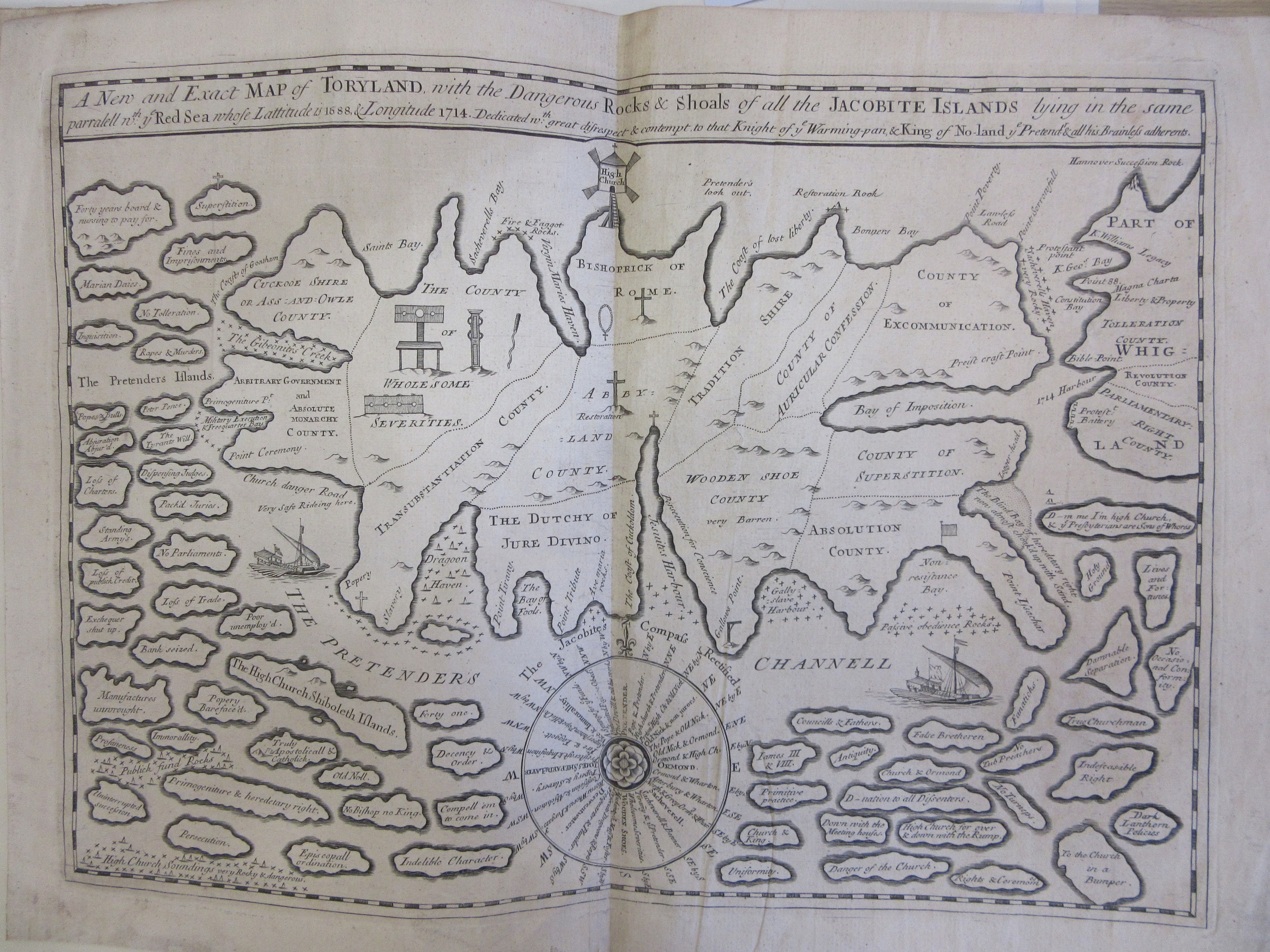 ‘A new & exact map of Toryland, with the dangerous rocks & shoals of all the Jacobite Islands lying in the same parralell with the Red Sea, whose lattitude is 1588 & longitude 1714. Dedicated with great disrespect & contempt to the Knight of ye Warming Pan & King of No-Land ye Pretender & all his Brainless adherents’.

Where to start? The Knight of the Warming Pan was James Francis Edward Stuart, the Old Prentender, the son of the last Catholic King of England, James II. His mother, Mary of Modena was considered past child-bearing age (a stately 29 at the time of the birth) so it was suspected that a baby had been smuggled into the bedchamber in a warming pan, in an attempt to keep a Catholic succession in place. 1588 is the date of the Spanish Armada while in 1714 George Louis, a Lutheran Prince from Hannover in Germany who was the closest relative to the recently deceased Queen Anne became George I. The fact that the crown was now in the hands of a foreign national who didn’t speak English didn’t go down well with James, who would have been King if his father hadn’t been deposed during the ‘Glorious Revolution’ of 1688, restoring Protestant rule with William III, William of Orange as was. 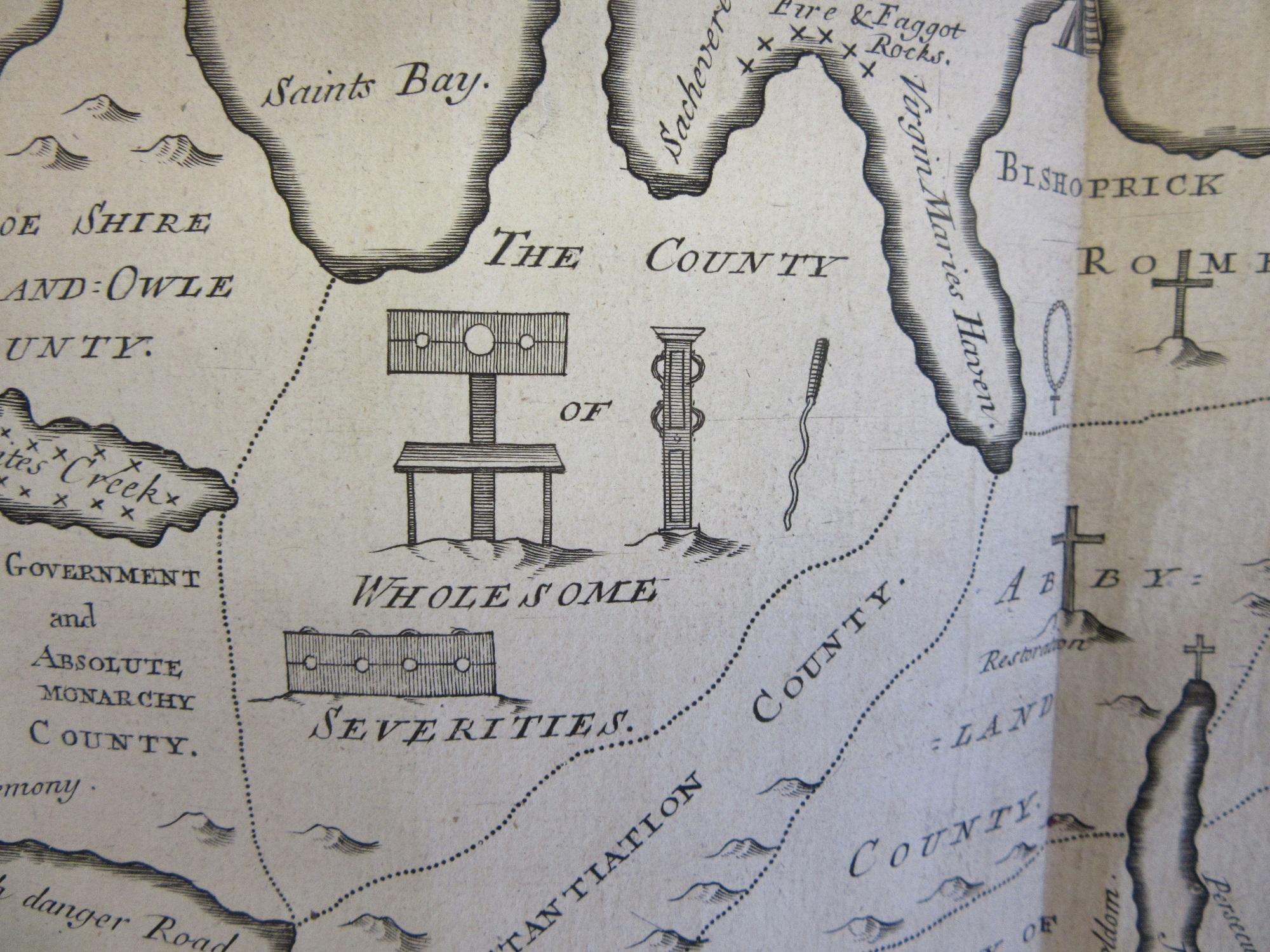 The Jacobite Rebellions were attempts in the Seventeenth and Eighteenth Centuries to restore the House of Stuart to the throne. This map is a cartoon satire against that, the ‘dangerous rocks and shoals’ that surround Toryland are symbolical of the dangers that sailors face when navigating around dangerous shores while Toryland itself is full of warnings about what a Catholic monarchy would mean; ‘Restoration of Abby land’ (as in a return to the Abbeys and Monastery’s in place, and all the supposed corruption and indulgencies associated with them from before the Reformation), the Bishoprick of Rome, arbitrary government and absolute monarchy amongst others. The islands and shoals surrounding are also full of danger; No parliaments, loss of trade and no juries featuring here amongst others, as well as the island of ‘D-m me I’m in high church, & ye Presbyterians are Sons of Whores’.

Nearly off the map is Whig Island, a land of Protestant and English  tradition. Here we find safety in ‘Magna Charta’ land, ‘Parliamentary Right’ and ‘Hannover Succession Rock’.

Like all maps trying to make a serious point this works because it looks like, and uses, standard mapping practise. The compass rose is an example. Traditionally used to show the compass directions in this case the compass points to people prominent in the Jacobite movement. 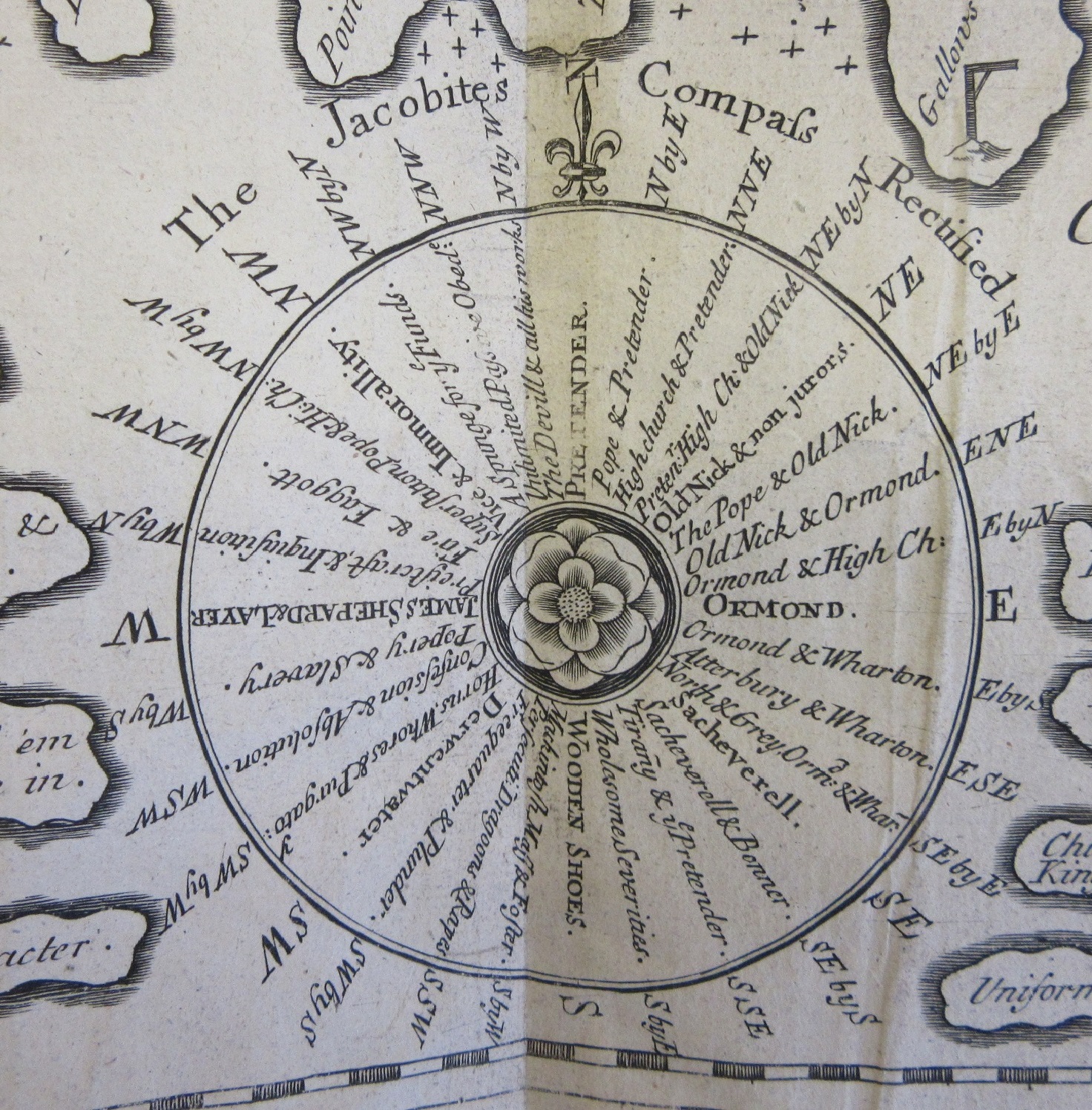 The compass also has a dual meaning. In mapping terms it shows direction, shows the right and wrong way to go, and this can be compared to a moral compass, which has the same purpose, to show the right and wrong way to live your life. Other stock mapping traditions can be seen in the way that rocks and dangers are portrayed, the use of crosses is both common on nautical charts of the day to show rocks but also has religious overtones while the language in the title is similar to that of other maps, ‘Great disrespect and contempt’ mirroring the dedications on many maps to rich and influential people (see here for example)

There are a number of variations of maps making a point by pretending to be a serious cartographic work, a blog about a religious example can be found here, while political versions can be found here. These ‘imaginary maps’ have a long cartographic tradition, and can be seen to have their origins in the maps painted on the walls of Egyptian Tombs to show the departed souls the way to the underworld and continue with Thomas More’s map of Utopia through to the cartoon maps linked above to famous recent examples such as the classic Guardian April Fools from 1977 April fool – San Serriffe: teaching resource of the month from the GNM Archive, April 2012 | The Guardian Foundation | The Guardian