Two contrasting road maps from the early to mid 1700s. One, by ‘Emanuel Bowen, Geographer to his most Sacred Majesty K. George the 2nd’ is straightforward. By including approximate coastlines and county boundaries Bowen is able to map roads in a conventional way, as in they go where you’d imagine them to. 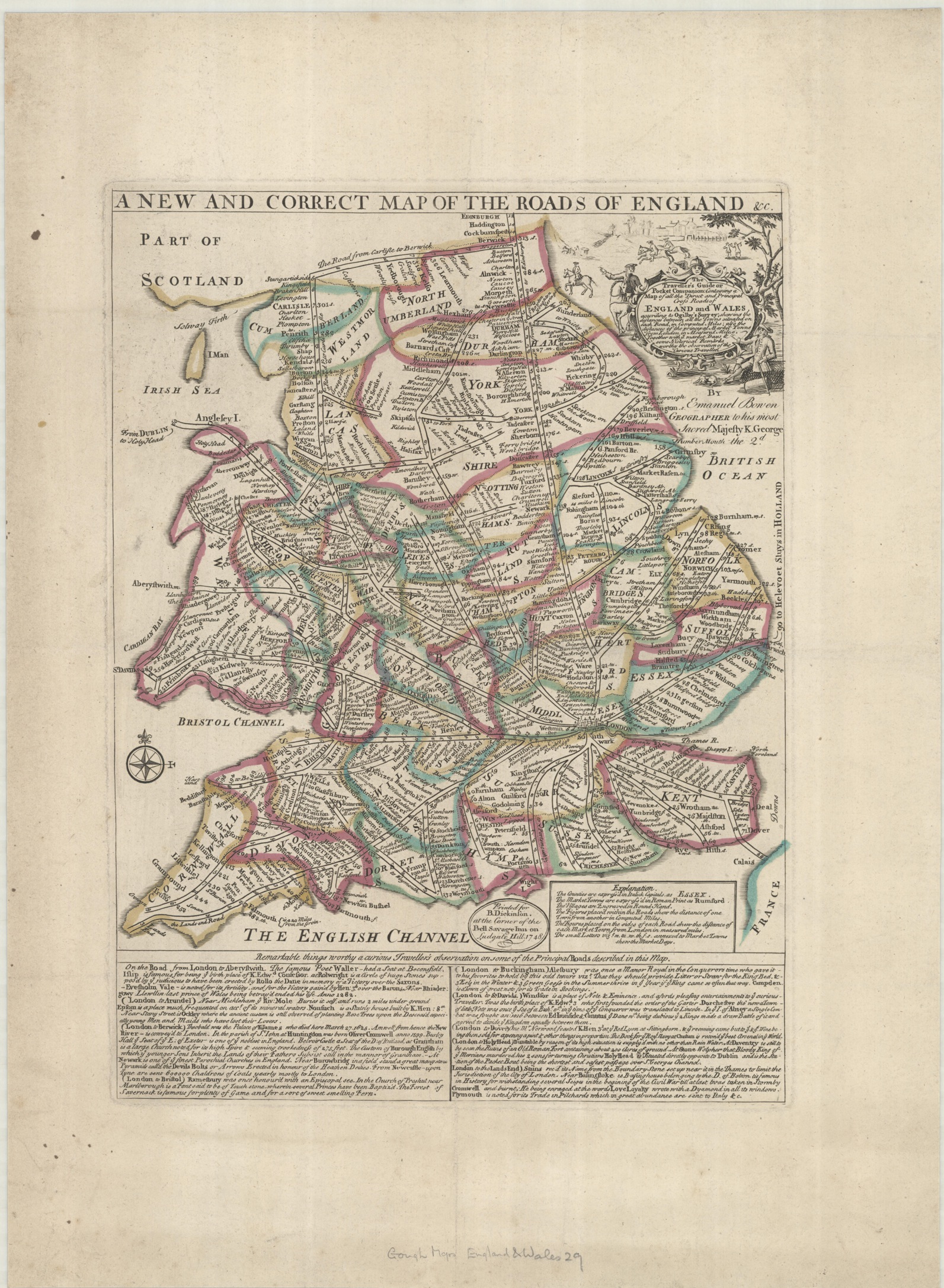 A new and accurate maps of the roads of England, 1748. Gough Maps England and Wales 29

This certainly isn’t the case with the second map. George Wildey, selling prints and maps from the ‘west end of St. Paul’s Churchyard’,  sets out in linear form a guide which ignores the natural curves of the roads shown and includes in order the towns passed through on main and side routes. The map also includes information on market days, distances between towns and if the town or city has a special status (university, post town, bishopric).  With it’s straight lines it could almost be a map of the Roman roads. 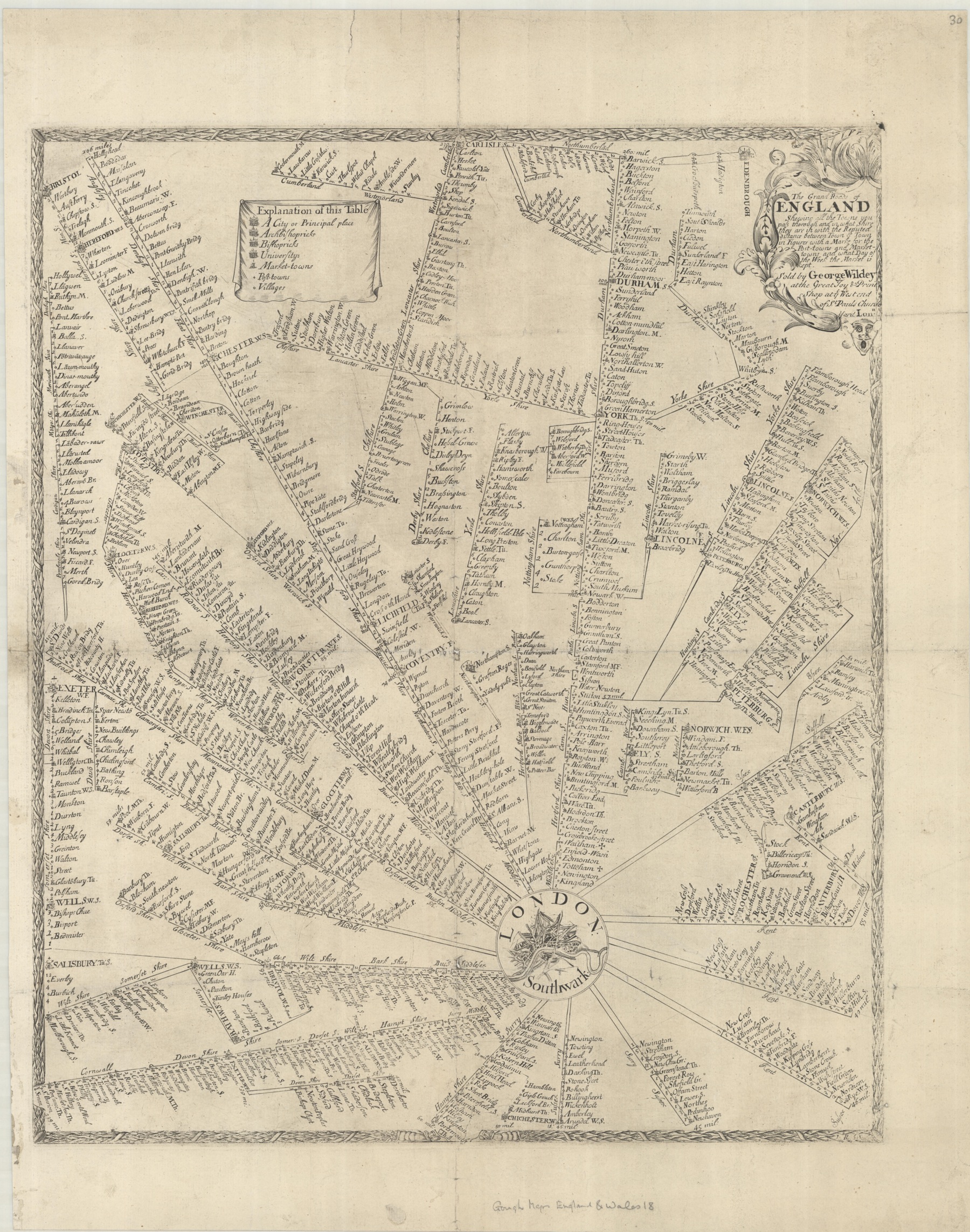 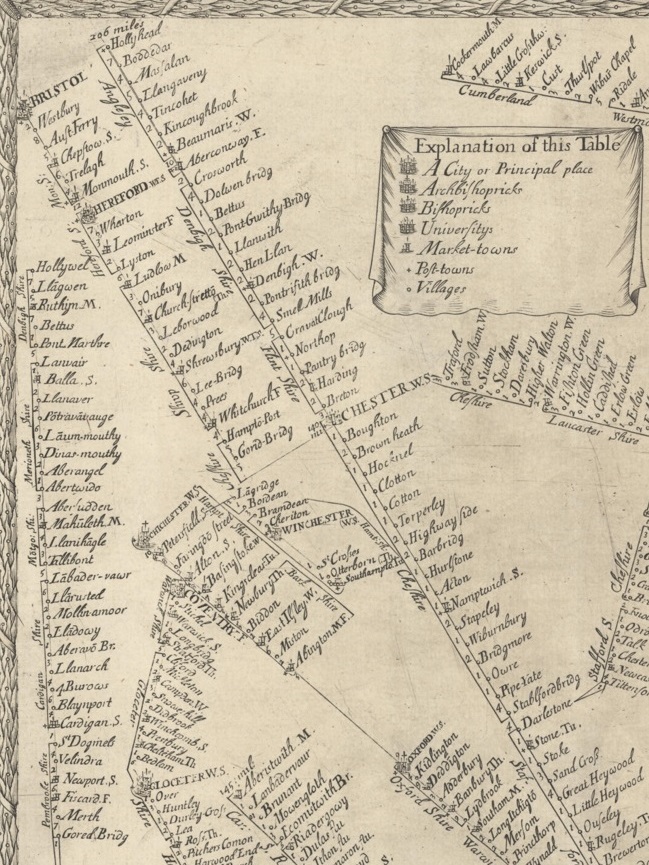 Bowen shows things geographically and with roads crossing over other roads, as they do on the ground, meaning locations aren’t forced to appear out of place. On the Wildey map because of the rigid need to show things in a straight line and to keep things as clear as possible locations, especially in the crowded western side of the map, are forced into strange places. Wildey also doesn’t show distances between places, instead he gives an idea only by the miles between one location and the next. Take Bristol. This busy port appears as expected on a route coming west out of London which when it gets to the city branches out to Exeter and Banbury. Bristol also appears at the top left, at the end of a route that leaves Chester travelling south through Ludlow and Hereford. This Bristol is located on the map between Hollyhead and Hollywell (Holyhead and Holywell) in North Wales. Gloucester as well crops up in a few stranger places, and again it’s when side routes branch out from hub cities. Wildey’s map becomes less a cartographic object and more an itinerary, a list showing to get here you need to first go here, and here, and here.

According to the text in the cartouche Bowen’s map is made ‘according to Ogilby’s survey’. This is the famous  set of maps published in 1675 by John Ogilby. We blogged about his remarkable life, the maps that made him famous and the possible hidden agenda behind them here http://blogs.bodleian.ox.ac.uk/maps/2020/11/12/measuring-distances-a-wheel-or-a-chain/

Bowen’s map does include some cartographic peculiarities. Shipping routes across the Channel to join up with Calais and Helevoet Sluys (now Hellevoetsluis, South Holland) show as if they are roads across the sea, in the case of Calais an early taster for a later tunnel under the water. 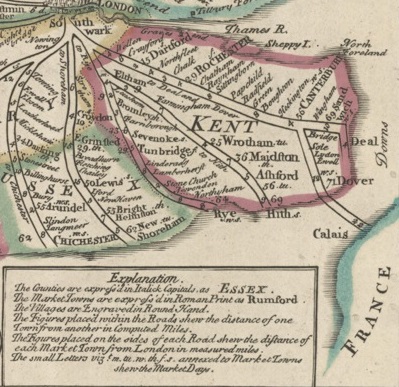 Bowen also includes notes on features to look out for when travelling, ‘Remarkable things worthy a curious traveller’s observations on some of the principal roads described in this map’. For instance, ‘Near Basingstoke is Basing House belonging to the D. of Bolton. Tis famous in history for withstanding several sieges in the beginning of the Civil War till at last was taken in storm by Cromwell and burnt. His being enraged at the words LOVE LOYALTY wrote with a dyamond in all its windows’.

Wildey’s map appears confusing and unconventional but the theory behind it is good and has survived today in maps which show information such as travel routes where the need to give clear information overrides any need for geographical accuracy. The most famous example being also one of the most used maps to have been published, the London Underground map.