At twenty minutes to two on the afternoon of the 8th September 1785 Mr Thomas Baldwin, to the ‘tears of delight and apprehension, the misgivings of humanity, and other sensations of surprize’ of the inhabitants of Chester took flight in a hot air balloon. Ascending to a height of four miles over Chester Baldwin was able to look down on the earth, a true birds-eye view. He wrote of his adventures in a book published the following year, Airopaidia : or aerial recreation, describing the voyage as well as giving a detailed account of the preparation involved in the flight (for instance a canon was fired at 7 am to let people know that the balloon was being inflated), the equipment taken onboard (as well as ballast brandy and feathers to throw out at various times to check wind speed and direction), and, rather worryingly, what to do if you start to descend too quickly. Baldwin also included some lovely original maps showing the views from above the clouds. 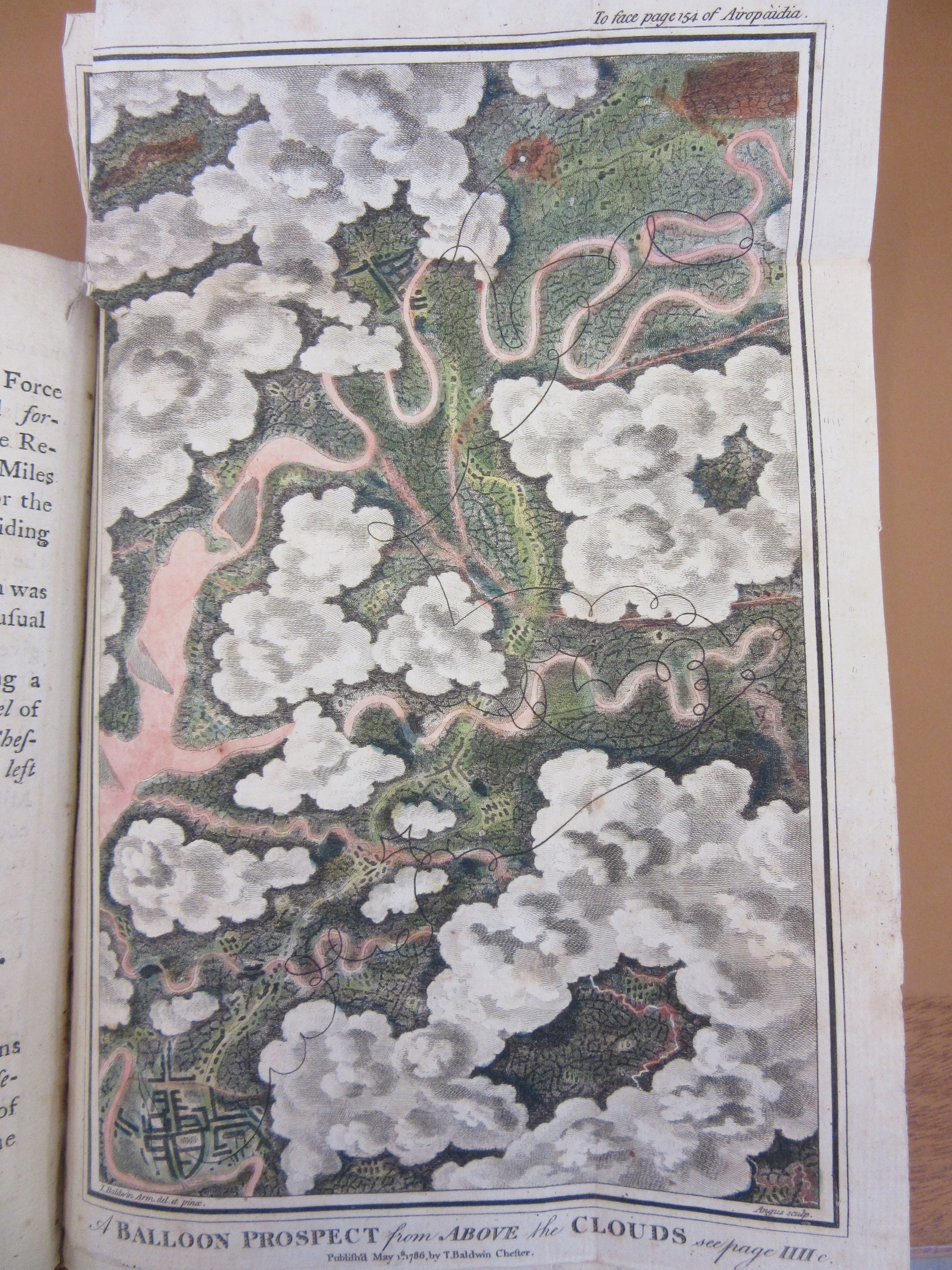 This has to be one of the earliest maps to include clouds over the land. The first manned balloon flight was only two years earlier in France, with the first in Britain almost exactly a year before Baldwin’s ascent so Baldwin was one of the earliest to see the earth partly obscured in this way. In the bottom left corner is Chester (‘the gay scene was a fairy-land, with Chester Lilliput‘) with the River Mersey snaking along from right to left. Imposed over everything is a twisting black line showing the route the balloon took over the Cheshire countryside. The maps are beautifully drawn, fully deserving the praise given them in the book, ‘Descriptions of the aerial scenes are illustrated with engravings, by the best masters; two of which are coloured‘. The engraver is named as Angus, a name not listed in map engravers and map-makers dictionaries held at the Bodleian but is possibly William Angus (1752-1821), who specialized in plates for books and prints working out of Islington.

On the next page the book does something rather clever. There is another map, this time a topographic map of the same area naming features not hidden by the cloud-cover but with the same route shown. Both the coloured view and the black and white map are folded, but the black and white map is on an extended piece of paper, meaning that you can have both open at the same time and compare the same area side-by-side, like this 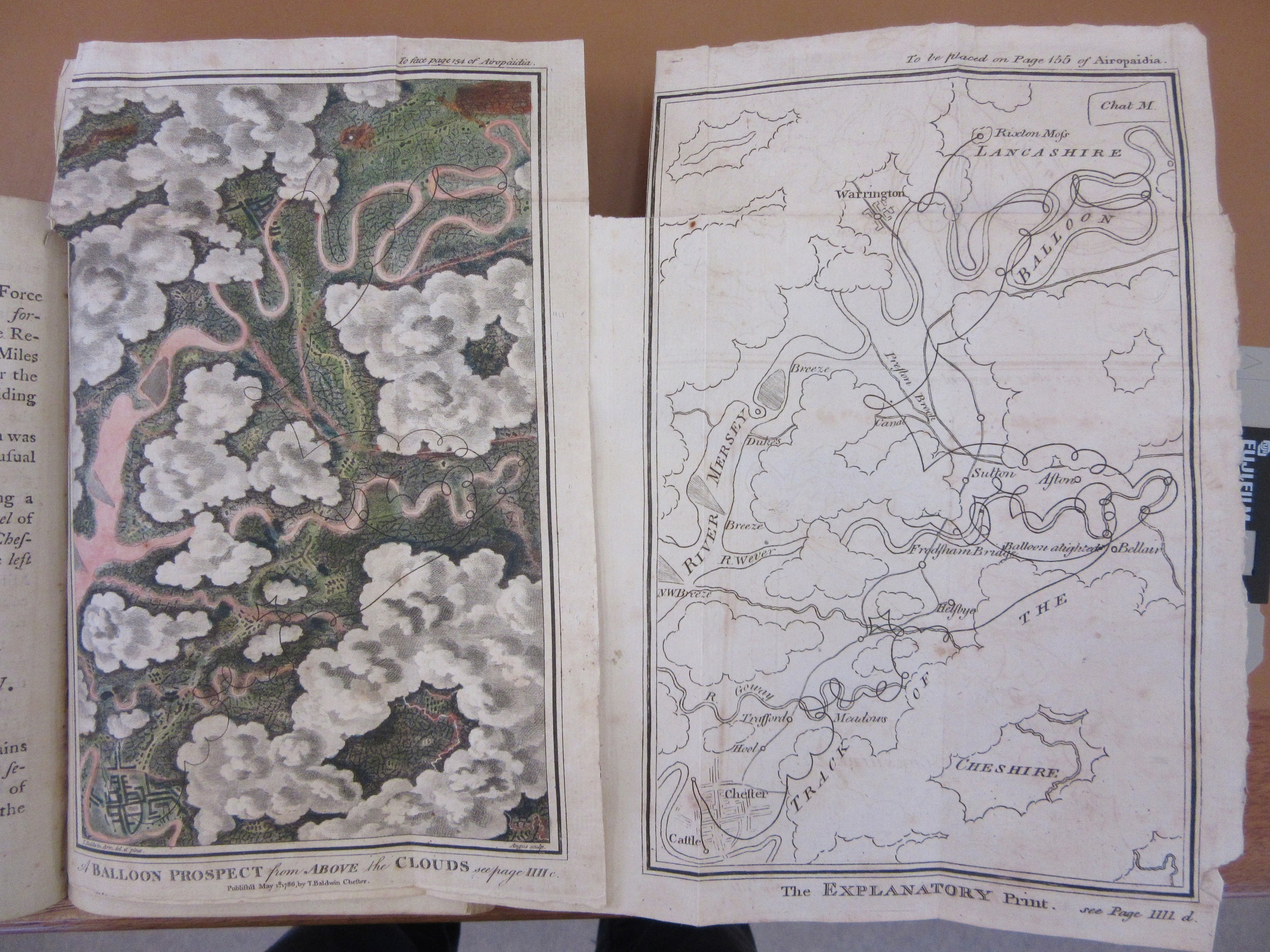 The obvious advantages to cartography from balloon flights came just at the wrong time. Triangulation surveying had recently been introduced to Britain from France, and despite the efforts involved in first of all measuring out an accurate base-line then surveying across the country from this point the results produced maps of sufficient accuracy to make this the favoured method of map-making. Balloons though wouldn’t be forgotten, and were used to survey enemy positions in the early days of the First World War. Where the balloon did give an advantage was in the drawing of panoramas. The ability to draw an oblique view of a town or city was established well before balloon flights (see here) but these maps were drawn from low down, meaning that the buildings nearest the cartographer were given more prominence. The extra height gained from the balloon meant that a greater area could be shown as the angle of the observation was greater, and the area observed was greater. This can be seen to great effect in this wonderful ‘Balloon map of London’ 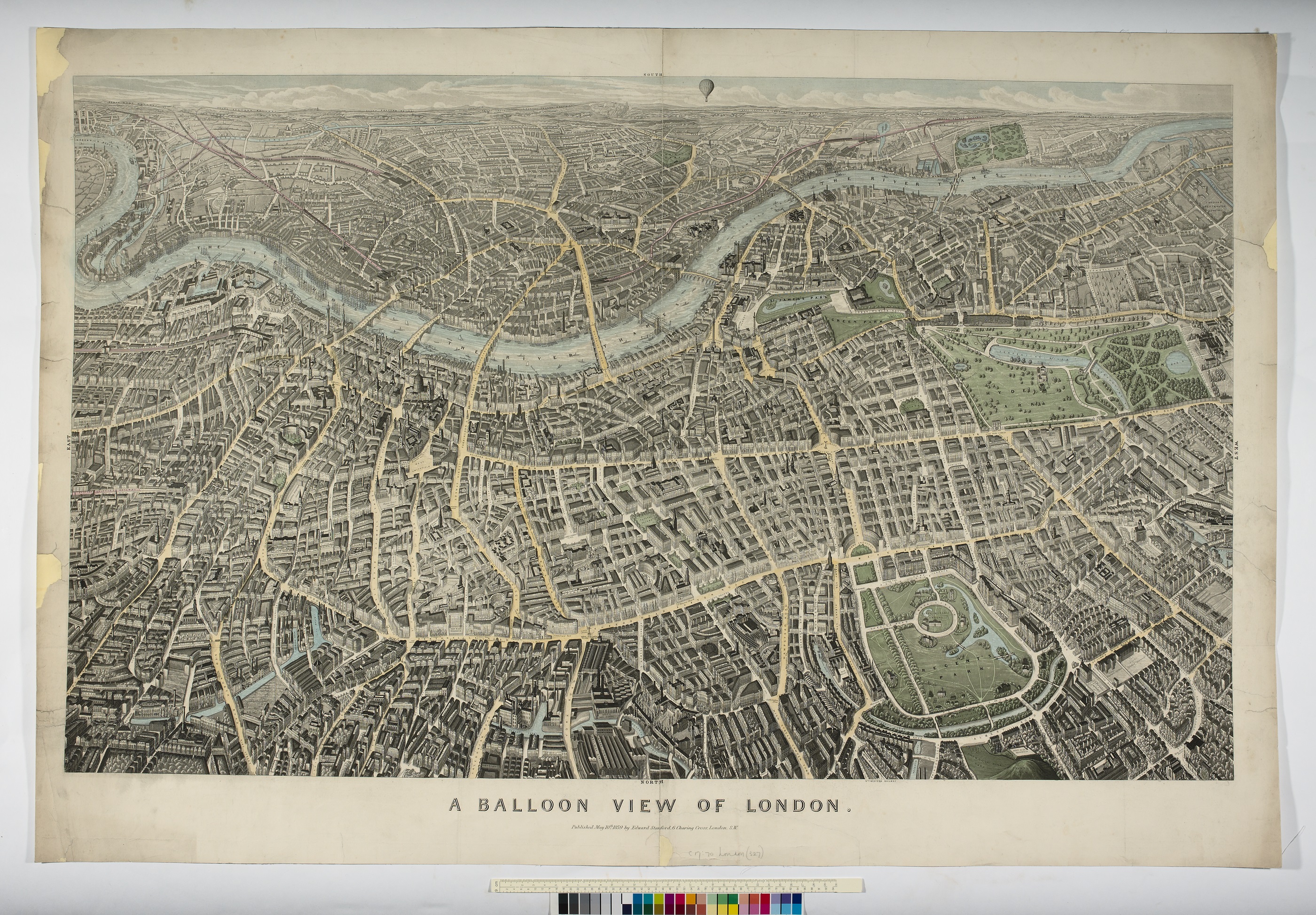 Despite a balloon appearing at the top of the map the view taken is from the north, with south of the river disappearing into the distance, suggesting this is the viewpoint from another balloon. The balloon featured is a nice bit of decoration in keeping with the theme of the map.

We’ve blogged about clouds on maps before, in this case their use in wartime deception here  and balloons featured in an earlier blog here

Our blogs are usually written after either coming across a map that sparks our interest or of reading of one in a book or journal. In this case the latter, Baldwin’s flight and maps are mentioned in Rachel Hewitt’s excellent biography of the Ordnance Survey, ‘Map of a Nation’.