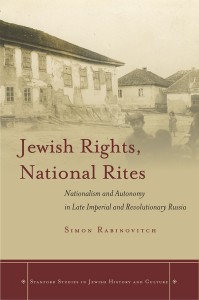 Co-authored by our Professor of Jewish Studies, Martin Goodman, this latest publication from the Littman Library traces the concept of toleration within the Jewish faith over the past 2000 years. This book does not present a warm and sentimental form of Tolerance and harmony, but is a frank and honest portrayal of toleration and at times tensions within the Jewish community. This book acknowledges the diversity within Judaism and explores the ways in which these differences have been negotiated, including Josephus’ representation of the Sadducees and Pharisees. Goodman writes that Josephus avoids going into great detail about the relationship between differing Jewish Philosophies, and suggests that this was an act of diplomacy. Goodman concludes:

The coexistence of such Jews in the Jerusalem Temple is evidence not of co-operation but of a sort of grumbling mutual tolerance which was to recur at later stages in the history of Judaism. (p. 44)

Kaiser in the final chapter examines the increasing use of tripartite seating patterns in today’s Jewish community, which allow multiple Jewish denominations to worship in accordance with their own beliefs simultaneously. This chapter explores the effect of this changing notion of toleration, namely that religious practise is more personalised and therefore more fragmented. Furthermore that tolerance becomes voluntary rather than enforced which can polarise some religious groups.

We constantly receive new titles in English and Hebrew; these are available from the ‘New acquisitions’ bookcase at the entrance to the reading room and can be borrowed. The books are frequently rotated so remember to check the shelves regularly. Here are some other new books in our English collection: