Skip to content Skip to main menu
Home › Library Life › A piece of Bodleian History: Clues from the Stacks

In my first blog, I mentioned the twice-daily deliveries of books from our Book Storage Facility in Swindon to the Old Bodleian site- as well as other Bodleian Libraries.  Something exciting arrived in a recent delivery:

The Yellow Fairy Book (ed. Andrew Lang) was called up from the closed stacks. This was not interesting in itself (although it is a first edition and has a nice cover) until we opened up the book and saw that the last borrower had left their slip in there.

That’s right- the J.R.R. Tolkien used this very book! The book mustn’t have been touched for several decades and so the slip has remained in place.

I contacted the Bodleian’s Tolkien Archivist, Catherine McIlwaine, who was able to confirm this. She explained that Tolkien looked at the book ahead of giving his famous Andrew Lang lecture at the University of St Andrews on 8th March 1939. The lecture was published as an essay entitled ‘On Fairy Tales’ in Essays Presented to Charles Williams, alongside contributions by contemporary academics such as C. S. Lewis and Dorothy L Sayers who also went on to have literary success.

Library records show that Tolkien consulted the book, among others, on the 27th February 1939. He was obviously working hard, preparing for the lecture, just ten days prior to delivering it (this makes me feel less guilty about all those essays hastily put together days before they were due!).

I went to Weston Library, which houses the University’s Special Collections, to look at the library records and see what else Tolkien looked at on the day. At the time Tolkien visited the library, the basement space underneath the Radcliffe Camera was a closed stack where only staff were allowed. Librarians would fetch any books stored there for readers to consult in the reading rooms. (The area is now called the Gladstone Link and is open to readers to use as a study space and to find books on the shelves themselves.) 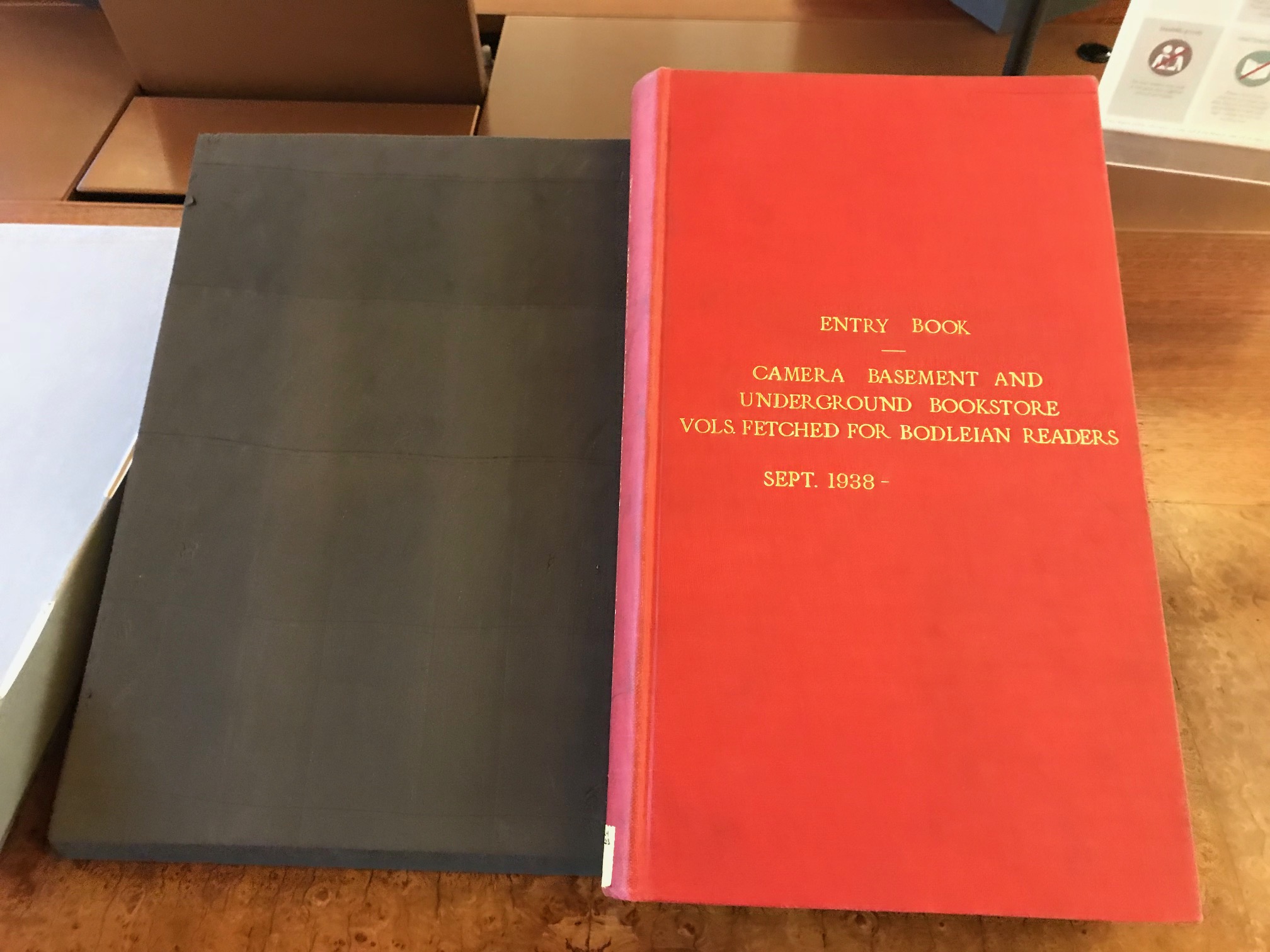 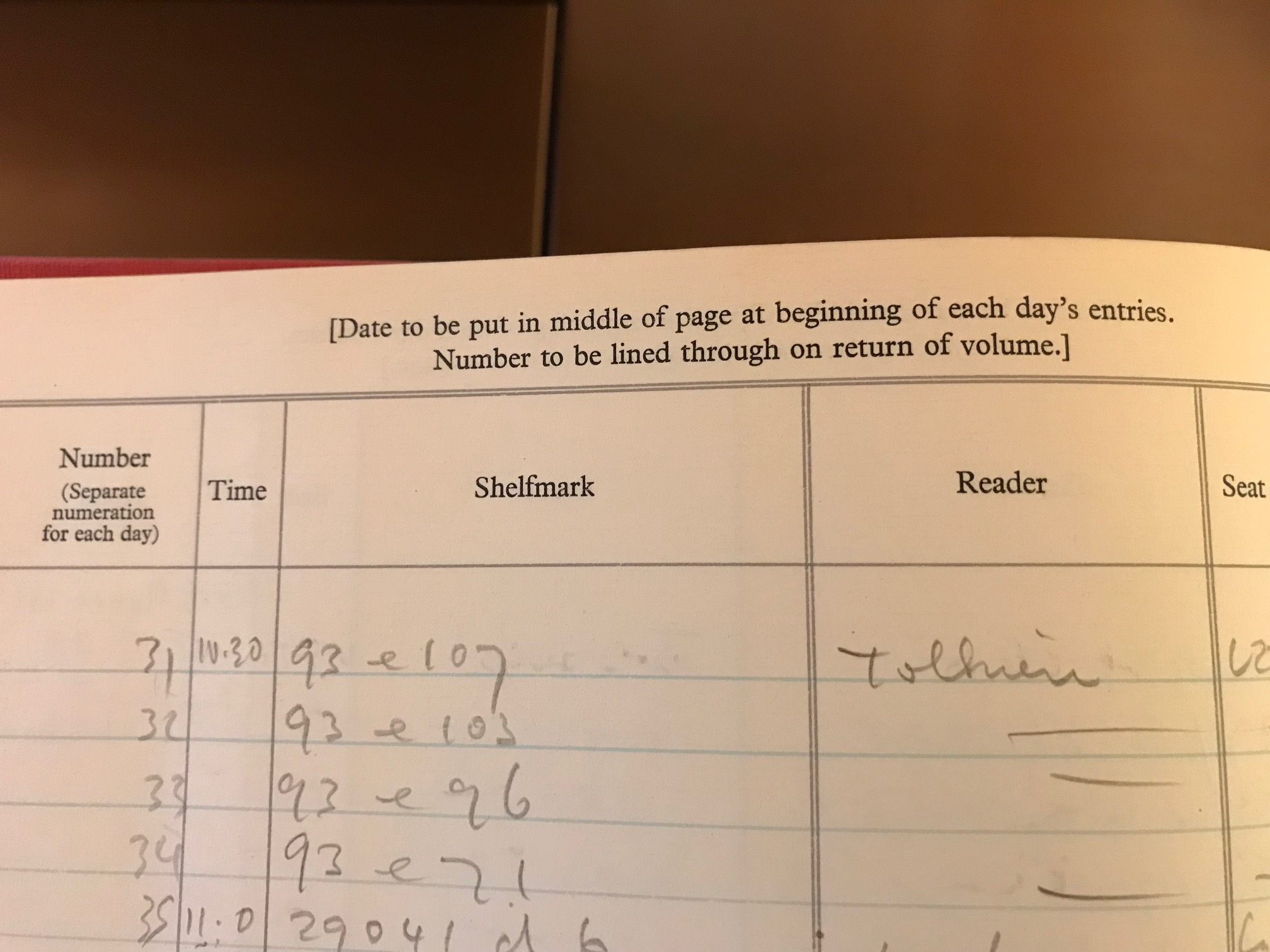 MS. Library Records b. 618  ‘Camera Basement and Underground Bookstore Volumes fetched for Bodleian Readers’ & the inside of the book where you can see Tolkien’s name was recorded. The shelf mark ‘93 e.71’ is ‘The Yellow Fairy Book’.

The librarians recorded number of items requested each day, the time each book was requested, the shelf mark of the book, name of the reader and the seat number where they were sitting. Books were then fetched and delivered to the desk. I checked on our catalogue to see what items the shelf marks referred to.

Later on, at 11:30am, he requested:
Fairy Gold, a book of old English Fairy Tales chosen by Ernest Rhys (1907)
The Secret Commonwealth of Elves, Fauns and Fairies (compiled in 1893) by Robert Kirk
Essays in Little by A. Lang (1891)
Perrault’s Popular Tales, ed. by A. Lang (1888)
The Magic Ring, and other stories from the Yellow and Crimson Fairy Books, ed. by A. Lang (1906)
English Fairy and other folk tales, selected and edited by Edwin Sidney Hartland (1893)

As well as for use in his upcoming lecture, the stories in these books would no doubt have inspired Tolkien with his own fiction. The slip we found was left in the book at the beginning of The Dragon of the North a story about a courageous youth who defeats a man-eating dragon. He manages this feat with a magic ring, stolen from a witch maiden. Amongst many of its powers, if placed on the third finger of the left hand, it turns the wearer invisible. In the end, the ring is too powerful, and the youth learns that ‘ill-gotten gains never prosper’ when the witch retrieves the ring and punishes him for his deception. There is a eucatastrophe- the term Tolkien coined to describe happy endings in Fairy Tales- as the youth is rescued and made king.

It looks like Tolkien must have returned to consult The Yellow Fairy Book at least once more, as the slip suggests he sat in seat 23 of the Upper Reading Room- whereas the records from the 27th February state seat 22. He obviously liked that particular area of the reading room (I must say, it has a nice view of the Radcliffe Camera through the window!) 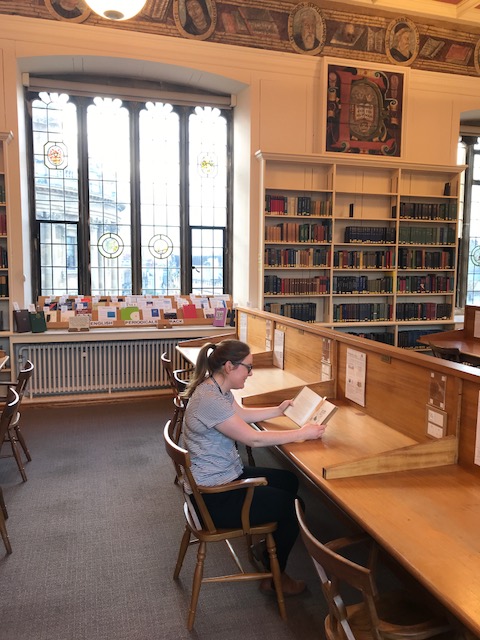 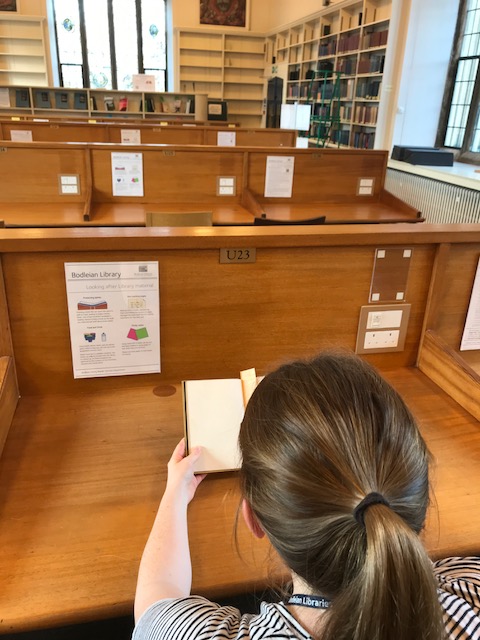 Here’s me, sitting in seat 23 in the Upper Reading Room, pretending to be Tolkien!

It was pretty thrilling to open up the book and find the Tolkien slip; and interesting to trace his steps and see what other books he used, during the period when he would have been writing Lord of the Rings. It makes him feel more real, somehow, to know that he used the library just like us!
It also makes me excited for the upcoming exhibition, curated by Catherine McIlwaine, entitled Tolkien: Beyond Middle Earth which will open at the Weston Library in June 2018.

8 comments on “A piece of Bodleian History: Clues from the Stacks”