As promised in my first blog, here is an introduction to the ongoing reclassification project here at the English Faculty Library!

So, a little historical context: in 1914, when Oxford established a dedicated library for the study of English, the first librarian (Percy Simpson, whose adventures you can read about here) created an in-house classification system. Books were categorised by time period, and each author was given a unique number within those sections. For example, books by or about Jane Austen began ‘M13’ – ‘M’ indicates 1790-1830, and ’13’ was the number allotted to Austen. The system had two main strengths: shelfmarks were short and easy to remember, and the time periods were conveniently divided so that materials for a particular paper would be kept close together, making it easy for readers to browse related material. 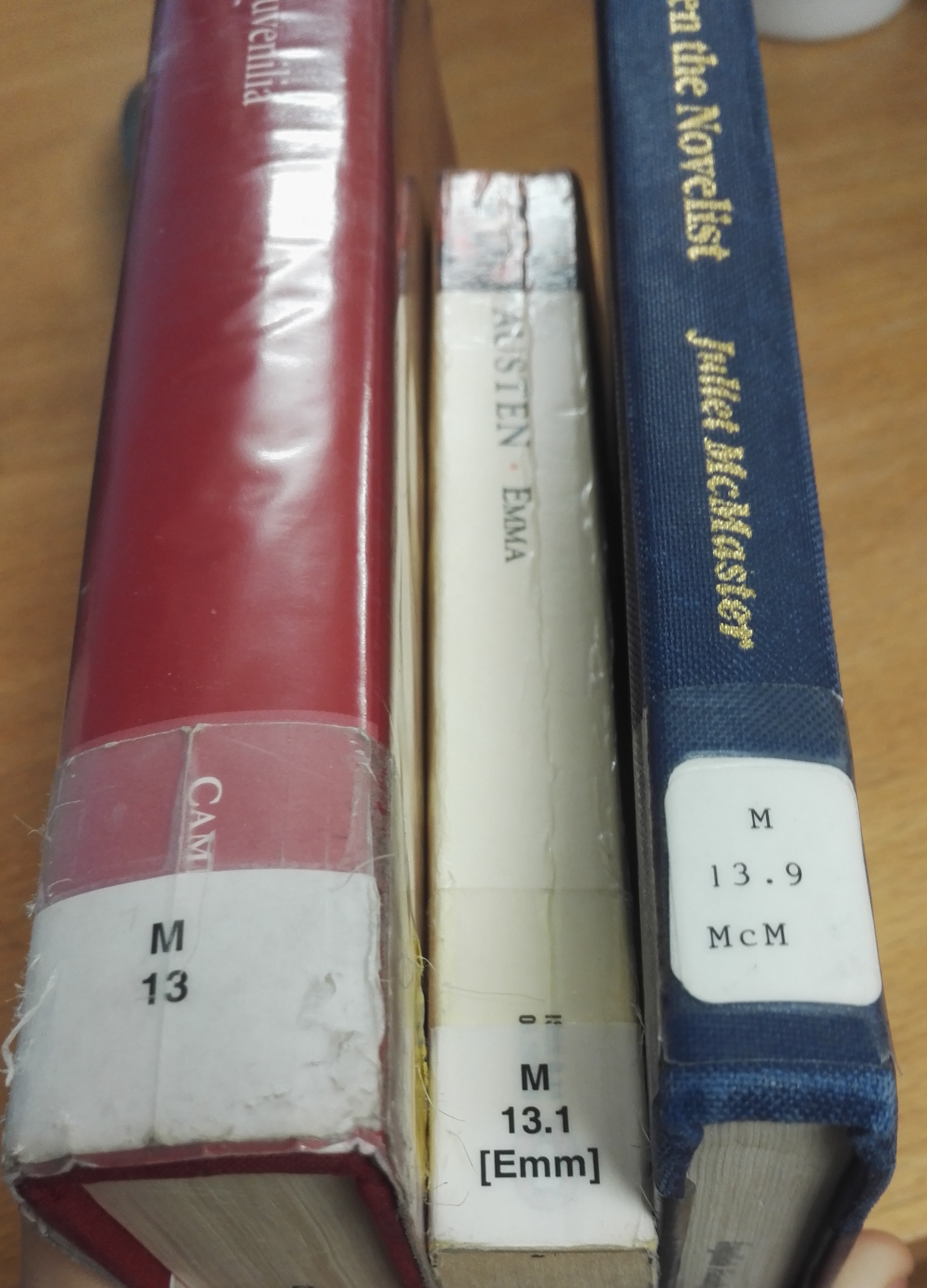 This system lasted for almost a century, surviving two major location moves for the library – from the current site of the Weston Library on Broad Street, to the loft of Examination Schools, and then to the current purpose-built site in the St. Cross building. However, several problems emerged over time:

As a result of these factors, it was decided ten years ago that the English Faculty Library would switch to Library of Congress Classification (LCC), which is an internationally recognised system developed by the Library of Congress, in Washington, D.C. 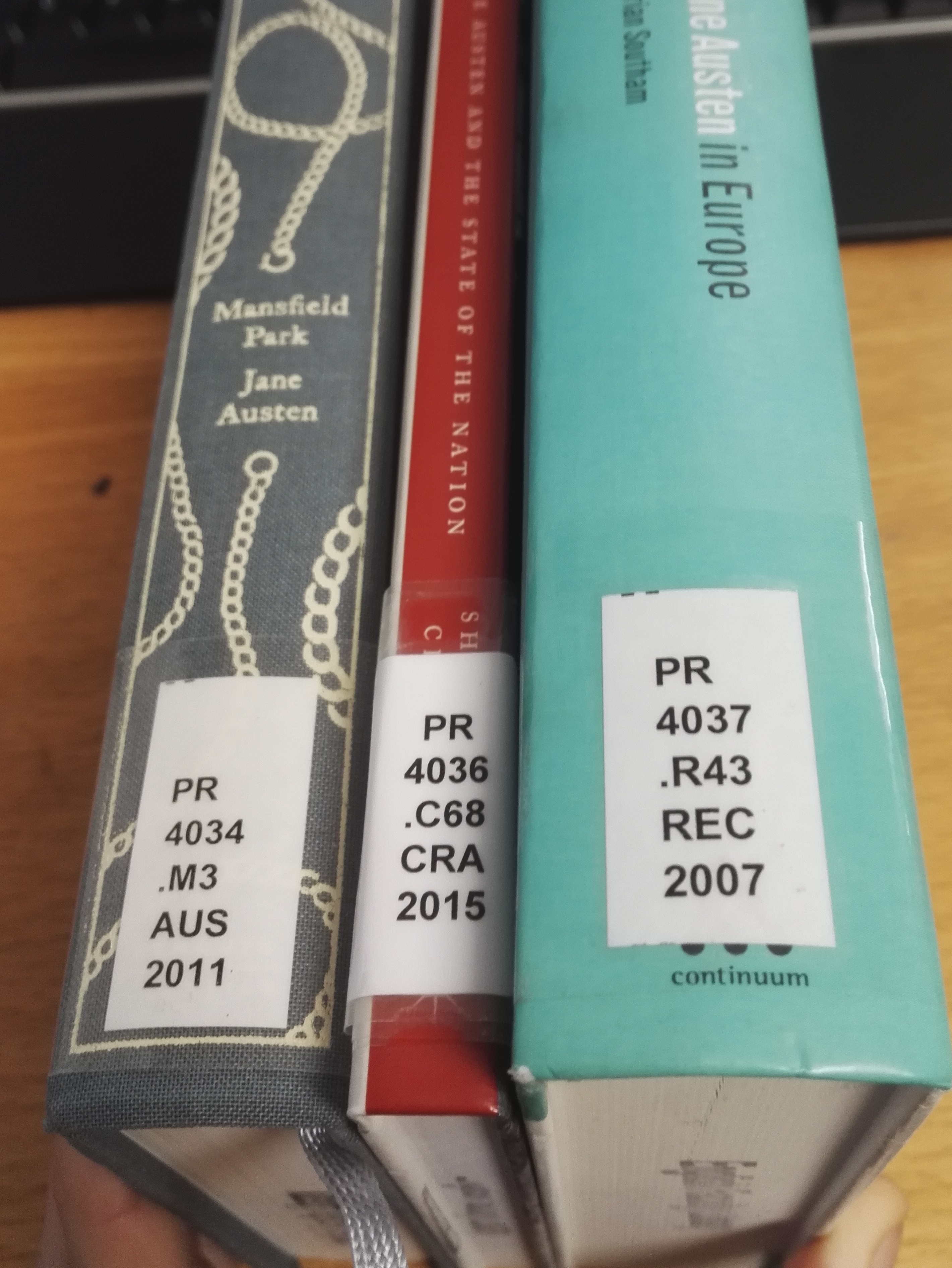 Since then, every new book we have acquired has been given an LCC shelfmark, and there is a long-term project to reclassify our existing stock. This involves printing out new labels for each book and editing each item’s electronic bibliographic record – as we go through, we assess each item, repair or replace damaged books, and fill in any gaps in our collection. Over the summer, my colleagues reclassified over 2000 books from the ‘S’ section, which contained post-colonial literature. Since then, we have moved on to ‘R’ (American literature), and significant progress is being made to process all 6000 items.

When we began reclassifying, we limited ourselves to vacations, as shifting the sequences requires a lot of (potentially-disruptive) book moves. Plus, there was a major building project, completed in 2016, which meant that reclassification had to be put on hold for a couple of years. However, now we are back up and running, we’ve decided to continue some reclassification throughout term and so far have had no complaints from readers.

Despite this, there is still a long way to go! As I write, just over half of our books still need to be reclassified, so it will be a few years until our entire collection is LCC. Helping (a bit) with the project has been instructive in the kind of varied behind-the-scenes work involved in collection management. It has been interesting to see the ways in which a project like this presents an opportunity to maintain and develop our collections, creating the best possible resource for our patrons.

Hi! I’m Dom, and I’m the Graduate Trainee based at the English Faculty Library. I did my undergraduate degree in English here at Oxford, and then studied for a Masters at Bristol, focusing mainly on British literature from the 1920s and 30s. I am in the slightly unusual position of having used the library I work in as a student, though when I arrived for my interview the front door was no longer where it used to be, so things do change!

The EFL is located just outside the centre of town, based in the St Cross building, which we share with the English Faculty, Law Faculty and Bodleian Law Library. The building is a Grade II* listed example of 1960s brutalist architecture, so a little bit different in style from the Radcliffe Camera or Taylorian Institute, though similarly confusing to navigate.

We have significant teaching and research collections for English Literature and Language, in addition to the imaginatively-named Rare Book Room (which is fun to poke around), and materials for the postgraduate degrees in Film Aesthetics and Women’s Studies. We are also a reading room for the wider Bodleian Libraries, which means that our patrons can request books to be delivered here from the Book Storage Facility in Swindon. The EFL is a busy library with a wide variety of things going on, which makes for an interesting place to learn about librarianship!

8.45-10am: arrive at the EFL; turn on the printers upstairs and check that they have enough paper and toner; make up the cash float for the till; process expired hold items and prepare them to be sent back to storage.

10am-11.30am: process the new delivery and take them out to the issue desk; perform a head count of readers; make a cup of coffee; shelve any journals which have been used and update the spreadsheet.

11.30-1pm: update twitter; check the enquiries inbox; go on the issue desk for an hour.

1-2pm: lunch break (the famous ‘Missing Bean’ coffee shop in our building is reopening today, which we’re all very excited about).

2-3.30pm: process the pile of new journals and books; look through our records to see if any journals have failed to arrive on time; update our New Books Display; escort a couple of readers to our Old Norse room.

3.30-5pm: fetch something for a reader from the Rare Book Room; work on a display for the library; go on the issue desk for another hour; help close up and shoo lingering readers; home.

Apart from vastly understating how many biscuits are consumed in a working day, this is a fairly representative picture of what I do. So far I have been here for a month, which has gone extremely quickly. It has been reasonably quiet as most of our students have been away from Oxford, giving us time to make progress on the ongoing reclassification project (which I will do a post about in the future, get hyped). Fingers crossed it doesn’t get too hectic when they all return their vacation loans at once! Luckily my colleagues are on hand to help out (also when I get confused about our concurrent classification systems). Plus they’re a lot of fun to work with!