As part of the traineeship, I work one late shift each Friday, which makes for a welcome change of pace. Once the 9 to 5 flurry of circulation activity subsides, a palpable calm fills the library as readers settle down to an evening of study. The shift in tempo provides a much needed opportunity to catch up with emails, book processing and other ongoing projects. It also gives me the chance to reflect on some of the things that make this experience so memorable, primarily working in the Radcliffe Camera.

Home to the History Faculty Library, this building is a regular feature of lists and literature documenting noteworthy landmarks throughout the UK. Its circular design, with baroque allusions to classical architecture, make it a feast for the eyes. Perhaps unsurprisingly, images of ‘The Camera’ pervade the city’s visual culture and manifest in a plethora of interesting ways. A staple of postcard vendors, it can be seen spray-painted to a building on the Cowley Road and is the subject of pictures in numerous shops and restaurants.  Its likeness has been reimagined in the form of key chains, book ends and ornaments in the Bodleian Shop as well.

The Camera’s role as a reading room of the Old Bodleian Library since 1860 has also brought it international recognition, and this cultural icon continues to attract large numbers of students, academics and tourists from around the world today. This trend reflects the increasing popularity of the Bodleian Libraries as a whole. Figures from the 2016/17 academic year reveal that specialists and staff across the organisation responded to roughly 7,500 queries a week, and sustained public interest has meant that the Libraries are among the UK’s top 50 most visited attractions in 2018. This got me thinking of how such an organisation meets the expectations of a complex and increasingly large demographic; the task of reconciling the contradictions between tourist attraction and academic library must be a tricky one!

Through the traineeship, I have been fortunate enough to learn about some of the ways this challenge is being addressed. During a behind the scenes tour of the Weston Library, Christopher Fletcher, Keeper of Special Collections, shed light on how the building’s clever use of space helps to serve a host of different visitors. The open plan design of the atrium in Blackwell Hall means that the cafe, exhibition rooms, lecture theatre, temporary displays and information desk are visible as one seamless panorama, whilst a suspended glass-panelled gallery puts the inner-workings of the library on display overhead. It’s this architectural ingenuity that helps evoke a welcoming sense of inclusivity.

The Bodleian’s decision to accommodate for heightened levels of public interest is evident throughout the central site. In addition to hosting open lectures and workshops, The Libraries also offer a sneak-peak of the reading rooms, some of which featured in the Harry Potter films. Each week, volunteer guides perform the mini miracle of leading immersive tours through this famed network of silent study spaces, with minimal disruption to readers. Nearing the end of Michaelmas term, I am still struck by the novelty of a trail of beguilled visitors passing through the library each Wednesday to gaze at the Camera’s domed ceiling.

Though I’ve not been here long, it seems to me that a flexible, creative and pragmatic approach to public engagement has meant that there really is something for everyone at the UK’s largest library system. It is enlightening to learn how such a feat is achieved.

Hello! I’m Jenna, and I will be spending my traineeship in the Bodleian Law Library. I am originally from a town in central Scotland, and have spent the last 6 years in Glasgow where I completed my degree in English Literature and History of Art at the University of Glasgow. While I have not travelled the furthest for the traineeship, as we have a few trainees from mainland Europe doing placements with us, Oxford certainly feels like a far cry from Glasgow! Most notably, having only experienced a blend of a city and campus university in Glasgow, getting my head around the collegiate system in Oxford has been difficult. Something I am coming to realise is that Oxford likes to do things VERY differently in many respects!

I was so pleased and grateful to have been offered a place on the traineeship, but also slightly intimidated! I have no previous professional experience of working in a library, but became very familiar with my university library spending (literally) every day there during my final year. I do, however, have around 8 years of customer service and retail experience which I think will come in extremely useful when on the enquiry desk and interacting with such a varied pool of readers in a library as busy as the BLL. Secondly, it was advised that it would be preferable if the BLL trainee had a decent grasp of a few languages, which thankfully I do. This has come in very useful when completing one of my integral tasks of organizing the weekly New Journal Display which boasts many foreign language texts. However, it had not aided when trying to decide which page is the title page when processing a text written in Chinese characters!

While the BLL interior seems very new after having a refurbishment in the last few years, the building itself was built in 1959-1964. As Bryony has stated below, it shares the St. Cross Building with the EFL and the Law Faculty and creates a series of three interlocking cubes. It has a very different feel from many of the college libraries dotted around Oxford, though it has definitely been built for purpose, with four floors of space for the 550,000 texts the Law Bod holds which are mainly on open access. Designed by Sir Leslie Martin (1908-2000) and Colin St John Wilson (1922-2007), the blocky exterior is juxtaposed with the light and airy atrium in the main reading room. Jeffrey Hackney, who was a law student at Wadham College when the building opened, describes:

“My first reaction to the building was that it had been modelled on an Aztec temple and it was a constant source of pleasant surprise that there were no human sacrifices at the top of the steps. “

However, during the exam period, I imagine many students are in as much terror and as helpless as the sacrificial lamb! In actual fact, Ruth Bird, (Bodleian Law Librarian 2004 – 2017) advises that there is notable influence from Alvar Aalto’s Säynätsalo Hall, and the external brick cladding intended to blend with the stone of the adjacent Holywell manor and St Cross Church.

One of the most interesting parts of my introductory weeks has been seeing the Official Papers holdings in rolling stacks on the ground floor. 2.5 linear kilometres of texts were moved from the basement of the Radcliffe Building to the Law Bod in 2009. Seeing reports and materials that have changed laws and the lives of people living in the UK has been a real treat and I’m hoping to do a blog post on some of the most interesting finds in the near future.

At the end of my third week, I have already learned SO much and I can’t wait to continue learning and gaining new skills from the extremely helpful teams housed in the BLL, as well as training alongside all the lovely trainees on the scheme. So far I’m not feeling the terror the sacrificial lamb, but I’ll get back to you on that once the mass of undergraduates start in a couple of weeks!

University of Oxford, The Faculty of Law, Accessed: September 2018, https://www.law.ox.ac.uk/about-us/about-faculty/st-cross-building 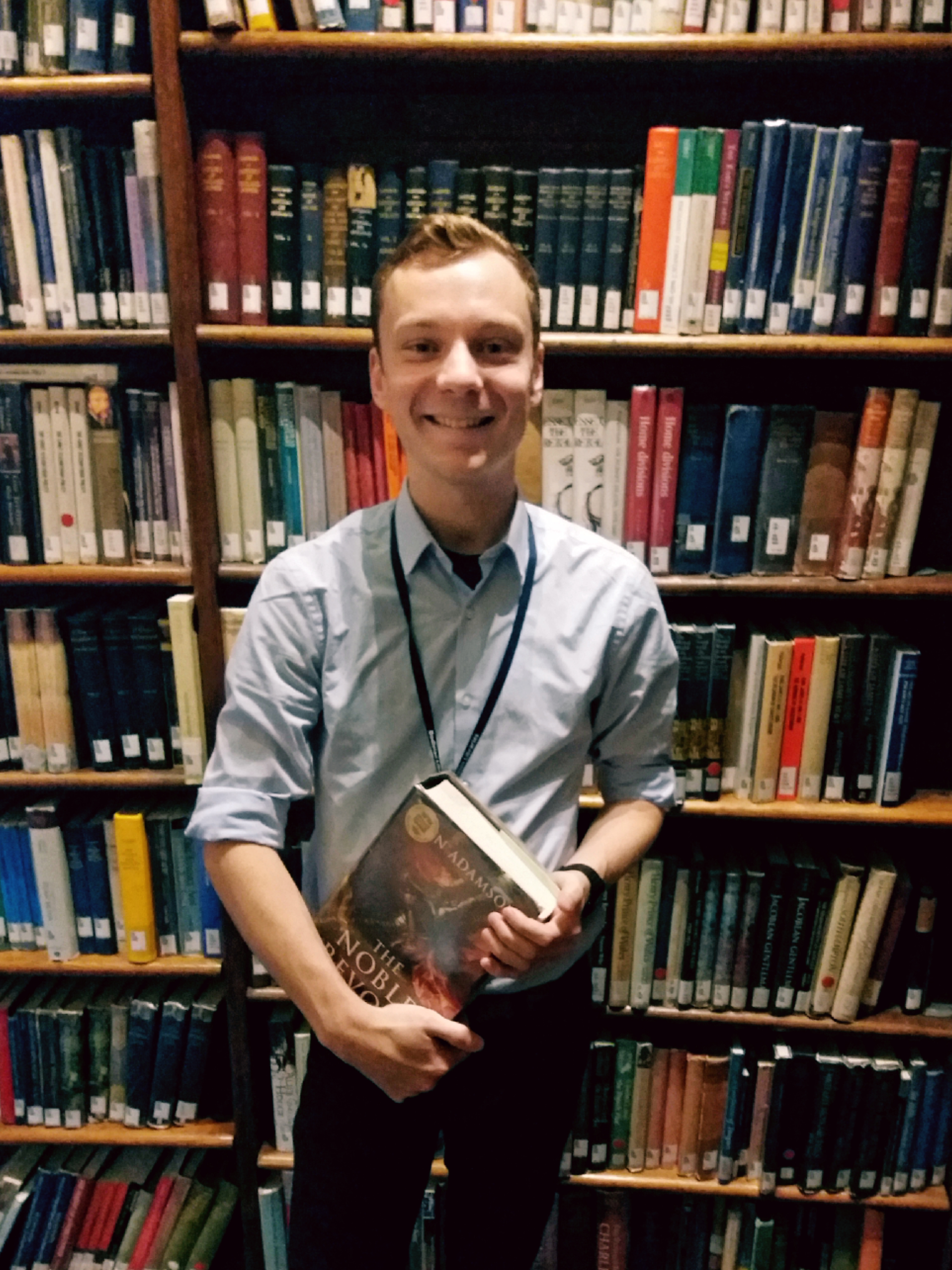 Hi! My name is Ross and I am this year’s graduate trainee at the History Faculty Library, though I’m not entirely new to the Bodleian Libraries experience. Last year, I returned from China to complete a part-time graduate programme in Historical Studies at the Department of Continuing Education here in Oxford. As I was quick to find out, the faculty library would be the first port of call for many of my research queries and most of the resources I’d need to complete my course.

Situated in the Radcliffe Camera and parts of the Gladstone Link below, the History Faculty Library is an interesting example of an embedded library in the sense that it shares the space with another much larger library (the Old Bodleian Library) and is encompassed by a complex of historic buildings that make up the ‘central site‘. Occupying such a unique location means the ‘HFL’ enjoys an eclectic and beautifully eccentric mix of architectural features across its four floors, with stunning views over Radcliffe Square to boot.  Henry James’ quote about the peculiar air of Oxford really hit home when I walked inside; I immediately fell in love with the space and found myself wanting to spend as much time there as possible. So began a career with the Bodleian Libraries.

“the peculiar air of Oxford—the air of liberty to care for the things of the mind assured and secured by machinery which is in itself a satisfaction to sense.”          – Henry James, English Hours

Initially working as a shelving assistant, I eventually found myself involved with a veritable miscellany of library tasks. I processed incoming acquisitions, assisted with a book move at the Wellcome Unit, covered evening shifts and took an additional weekend job at the Sackler Library. It was through these experiences, and an increasingly large network of colleagues, that I became aware of the Graduate Trainee Scheme. I jumped at the opportunity. For me, the traineeship represented a chance to receive a more comprehensive grounding in a library-related profession, one that would hopefully contextualise my part-time experiences and provide a preliminary framework for studying an MA in Information and Library Studies.

Although it is still early days, I certainly feel that the traineeship is shaping up to be far more than just that. Less than a fortnight into our year-long programme, I along with my fellow trainees have been introduced to Oxford University’s discovery tools, library management systems, staff development programmes and support networks, whilst a varied workload with duties ranging from the routine to the bizarre (dissuading a tourist from flying a drone over the Camera!) has filled the time in-between.

But the icing on this splendid albeit busy cake has been the people I’ve met so far. Twenty one of us make up this year’s trainee cohort, college trainees included, and we have shared some of our introductory sessions with three foreign-placement students as well. A truly multi-national and friendly bunch, it has been fascinating hearing about past professional experiences and future plans from people who share my passion for libraries. As the year progresses, I am eager to learn how the operational and logistical challenges facing their libraries differ from my own.

Casting the net a little wider, I feel those colleagues I have come into contact with across the entirety of the Bodleian Libraries have also been very welcoming. Course Directors, Line-managers, Subject Librarians, Reader Services and Technical Services Staff have explained procedures, clarified any issues and gone to great lengths to ensure I’ve landed on my feet. I am grateful for their support and the opportunities afforded me by the Libraries.