While I was in Manchester for the CILIP New Professionals Conference, I couldn’t resist visiting some of the cities famous libraries. Manchester has several unique libraries, including the fabulous and historic John Rylands Library on Deansgate. The Victorian gothic architecture and many carved bosses on the high, arched ceilings make this library seem like a cathedral. The collections at the John Rylands Library feature many rare books and manuscripts, including the St. John fragment, the earliest known fragment of the New Testament from the collection of Greek papyri.

The Central Library was unfortunately closed for renovations, and will not reopen until 2013, but it is also worth visiting for its Neoclassical rotunda. The library even has its own on-site theatre company, who often perform works in historic sites around Manchester such as the Ancoats Mills.

The first two months of my traineeship have seen many changes occurring in the science libraries, and it has been an interesting, (if often surreal) induction into librarianship. The Departmental libraries in Zoology and the Plant Sciences have closed, and the collections have mostly been merged with those of the Radcliffe Science Library. My first few days of work as a trainee were spent wrapping a corridor-long card catalogue drawer-by-drawer in cling film so that the cards would not be dislodged during moving – a “unique” experience, but important none-the-less, as a good portion of the references (pre-1938) are not catalogued on OLIS. Other tasks have included measuring and calculating shelf space for the ornithological journals and bulletins in the Alexander Library of Ornithology, and “blue bagging” duplicate journals for secure destruction (see the photo of Mont Blu which is all that remains of the former Zoology Departmental Library). I have also had the invaluable opportunity to participate in library induction tours and more specialised research skills presentations with the subject librarians at the Radcliffe Science Library.

On September 23, the Plant Sciences Library was officially closed with a “BBBL” (Brown Bag and Bubbly Lunch). Roger Mills, Head of Sciences, gave an excellent address outlining the history of the Plant Sciences Library and the Oxford Forest Information Service, and the work that has gone into the move of most of the Plant Sciences collections for inclusion in the Radcliffe Science Library. The future of ISBES was toasted with sparkling wine, and it was a wonderful opportunity to talk with the librarians about their work and experiences. The Plant Sciences Library is now closed, but the new Sherardian Library of Plant Taxonomy still remains associated with the Oxford Herbaria. Herbarium Curator Dr. Stephen Harris took us on a tour of the Herbaria, while special collections and biology subject librarians Anne Marie Townsend and Judith Pinfold took us on a tour of the library collections, including a glimpse of the magnificent Flora Graeca, first published in 1806, an incredible work of botanical illustration.

October 7 not only marked the official opening of the Book Storage Facility in Swindon, but it was also National Poetry Day. The Radcliffe Science Library celebrated with the Parallel UniVerses poetry evening, held in the entrance lounge of the RSL. The Parallel UniVerses poetry competition had been organised as a unique synthesis of science and art, and over 86 entries were received. Ten of these were selected to be read during the evening. It was a wonderfully festive use of the library space: although 40 people had booked for the evening, almost 100 people were in attendance. The mood was festive as the poets and their audience partook in hors d’oeuvres and wine before the event. The poems themselves were lovely, poignant and often touching reminders that science is not all cold laboratory benches and sterile white lab coats, but is a human endeavor.

(With Thanks to J. Ralph, G. Petrokofsky and O. Bridle for photographs)

Here’s an interesting article on The Guardian website about the role of libraries in today’s society and the different ways in which certain libraries have been trying to increase use and engage with the public:

A couple of weeks ago at the start of December, Helen and I were given the very important task of decorating the library for Christmas.  The beginning of December normally seems extremely early for Christmas decorations and is usually the time reserve for those eager Christmas obsessives however the very short terms at Oxford mean that Christmas must start at the end of November.   We put up a Christmas tree in the main reading room and a colleague of ours, Ron was in charge of putting up the festive CD decorations. 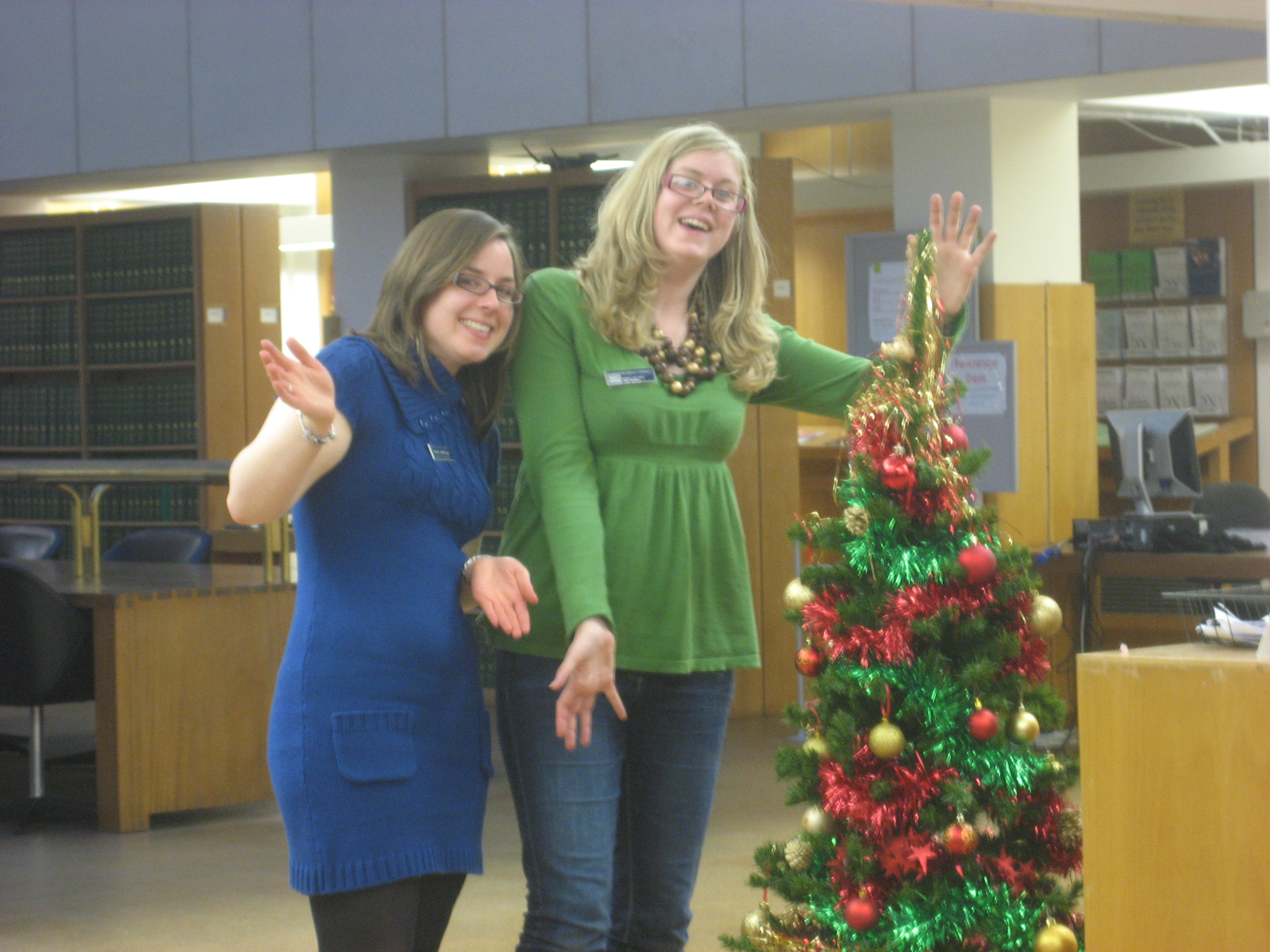 Excuse the silly poses, we were getting into the festive spirit and feeling overcome with joy thanks to a tinsel filled afternoon. 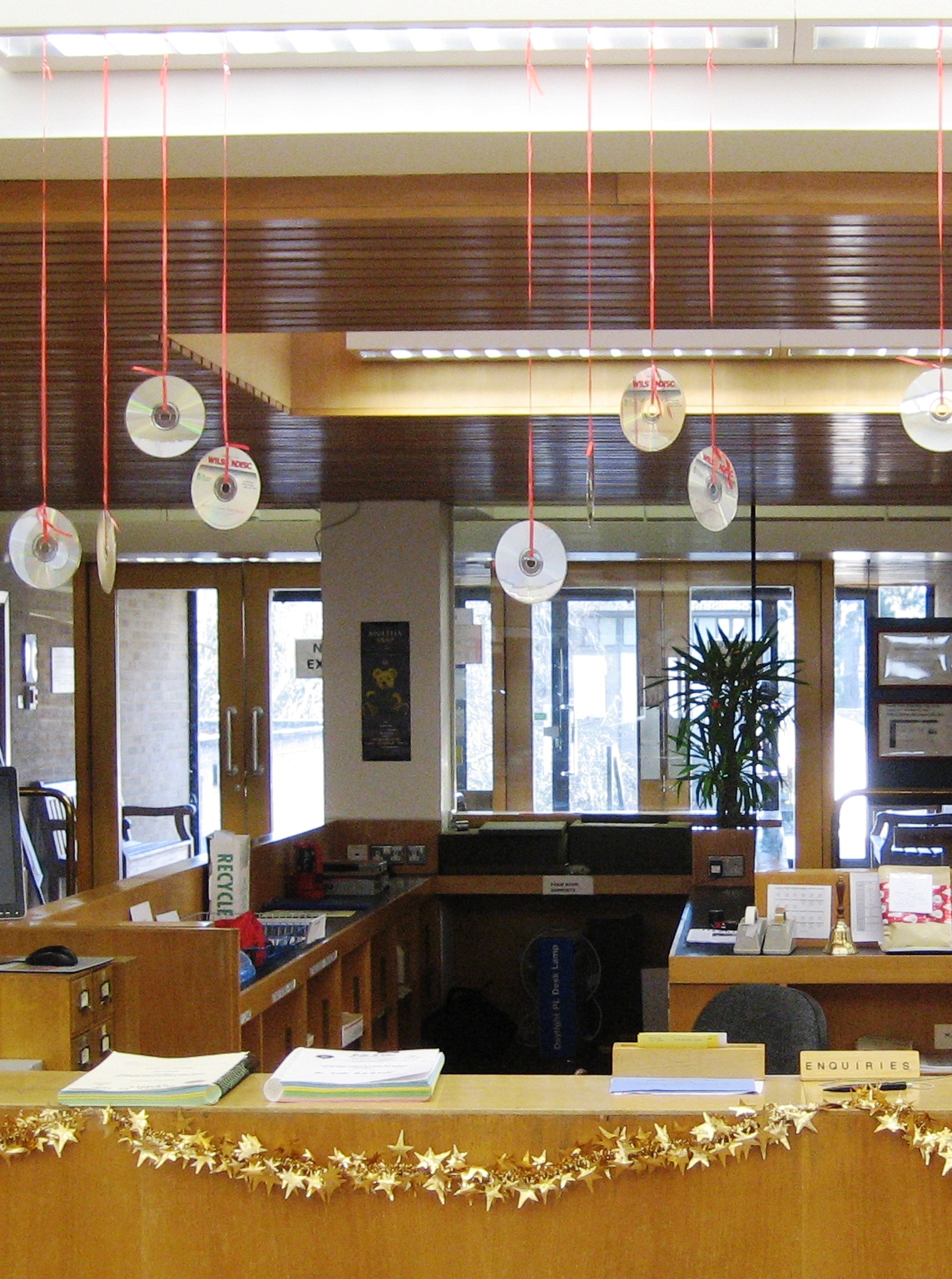 So that’s the Bodleian Law Library decorated for Christmas.  It’s nice to make the library look a bit festive around this time of year and decorating it early in time for 8th week was a good way of keeping those spirits up in the hectic close of term.   We ran a guess how many decorations on the Christmas tree competition with great success and lots of entries were received.  I had the fun task of counting the decorations as we put them up on the tree, numbers are not my strong point but I managed to keep track somehow.  In case you’re wondering, there were 42 decorations on our tree this year!  To make Christmas at the library even more of an event we held a shelf slip raffle at the end of 8th week. What’s a shelf slip raffle I hear you ask? Well everyone who is good enough to use a shelf slip to indicate that they’ve taken a book from a shelf was entered into a prize draw.  Shelf slips were collected and placed in a box, then drawn out and the winning names received some Amazon vouchers!

It certainly makes the library seem like a more festive place this close to Christmas and our readers seem to like the tree.  We are interested to hear festive tales from other Oxford libraries so feel free to share your thoughts.

Happy Christmas from Team Law ( aka Helen and Laura!)

This morning I came across the wonderful story of possibly the smallest library in the country on the When I Grow Up I Want To Be A Librarian blog, a Somerset village community have adopted the old village phone box and transformed it into a lending library.  It’s extremely simple too, people donate unwanted books, DVDs and CDs to the phone box and then borrow anything that takes their fancy.

Sounds like a fantastic way for the community to maintain some sort of library service within the village (the mobile library service was cancelled a few months ago)  and also preserve a classic symbol of Britishness in the process.  Small rural village communities are often cut off from many public services and for those without transport visiting a library can be difficult.  In the wake of the recession, have come increased budget cuts and financial pressure for local authorities and the needs of certain communities can be neglected.   I wonder if the public phone box library might spark a trend amongst similar rural communities across the country where library services are being cut and people are left without?

I was interested to see a link in this week’s Outline [OULS staff newsletter] to the following article:

Should libraries be places for quiet study or should they offer opportunities for interaction and more informal work?

Personally, I think there should be a mixture, but I appreciate this approach can’t be adopted in every library. Fundamentally, though, it comes back to the question of what libraries are for. This is question with as many different answers as there are library users – and the issue has been complicated further by the increased use of computer and online resources by students (for work purposes and otherwise).

What do you think?