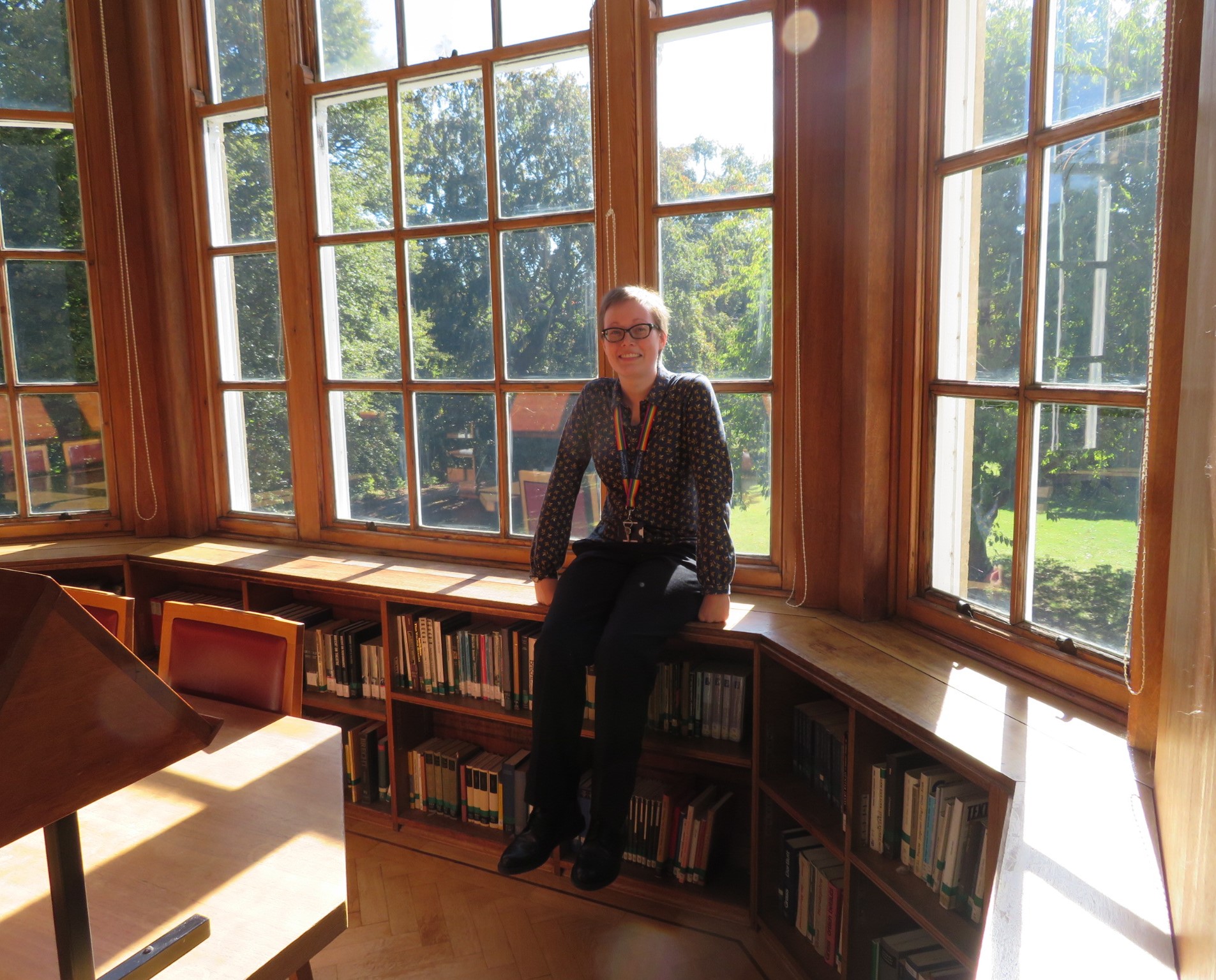 Me in the Upper Reading Room

My name’s Amy and I’m the graduate trainee at the Howard Piper Library at St Hugh’s College. I moved to Oxford from a small town on the west coast of Scotland, where I had lived most of my life so far. It was a big move – I didn’t know anyone in England and had only briefly visited Oxford twice before. Although I desperately miss tattie scones and haggis – and don’t get me started on the awful tap water – I really enjoy living here. There’s so much to see, and there are always events going on. And I think I’ve finally got the hang of Oxford’s jargon, after spending a few weeks under the impression that ‘battels’ was just a spelling mistake.

I recently completed an undergraduate degree in Digital Media and Information Studies, a CILIP accredited course, at the University of Glasgow. In my final year, I worked part-time at various public libraries in my local area. There I received a solid grounding in core library tasks, such as shelving and dealing with all manner of enquiries at the front desk. One morning I helped two grooms from entirely separate weddings print off their speeches, within an hour of one another, for weddings later that day. I filled in a Universal Credit application for a man who had never used a computer before, ran Lego and board game clubs, worked alone at smaller branches, and borrowed a mountain of books because it was impossible not to. I even got to stamp books out to people – we had no self-service machines, so circulation was entirely manual. I loved all of it, and the experience cemented my desire to pursue librarianship as a career. Books have always been my thing, so it seemed like the right path to take. 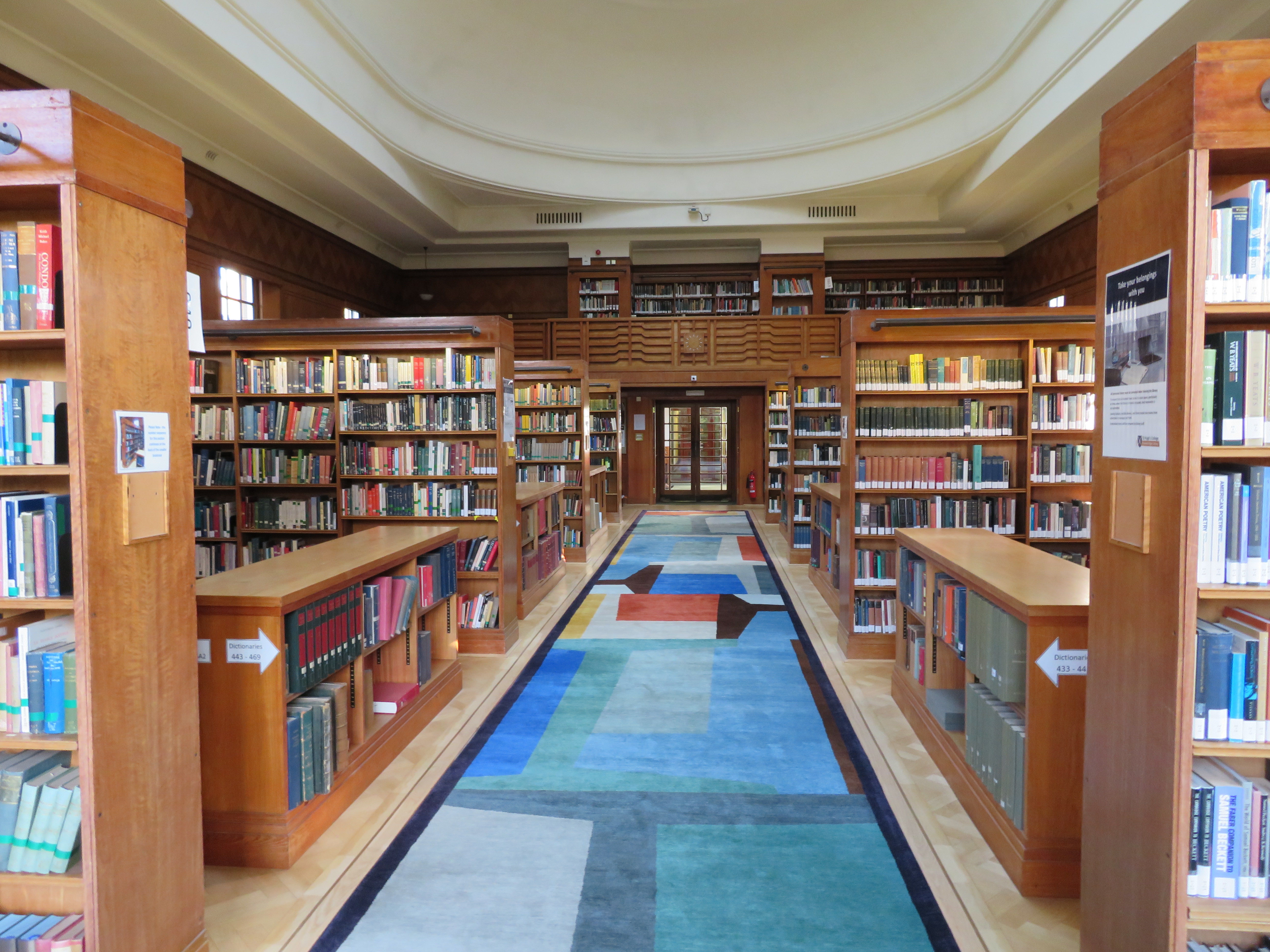 Although St Hugh’s College was founded in 1886, the current library building was opened in 1936. It currently holds around 75,000 books on a wide range of subjects, all classified under the Dewey Decimal system. We also have a modest rare book collection. I won’t provide an account of the history of St Hugh’s and the library here, but I recommend reading into it. St Hugh’s may be one of the younger colleges, but it has a fascinating past nonetheless, involving women’s suffrage and its time as a military hospital specialising in head injuries during the Second World War. 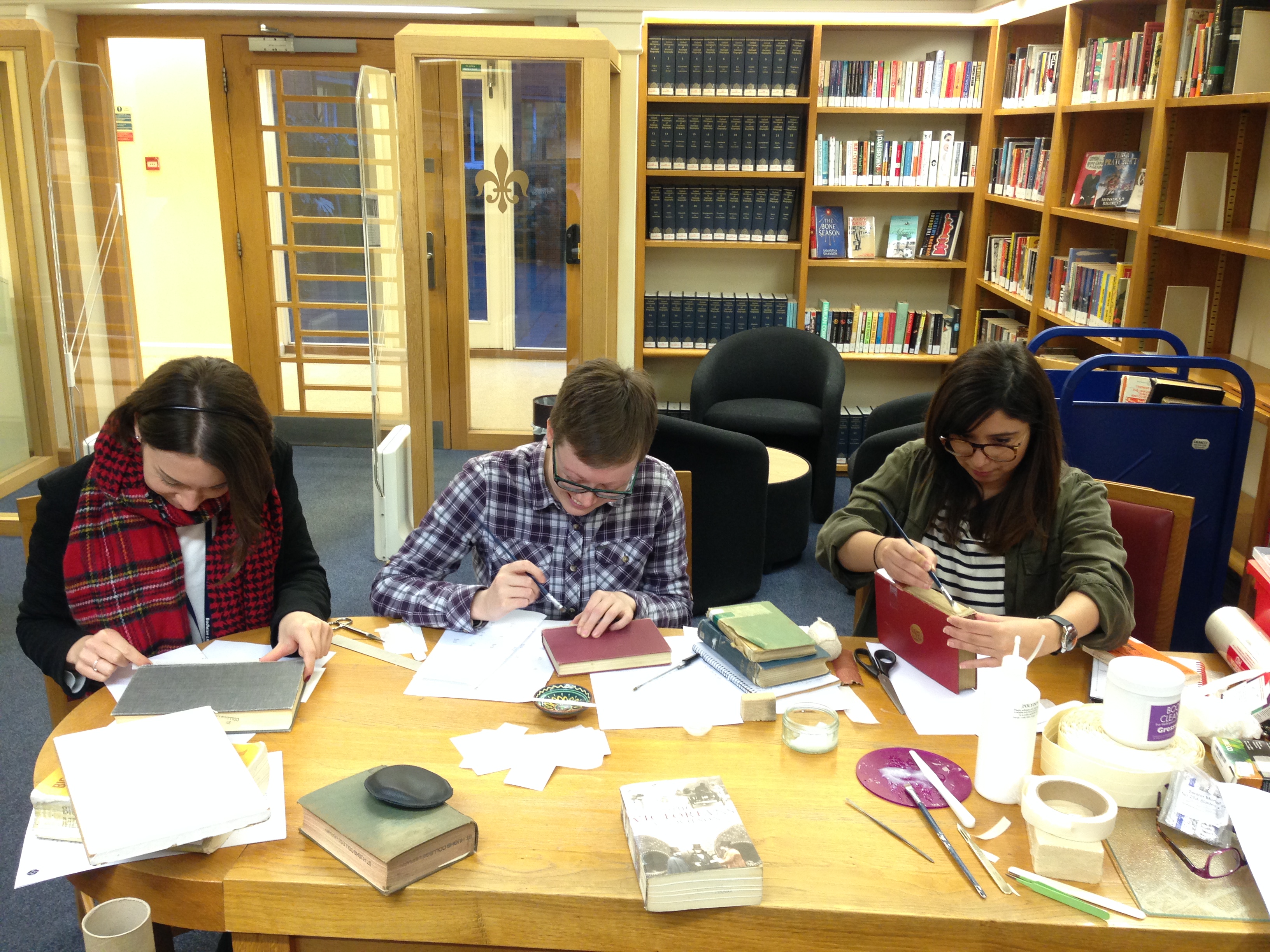 Holly, me and Nora at our book repair workshop, delivered by the wonderful Victoria Stevens.

There are only three of us in the library team, so I have quite a few responsibilities. I have a daily checklist of things to do, such as shelving, posting on our social media accounts, checking the CCTV for people setting off the book alarm at the door and walking around the library to make sure everything is okay. I empty the two book bins every morning and afternoon (we staff the library 9-5 on weekdays but it’s open 24/7), and as term goes on the situation gets more silly – the students stuff the first bin until it’s overflowing, but when I open the second bin there’s hardly anything in it. At the end of term, they pile the books on the floor outside of the bins. I also undertake more time-intensive tasks and projects, such as processing new books and redesigning the library posters. 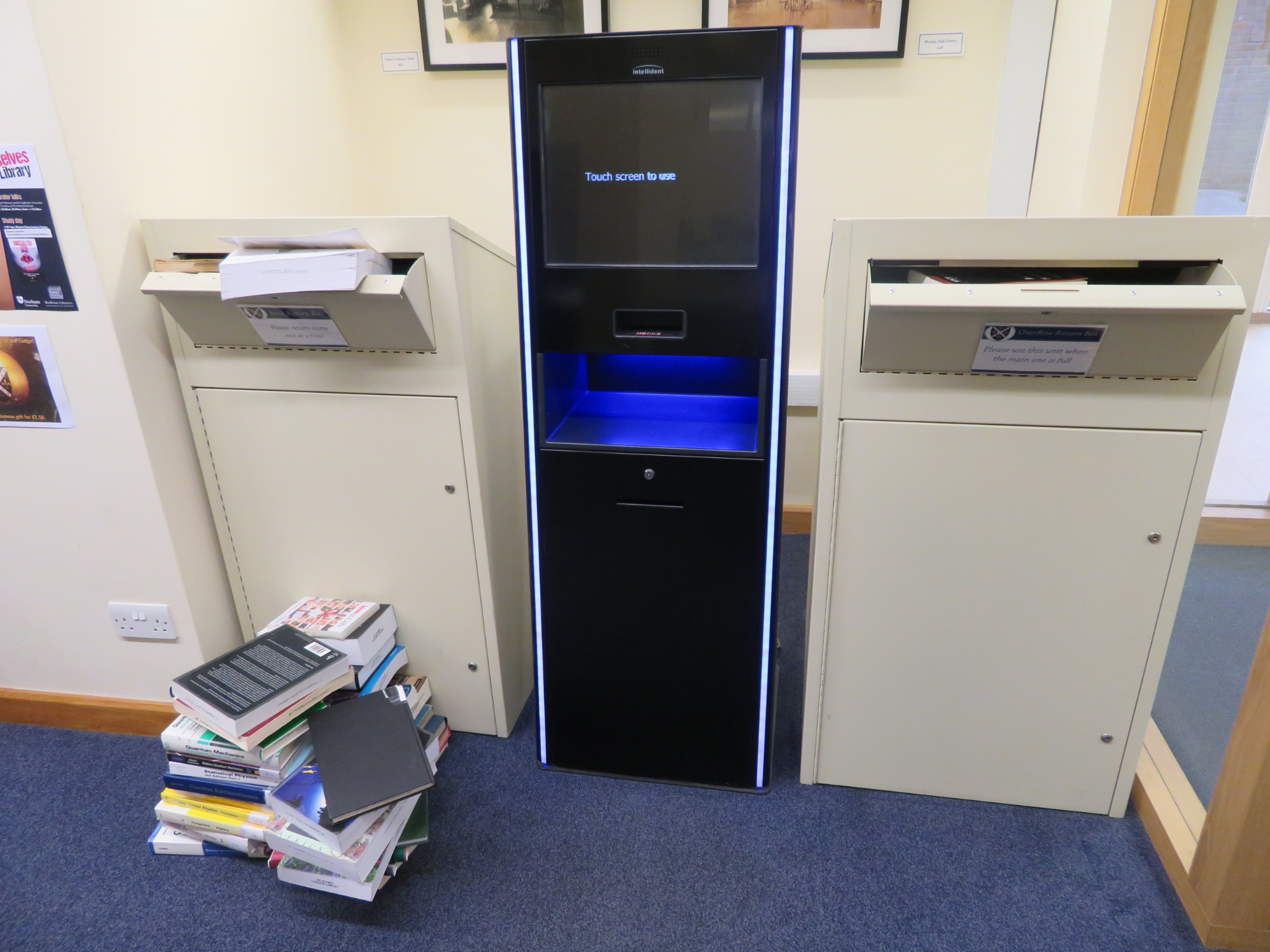 In the library, no one can hear you scream internally.

One big project I’ve been working on since November is reclassification. Essentially, over the last eight or so years (and undoubtedly at least a couple of years more ahead) the books’ shelfmarks have been gradually changed from an old version of Dewey Decimal Classification to Dewey 23, the most recent. This will move a few books around to different subject areas, but more importantly will give them extra numbers and letters in their shelfmark. This will make them so much easier to shelve and find. It’s one of my favourite things to do at work – figuring out the correct shelfmark feels like an investigation, and Dewey is my favourite classification system. Some of the books are simple enough to classify, while others require a bit more deliberation (and could fit in more than one place). Relabelling hundreds of books can get a little tiresome though. 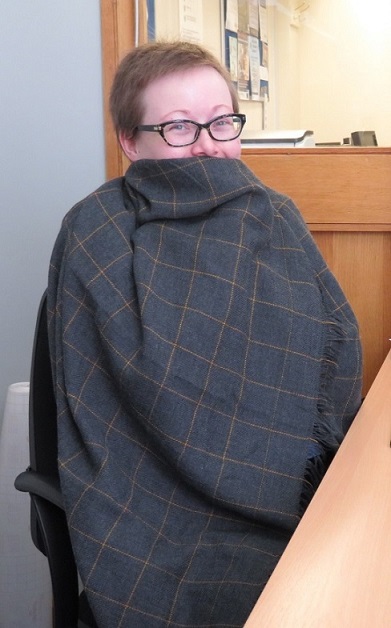 Testing out some of the new study aids on a cold day in the office.

I intended to write and publish this introductory blog post not long after I started the traineeship five months ago, but I’ve been so busy that I put it on the back burner for ages. My initial concept was to write down my fears about this job and then, further down the line, write another post to assess how far I’d come. Thankfully I can say that I am not rubbish at book processing – I’m awful at wrapping presents, so this was a major concern – and while I have seen a few spiders around the library (such as the time I had to dust away an entire cobweb with a spider in the centre, on some bookshelves), none have literally jumped out at me. 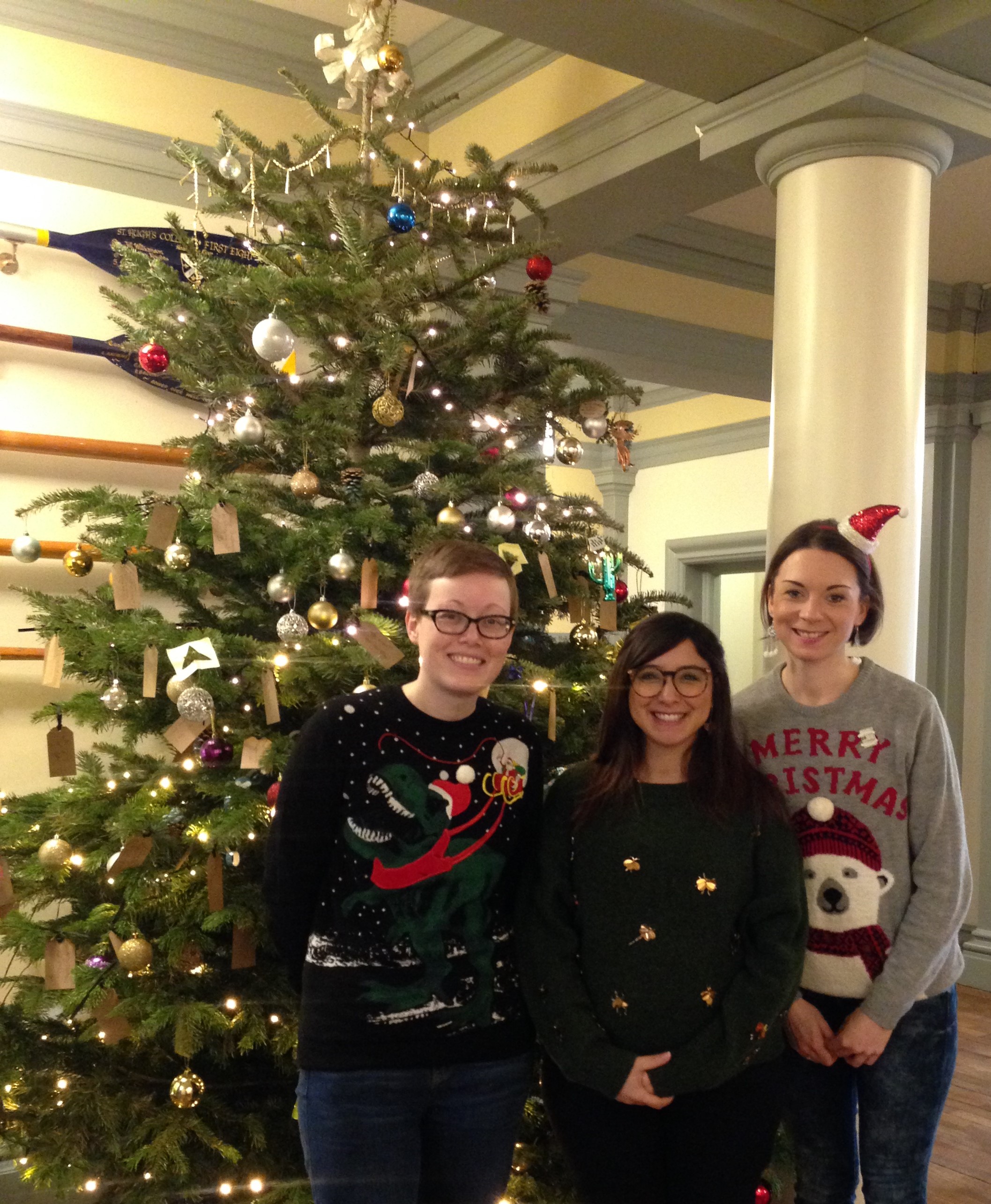 The library team on the College’s Christmas Jumper Day.

Working in a college library means being part of the college community. At lunch we sit and chat with staff from other departments in the dining hall (as we eat our free meals!). There are numerous events throughout the year to attend, such as: staff coffee mornings, bake sales and raffles, Christmas lunch, Christmas tree decorating, and gatherings at the Principal’s Lodgings. One particularly exciting development was the arrival of two kittens, who were just four months old when the College adopted them. They are brother and sister: the male ginger is called Professor Biscuits, and the female tabby is Admiral Flapjack (though I just call her Jack). They are very sociable and adore all the attention from staff and students alike. Once cat flaps are installed around college, they will be let loose and allowed to roam (almost) wherever they please. 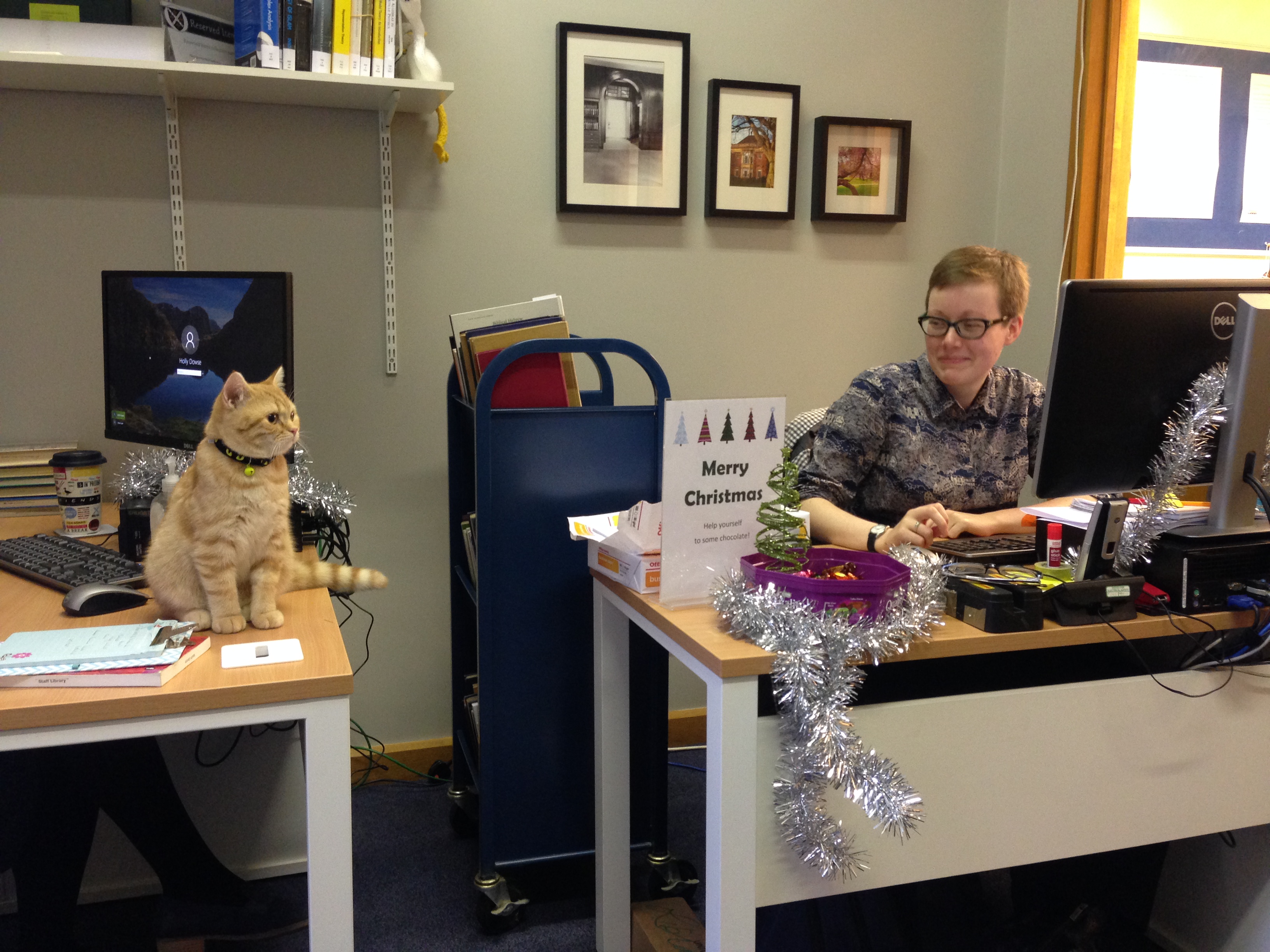 Once I have completed the trainee scheme, I plan to undertake a postgraduate degree in librarianship. I’ve been exceedingly lucky to have been asked to remain at St Hugh’s for a further two years as a full-time library assistant, so I will do my masters part-time distance alongside this. After that, who knows!