. . . Research and Study in the Sackler Library on Sundays! 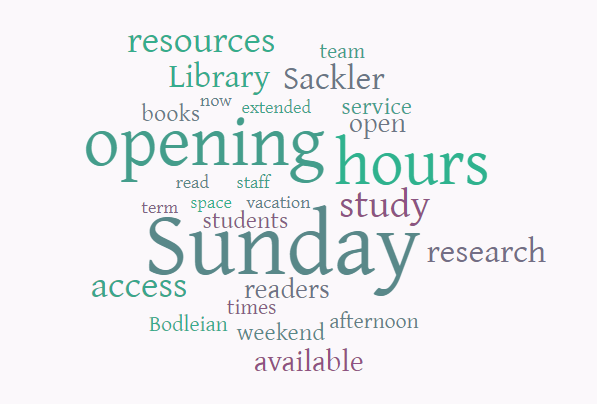 One of the aims of the Sackler Library’s blog is to provide insights into behind-the-scene activities that enable readers to conduct Sackler-based research and study throughout the year. This, our first contribution to the Sackler 101 series, discusses the introduction of Sunday opening, tells how it came about, and reports on reader response.

At 12:00 noon on 14 January 2018, the beginning of Hilary Term, the Sackler opened on a Sunday for the first time. Planned as a soft launch, and despite minimal advertising, by the time the Library closed at 18:00 the reader count had reached fifty-five and the Sackler had established itself as the University library with the longest year-round, staffed opening hours:

Within seconds of circulating to various student groups the announcement about Sunday opening, we received email responses such as the following:

“THIS IS BRILLIANT!!! The best news to arrive in my inbox yet! Thank you soooo much!”

“Now might be a good time to reiterate how grateful I am to you all for [. . .] actively working to improve it and extend its opening hours!”

“Sackler Library opening 12-6 on a Sunday is life-changing.”

Once the inevitable concerns about the new initiative had been dispelled, one almost forgot that this was anything other than business as (weekend) usual – with a similar range of library services on offer as on Saturdays.

Although library operations ran smoothly that first day, Sunday opening at the Sackler had been several years in the making and not without challenges. Given that many colleges have provided 24/7 library access for years, it may seem puzzling that the Bodleian Libraries didn’t have longer opening hours more generally. (Indeed, the demand for Sackler Sunday opening dated back a decade or more.) But, then, access to college libraries is relatively easy to manage and regulate, even when there are no staff present. Spaces are smaller and are familiar to their readers (college members only). By contrast, the Bodleian Libraries estate is made up of some extremely complex buildings and collections, accessible to University-based readers and many others too, and thus it is more difficult for readers to navigate their complicated structures unaided.

The results of a Bodleian Libraries Reader Survey in 2012, together with various smaller consultations around the same time, made it clear that one of undergraduates’ and graduate students’ most pressing needs was increased opening hours. Subsequent financial pressure caused any plans to be shelved at that time. By 2017, however, a further Reader Survey made it clear that the need still existed and resulted in a key aim of the Bodleian Libraries Strategy 2017-2022: ‘We will improve access to highly used hub libraries by increasing opening hours to better reflect user requirements, focusing especially on weekend and vacation hours.’ (Key strategic goal 3: Access, engagement and outreach.) It was obvious that the Sackler, with its already generous year-round opening hours, its wide-ranging collections addressing the research, study and teaching needs of multiple departments and faculties, was a natural candidate for extended opening. We decided, therefore, to introduce Sunday opening asap, and that it would run, initially, on a two-year trial basis.

In order to make Sunday opening a reality at the Sackler, a number of mechanisms needed to be in place. The library’s entry and alarm system had to be reprogrammed, web pages and other signage updated, departments notified. In parallel, new job descriptions were needed, and additional library assistants had to be recruited and trained. As on Saturdays, the Sunday Reader Services staff provide basic assistance to readers (more complex queries are referred to specialist staff), carry out reshelving and stock maintenance, and are also engaged in project work.

Since Sunday opening began, word has spread and the number of readers using the library has increased week-on-week. Within one month of opening, the Sunday reader count already stood at 135. Reader numbers for the corresponding Saturdays, moreover, do not appear to have been significantly affected. Inevitably, vacation figures have been lower, but still not that far below 100.

Judging by its current success, it seems unlikely that Sunday opening will end after the two-year trial.