2021 marked the 700th anniversary of the death of Dante Alighieri, Florentine poet, author of the Divine Comedy, and an icon of medieval European literature. The many celebrations held in his honour ranged from exhibitions, rare book displays and academic conferences to live readings of the poem and even Dante-themed ice-creams. This cultural eclecticism attests to the enduring impact of Dante’s works as well as the celebrity of his image, an image able to be absorbed into gastronomic promotions as much as lauded for its literary might. The distorting effects of fame were a preoccupation of Dante who, at the start of his philosophical treatise the Convivio, complains: ‘I have appeared before the eyes of many who, perhaps because of some report (fama), had imagined me in another light […since] the image generated by fame alone is always greater, whatever it may be, than the imagined thing in its true state’ (Convivio. I.iii.11).

Uncovering the ‘true state’ of Dante and his works is a primary aim of Dante Studies, an area of research that has thrived at Oxford since the late 19th century. The University’s museums and libraries have always played a crucial role in this path of discovery, preserving rich records of the poet’s reception and the ongoing vitality of his readerly appeal. The recent exhibition of items from the Sackler and Taylor Institution libraries, ‘Illustrating Dante’s Divine Comedy’, was exemplary in this respect. Curated by Professor Gervase Rosser and Clare Hills-Nova with items from Bodleian Libraries collections (principally, Sackler Library and Taylor Institution Library), the display reflected the depth and eclecticism of the visual tradition held by the University, from the intricately illuminated pages of fourteenth-century manuscripts to the neo-expressionist lithographs produced by contemporary artist Mimmo Paladino of the recent centenary year.

Presided over by the Taylorian’s august bust of Dante, whose personal iconography is a topic of myth and debate, the exhibition showcased an array of colourful interpretations of the Comedy. What the poet himself might have made of this visual afterlife becomes an almost unavoidable area of speculation. In an apocryphal tale from the 1390s, the Florentine writer Franco Sacchetti imagines Dante vociferously defending his poem against misquotation by a blacksmith, exclaiming ‘I have no other craft, and you’re ruining it’ (Trecentonovelle, 114). As far as craft goes, the Comedy is very much a literary artefact, addressing its reader no less than fifteen times and frequently emphasising the ineffability of its own descriptions. What is a reader of Dante’s poem to make of visual renditions of his text?

Final year Italian Literature and Languages students from Pembroke, Merton and Wadham colleges turned their attention to this question, using their knowledge of Dante’s poem to examine the rich visual traditions on display in the Taylorian exhibition. Offering insights into the material history and visual details of some of the objects on display, Izzy, Joshua, Anna, Matt and Olivia explore the role of these illustrations as creative records of the poem’s reception, and offer reflections on why they are interested in reading Dante today. 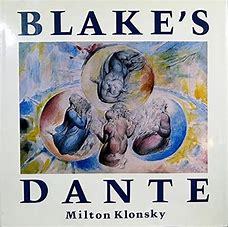 Klomsky presents Blake’s evocative set of drawings and engravings for Dante’s Comedy, commissioned by John Linnell who sought to provide inspiration for Blake’s creativity alongside some much-needed money towards the end of his life. Few are complete yet this doesn’t make the rest any less engaging. Rather, we are granted insight into Blake’s artistic process, imagining for ourselves what a ‘completed, coloured-in’ version might look like. The works hug the text closely, although Blake didn’t always agree with Dante’s politics, revealed through damning remarks to friends. Small deviations appear in his watercolours, too. The Angel at Purgatory’s entrance seems bored or miserable, his eyelids half-shut; in Blake’s representation of Inferno 14, fire burns upwards rather than falling downwards. Could this be an act of defiance against Dante’s choice of infernal punishment known as the contrapasso, whereby sinners experienced a form of retribution directly related to their sin, often in inverse form? Politics, theology, ideas about fortune and sexuality all add nuance to Blake’s paintings. For, after all, going from one art form to another can never enact an exact ‘translation’. Blake’s illustrations, while rooted in the Romantic era, conjure up the Renaissance – the faces have a touch of Botticelli, or perhaps da Vinci, about them. Imaginative, unsettling and profoundly beautiful, Blake’s drawings establish a dialogue not only with Dante but also with other illustrators, over borders and across centuries. A perusal of Klomsky’s book reveals just how re-presenting the work of another is itself an exegesis – an act of personal interpretation and subsequent production.

This image shows Dante presenting his work to the doge of Venice. The regal stature of the doge may call to mind the exile Dante suffered during the last twenty years of his life, since he learned ‘the bitterness of foreign bread’ (‘come sa di sale / lo pane altrui,’ Par. XVII.58–59) and was always both privileged and humbled by the patronage of other courts. The position of the crown above the doge’s head may be significant: in Paradiso, Dante fantasises that one day ‘I will return a poet, and at the font where I was baptised I will take the crown’ (‘ritorneró poeta, e in sul fonte / del mio battesmo prenderó ‘l cappello,’ Par. XXV.8–9) but in this image, it is the doge, to whom the poet comes in humility, that wears the crown. The faces in the crowd also provoke some thought – why do those to the right seem to be looking upwards towards the sky? What are those on the left looking at? Only the doge seems to be looking directly at the Tuscan poet. The dedication of this edition to Elizabeth Petrovna, Empress of Russia from 1741 until her death in 1762, attests to the fact that that Dante’s presence in Russia grew in the eighteenth century. Boris Antonov tells us that Petrovna encouraged Ivan Shuvalov’s foundation of the Imperial Academy of Arts and financed the grandiose Baroque projects of her favourite architect, Bartolomeo Rastrelli, particularly in the Peterhof Palace. She was clearly very interested in the arts (she spoke French, Italian and German as well as Russian), so it should come as no surprise that she should be fond of Dante. Dante’s impact on Russian culture continued long after her death, leaving a mark on the nation’s poetic symbolism. One Russian writer who was deeply interested in Italy and, by extension, Dante, is Nikolai Gogol. His book Dead Souls, described by him as a poem (despite being written in prose form), was intended to be the first part, i.e., Inferno, (set in contemporary Russia) of his own Divine Comedy. Gogol died before finishing the trilogy, and in a Virgilian act of insanity, burned the second part of Dead Souls. As well as his imitation of classical precedents (he wanted to imitate the Odyssey and Homeric epics), Gogol shares with Dante the use of almost uncomfortable humour and criticism of corruption. Another Russian whose work includes reference to Dante is Tchaikovsky. His orchestral fantasia Francesca da Rimini, Op. 32 (1876) was inspired by an episode in Canto V of the Inferno. In his correspondence, Tchaikovsky frequently quoted lines from Inferno V ‘there is no greater sorrow than to recall moments of happiness in misery’ (‘Nessun maggior dolore / che ricordarsi del tempo felice / ne la miseria,’ Inf. V.121–23), drawing on the enduring pathos of Dante’s infernal lovers.

Landino and Vellutello’s combined commentary on Dante’s Divina Commedia was originally published in 1564 by the Venetian typographer Sessa, under the editorial supervision of Francesco Sansovino. Consisting of 28 introductory leaves and 392 leaves of commentary, this volume returns to the folio format of medieval tradition, incorporating woodcut illustrations from Marcolini’s Commedia (1544) and the two commentaries with citations of Dante’s poem. The illustrations, in contrast to previous iconographic tradition, act as a continuation of the commentaries, focusing particularly on the topography of Dante’s Afterlife. The combination of Landino and Vellutello’s commentaries on the Commedia (originally published in 1481 and 1544 respectively) is also novel, as it integrates two different approaches: Landino prioritises allegory whilst Vellutello focuses on meaning. Such innovation enjoyed public acclaim, and Sessa re-published the volume in 1578 and 1596 with minimal corrections. Of particular interest is the great authority given to Landino and Vellutello over Dante’s poem. Note, for example, how snippets of the Commedia are explained both by the ‘Argomento’ canto summary under the illustrations and by the double commentary which engulfs the terzine; this allows the commentators to guide the reader’s interpretation, reflecting medieval tradition whereby commentators largely assumed superiority over their subject texts. Considering Dante’s modern dominance within the Italian literary canon, such authority afforded to Landino and Vellutello intrigued me, with this hierarchical organisation – whereby the two commentators are, arguably, superior to the poet – what first drew me to the work. The combination of two commentaries, illustrations, and an extended introduction including a background on Dante’s Florence and his vocabulary, would have made this text an excellent guide to reading and understanding the poem. As a student of Italian myself, this insight into how Renaissance readers might have approached their study of Dante was what interested me most about the work.

This facsimile of Botticelli’s original drawing from c. 1481–88 depicts the Terrace of Pride in canto X of Purgatorio. Botticelli’s drawings distinguished themselves from other fourteenth-century representations of Dante’s text in their presentation of a continuous narrative. Instead of focusing on a single incident in the canto, we are taken, like Dante, through the Terrace of Pride by Virgil, whose guiding arm indicates the chronology of the scene. First, we see Dante and Virgil emerging from a crevice in the bottom left. Then, having ascended onto the terrace itself, we see four separate scenes that move in a rightward direction. The first three of these, depicting Dante and Virgil gazing at marble engravings of biblical and pagan stories exemplifying humility, layer narratives within the main narrative of Dante and Virgil’s journey, mirroring the effect Dante creates in his text through ekphrastic descriptions of the engravings. In this way, Botticelli’s drawing captures the depth and complexity of Dante’s narrative, instead of presenting one static event. I find the astonishing level of detail intriguing, particularly the representation of marble engraving in the image, a virtuosic display of Botticelli’s own skill as a painter (and maybe also a sign of pride). The original was part of a wider collection of illustrations that were commissioned by the artist’s patron, Lorenzo di Pierfrancesco de’ Medici, which, when brought to sale in the late 19th century, were purchased by Friedrich Lippmann and placed in the Kupferstichkabinett in Berlin. This remarkably detailed set of facsimiles dates from around the time of the sale, an artefact in its own right.

Botticelli’s late fifteenth-century drawing for Purgatorio I, often thought to have been commissioned by Lorenzo di Pierfrancesco de’ Medici, piqued my interest specifically due to the challenge posed to the artist to portray both this particular canto and introduce the viewer to a whole new cantica, that of Purgatory. The drawing shows Dante and Virgil entering the realm of Purgatory, where they meet its guardian, Cato (the figure furthest right), who then advises Virgil to wash Dante clean of the filth from his journey through Hell. Moving right to left, the following elements of the canto are illustrated: Cato halts the poets and asks them their business; Virgil plucks grass to cleanse Dante; Virgil wraps reeds around Dante’s waist; a ship-full of new souls arrives on the shores of Purgatory. These events occur one after the other, yet Botticelli decides to include each moment simultaneously in his drawing, giving a sense of unity and circularity to this stage of the afterlife, whilst choosing to give each stage equal status. This continuity is further emphasised by his inclusion of the ship-full of souls furthest to the right that will be described in the second canto of Purgatory, offering a conceptual connection between the composition of the image and movement of the narrative in the text.