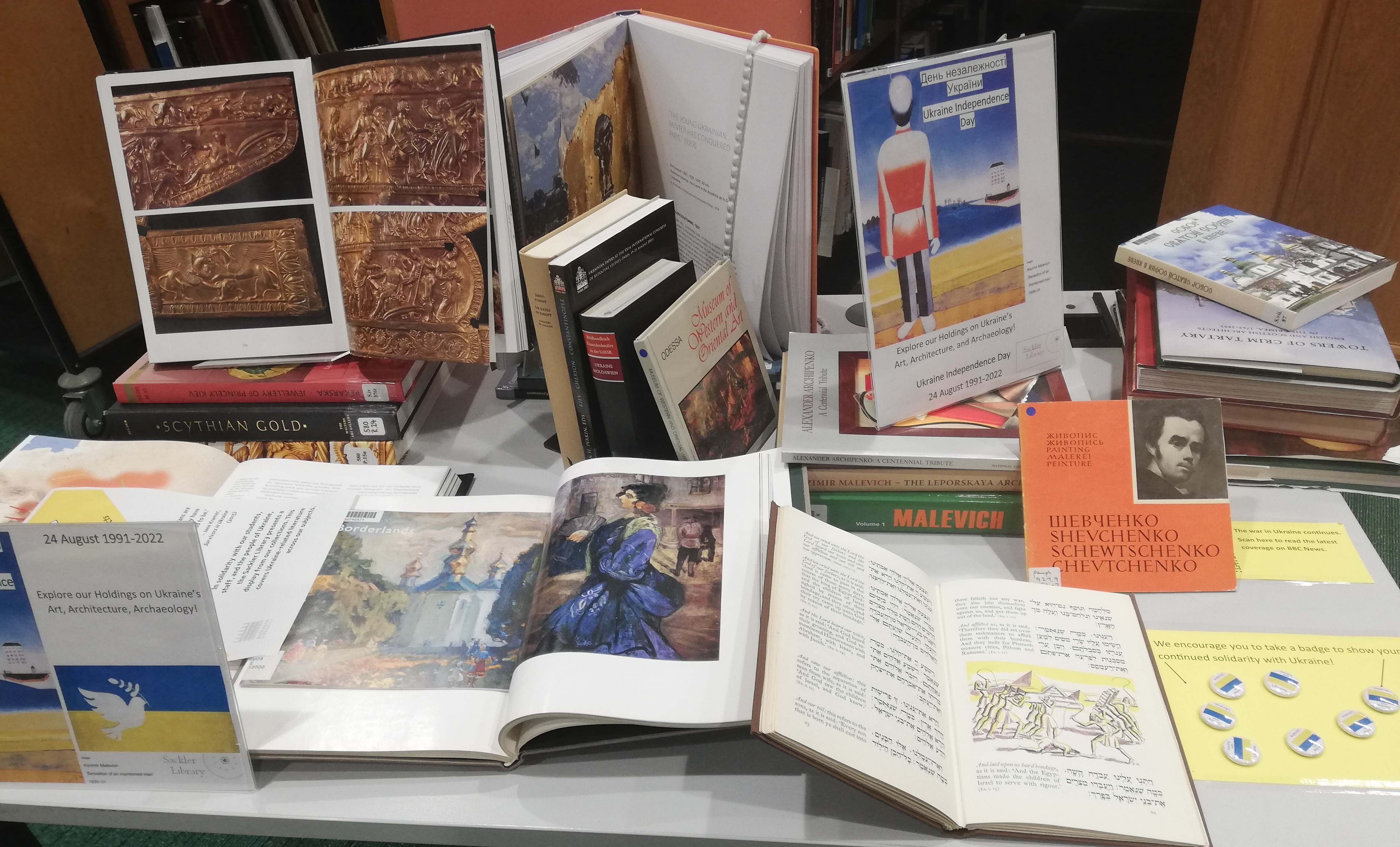 The Sackler Library has hosted a display celebrating the unique cultural heritage of Ukraine since the start of the Russian invasion back in February (see below for one such iteration).

Although the display was curated and regularly updated (by Graduate Library Trainee Izzie Salter, during her traineeship) it was felt that something new should be created; both to mark Ukraine Independence Day and to do what the Libraries could to promote an awareness of Ukraine’s artistic, archaeological and architectural heritage. There was also the opportunity to display the breadth of the Sackler’s collections, stretching from archaeological findings, including Scythian jewellery, through the Golden Age of Kyiv and the treasures of the churches, up to the strife of recent centuries and events where avant-garde and contemporary artists have continued the varieties of a resilient Ukrainian culture.

As the deadline of Ukraine Independence Day was close, I wanted to focus largely on the Sackler’s collections as they were immediately accessible (compared to the items held in other libraries) and could be selected for visual impact and as part of a curated collection focusing on material culture. I also wanted to take the opportunity to highlight individual artists who I felt had made important contributions to Ukraine’s culture. One of the more interesting issues of the conflict was also the debate about what constituted an independent Ukraine and whether there was such a nationality as the Ukrainians; from the history of nomadic populations and disputed borders to the internationalism of the USSR, masking famines and deportations. By promoting individual artists, I felt I could examine the histories of people such as Kazimir Malevich, an ethnically Polish artist born in Kiev, highly regarded as a leading figure in the Soviet avant-garde who described his nationality as Ukrainian when arrested for crimes against ‘Socialist Realism’. Another figure I found to be of interest was Donia Naschen, born in Zhitomir (then Russia, now Ukraine) whose family fled tsarist pogroms to settle in London, illustrating editions of Gogol, translations of the Haggadah, and WWII propaganda posters. I wanted to take the opportunity to highlight such individuals, from various backgrounds, linked by war and exile, but marked, I felt, by the shared environment of Ukraine and its cultures.

It was also necessary to create a poster to publicize the display. While researching the artists I had seen a particular work by Malevich which, unlike his more abstract works, shows a figure, almost devoid of feature, standing against a background that closely matches the Ukraine flag. Although the figure is faceless it seemed that this made it more representative of a people, with its seeming motionless, expressing an air of steadfastness.

While reading about the painting technique used by Malevich, the building of layers of paint to achieve a unique colour through the accumulation of surfaces, it occurred to me that I could add a (digital) layer of yellow to the image to heighten the resemblance to the flag without completely effacing the underlying image. I felt that this could be symbolic of the various histories of Ukraine and work as a promotional poster for the display, which I intended to reflect the Sackler’s holdings on Ukraine’s culture, celebrating its Independence Day, while extending beyond the war. The alterations to the image were made with GIMP, using largely fill and brush effects to retain a paint resemblance and allow the original image to show through. This was then pasted into a Word document to enable revisions to the text of the poster to be easily made.

With the art, archaeology and architecture collections that would make up the display, I wanted to include some books, such as ‘The gates of Europe: a history of Ukraine’ that would give an accessible overview of the nation’s history, combined with books, preferably in one of the languages previously/currently used in Ukraine, and from the Sackler holdings, that could address more specific topics. I wanted these, as being largely textual, to be arranged in a stack similar to a bookshop display to encourage people to feel free to browse the volumes without feeling that they were tampering with an arranged display.

To complement this and to reflect the strengths of the Sackler Library collections in architecture, archaeology and art I decided to group books in an order that would broadly follow the layout of the collections around the Sackler’s five-floor building. (See below image galleries.) So, starting from the left-hand side of the display, with items from the archaeology collections (normally housed on the Library’s lower floors) forming a pillar surmounted by a striking visual image. Complementing this, I placed a German language book on the early history of the Crimea, choosing a map showing the Scythians’ movement through the Crimea, which I hoped would display the long history of migration while showing Ukraine and the currently annexed Crimea as deeply connected geographies. The facing page also had illustrations of archaeological finds, which I wanted as a demonstration of the scientific aspect of that collection. While arranging the display I became concerned that a prominent map of an invasion might not be suitable for a day celebrating that nation’s independence. To balance this, I placed a book showing the collection of the Lviv Picture Gallery, open at a page containing a portrait of a woman dressed in blue and yellow.

Echoing this, and shifting to the Sackler Library’s art collections, I placed a selection of books on individual artists in the space behind, with the book, ‘Alexis Gritchenko: Dynamocolor’ opened at a painting that again had strong use of yellow and blue facing the chapter title quotation ‘The Young Ukrainian Artist Has Conquered Paris’ which I felt demonstrated the importance of Ukraine’s contribution to global culture and refuted the claim that Ukraine was merely a Russian province whose sense of nationhood was a recent Western creation.

To support the poster, I placed a book with Malevich’s name clearly visible. Although the Sackler has impressive holdings of publications on this artist I was careful about keeping the focus upon Ukraine Independence Day, so I restricted myself to one book on Malevich and one book about the Anna Leporskaya collection of his work, as she was an important Ukraine artist in her own right. I also felt her work as an archivist indicated the importance of cultural institutions as collective memory-banks. Below this, I placed a copy of the Haggadah, open at Donia Naschen’s illustration of Israel’s bondage, as I felt this would be a recognisable scene and that the yellow matched the adjacent promotion of badges supporting Ukraine.

(Please collect your Ukraine badge from the display.)

Finally, I placed another group of books themed around religious art and church buildings, as this would represent the Sackler’s holdings on architecture, and the significance of the granting of autocephaly to the Orthodox Church of Ukraine in 2019, described by the then president as ‘a charter of [Ukraine’s] spiritual independence’.

Although reasonably happy with the final arrangement of the display, I was conscious of the need to show traditionally underrepresented artists and cultures within the Ukraine spectrum. Although work on these categories has been published recently, many of these publications are available primarily online so I was unable to include them in the display. I also wanted to make better use of the Sackler’s collections of art journals, especially regarding more contemporary artists. As the plan is to update the display in coming weeks I hope to be able to include this material in future arrangements.

Pekarska, L. & others
Jewellery of Princely Kiev: The Kiev Hoards in the British Museum and the Metropolitan Museum of Art
S.iv. 376

Plokhy, Serhii.
The gates of Europe: a history of Ukraine
Week 45 (15)

Povstenko, Oleksa
The Cathedral of St. Sophia in Kiev
947 K.Kie