In June 1957, the British government tasked a committee, led by Sir Henry Hinchliffe, to investigate rising pharmaceutical expenditure following the introduction of the NHS. The report was published in 1959. This November, the Health Economics Research Centre (HERC), part of the Nuffield Department of Population Health (NDPH) at the University of Oxford, is organising a symposium to mark the 60th anniversary of the report’s publication.

The report made various landmark recommendations including:

Sixty years on, what has changed? Do we face similar challenges today? How have we been able to address these challenges? What long-term recommendations to address the current challenges could be made to the government today?

The symposium will discuss these and other questions, with confirmed speakers from the Institute for Fiscal Studies, NHS England, the Office for Health Economics, and the Universities of Oxford, London, Bournemouth and York.

Plus ça change: pharmaceutical spending in the NHS

Dr Claire Blacklock will cycle between the Oxford Healthcare Libraries on 24 May to raise awareness of lack of up-to-date information for medical staff to provide high quality care to patients, and gather funding to build a resource centre at the Makeni Government Hospital in Sierra Leone.
Read more about her challenge in the Oxford Mail:
https://www.oxfordmail.co.uk/news/17593680.co-founder-of-african-hospital-libraries-to-help-people-get-better-access-to-medical-books-in-sierra-leone/.
Claire’s fundraising link for the event is at https://mydonate.bt.com/fundraisers/claireblacklock1.
Claire will visit the libraries listed below for 10 to 15 minutes. Please join us at your closest library ready to welcome and cheer Claire – the more, the merrier! And if you are a cyclist, put your helmet on to demonstrate your support.
Claire’s estimated schedule: 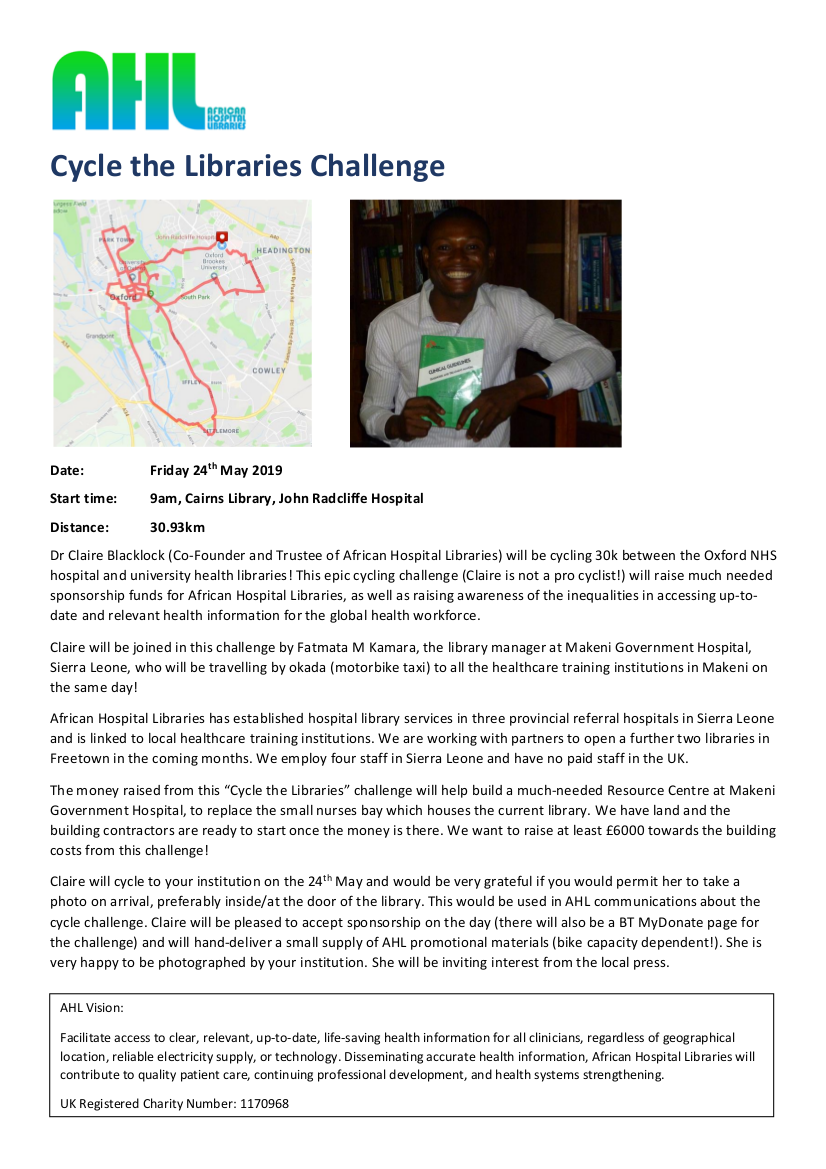 Welcome! This is the home of news from the Radcliffe Science Library, the Alexander Library of Ornithology and the Sherardian Library of Plant Taxonomy.