Exhibitions and Events in Oxford and the UK

A Reformation Trail guides you around points of interest in Oxford

Call for Readers for 500 Years of Christian Freedom 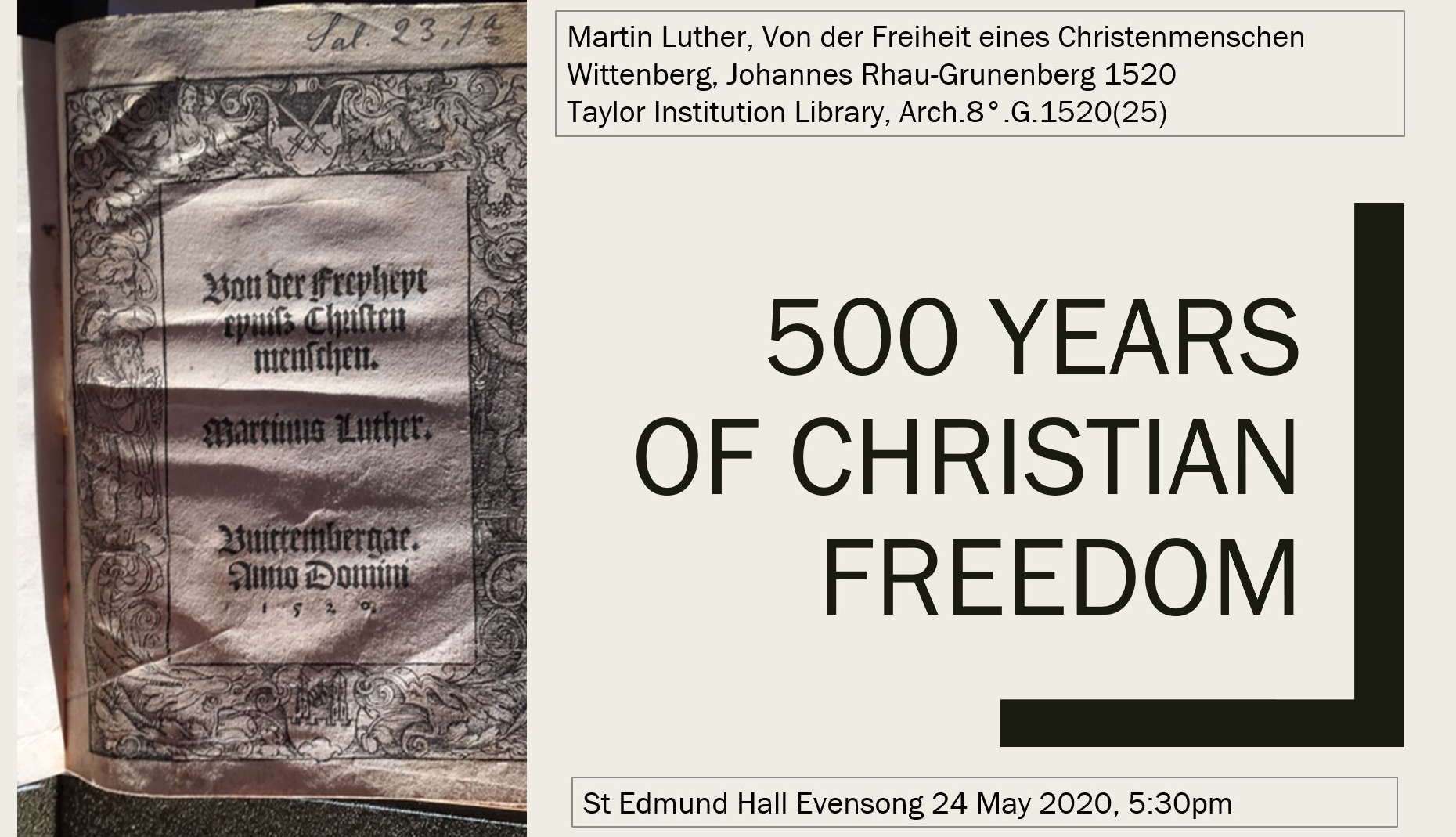 In November 1520, Martin Luther published his pamphlet “On Christian Freedom” (Von der Freiheit eines Christenmenschen / De libertate christiana) which became the best-selling book of the 16th century. The online event celebrates the 500th anniversary of the publication by launching a new online edition and translation of the pamphlet, taking the publicity success to the 21st century. The edition is based on the four copies of the text (three in German, one in Latin) in the Taylor Institution Library and is published on the Taylor Editions website and as print-on-demand.

As with the previous Taylor Reformation Pamphlets, the launch will include a full relay reading of the original text with English subtitles. For this we are looking for German speakers (native and non-native) who would like to read out a short section of the pamphlet which is structured in 30 paragraphs– full induction into early modern German pronunciation is provided! Watch the podcast of the “Sendbrief vom Dolmetschen” and read the introduction into early modern German on the website. Please contact Henrike Lähnemann if you are interested in participating – former readers have included the Mayor of Bonn, Oxford school children, emeritus professors, linguistics students, Dutch native speakers, members of the German Lutheran Church and many more.

Schedule of the Presentation 5-6:30pm

5pm The Oxford Copies of the Freiheitsschrift

1.    Welcome to the Event (Henrike Lähnemann)

3.    The History of the Prints (Maximilian Krümpelmann)

5:15pm The Edition of the Freiheitsschrift

1.    The Theological and Philosophical Background (Dennis and Hannah Clemens)

For more medieval matters from Oxford, have a look at the website of the Oxford Medieval Studies TORCH Programme and the OMS blog! For further information on the Reformation Pamphlets, consult the Taylor Editions site.

500 years of Reformation A post from Susan Reed at the British Library introducing the Reformation and describing key items from the current free display in the Treasures Gallery at the BL.

The Texts of the Reformation: St John's College Library. A post exploring the college's holdings, which are influenced by its Catholic heritage.

Luther the Translator A post from Susan Reed at the British Library exploring Luther's Bible translations.

Martin Luther in Oxford
An exploration of Luther's texts held in Oxford's Libraries by Charlotte Hartmann.