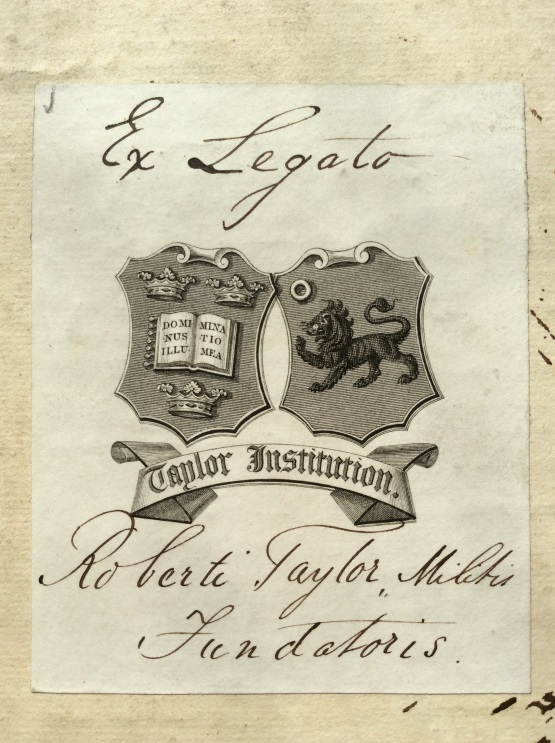 Most readers at the Taylor Institution Library, where the study of Modern European Literatures and Languages began in Oxford, are unaware that they owe the founding of their discipline at the University, as well as that discipline’s Library and the beginnings of its extensive research resources, to a prominent 18th century architect. Still less do they realise that this architect’s own library has survived, and that it is housed in the very building that bears his name: Sir Robert Taylor (1714-1788).

Similarly, many an architectural historian – with the notable exception of Sir Howard Colvin (1919-2007), in A biographical dictionary of British architects, 1600-1840 – has been unaware of the survival of Sir Robert’s library in Oxford. Indeed, one recent viewer of the collection surmised that the collection’s generally good state of preservation might have been due to its negligible exposure. It seems likely that, up to 2014, the 300th anniversary of Taylor’s birth, his books had seldom been consulted since (and possibly before) their presumed arrival at the newly built Taylorian in the mid-19th century. Walter Benjamin described unpacking his books after two years of darkness; the darkness that befell Sir Robert Taylor’s books lasted around two centuries. Clearly, in 2014 it was time for the collection to receive greater attention. In Sir Robert’s anniversary year, therefore, a selection of works from his collection was shown in a temporary exhibition organised and discussed by architectural historian Dr. Matthew Walker. (For podcast, click here [takes several seconds to load].) 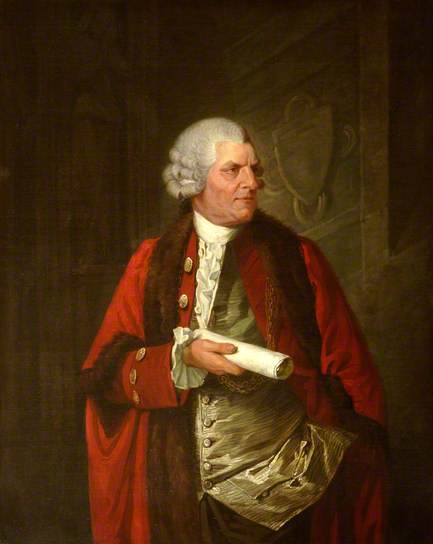 ir Robert Taylor (1714-1788), architect of the Bank of England as well as designer of many fine town and country houses, died a very rich man, leaving some £180,000 of which £65,000 was ultimately allocated to the University of Oxford “for erecting a proper Edifice … for establishing a Foundation for the teaching & improving the European Languages”.

A legal dispute regarding this bequest delayed the foundation of the Taylor Institution and ensured that its building was completed, by C.R. Cockerell (born the year of Taylor’s death — 1788-1863), only in 1844. The Library opened early in 1849. 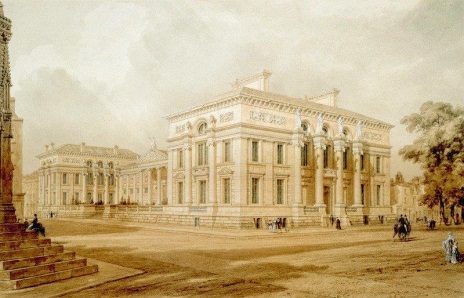 Sir Robert’s decision to bequeath such a large sum to establish a centre for the study and teaching of European languages has never been satisfactorily explained but it seems likely that he was influenced by his journey to Rome in 1742. There, and en route to that city, he would have needed to negotiate the various languages spoken and read by the many artists, architects, patrons and others he encountered. Certainly, the books Taylor owned were not just in English.

It is not known whether Taylor acquired his foreign language books (mostly in French or Italian, with a few in German or Latin) while travelling or, rather, acquired them after he had established his architectural practice in London. With some notable exceptions, his library (comprising some 70 volumes) is a typical example of a mid-18th century English architect’s library representing, like its owner, the transition from Palladianism to Neo-Classicism. The earliest work in the collection is an Italian Renaissance architectural treatise (Scamozzi 1615 [see image below]) by the architect who completed a number of Andrea Palladio’s unfinished projects.

Fairly standard works in Taylor’s collection include those on Classical architecture (Vitruvius, trans. Perrault 1673 [see image above]; Stuart & Revett 1762 [see images above and below); on Italian Renaissance architecture (e.g. Palladio, translated by Isaac Ware 1738 [not illustrated: Shelfmark ARCH.TAY.35]); and on 17th and 18th century English architecture (e.g. Isaac Ware, The Designs of Inigo Jones and Others (London, 1735) [not illustrated: Shelfmark ARCH.TAY.70]), including the only text to include a design of Taylor’s (Campbell 1715-1725 [see image below]). 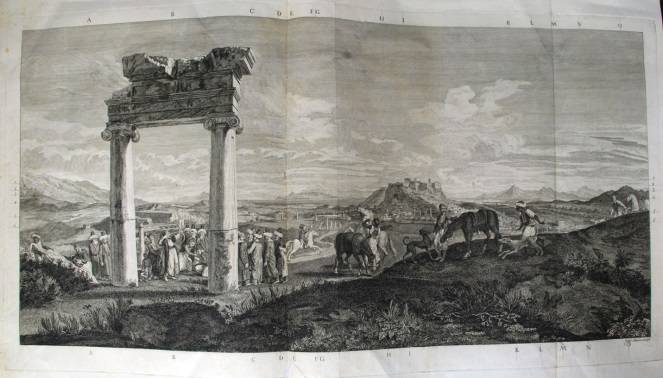 Above: James Stuart and Nicholas Revett, The Antiquities of Athens, Measured and Delineated, Vol. 1 (London, 1762) [Shelfmark ARCH.TAY.68] (One of the large format, fold-out pages)

Yet the collection also contains some publications that would have been slightly less representative of the typical 18th century architect’s library. Most notable is the magnificent, large format 17 volume set, in remarkably good condition, of works by the Italian architect and printmaker, Giovanni Battista Piranesi (1720-1778). The set includes his Le Antichità Romane (1756 [see image below]) as well as the compelling Carceri d’invenzione (begun 1745, first published 1750 [see image below]). 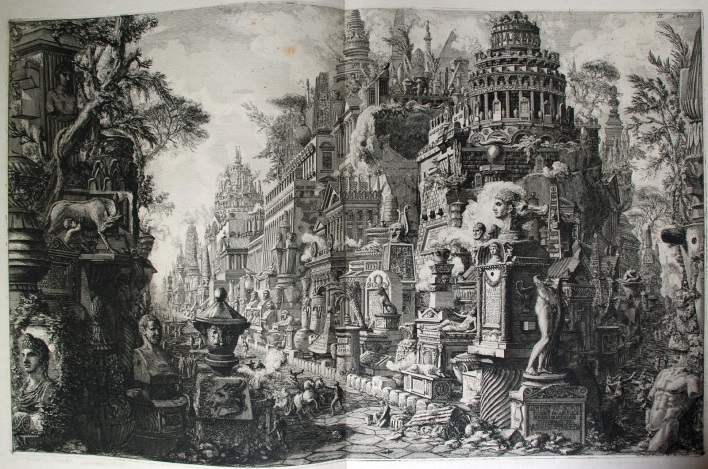 Ostensibly antiquarian explorations of Rome’s classical remains, Piranesi’s images are not based on the faithful observation and precise measurements found in other such studies (e.g. Desgodetz 1682 [see image below]). 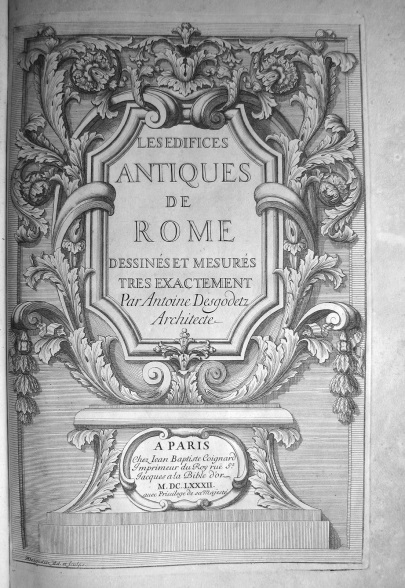 Rather, they are almost an anticipation of the Romantic, Gothic or even Post-Modern imagination, showing dramatic, sometimes disturbing scenes comprising heavily overgrown ruins; or gigantic subterranean vaults dominating tiny human figures, with terrifying machines and staircases leading nowhere. While Piranesi was extensively collected by the English, including architects, Taylor’s library shows his predilection for this artist-architect.

The history of the collection between Sir Robert’s death and the opening of the Taylor Institution Library 61 years later remains unclear. One book in the collection – the 3rd edition of William Chambers’ A treatise on the decorative part of civil architecture (London, 1791 [not illustated: Shelfmark ARCH.TAY.14]) – was published three years after he died and it’s possible that his son, Michael Angelo (1757-1834), acquired it; certainly, its presence indicates that some attention continued to be paid to the collection. Sir Robert seems not to have had his own bookplate and the only evidence of the collection’s origin is an early Taylor Institution Library bookplate, “Ex legato Roberti Taylor, Militis, Fundatoris”, added to each volume.

It’s also clear that the architect’s entire collection did not survive 100% intact. In terms of his book collection, the library of his near contemporary, the architect Sir William Chambers (1723-1796), comprised 140 items, twice the size of Sir Robert’s collection as it arrived at the Taylorian. More indicative of the collections’ limited survival is the fact that very few of Taylor’s own designs survived, and none of the three volumes now at the Taylorian that do contain designs includes architectural plans or elevations in his hand.

The Taylorian possesses one small volume comprising decorative designs, some hand coloured, of rococo chimney pieces (in rather poor condition); one very large volume of mounted drawings, most of them for funerary monuments and not necessarily in Taylor’s hand or of works by him; and one manuscript “textbook” on geometry, “mensuration” and perspective.

“The European languages”: a selection of books from the Taylor Institution in commemoration of the death of Sir Robert Taylor, 27 September 1788 (Oxford, 1988) [Taylorian: Shelfmark TAY.3.D]

D. J. Gilson, Books from the library of Sir Robert Taylor in the Library of the Taylor Institution, Oxford : a checklist by David Gilson (Oxford, 1973) [Taylorian: Shelfmark TAY.3.C]