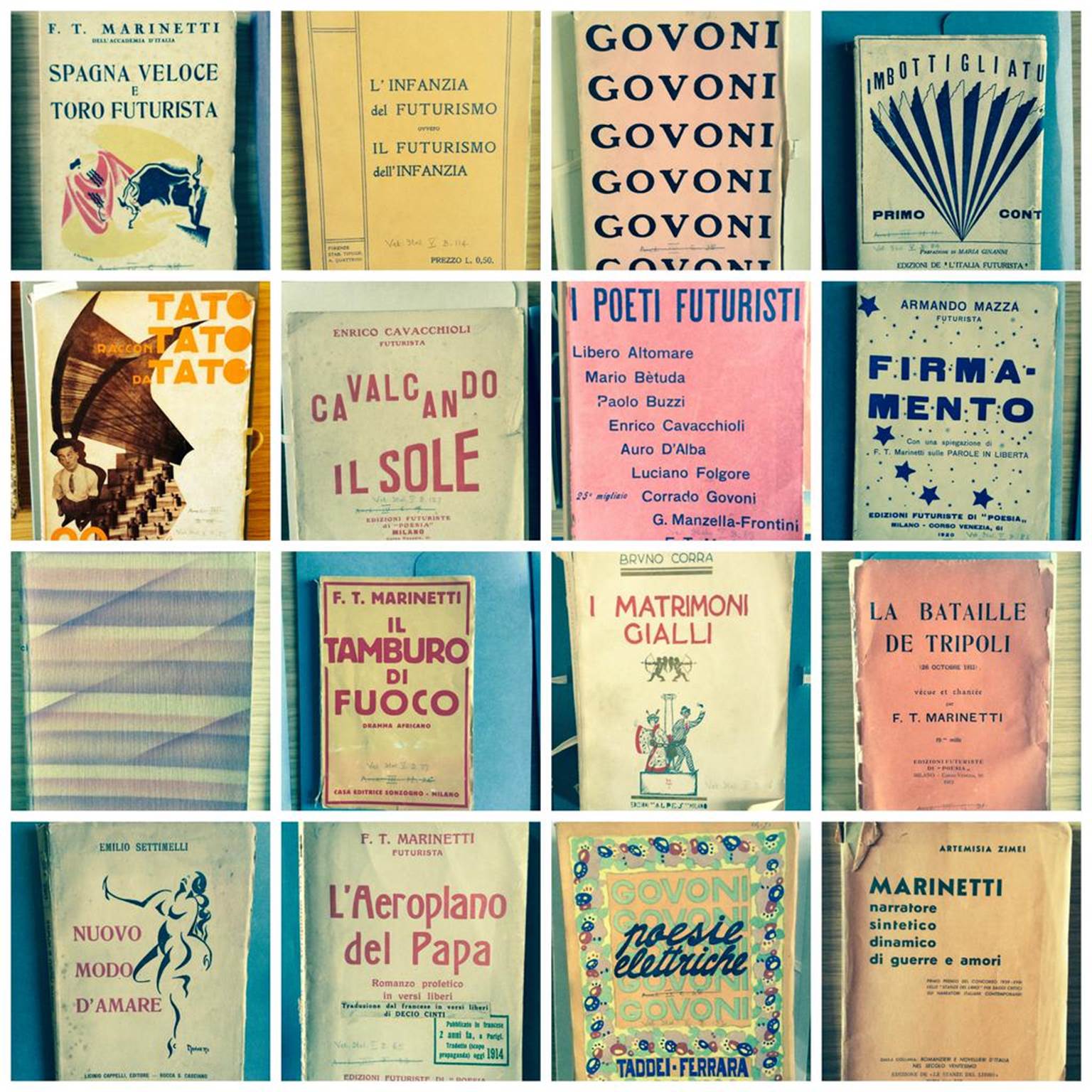 Just over a hundred years ago (26 April 1915), Italy signed a secret treaty, the Patto di Londra (the London Pact, also called the Treaty of London). This backroom deal committed the young Italian nation to switch alliances and declare war on its former ‘friends’, the Austro-Hungarian Empire and Germany – a major shift since Italy had been allied with these central powers since 1882. The result was that, more than half a year after the Great War began and following months of high-stakes diplomatic bargaining, Italy entered the fray alongside a group of new allies from the Triple Entente, including Britain, France, and Russia. This about-face in foreign policy might seem surprising, but it was rooted in longstanding Italian nationalist sentiments brought to a boiling point by a deliberate campaign of popular cultural provocation. While many contributed to this campaign, none did so in a more brazen and non-traditional way than the Italian Futurists.

In a book display and lecture held on 29 April 2015 at the Taylor Institution, we had a chance to unearth the library’s collection of rare, original Futurist materials. These works of innovative written and visual form offer an unusual insight into the cultural politics of an avant-garde artistic movement dedicated to fostering renewal but also violence, struggle, and war.

‘There is no longer any beauty except the struggle. Any work of art that lacks a sense of aggression can never be a masterpiece. […]/ We wish to glorify war— the sole cleanser of the world […].’[ii] 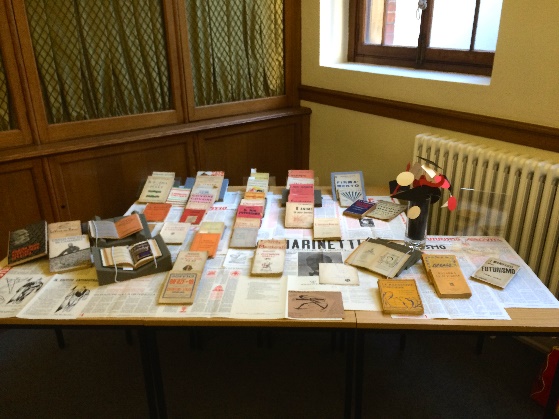 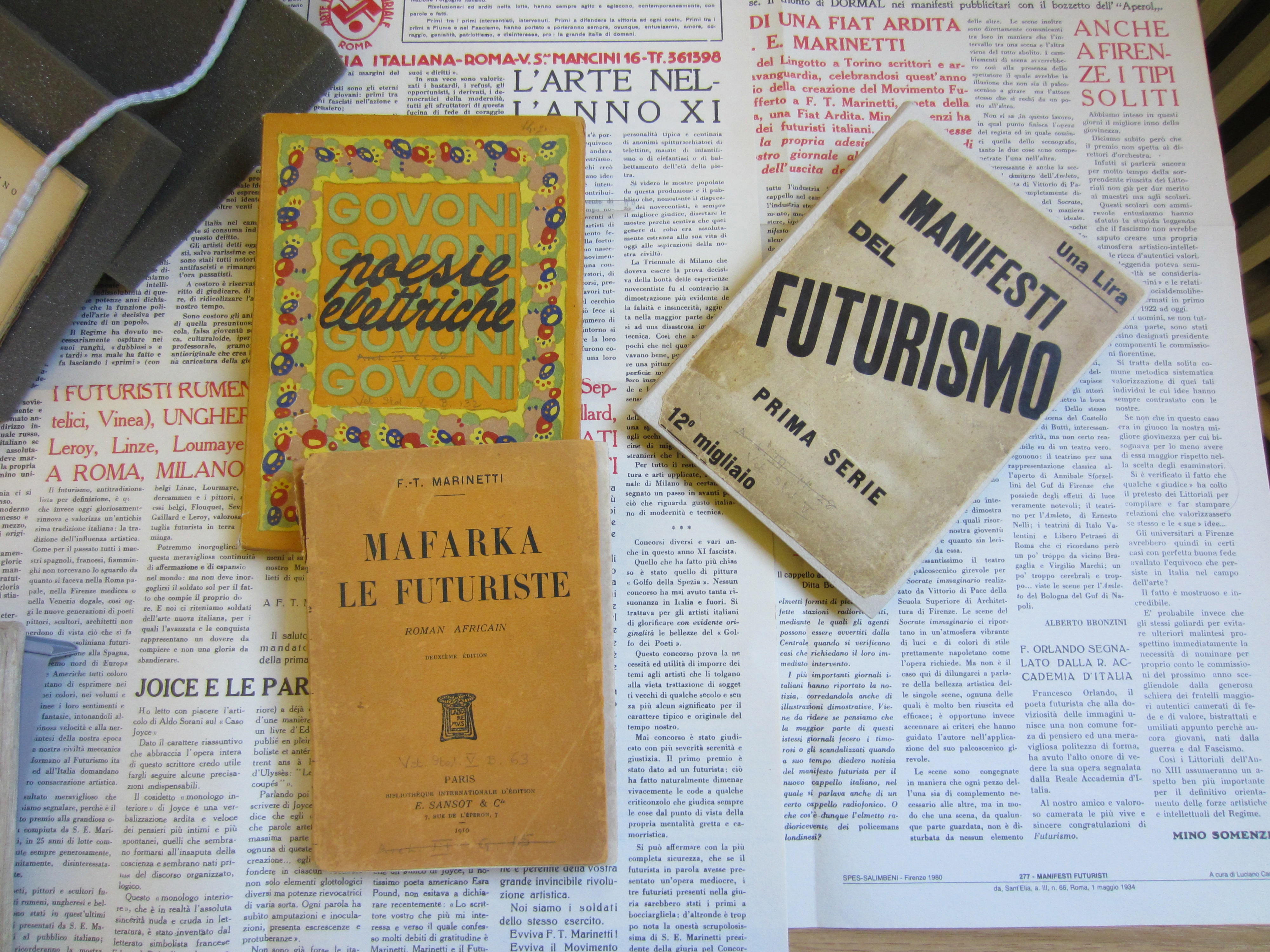 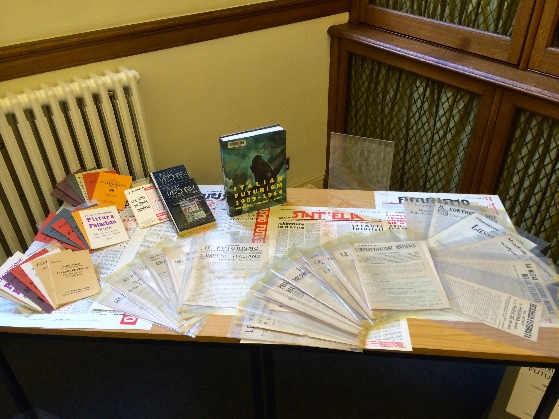 3 Display of Futurist manifestos, books and other sources on the Futurist movement (Photo Credit: Oliver Johnston-Watt)

Understanding the Futurists use of art to pursue their political activism requires thinking more about the movement itself. The Futurists were a group of radical innovators in multiple artistic media, but they all shared an association with one key figure, the poet Filippo Tommaso Marinetti (1876-1944). He was a French-trained former Symbolist who, in 1909, determined to launch art in a new direction. ‘With this aim in mind,’ he wrote in one manifesto (the preferred genre of the movement), ‘we have taken upon ourselves the propaganda of courage against cowardice of epidemic proportions, the creation of an artificial optimism against a chronic pessimism.’[iii] His idea was to transform Italian society – its culture, its politics, and its national character – renewing it for the modern world. He and his Futurist collaborators envisioned a new Italy that would be industrialized, technologically-enhanced, and internationally aggressive.

These aims make it clear that the Futurists fit squarely in the category that one prominent historian, Emilio Gentile, has dubbed ‘modernist nationalism.’[iv] The Futurists sought to unify a love of modern technology (automobiles, airplanes, electric power plants, bombs…) with a project of national spiritual revival. The result was an aesthetic of energy, dynamism, movement, multiplicity, and an obsession with war. This project was realised not just in writing but across media, from the theatre, visual arts, and film to unexpected areas like fashion design.

The Futurists’ nationalism encompassed two main military projects: war against Austria-Hungary and colonial expansion in Africa. The former was a project shared widely by a group called the Irredentists. Italian irredentismo was the belief, prominent from the time of the unification movement (the Risorgimento of the 1850s and 60s), that certain lands were truly ‘Italian’ (ethnically, linguistically, culturally) but had never been integrated into the nation. Reclaiming these territories required launching a war against the Austro-Hungarian Empire: ‘And even when classical irredentism seemed exhausted and dormant among the Italian people, we Futurists took steps to stimulate and reinforce that national sentiment, supported by those just aspirations that are generally recognized today.’[v] 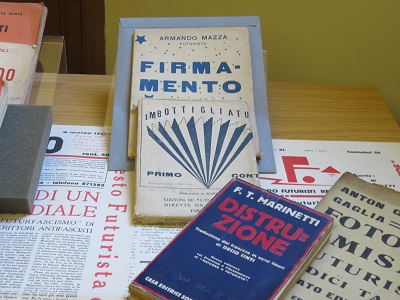 The second project, African colonialism, was likewise rooted in late 19th century aspirations. Under the government of Francesco Crispi, Italy had established a colonial presence in East Africa (Eritrea) and fought a (failed) war to conquer Ethiopia. In the early 20th century, the Futurists were obsessed with the continuation of these projects. As early as 1909, Marinetti wrote, in French, a shocking novel set in an exoticised, Oriental Africa, Mafarka le futuriste (Mafarka the Futurist). In it, he imagines an Arab warlord who subdues four armies of black Africans, becoming ‘master of Africa’. The book’s overt racial stereotyping is shocking now, but what was shocking to its contemporary French audience were the prolonged, explicit depictions of violent rage (think Homer) together with pornographic descriptions of nude bodies, sex, and rape (think De Sade).

The book was banned in France, but the Futurists’ fantasy of African conquest (and their exoticised racial stereotyping) remained a consistent element of the movement.

This fantasy took on renewed life in their support of the effort to oust the Ottoman Empire from Libya. In 1911 and 1912, Italy fought and won a colonial war with this aim, and the Futurists were actively involved. Marinetti was a correspondent from the front lines, and his new style of poetry, the parole in libertà (free-word poems), was well-suited to the fervid recreations of Italian bellicosity that enchanted him from this colonial campaign. 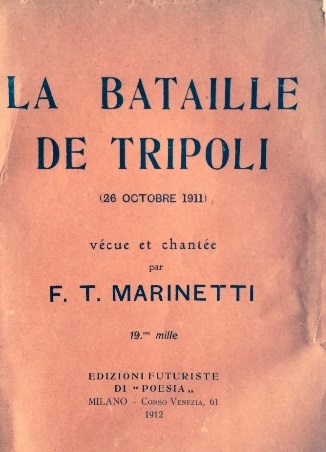 It is thus not as surprising as it might at first seem that the Futurists ultimately aligned themselves with Mussolini and the Fascist movement in the period following World War I. In 1919, Marinetti spoke alongside Mussolini at a gathering in Milan that marked the foundation of the Fasci di Combattimento. In 1929, he became a member of the newly-founded Accademia d’Italia – a complete about-face for the former radical who had espoused a hatred of professors and the ‘mummified’ past. This alignment with Fascism was well-suited to the political programme of the Futurist movement – its colonial, nationalist/patriotic, and interventionist tendencies. 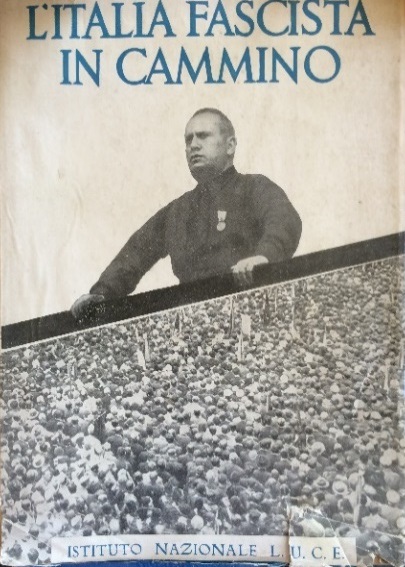 Both a radical avant-garde movement transforming art and an unsettling mix of proto-Fascist and Fascist nationalist ideologies, the Futurists may intrigue us precisely because of the problematic way that they move between artistic innovation and political extremism. It is this mix of forces that Walter Benjamin has famously analysed as typical of both the Futurists and fascism more broadly, their ‘aestheticization of politics.’[vi] 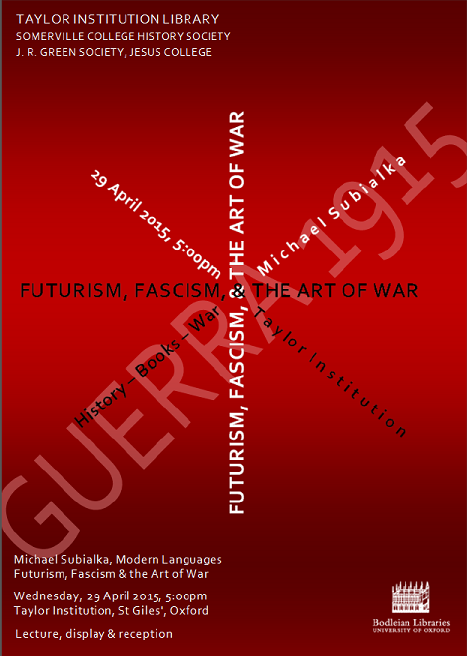