The Taylorian is known for its collections on Modern European Languages, be it East- or West-European. Apart from the main collections including German, French, Russian, Polish to  mention a few, the Taylorian also houses less well known collections on minority languages, such as Welsh and Breton within the Celtic section or Occitan and Yiddish. To familiarise a wider audience with these ‘hidden treasures’ of the Taylorian, the seminar series ‘Introducing Endangered Languages’ was organised in Michaelmas Term 2015. The seminars were kindly given by Oxford specialists.

Prof. Mary Dalrymple gave an introduction to language endangerment in the first seminar and paid special attention to a critically endangered language Dusner in West Papua with only three speakers left. Some of the questions she discussed were :

How many Languages are there? What constitutes a language?

The total number of languages in the world can only be estimated at around 7000. It is difficult to be certain, and it depends on what counts as a language. E.g. is Chinese one language or are Mandarin, Cantonese and other dialects regarded as separate languages?  And is Arabic one language or does Egyptian Arabic count as a separate language? Assuming Chinese is one language, than it is the most spoken language in the world with more than a billion speakers. Second comes Spanish, followed by English.  Here is a list of most spoken languages from the Ethnologue. 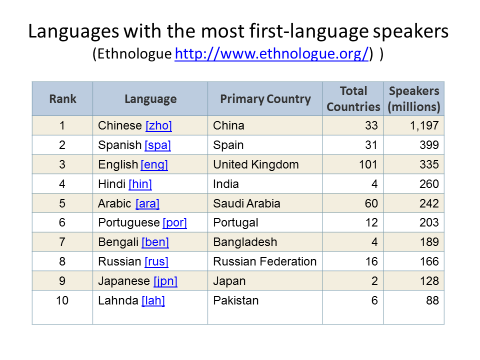 When is a language endangered? 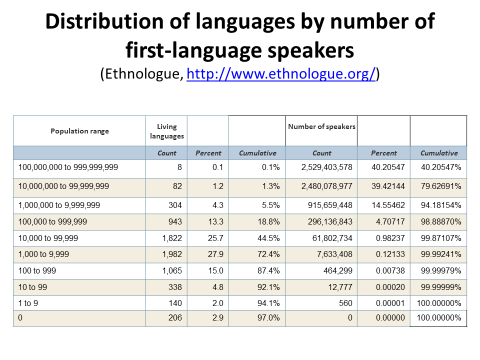 Most users of the Taylorian will have heard of European minority languages, such as Breton or Frisian, although languages like Friulian or Istro-Romanian are less well known. Most countries in Europe can be proud of having one or a few minority languages spoken within their borders. In terms of ‘language density’ however Europe is fairly ‘poor’, other regions in the world may have many more languages within one country. One of the most densely ‘languaged’ regions is South-East Asia. It is assumed that there are at least 1000 minority languages in Papua New Guinea alone, many of which have not even been documented. In the language-rich province of West-Papua in Indonesia there is a language on the brink of dying out: Dusner, an Austronesian language, only spoken by three people over 60. Fortunately, Prof. Dalrymple was just in time to meet them in April 2011. Flying out in a hurry to West-Papua after Dr Mofu had discovered Dusner, she then travelled to the idyllic village of Dusner that can only be reached by boat. 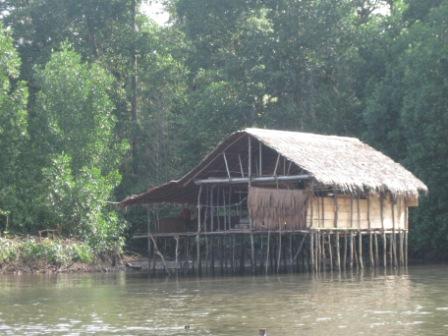 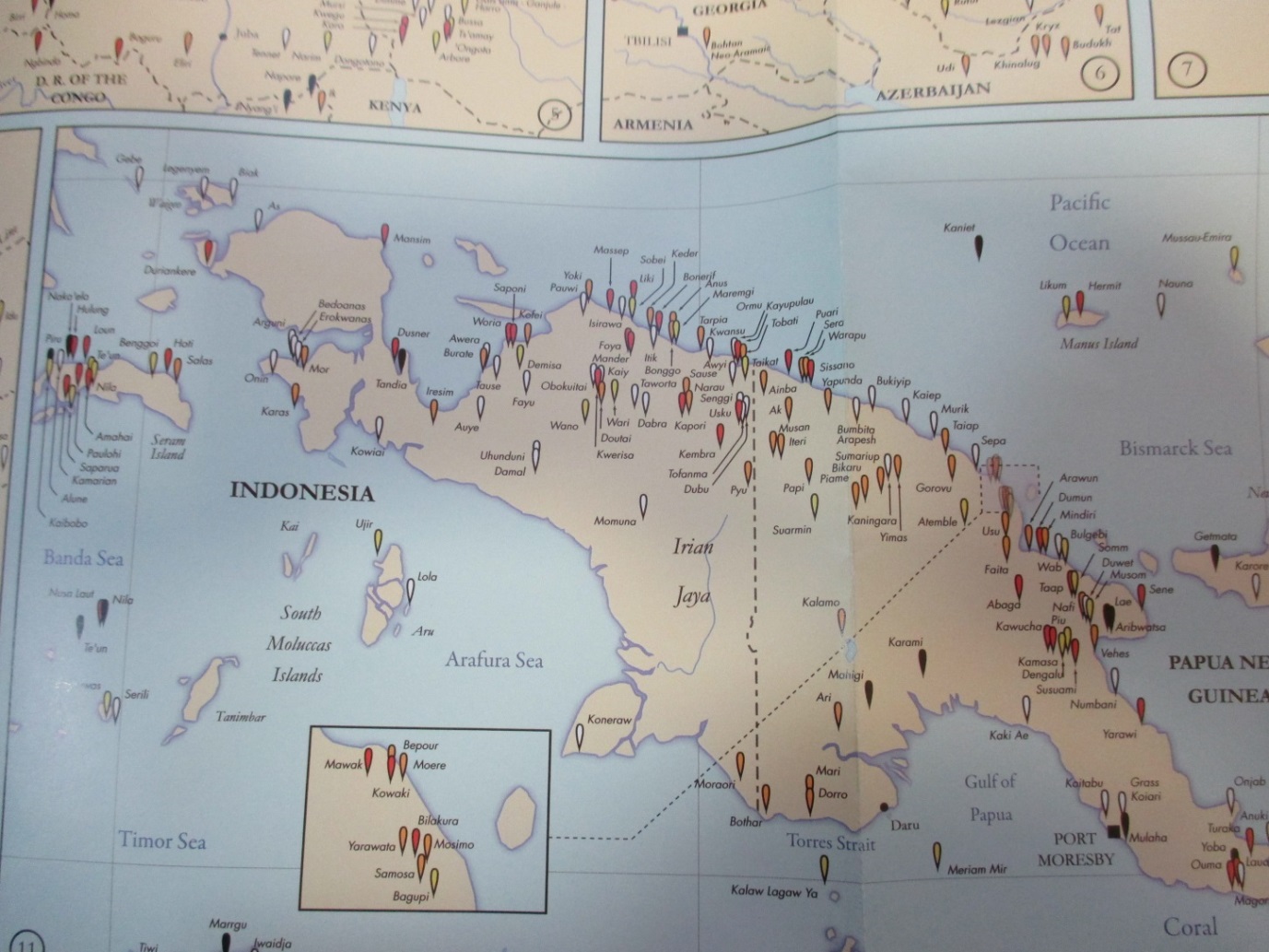 Together with Dr Mofu who holds a D.Phil. from Oxford, she interviewed these last speakers  to record their language. The Dusner speakers are featured below (from the project website http://dusner.clp.ox.ac.uk/). For those interested in the sound of Dusner, the website holds audio recordings of the interviews.

Name: Emma Somesa Age: 85 Current address: Dusner Village Emma is the oldest speaker of Dusner. She speaks Dusner and Wandamen fluently, and also speaks Indonesian. We communicate with her through interpreters who speak Indonesian and Wandamen.

Name: Enos Yoweni Age: 60 Current address: Sowiar Village, Simei Enos comes from Dusner and speaks 4 languages fluently: Kuri, Dusner, Wandamen and Indonesian. He is the head of Sowiar Village (a 3 hour walk from Dusner Village). There is no land transportation to his village.

These interviews were the basis of a language documentation project which resulted in the publication of the first grammar of Dusner  (by Mary Dalrymple & Suriel Mofu). 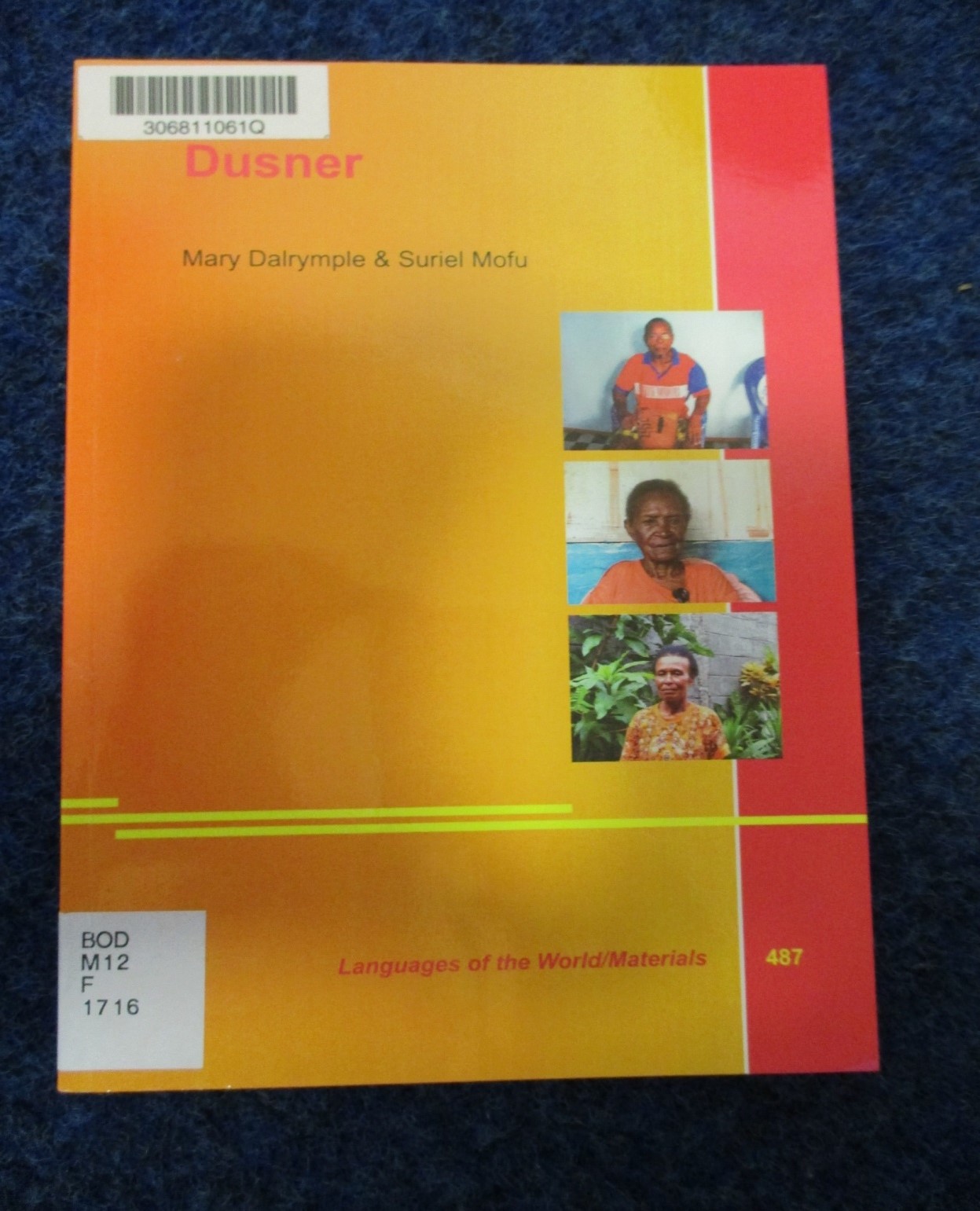 Small languages like Dusner are really valuable from a linguistic point of view, since they often maintain the more complex linguistic constructions, whereas major languages will have been simplified to make them easier to acquire by adults. English is an example of a language that simplified over time. For example In Anglosaxon there were different verbal endings as in helpe, hilpst, hilpƥ, helpaƥ, helpe, helpen (present tense of helpan ‘to help’) whereas in Modern English there are only two forms in the present: help, helps.

A remarkable feature of Dusner is the number system: it is a base five system, this means that there are separate words for one, two, three, four and five but six is expressed as ‘five one’ and seven as ‘five two’. Ten is a new word, eleven is ‘ten one’ and sixteen is expressed as ‘ten five one’. 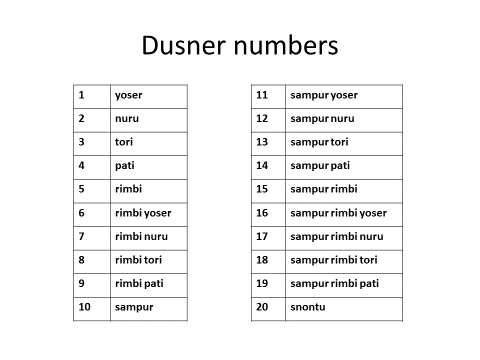 The grammar is the only one book on Dusner ever published and this is held in the Bodleian. The Taylorian holds a good collection on endangered languages more in general, the list of recommended resources can be found below.

I’m grateful to Prof. Dalrymple for letting me use her slides and for giving me permission to use the table of  Dusner numbers and the two tables on numbers of speakers, both based on information from Ethnologue.

The Endangered Languages Project. A project to support language preservation and documentation around the world by the Alliance for Linguistic Diversity.The catalogue contains information on 3228 languages. Includes interactive map. http://www.endangeredlanguages.com