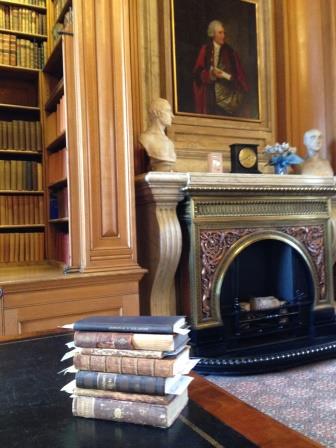 The Taylor Institution’s ‘Shakespeare in Translation’ exhibition illustrates the broad linguistic scope of Shakespeare reception across Europe. His plays have a particularly long history of adaptation and translation in German. This post explores some of the milestones in that history, from anonymous reinterpretation while Shakespeare was still writing, all the way to Brecht’s radio plays the twentieth century, via the authoritative Schlegel-Tieck edition of the early nineteenth century.

In 1586, the English comedians arrived in Germany, and continued to perform until 1660. It was they who provided Germany’s introduction to Shakespeare, during the playwright’s lifetime. Their repertoire included plays loosely based on Shakespeare’s – emphasis on the word ‘loosely’. The name ‘Shakespeare’, however, was not associated with these plays, and is generally thought not to have been mentioned in Germany until Daniel Georg Morhof’s Unterricht von der Teutschen Sprache und Poesie in 1682. Even if divorced from the name of Shakespeare, these plays do represent very early reception of his works in Germany. Some of the texts survive, both in fairly modern and near-contemporary editions, of which the oldest is Englische Comedien und Tragedien (1620). The eighth play in this collection is a German translation and adaptation of Titus Andronicus, making it the first of Shakespeare’s plays to be printed in Germany, as well as the first to be printed in England. Its temporal proximity to the earliest English performances of the play, as well as that fact of its being performed by English actors (some in English, and some in German), mean that we can learn a great deal about the history of Titus Andronicus and its original performance from this printing. 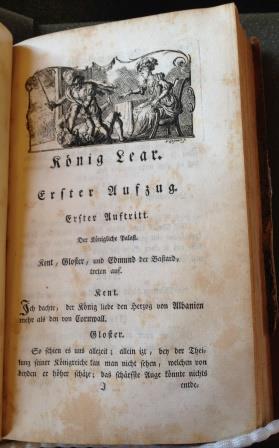 are’s popularity took off in Germany in the eighteenth century, when German commentaries on his work first began to appear. Although his name had been known in Germany since Morhof in 1682, and to French-reading audiences through Voltaire’s Lettres philosophiques sur les Anglais, the real development did not come for another eighty years, with Christoph Martin Wieland’s Shakespear: theatralische Werke (1762). Although Wieland did not translate all of the plays, English-language scholars of Shakespeare in Germany are united in their assessment of the significance of this publication:

Simon Williams: ‘It would be difficult to overstate the importance of Wieland’s translation in the introduction of Shakespeare into German’ (Williams, p. 52)

Roger Paulin: ‘no serious discussion of Shakespeare’s text could … be expected much   before 1762, the date of the first volume of Wieland’s translation’ (Paulin, p. 21)

Wieland’s work was neither definitive nor complete, and J.J. Eschenburg built upon it in the next decade with William Shakespear’s Schauspiele. Neue Ausgabe (1775-77, 1782). It was, though, the appearance of Schlegel’s translation (1797-1810) which irrevocably changed Germany’s relationship with Shakespeare. Schlegel’s work become the standard German Shakespeare translation, largely because of his famous principle ‘alles im Deutschen Thunliche’. Paulin summarises the impact of this approach, which:

‘means that Shakespeare can be both translatable and German … For Schlegel, poetic             rendition was an absolute requirement, not an option’ (Paulin, p. 303)

In the 1820s, Ludwig Tieck re-edited Schlegel’s translations to produce Shakespeare’s dramatische Werke. Uebersetzt von August Wilhelm von Schlegel, ergänzt und erläutert von Ludwig Tieck (1825-33). In the introduction, Tieck takes it upon himself to warn his readers against another set of translations which began appearing in the intervening

years between Schlegel’s original publication, and his own reissue: that of Johann Heinrich Voss and his sons, Shakespeare’s Schauspiele von Johann Heinrich Voß und dessen Söhnen Heinrich Voß und Abraham Voß (1818-1829). Schlegel was not himself involved in this new version and was furious, both at the reissue of his work, and at Tieck’s supposed improvements (Paulin, p. 344). The Schlegel-Tieck edition is viewed as a ‘German classic in its own right’ (Korte and Spittel, p. 269), and Friedrich Gundolf viewed Schlegel’s work as the endpoint and the high-point of a development of Shakespeare as belonging to the German spirit, which had begun with Lessing (Gundolf, p. 356). But it was also a question of timing. George Steiner describes Schlegel’s translations as ‘formidable re-creations of the English text [which] coincided precisely with the time in which the German language was coming of literary age’ (Steiner, p. 156).

The Schlegel-Tieck edition, however seminal, did not put an end to the translation of Shakespeare into German. Paulin identifies the translations by Ernst Ortlieb (W. Shakespeare’s dramatische Werke (1842-43)) and Friedrich Bodenstedt (William Shakespeare’s Dramatische Werke (1867-71) as having been undervalued (Paulin, pp. 331, 329), and indeed they have received little modern critical attention. Moving into the twentieth century, Friedrich Gundolf’s enduring contribution to Shakespeare studies must be his Shakespeare und der deutsche Geist (1911), but a decade later he published Shakespeare in deutscher Sprache (1920-22). This, though, is ‘today only [of] antiquarian interest’ (Paulin, p. 488).

Where translations of individual works are concerned, we see some famous names, and some that are less familiar. The Taylor Institution holds several translations by the actor, theatre manager, and dramatist F.L. Schröder, including his Hamlet and König Lear (both editions 1778), as well as Gottfried August Burger’s Macbeth (1783). Schröder’s production of Hamlet had a particular influence on German literature, for it inspires the hero of Goethe’s Wilhem Meister’s Lehrjahre (himself named for Shakespeare) to want to put on a complete German version of the play. Hamlet, indeed, is discussed at length in the novel. Bürger, meanwhile, was Schlegel’s mentor, and although Schlegel had little complimentary to say about this version of Macbeth in later life, ‘it was Bürger who in 1789-93 was able to instil in the young Schlegel the confidence to produce a verse Midsummer Night’s Dream quite distinct from Wieland’s’ (Paulin, p. 311). Seventeen years later, Schiller also produced an adapted translation of Macbeth, and in 1812, Goethe, who as theatre director in Weimar produced a number of Shakespeare’s plays, put on his own adapted version of Romeo and Juliet, although thereafter he lost interest in translating Shakespeare. Moving forward over a century, we come to Bertolt Brecht, who used elements of many of Shakespeare’s plays in his writing, and whose free adaptations were tailored to his own critical and political purposes. In October 1927, his adaptation of Macbeth was performed on the Berliner Rundfunk radio station, but the manuscript is now lost. The same station also broadcast his Hamlet in 1931. Between 1951 and 1953 Brecht also produced a partial translation of Coriolanus. Although it remained unfinished, it was nonetheless translated back into English by Ralph Manheim.

Four hundred years after his death, Shakespeare’s popularity in Germany shows no sign of waning. He is perhaps as present in German schools as in English. Despite the great variety of interpretation made possible through the different acts of translation outlined above, however, the status of Schlegel’s achievement means that German has a standard version of Shakespeare which has something like the status which the original has in English. But while this post has focused on German translators of Shakespeare, they are only one aspect of German Shakespeare reception. Germany also has a long tradition of Shakespeare critics and commentators, some of whose names are well known, and some of whose stories have been almost forgotten.

One thought on “Playing Shakespeare in German”