The Evolution of Books of Hours Printed in France

Books of Hours originally evolved during the thirteenth century from Marian prayers added to Psalters, as Christopher de Hamel has pointed out.[1]  In Roger S. Wieck’s detailed survey of the content and illustrations of late medieval Books of Hours,[2] he remarks that:

The core of any Book of Hours, and the text after which it receives its name, is the series of prayers called the Hours of the Virgin […] This series of prayers is made up of eight Hours: Matins, Lauds, Prime, Terce, Sext, None, Vespers, and Compline. […] Ideally, these eight Hours were to be recited at seven different times throughout the course of the day.[3]

According to Wieck, as well as the Hours of the Virgin, Books of Hours usually contain a liturgical calendar, readings from the Gospels, other sets of Hours, additional prayers not grouped into Hours, the Seven Penitential Psalms, a Litany, and a service to pray for the souls of the dead.[4]  One especially famous medieval Book of Hours is the Très riches heures du duc de Berry – some of its miniatures are reproduced on Wikimedia Commons.

Early printed Books of Hours, too, have been the subject of some recent studies, particularly by Prof. Cristina Dondi.[5]  Although publications about individual editions exist, there is no systematic survey of the development of the Book of Hours as a genre after 1600.  Dondi notes the Council of Trent as a watershed in the development of the Book of Hours, after which it allegedly became a workaday textbook for religious instruction, though she calls this characterisation into question.[6]

This is where my project comes in.  I looked at four Books of Hours printed in France, which are now located in Oxford libraries: an example from around 1500 at Balliol College, one from the late seventeenth century at Keble College, one dated 1706 at the Taylorian, and one dated 1874 and also located at Keble.  Within each book, I listed exactly which sets of prayers and other texts it contains and looked at the text-image relationship.

I was able to compare what I found in the Balliol Book of Hours with the existing scholarship on the manuscript and incunable traditions.  Its content turned out to be typical.  The Balliol example is lavishly illustrated with woodcuts. 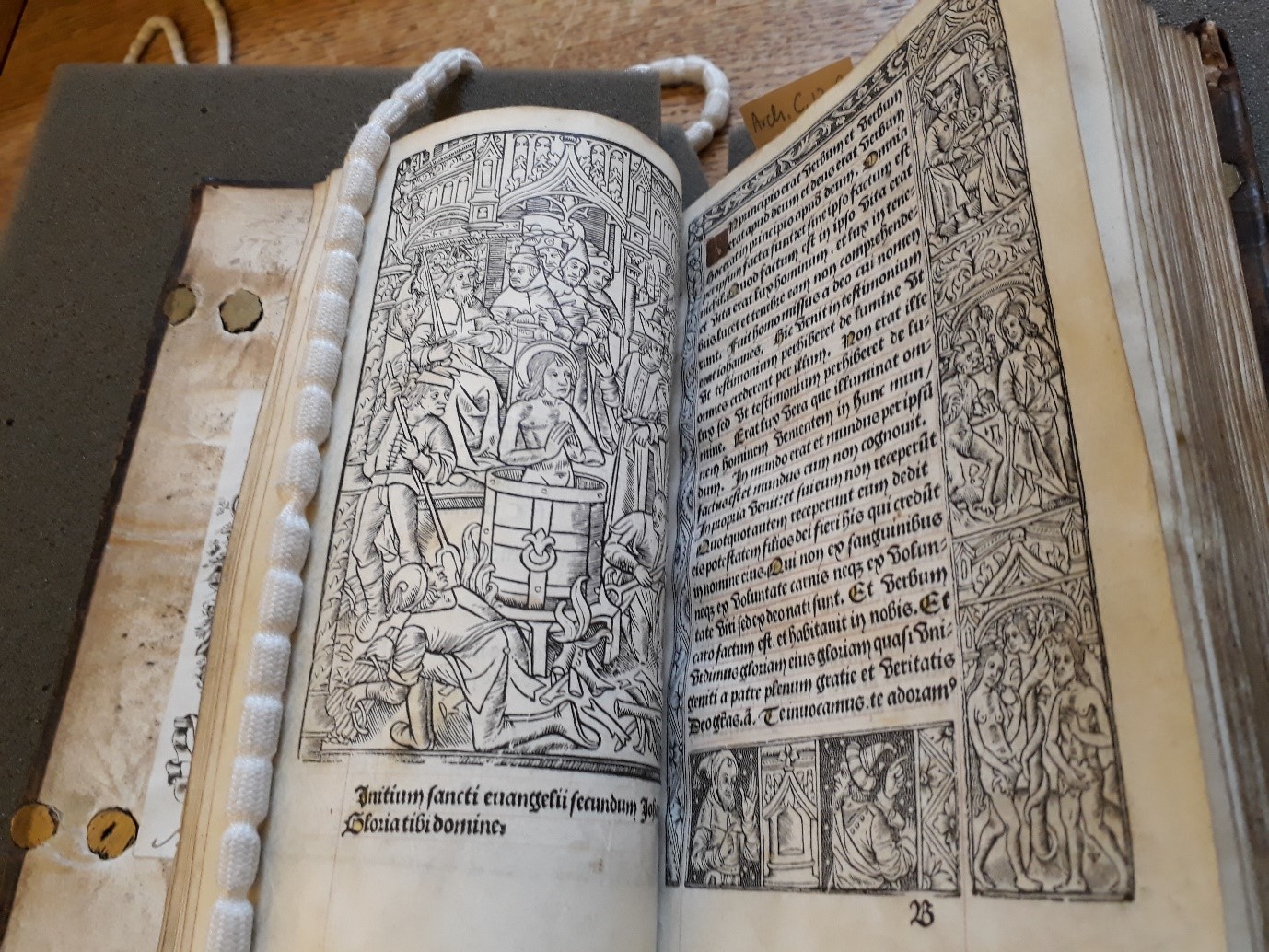 The borders on b1r (the right-hand page pictured above) are typical of the arrangement throughout the book: the outer borders depict Biblical scenes, which are not always directly relevant to the text.  The central image in the right-hand border depicts the Devil tempting Christ and the image below it shows Adam and Eve beside the Tree of the Knowledge of Good and Evil – complete with serpent – in the Garden of Eden.  Eve is examining the fruit.  Since the adjacent text is the opening of St. John’s Gospel, which is read at Christmas as it forms the basis for the theology of the Incarnation, a depiction of the Nativity might have been more relevant.  The two figures in the border at the foot of the page seem to be discussing something: perhaps the man on the right is pointing to the picture of Adam and Eve.

However, the large illustration on the facing page is relevant, since it depicts an episode from the life of St. John the Evangelist, traditionally thought to be the author of the text.  The episode is mentioned in the Encyclopedia of the Middle Ages article on the saint: he is being boiled alive in oil on the orders of the Emperor Domitian, an ordeal which he was said to have survived.[7]  The saint’s hands are in a gesture of prayer as he stands in the cauldron.  Servants stoke the fire under him while Domitian – seated on the throne and robed as a medieval monarch – looks on, with his courtiers in the background.  An official on the right turns his head away to speak to someone.  According to Wieck, this episode is often depicted at this point in Books of Hours.[8]  The large-format illustrations found the start of each of the Hours of the Virgin also follow one of the schemes listed by Wieck.[9]

Interestingly, the order of the quires in the copy at Balliol[10] is different from the copy used by the compilers of the standard catalogue of incunabula (the Gesamtkatalog der Wiegendrucke – see the entry here).  This may be due to a mistake when the book was bound or rebound.

For the later books, the lack of existing scholarship meant that I had to rely almost entirely on my own observations, with the Balliol example as a point of comparison.  The following table summarises the content of each book (an x indicates that an element is present):

See also this data visualisation, below: 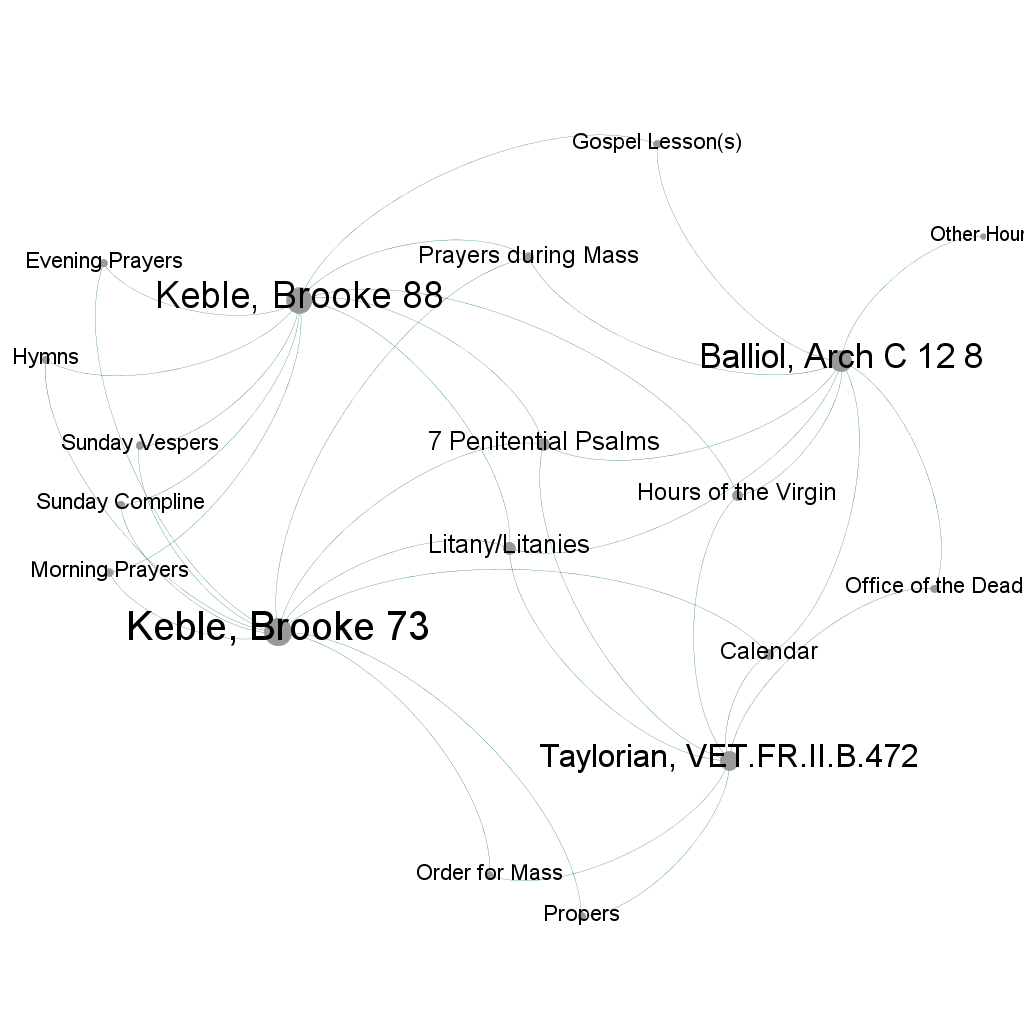 Each book’s content differs considerably, altering in response to its particular context: litanies (albeit of different kinds) and the Seven Penitential Psalms are the only texts that appear in all four books.  All the books contain a mixture of French and Latin texts.  French summaries and parallel text translations of Latin texts enabled comprehension (whether the Latin prayer was being used in public or in private), whilst French prayers did not pose such a language barrier.  The more modern the book in my sample, the greater the proportion that is devoted to helping the reader to take part in public worship.

Curiously, the 1874 Book of Hours at Keble does not include the Hours of the Virgin.  However, there are still grounds for seeing it as a later stage in the development of the same genre rather than as something altogether new: it self-designates as Heures and it contains many of the same texts as its early modern predecessors.  In fact, its use of images mimics medieval Books of Hours.  Stylistic echoes of books such as the Balliol example are evident at a glance and Wieck notes that images of King David (like the one pictured below) often open the Seven Penitential Psalms in late medieval Books of Hours.[11]  David, who was traditionally thought to have written the Psalms, kneels before God in a medieval-style interior.  His clothes are also late medieval in style and his harp is by his right knee.  The border of the facing page is floral, like the upper border in the Balliol example. 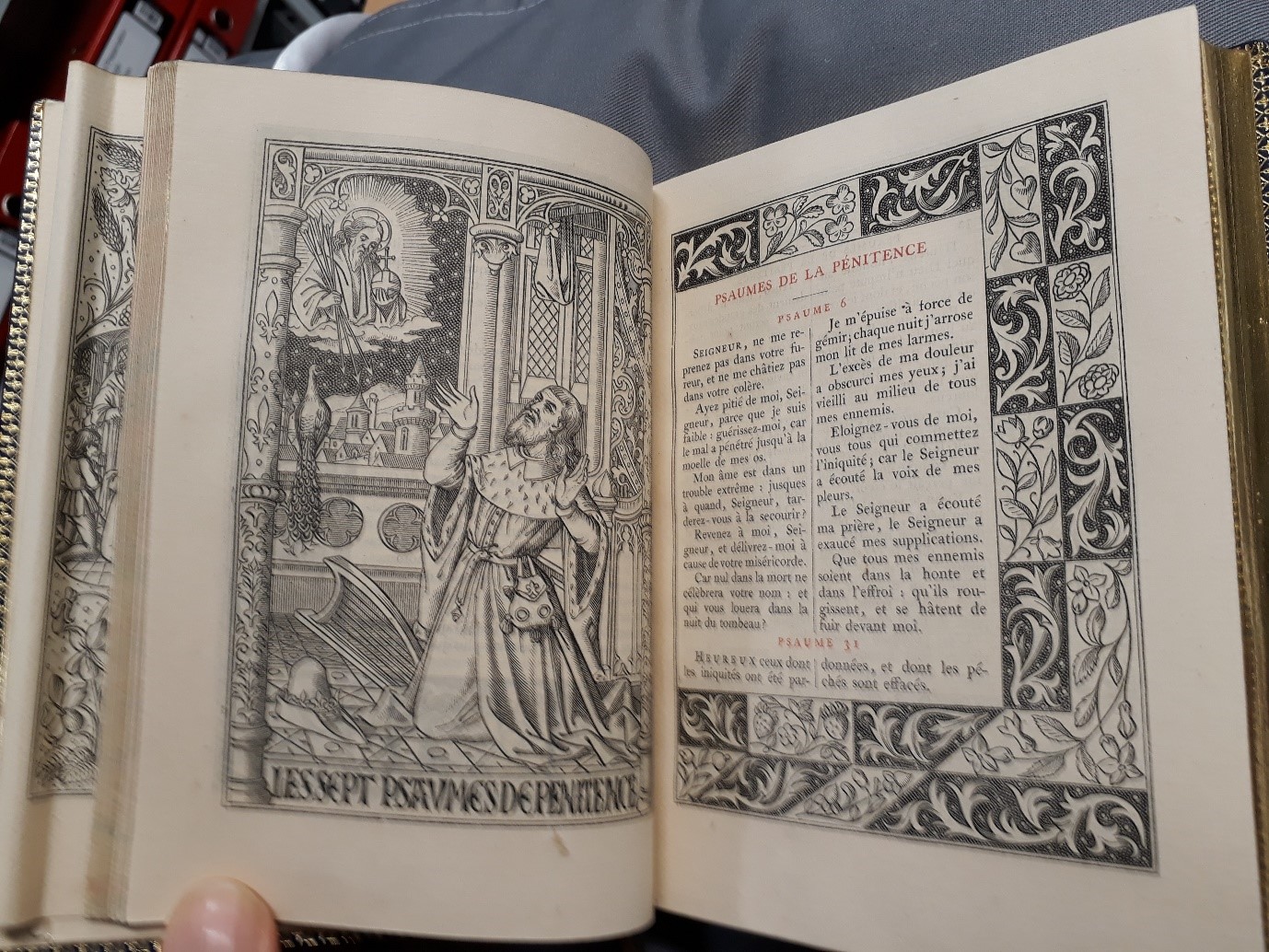 The relationship between text and image varies from book to book.  Illustration with relevant images such as the one pictured above occurs throughout the nineteenth-century book, whilst decoration seems to be the main priority in Keble’s seventeenth-century book, Prieres du matin, (pictured below).  Indeed, the entire book is a thing of beauty; even the text is engraved.[12]  The shallow, rectangular indentations in each page show that copper plates were used throughout. 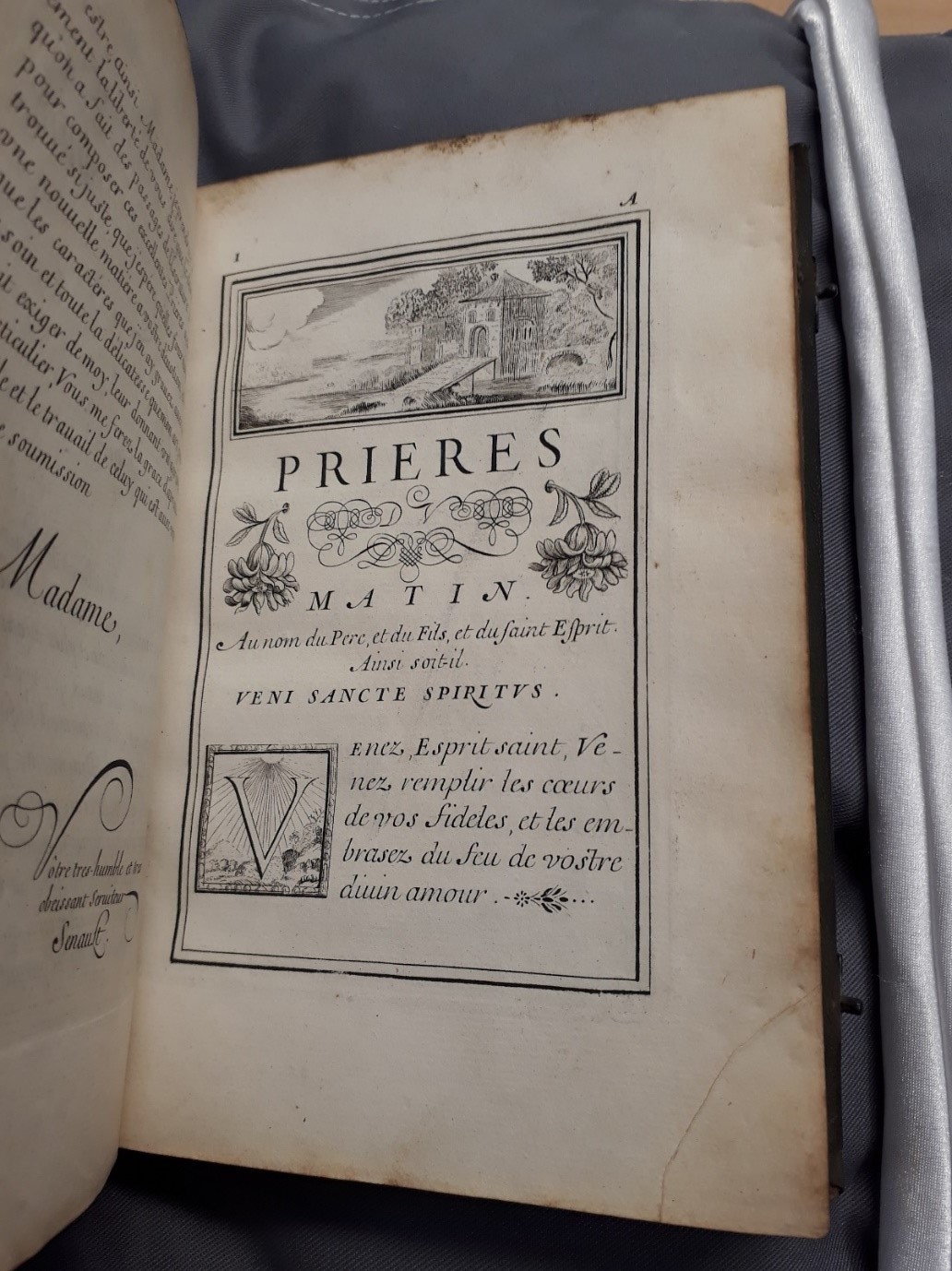 The word du in the middle of the page is highly ornamented and flanked by bunches of flowers.  These fit in well with the bucolic scenes at the top of the page and around the initial ‘V’: the former shows the gateway to a castle, flanked by trees, with a bridge across its moat, whilst the latter depicts the sun shining down on some hills, which are dotted with trees.  Perhaps we are looking east and the sun has just risen, providing an appropriate image for Morning Prayer.  Similar decorations occur throughout the book, but some of them have definite religious content which is relevant to the text, such as a depiction of the Descent of the Holy Spirit at the start of the Pentecost hymn (Veni creator Spiritus) on p. 238.

The eighteenth-century Book of Hours at the Taylor Institution Library has been scanned into a PDF file and can be viewed online here.  It was produced for the convent at St-Cyr and contains a good deal of material that is specific to this setting: there are ceremonies for visitation by a bishop, the appointing of a new Superior, etc.  (Things have moved on from the Middle Ages, when, according to Wieck, Books of Hours were produced exclusively with the laity in mind.)[13]  Almost the entire book is in Latin-French parallel text (starting with the Hail Mary on p.1, i.e. p. 22 of the PDF) which could have helped members of the convent whose Latin was not especially good, but who could read French, to participate in the services.

This book probably has the most interesting text-image relationship out of the four books that I investigated.  There are several ornaments within the text block: many of these are baskets of flowers.  However, at some time, someone has inserted eight separately printed images, each of which (with the possible exception of the one facing p. 307) is relevant to the text that it faces:

Looking closely at the captions of some of these engravings reveals that they came from different print shops.  The pieces of paper to which they are glued are also of different shapes and sizes (though this is not easy to see in the PDF).  In addition, a piece of printed ephemera – a small piece of paper detailing a three-way compact in honour of the Holy Trinity – has been bound in immediately before the engraving of the Holy Trinity.  (They’re pages 230 and 233 of the Taylorian PDF.)  It seems that somebody has personalised the book by adding these fragments, as well as a manuscript litany at the back of the book (pp. 514-517 of the PDF), but when this was done is not clear.

I found this project particularly exciting because, in the case of the three post-1600 books, I was sailing into virtually uncharted waters and I hope that the description of three “locations” in those seas that I have written – with the description of the earlier book and its context as a guide – will go some way to showing that the ocean of post-1600 Books of Hours is worth mapping out in full.

[5] Dondi, Cristina. (2016). Printed Books of Hours from Fifteenth-Century Italy: The Texts, the Books, and the Survival of a Long-Lasting Genre. Florence: Leo S. Olschki.

Dondi, Cristina. (2016). Printed Books of Hours from Fifteenth-Century Italy: The Texts, the Books, and the Survival of a Long-Lasting Genre. Florence: Leo S. Olschki.

Rhodes, Dennis E. (1982). A Catalogue of Incunabula in All the Libraries of Oxford University Outside the Bodleian. Oxford: Clarendon Press.