If you may not know already, the Taylor Institution Library houses a vast array of collections on Modern Languages and Literatures. We also house some amazing special collections. Including a lock of Goethe’s hair! The hair even has its own shelfmark: MS.8º.G.26. The shelfmark denotes the item as an octavo. Professor Henrike Lähnemann of the University’s Faculty of Medieval and Modern Languages finds this amusing. This is because octavo refers to the size of the original German paper slip holding the hair. Lähnemann has said that the slip is like a secular counterpart to the authentication papers which comes with a saint’s relics. In the Middle Ages, they were called cedulae, where the name of the saint was noted and then tied to the relic. This placement of slip and hair in a small envelope appears to indicate the treatment of Goethe’s hair as if it were the relic of a saint. Today, Goethe’s hair continues to fascinate visitors of the library. The hair is displayed in a frame alongside a pressed violet and a portrait of Goethe, with the German paper slip and a little, ‘English’ envelope. Why does the Taylor have such a mysterious artefact, and how did the library even obtain it in the first place? All will be revealed… 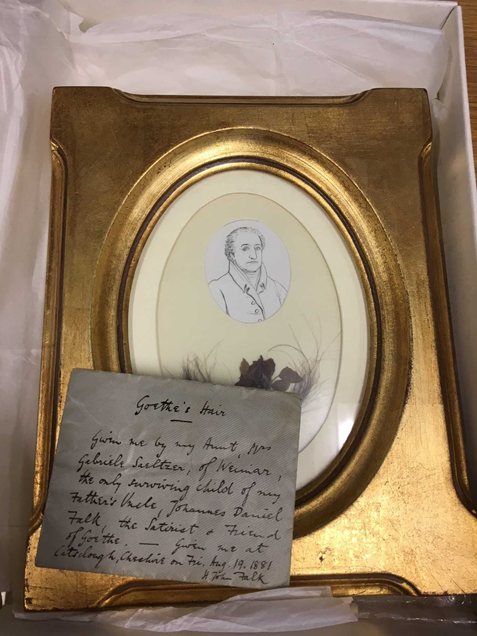 Johann Wolfgang von Goethe (1749-1832) was considered to be the greatest German literary figure of the modern era. He was a statesman, and from 1775 joined the court of the Duke of Weimar. Goethe held several responsible, administrative and advisory posts in the government. Yet, political duties got in the way of his writing. Eventually, Goethe left on a two year trip to Italy (without telling anyone!) in order to come to terms with his art. Upon returning to Germany, Goethe was no longer involved in public affairs. Instead, he cultivated his passions, including his plays, poems, and novels, but also his scientific studies. Goethe’s works include Faust (Part One and Two 1808 and 1832, respectively), Roman Elegies (1795), and The Sorrows of Young Werther (1774). Goethe also found the time to translate works into German, write an autobiography (Poetry and Truth, 1811-33), and also edit and publish several literary reviews!

Goethe died unexpectedly of heart failure, and left behind a vast legacy. He had a profound impact on later literary movements, including Romanticism and expressionism. Goethe’s lifetime spanned some of the most monumental disruptions in modern history, and is often referred to as the Goethezeit or Age of Goethe.

Presumably, as was common place in western cultures when a person was gravely ill or died, locks of hair were shorn from Goethe’s head. The locks were then distributed to close family and friends. As creepy as it may seem to us in the 21st century, a lock of hair may have been comforting to the grieving and also act as a sign of prestige. By the end of his life, Goethe was highly celebrated, and to be seen to possess a lock of hair from the head of the man himself, certainly conveyed privilege. Those of you who are Goethe fans may have noticed this was in complete contrast to how his friend Eckermann viewed removing locks from Goethe’s head. In the final passage of Conversations with Goethe, Eckermann, upon seeing Goethe in his death bed, remembered how he ‘wished for a lock of his hair; but reverence prevented me from cutting it off’.

Clearly, the sheer, celestial monument of Goethe on his death bed, did not stop everyone from taking a small keepsake. There is no record whether Goethe gave his permission for a lock of his hair to be cut. Susan Halstead is a Social Sciences Subject Librarian at the British Library. According to her, Goethe’s reaction to such a request would have depended on who made it. Ottilie von Goethe, his daughter-in-law may have received a favourable response, as she cared for the elderly Goethe until his death. Whereas, Bettina von Arnim would have received a much dustier response. After all, her friendship with Goethe was ended, due to Bettina’s ‘insolent behaviour’ towards Goethe’s wife.

It is unclear how many people were able to obtain a lock of Goethe’s hair, but one person who did was Johannes Falk. Whilst there is no mention of Falk in any accounts of Goethe’s illness in 1823 and eventual passing, chronologies of the day were compiled by scholars collating diaries, letters and conversations in the 20th century. So, it was only people who were actually there at the time, who could have known that Goethe was convalescing. At the time, Goethe was recovering from a near fatal heart illness. It is possible that the lock of hair was cut, unbeknownst to Goethe, whilst he was enjoying a restorative sleep.

Falk (1768-1826) was a German publisher and poet. Frequenting the literary circles of Schiller and Goethe, he became a close friend of Goethe. Therefore, Falk may have been one of Goethe’s visitors when he was taken ill. One inscription accompanying the hair was possibly penned by Falk himself (see Figure 2). The inscription is simply entitled Goethes Haar (Goethe’s hair) and reads as follows:

There is currently no direct evidence that Falk was the true author of this inscription. To establish true authorship, handwriting analysis would have to be undertaken. Manuscripts which are kept in the Falk Archive in Weimar, would need to be compared with the inscription. Despite this, there is still a high possibility that Falk wrote it.

According to the testimony of John Falk, the living descendant of Johannes Falk, he passed on the hair to a daughter, who then proceeded to pass it onto John’s great grandfather. A second inscription also accompanies the artefact and seems to confirm this, with the heading of Goethe’s hair (see Figure 2). The text is in English and is as follows:

Given me by my Aunt, Mrs Gabriele Saeltzer, of Weimar, the only surviving child of my Father’s Uncle, Johannes Daniel Falk, the Satirist and Friend of Goethe.  Given me at Catsclough, Cheshire on Fri Aug. 19. 1881.  H. John Falk. 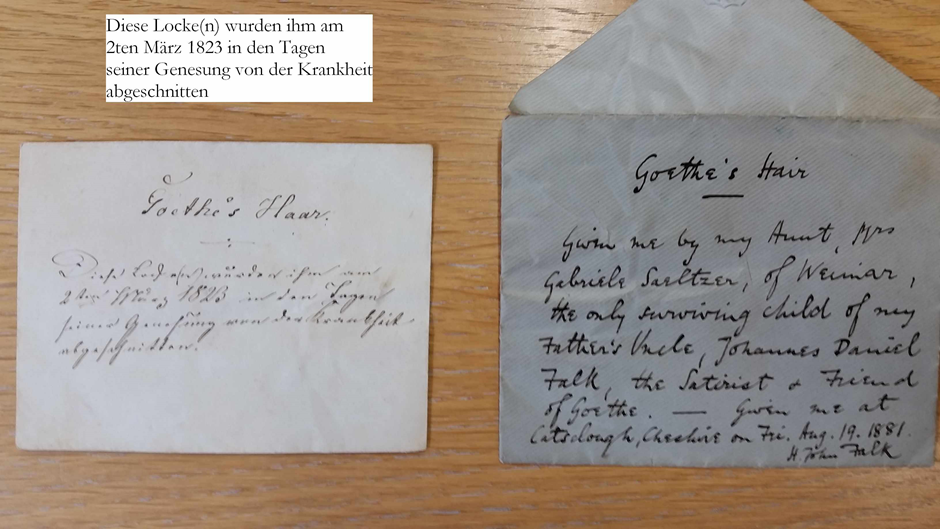 The inscription is on the English little envelope in which the lock of hair was kept for 58 years. It is unclear if Gabriele Saeltzer was visiting Catsclough or if she was a resident. It is very possible that she was one of Falk’s daughters, as out of the ten children he had with his wife Caroline Rosenfield, only two daughters survived. If Gabriela was Falk’s youngest daughter, she would have been in her sixties in 1881. Therefore, she must have treasured the hair for most of her life. It may be natural to assume that she wanted to pass it and other small relics such as the portrait of Goethe and the pressed violet onto the next generation. Gabriele or Falk may have added these items, intending them to be accompanied with the hair wherever it went. Presumably in a similar act of veneration, H. John Falk may have framed the three little items (see Figure 1).

A violet seems to be an odd choice to accompany the hair. But the reason for this, as Lähnemann explained, is due to the popularity of Das Veilchen (The Violet), which is a poem by Goethe. The last stanza of the poem is:

But alas, alas, the girl drew near
And took no heed of the violet,
Trampled the poor violet.
It sank and died, yet still rejoiced:
And if I die, at least I die
Through her, through her
And at her feet.
The poor violet!
It was a dear sweet violet!

Goethe’s poem was composed as a song for voice and piano by Mozart in 1785. Mozart’s composition would have made Das Veilchen a staple piece to be enjoyed in the 19th century drawing room. The violet is a tad masochistic, but its addition is a romantic touch, alluding to the popular ‘crush’ on Goethe.

The sketched portrait has been observed to be similar to other portraits of Goethe. In particular, in Goethes aussere Erscheingung:  literarische und kuenstlerische Dokumente seiner Zeitgenossen by Emil Schaeffer, we can see striking similarities between it and the porcelain painting by Ludwig Sebbers (1826) in Figures 3.1 and 3.2. 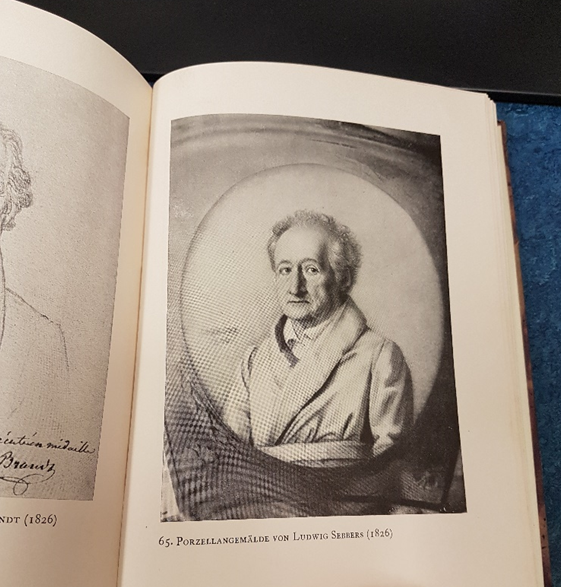 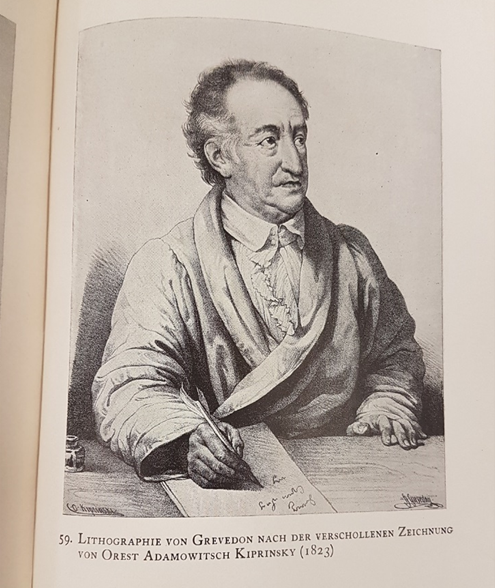 Figure 3.2 Lithograph by Grevedon after the lost drawing by Kiprinsky (1823) Schaeffer’s Goethes Aussere Erscheinung 1914: pl 65 and 59

There also noted similarities in a lithograph by Grevedon, a copy of a lost drawing by Orest Adamovitsch Kiprensky (1823) (Figures 3.1 and 3.2). In both portraits, we can see the same receding hairline. However, the Kiprensky portrait differs from the sketched portrait and Sebbers’ porcelain painting as Goethe’s facial expression is more severe. It is interesting to note that on these portraits, Goethe’s hair is depicted as being quite frizzy, whilst the lock of hair appears to be straight. Despite this, in the chalk drawing by Karl Christian von Vogelstein (1824), Goethe is depicted with much straighter hair (see Figure 4). Vogelstein’s sketch of Goethe is not as flattering as Sebbers’ and Kiprensky’s portraits. Goethe is depicted with large, liquid eyes and a prominent nose. Depending on the artist, Goethe’s appearance will differ. Overall, considering the three portraits, there are features which do bear resemblance to the sketched portrait. Therefore, the unknown artist of the sketched portrait may have been inspired by other, contemporary portraits of Goethe. 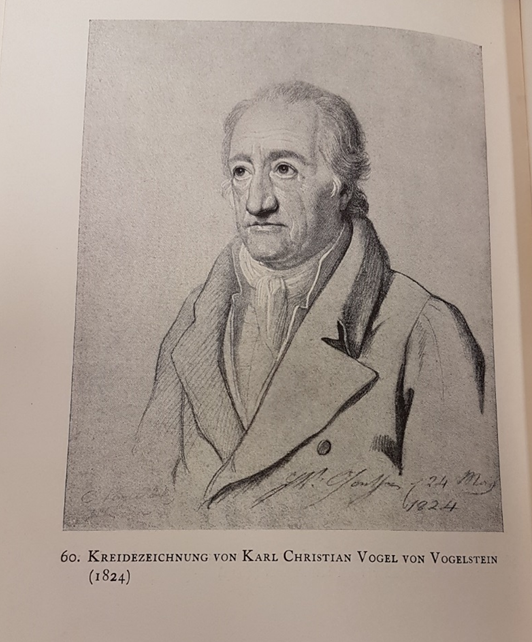 At the start of this post, I mentioned Lähnemann’s observations regarding the hair as if it were a relic of a saint. Johannes Falk and his daughter may have intended the lock to be revered as something holy and immortal. This appears to be a sentiment that Taylor librarians have also shared. In 1953, John’s grandfather, Oswald, agreed to have the hair displayed at the Taylor. The librarian at the time, Donald Sutherland, promised Oswald that the hair would be kept in a show-case in one of the Reading Rooms. For nearly 70 years, the hair has been either on display or kept in the rare book room at the Library. It has never been taken out of its frame, nor separated from the crushed violet or sketched portrait.

Nick Hearn, French and Russian Subject Consultant at the Taylor, adds that in the lock of Goethe’s hair the comical and frivolous seem to combine with the eternal and the hagiographical.

Our obsession with Goethe continues.

I would like to thank my colleagues at the Taylor: Katie Day, Emma Huber and Nick Hearn – for their assistance. Thank you for lending me notes and forwarding some very interesting email chains.

Thank you Professor Henrike Lähnemann and Susan Halstead for your intriguing interpretations surrounding the lock of hair.

Eckermann, Johann Peter. 1839. Conversations with Goethe in the last years of his life. Hilliard, Gray, and company: Boston. Translated from the German by Margaret Fuller.