Istro-Romanian is a ‘Daco-Romance’ dialect, closely related to Romanian and spoken by 200-250 people in North-East Istria, Croatia. Their villages are separated by a mountain, Mount Učka, which explains the continued existence of two dialects, northern and southern IR. The Istro-Romanian area has shrunk since the Middle Ages, when it included the islands Krk and Rab off the Croatian Coast in the Adriatic See. The Istro-Romanians probably descend from pastoral people, who settled in Istria in the 15th century, away from the Romanian homeland searching for new pastures for their flocks. This is the most likely hypothesis about their origins, although a movement of people in the opposite direction cannot be entirely ruled out. 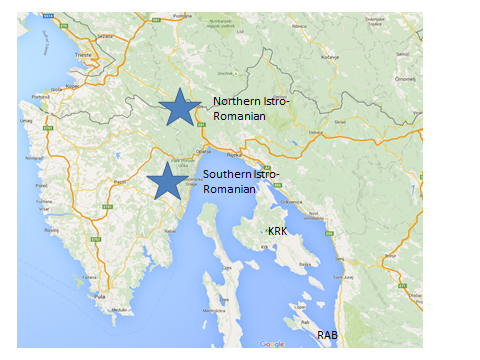 Istro-Romanian is the only Romance language that shows extensive influence from a Slavic language, i.e. Croatian, not only in vocabulary and verbal system but also in word order which is remarkably free. For example

can be translated as ‘The ox asks the ass’ or as ‘The ass asks the ox’. The appropriate translation can only be deduced from the context, which would not be the case in Romanian or in Croatian.

The Istro-Romanian speakers don’t have a great sense of linguistic identity, to the extent that they do not have an indigenous name for their language. All speakers are bilingual in Croatian. There is hardly any written IR, although nowadays social media are used as a means of writing in the local language, all be it without a standardized grammar. IR is mainly orally transmitted and is not used in education in any way.

Given this situation, it is remarkable that so many works about the language have been published. A selection of titles, kept in the Taylorian, can be see below. These books were brought out after the Istro-Romanian seminar on 2nd December, given by Prof Martin Maiden, professor of Romance Linguistics at Oxford who is a specialist in Romanian.

The display included several dialect atlases and a textbook.

The highlight of the book display was an unpublished type-written grammar, written by Anthony Hurren, who did his DPhil at Oxford in 1972. This grammar was donated to the Taylorian as part of the Hurren bequest. It was ready to be published in 1999 but sadly, this never happened due to Hurren’s death. The book deals with phonology, grammar and lexicon of the language and contains a lovely folk tale in the southern dialect about a cat, a cock, a donkey, and a sheep who decide to travel around the world. Since there is not much written material available in IR, Hurren had to collect his language data first before he could contemplate writing a grammar. He interviewed informants from all villages in the region in the 1960s, in preparation for his Oxford DPhil thesis A linguistic description of Istro-Romanian (1972). A list of informants is provided in Appendix B in the grammar which is also based on these sound recordings.

The many hours of sound recordings provide unique Istro-Romanian language material on  reel to reel tape. All is now digitised and kept in the Taylorian as part of the Hurren bequest. A transcription project is underway.

I thank Prof Maiden for his enlightening seminar on 2nd December 2015 in the Taylorian and I am most grateful that I could have the text of his lecture on which most of this blog is based.