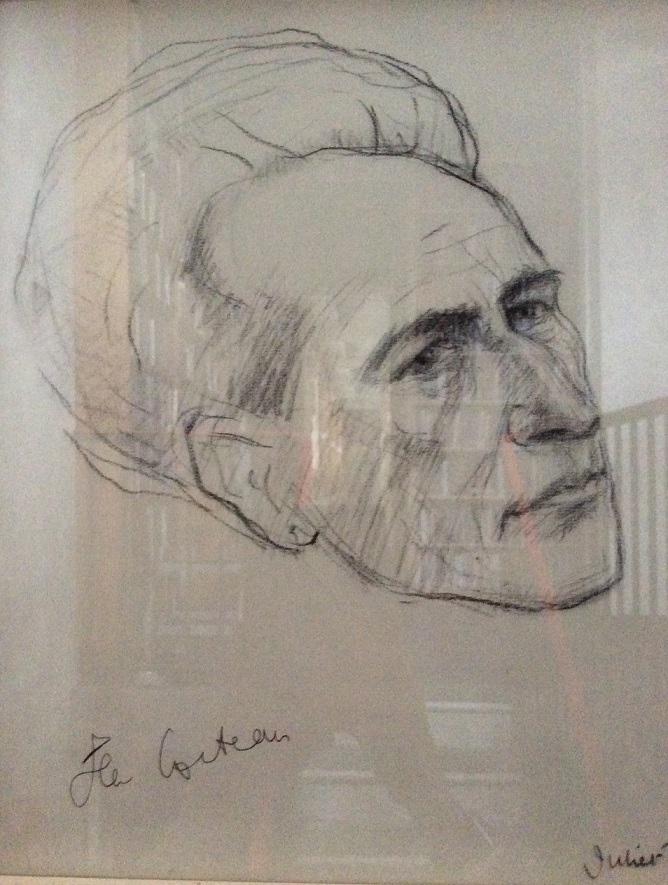 On Tuesday, 12 June 1956, Jean Cocteau wrote in his diary: ‘Je rentre de la cérémonie – très émouvante.’ The occasion was the conferment on the multi-faceted poet (‘omnis Minervae poeta’) of an honorary doctorate by the University of Oxford. As the Public Orator had proclaimed, ‘praesento vobis Parisiacae urbanitatis specimen, Ioannem Cocteau, poetam Francogallorum Academiae adscriptum paremque dignitatem apud Belgas adeptum, ut admittatur honoris causa ad gradum Doctoris in Litteris.’ Cocteau was proud of his membership of the French and Belgian Academies and of his honorary degrees, and he was particularly attached to what he habitually referred to as his ‘honoris causa’ from Oxford. 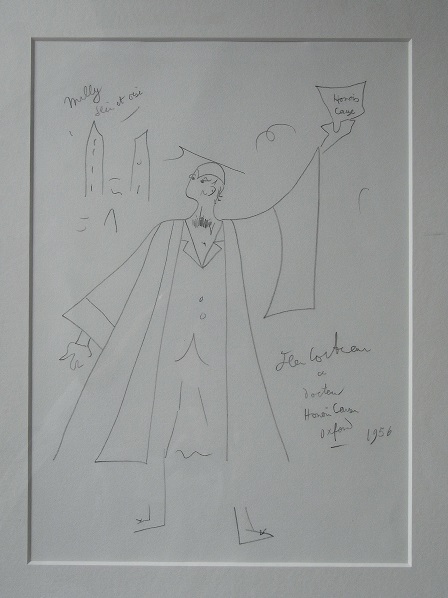 Cocteau’s sketch of himself with his Oxford degree (Photo credit: David Thomas) 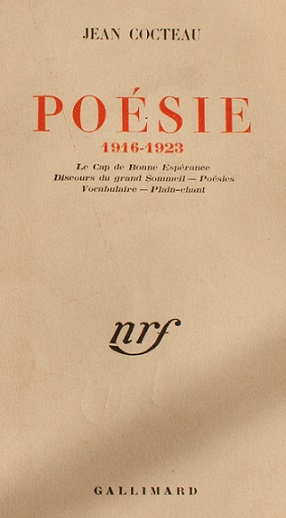 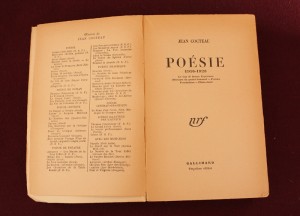 Unremarkable in itself, it is simply a late printing (1947) of a work first published in 1925. What distinguishes it, however, is the fact that on the half-title Cocteau has written a dedication, ‘à Jean Seznec / amicalement / Jean Cocteau / 1956’. And he has pencilled underneath one of his typical drawings of a poet’s head crowned with a wreath of laurel leaves. 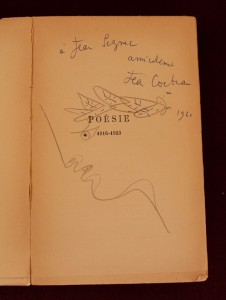 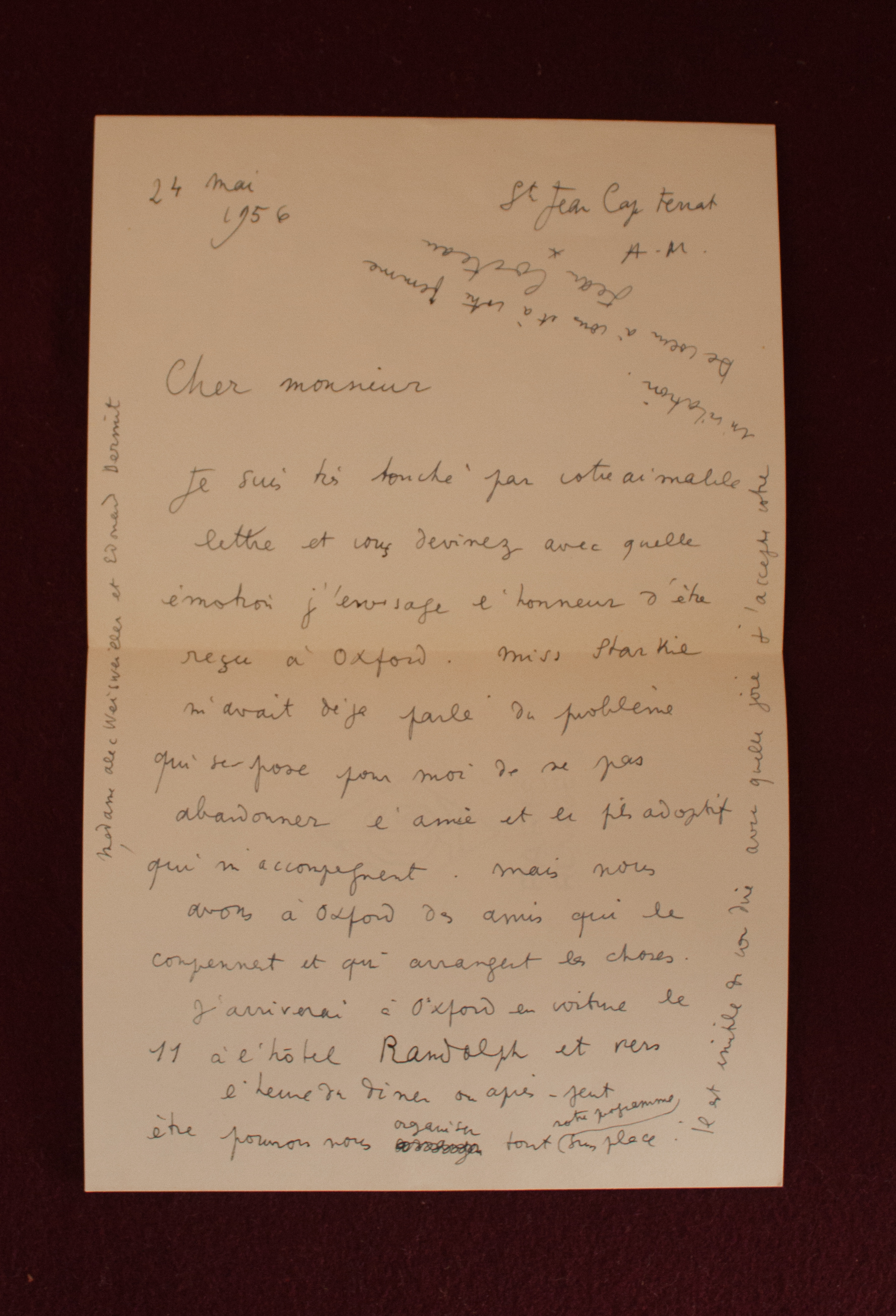 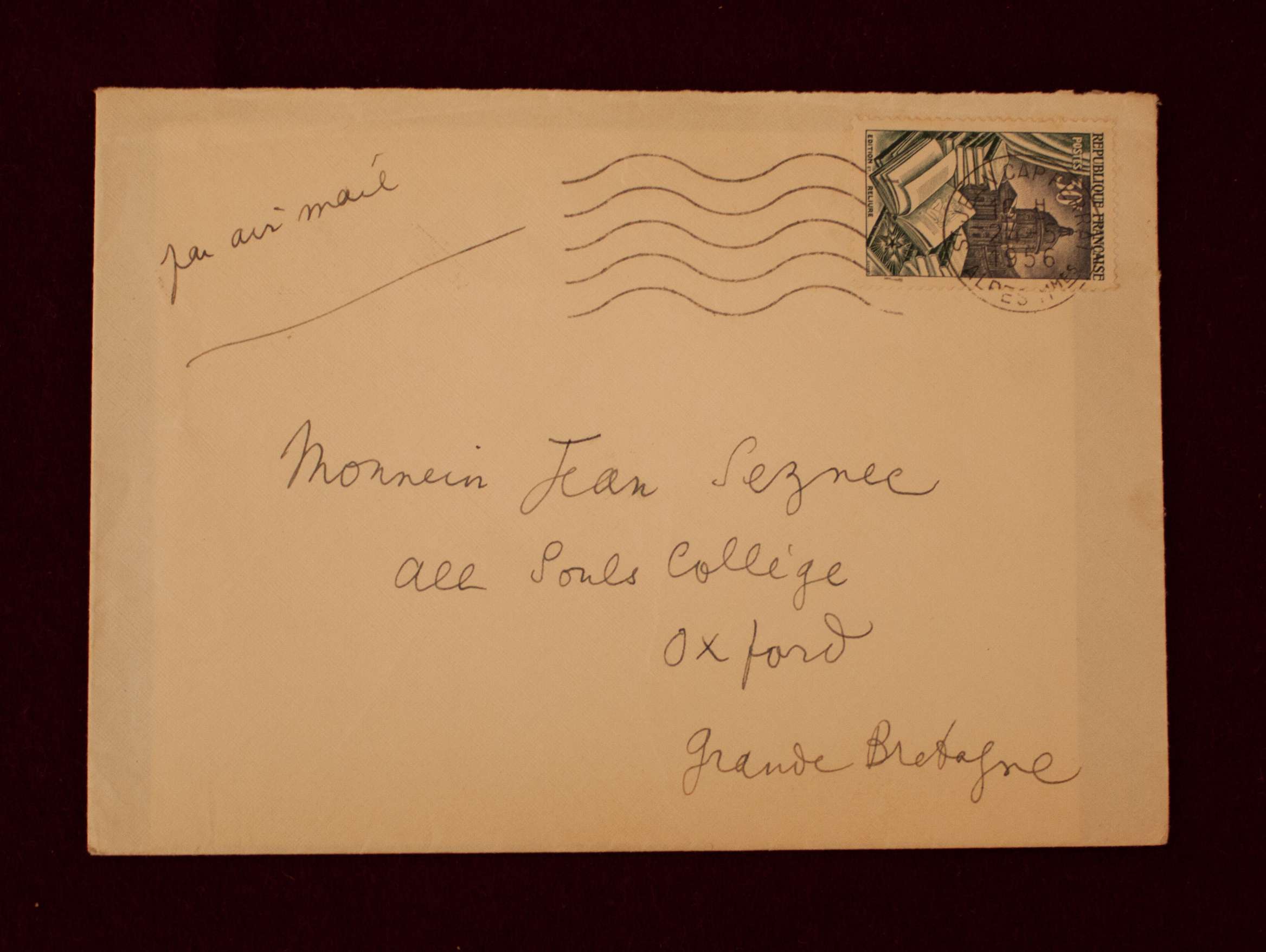 Loosely inserted in the volume is an autograph letter, in its original envelope addressed to Professor Seznec, who was Marshal Foch Professor of French Literature at Oxford from 1950 to 1972. The letter adds to the rich documentation surrounding Cocteau’s honorary degree.

The story begins at the end of December 1955 when an Oxford University student, Michael Smithies, called on Cocteau at his house in Milly-la-Forêt. ‘Il m’a semblé,’ Cocteau wrote in his diary, ‘que Smithies venait tâter le terrain pour un voyage à Oxford où je serais nommé docteur honoris causa.’ The following March, Cocteau received a letter from Dr Enid Starkie, the indefatigable and irrepressible Reader in French at Somerville, inviting him to give a lecture at Oxford and suggesting that she might be able to persuade the University to confer on him an honorary degree. 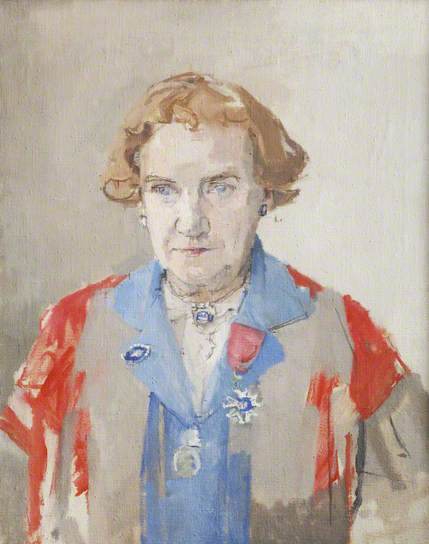 Cocteau was enthusiastic. Enid had promised nothing but Cocteau’s eyes were firmly fixed on the ‘honoris causa’ and he began to suggest that without the doctorate there could be no lecture. Enid duly set to work and handbagged her way through any resistance that might have been shown by the university authorities. ‘I won, in the end,’ she said later to Cocteau’s biographer, Francis Steegmuller, ‘but don’t ask too closely how it was done … I could only use my influence and my prestige to get him the doctorate. That is what got it for him.’ Cocteau was delighted. ‘J’aimerais faire à Oxford quelque chose d’exceptionnel,’ he wrote in an undated letter in the Taylorian’s collection of manuscripts, but he added, somewhat surprisingly, ‘ce petit voyage d’Oxford m’effraye’. His lecture, on ‘La Poésie ou l’invisibilité’, began to take shape (it would be published later in the year as Le Discours d’Oxford) and on 23 May he sent Enid a sketch of himself in cap and gown, with measurements. The following day he wrote to Professor Seznec the Library’s newly acquired letter, giving details of his arrival in Oxford with ‘l’amie et le fils adoptif’, that is, his patron, Madame Alec (Francine) Weisweiller, and Edouard Dermit, who were to accompany him. Cocteau hopes to meet Seznec that first evening to discuss the programme of his stay in Oxford and the letter concludes: ‘Il est inutile de vous dire avec quelle joie j’accepte votre invitation.’

A colourful report in the issue of Picture Post for 30 June 1956 describes Cocteau fizzling through the foyer of the Randolph Hotel ‘like an elderly Puck, wrapped around in a leaf-green cloak’ and being met ‘in a cloudburst of French by a brilliant little lady wearing scarlet slacks, beret and duffle coat’. Enid had a hard day on that Monday, 11 June. A Board meeting in the afternoon was followed by W. H. Auden’s inaugural lecture as Professor of Poetry, a post she had with characteristic energy fought for him to get, then a party for Auden in New College, and, finally, a party for Cocteau given in her ground-floor flat at 41 St Giles’. Cocteau recorded the latter event as: ‘Visite chez Enid Starkie, en kimono et saoule’!

The special meeting of Convocation (the other honorand that day was the geographer Jules Blache, Rector of the University of Aix-en-Provence) took place on Tuesday, 12 June. Enid met Cocteau that morning dressed in her beloved approximation of a French sailor’s outfit, much to Cocteau’s amusement, if not consternation: ‘Enid est charmante, éprise de la France et du français qu’elle enseigne. Mais elle boit … Quelle n’était pas notre stupeur, le matin de mon discours, de la voir arriver en matelot français, avec le béret à pompom, la vareuse, le pantalon à pont et le barda sur l’épaule.’ Lunch was held in New College and, after the ceremony, there was a garden party at the Maison Française. Other lunches and dinners were to follow, with Maurice Bowra, Isaiah Berlin and others, and a visit paid to the Ashmolean. 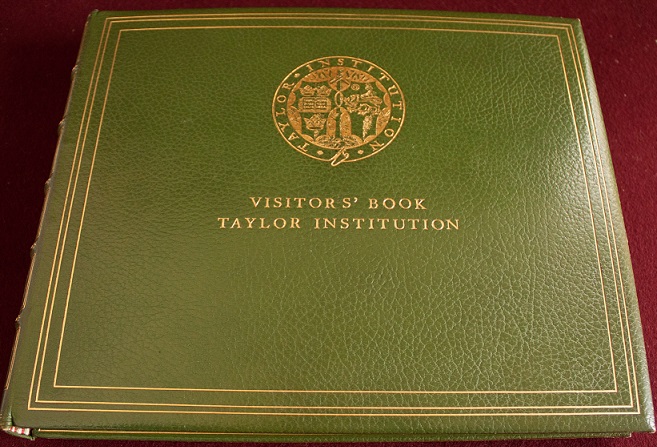 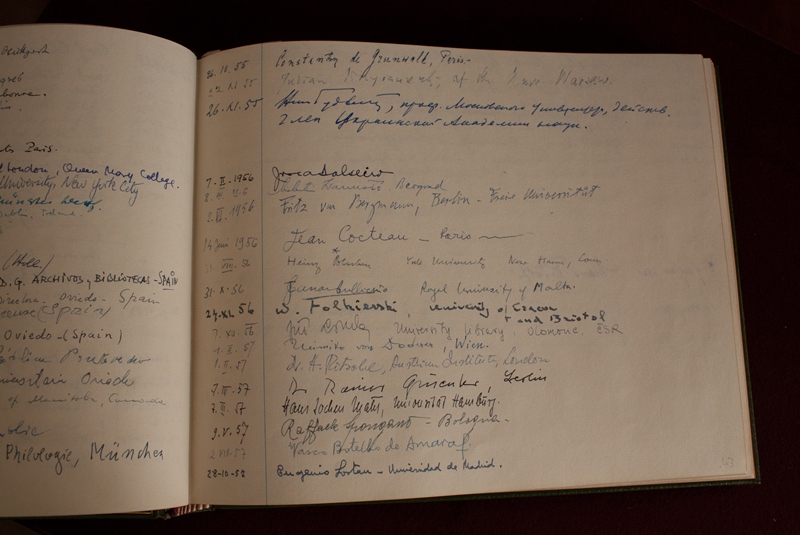 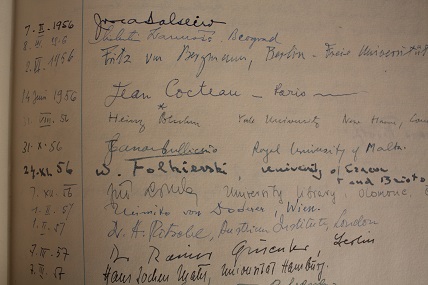 Cocteau delivered his lecture in the Taylorian on Thursday, 14 June at 5 p.m. He was introduced by Professor Seznec, and Enid, Cocteau noted with obvious relief, was now ‘en robe et toque de docteur’! The lecture was received with what Cocteau describes as ‘un tonnerre d’applaudisse-ments’, an expression of affection, warmth and enthusiasm, which, Maurice Bowra assured him, had not been the case with either Gide or Mauriac. Cocteau’s one complaint was that students appeared to have been deliberately kept at arm’s length. ‘De ce voyage,’ he says. ‘me reste une amertume, celle d’avoir été séparé des élèves par les maîtres’, but what could he do, when he was pushed around like a pawn on a chess board? Enid, he thinks, must have kept them at bay on the pretext that they would tire him. In any case, exhausted, he retired to London to the relative calm of Claridge’s Hotel.

Mixed emotions, then, but, in spite of being made fun of when back in Paris (‘On ne songe qu’à me ridiculiser, à plaisanter mon costume’), he retained an affection for Oxford and for his honorary doctorate. 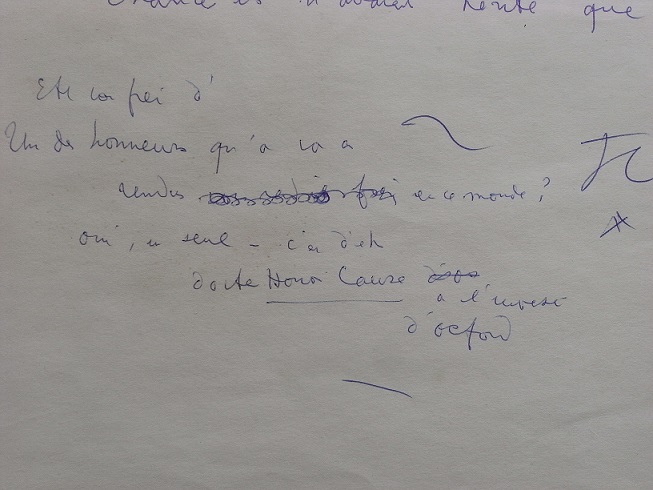 In a scribbled note added to the manuscript of an address he gave to a student audience, a few years later, which the Taylorian also has in its collection, he wrote, in answer to a questioner in the audience who had asked if he was proud of any of the honours which had been bestowed on him in his life: ‘Oui, un seul – c’est d’être docteur Honoris Causa à l’université d’Oxford’.