In this year of Magna Carta, in which new discoveries are being announced with some regularity (such as the discovery of an early copy at Kent County Council Archives, and Winston Churchill’s plan to give away a copy held at Lincoln Cathedral), we are pleased to announce that the Taylor Institution Library also has a copy of Magna Carta! 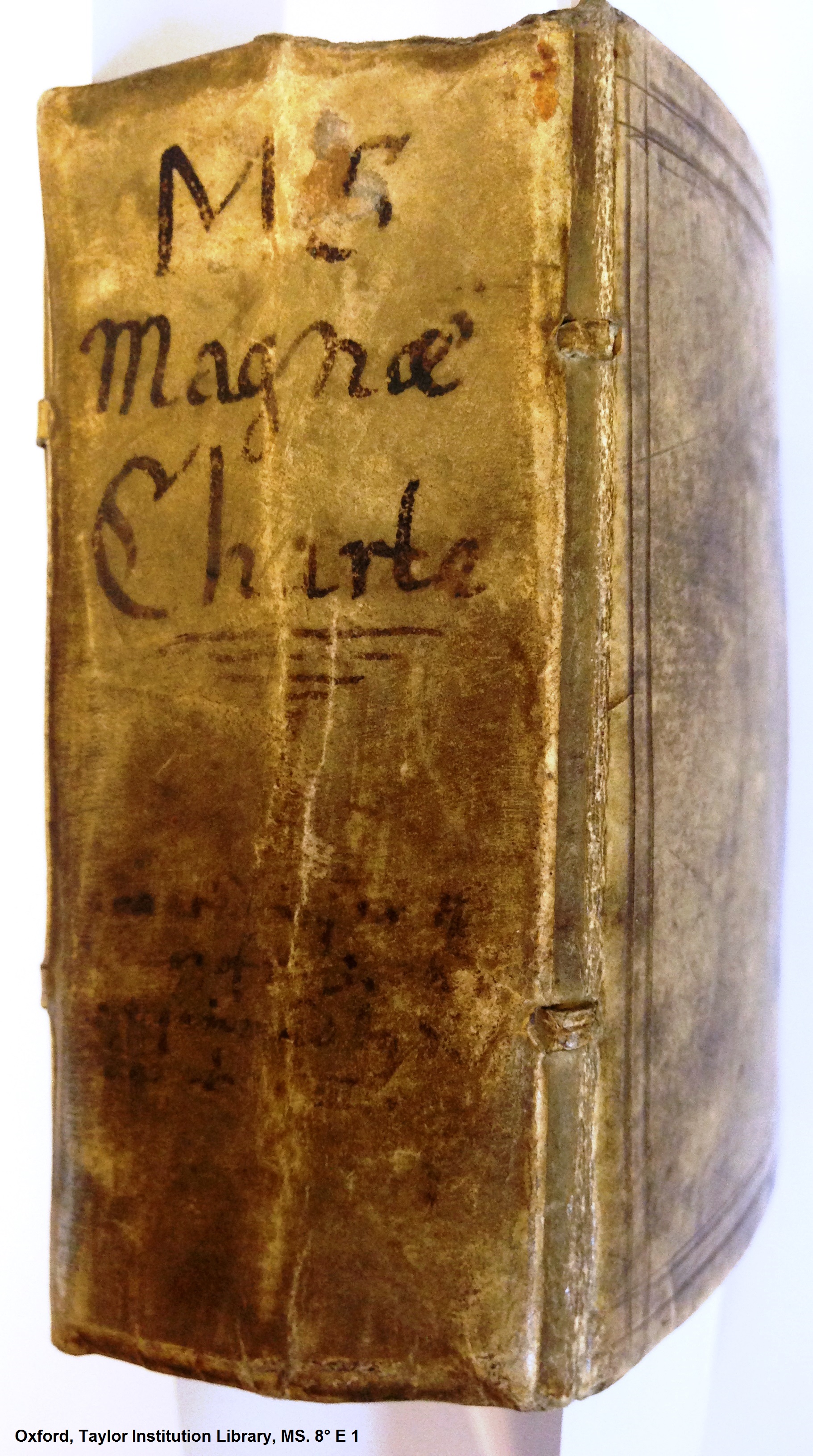 Its existence was first noted, shortly after acquisition, in a letter in Notes and Queries of October 1878, written by Dr Heinrich Krebs, Librarian of the Taylor Institution Library. In his letter, Krebs posed a question regarding a recently acquired manuscript which, judging from his wording, was an unusual addition to the collection:

‘Can any of your readers aid me in ascertaining the genuine character and probable date of a very curious and ancient Latin manuscript on vellum concerning the “Magna Charta,” which has been recently acquired for the Taylorian Library at Oxford? It is of the smallest size (only 3 inches by 2 ½), and contains 214 leaves, three empty ones not included. … Owing to its many abbreviations and minute characters this manuscript is by no means easy to read, and it would require collation with a printed text, if such could be found, to become fully intelligible.’

Krebs seems to have been more comfortable with printed books than manuscripts, and the manuscript quite evidently fell outside his expertise. Help was forthcoming, however, in a somewhat dismissive reply, published one month later, by a regular contributor to Notes and Queries:

‘The collection of law tracts beginning with Magna Charta, such as that described by your correspondent, is not of uncommon occurrence either in manuscript or print. It has been often printed from Pynson’s time downwards. Good perfect copies, as is the case with most of the old law books, may often be had for a small price.’

Dr Fiona Whelan helped me identify the author, who signed with the initials J. C. J., as Rev. John Cohen Jackson (c. 1827-95), schoolmaster, editor of the Astronomical Register, and avid book collector (who regularly offered his manuscripts for sale, too). Richard Pynson, to whom Jackson referred, was one of the earliest printers of English books and known particularly as a printer of legal statutes; the reference, then, was meant to say that there was really nothing special about the Taylorian’s manuscript, that the text had been around in print for as long as English laws had been printed, and good copies were so common in manuscript form that it really was not worth much. The tiny fourteenth-century manuscript was not going to add anything to our knowledge of thirteenth-century English law. 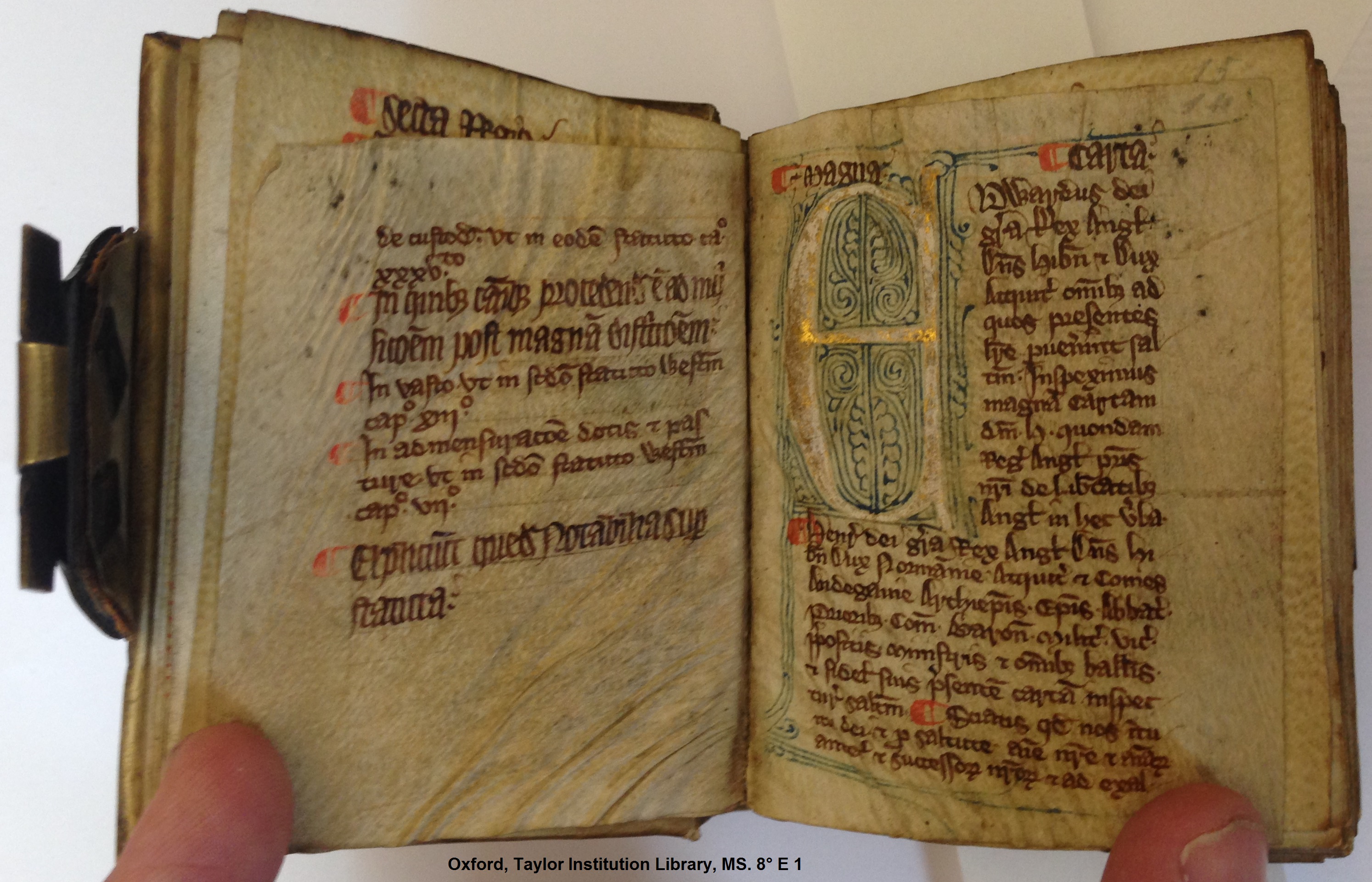 Not entirely surprisingly, the Taylor Institution Library Magna Carta led a mostly dormant existence. There are, however, some reasons that make this little book worth a re-examination. These reasons are, as Jackson suggested, not to be found in the medieval Latin text, which is an unremarkable collection of English laws, including an abbreviated version of Magna Carta as confirmed by King Edward I, but in what happened with the manuscript in the late seventeenth century, around the same time that it received its current binding. On the final leaves, which had remained empty up to this point, a reader made some notes about the contents of the book. Interestingly, the notes focus exclusively on two of its texts: the Magna Carta, and its companion document, the Charter of the Forest. The author of the notes clearly had an interest in legal matters, as well as probably some training; the notes constitute a brief discussion of the version of Magna Carta contained in the manuscript, copied directly from Sir Edward Coke’s Institutes, the principal seventeenth-century commentary on English common law. (‘This statute of Magna Carta is but a confirmation or restitution of the Common Law as in the statute called Confirmatio Chartarum anno 25 E.1. … [It] has been confirmed above thirty times and commanded to be put in execution’.) 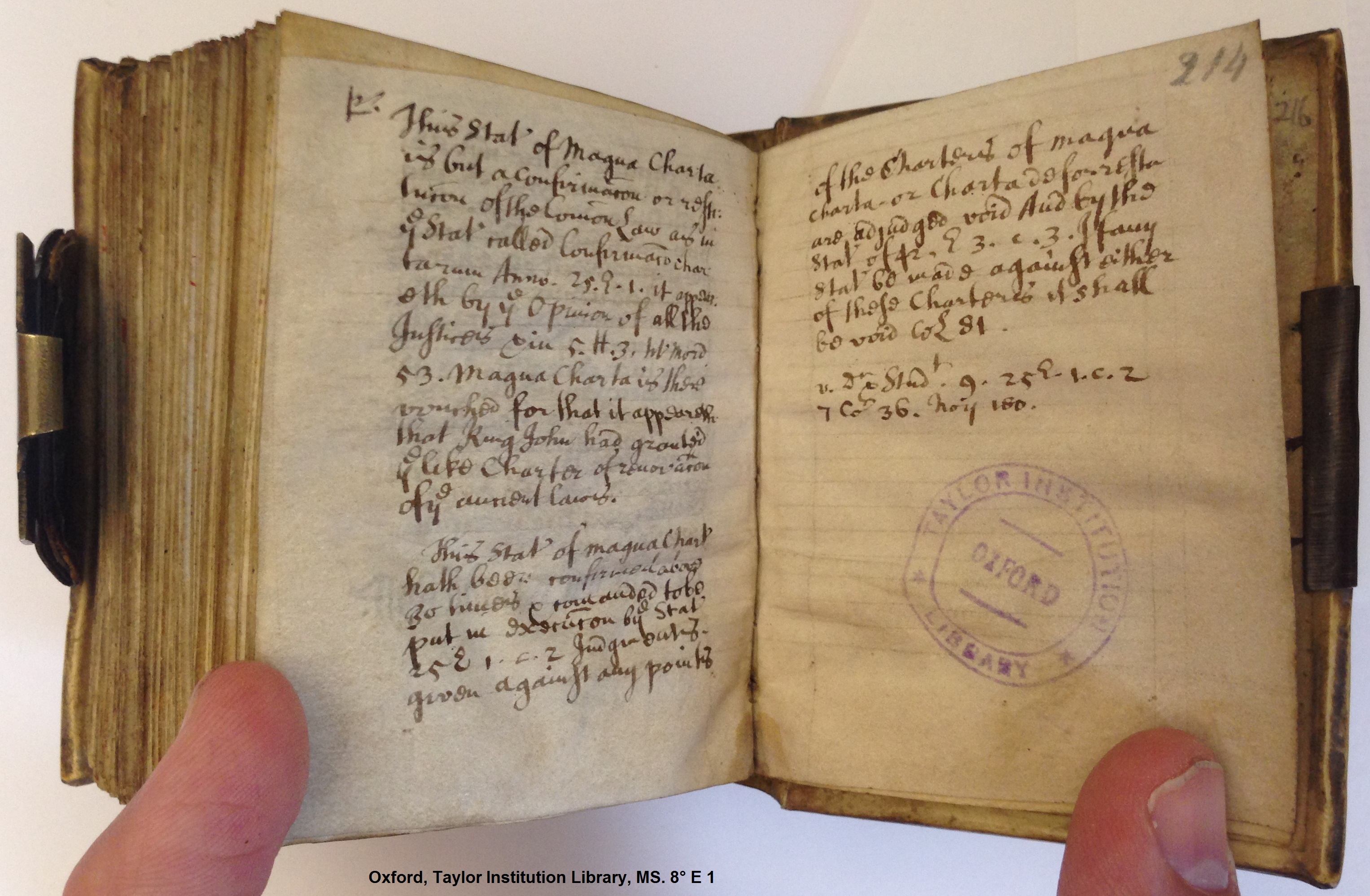 According to a note on a front flyleaf in the current binding, in 1705 the manuscript was owned by James Mickleton. James Mickleton the Younger (1688-1719) was a member of a family of lawyers, and he inherited the collection of manuscripts first established by his grandfather, Christopher Mickleton (1612-1669). James would go on to greatly expand the collection, but he died under suspicious circumstances, in 1719, drowned in the Thames, leaving behind significant debts. His books were sold off and eventually came into the hands of Col. William Wasey (d.1817). His son, George Wasey, advised by Sir Henry Ellis of the British Museum, presented the entire collection to the Bishop of Durham, Shute Barrington, who subsequently divided the collection between Bishop Cosin’s Library in Durham and the Inner Temple Library in London. It appears, however, that George Wasey did not part, at this point, with the Magna Carta manuscript; instead, he wrote his name below James Mickleton’s, and kept it for himself. 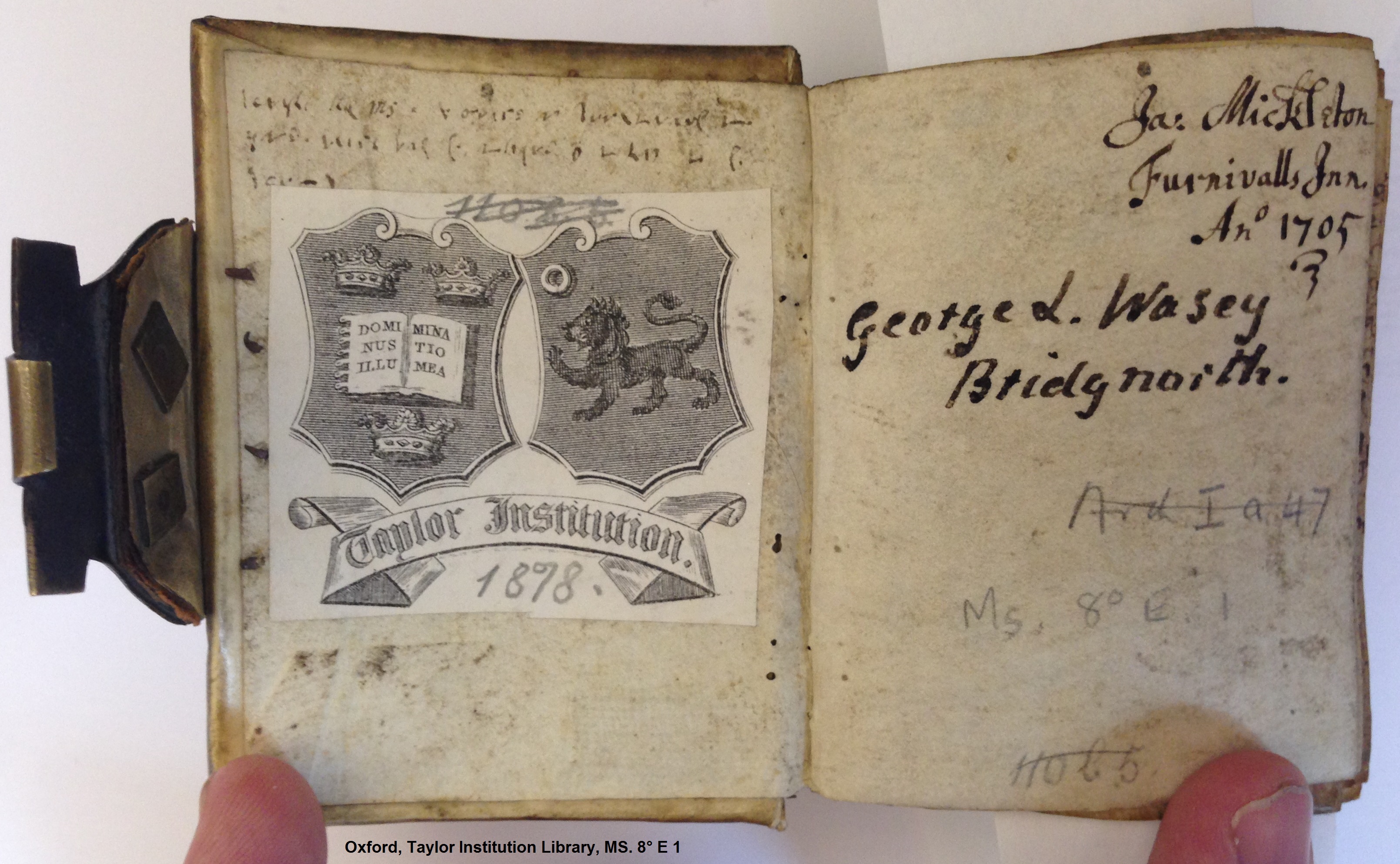 This little book, then, and the collection from which it stems, are witnesses to an interest in historical manuscripts by seventeenth- and early eighteenth-century lawyers (an interest also exemplified by Sir John Selden, whose bequest was the largest single gift to the Bodleian Library in the seventeenth century); and an interest in Magna Carta among a more general readership in the nineteenth century. Entirely ignoring all the other contents of the manuscript (such as the Statute of Winchester, the Statute of the Exchequer, and the Statute of Wards and Reliefs), these readers were interested in only one text – and it’s the same text that keeps us all busy in this year of celebration. 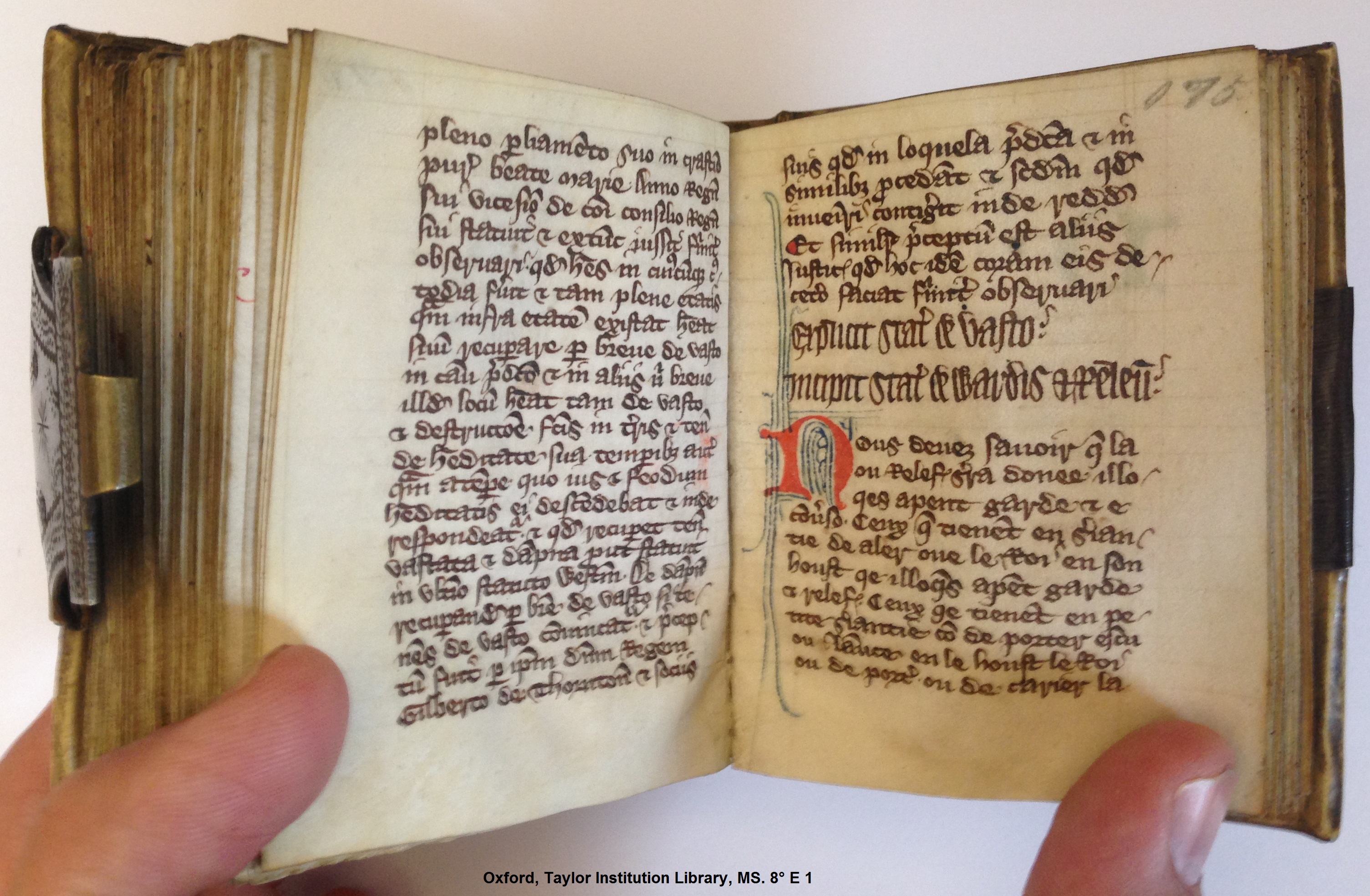