On 1st November 2017 Dr Dominique Santos, a visiting scholar at the Oxford Centre for Late Antiquity from the University of Blumenau, Brazil, gave a lecture on Ogham in the series ‘Introducing Ancient Scripts’. He kindly sent us a summary of his lecture. We are pleased to include this in our blog especially since he spent many months in the Taylor Institution Library for his research on Ogham, the script used for Old Irish, mainly inscribed on stones in Ireland, Wales and Scotland. Remarkably, the inscriptions were not made on the face but on the edge of the stones. 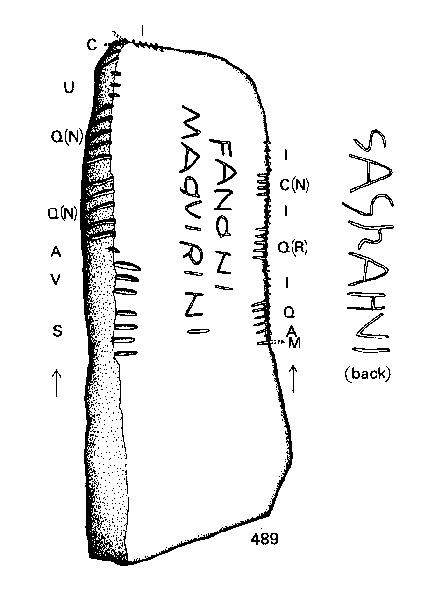 Some of the Ogham Stones are bilingual Ogham – Latin. In the studies on Latin language and bilingualism in Britannia Romana (Roman Britain), Ogham Stones are not often discussed. Aside from very specific studies, mainly conducted by Celtic scholars, little is said about the contexts of bilingualism (ADAMS, 2004) considering these monuments. There is a propensity in Roman epigraphic studies, including the most recent ones, to disregard bilingual Ogham Stones, even when focused on Late Antiquity.

That is why I have spent a year studying mainly the Ogham Stones. In the Taylorian I had access not only to the most important publications in the field of Ogham but also to the history of Ireland, England, Scotland, Wales and the Isle of Man as well. The Library has a wonderful staff and the team is very knowledgeable about the collection and ready to help scholars research and explore this material. 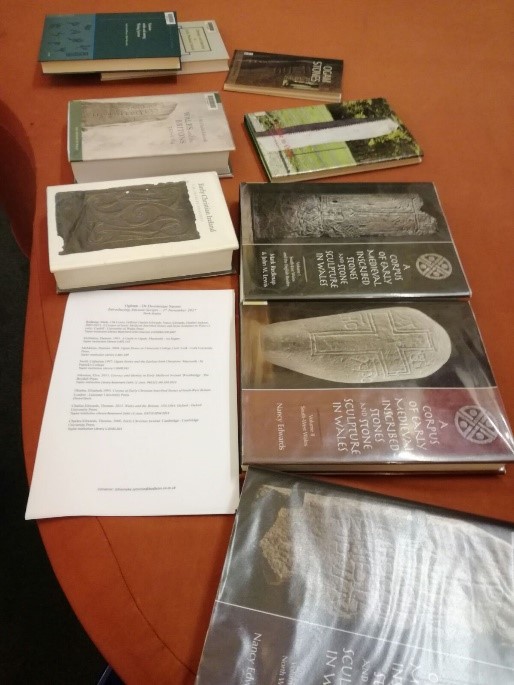 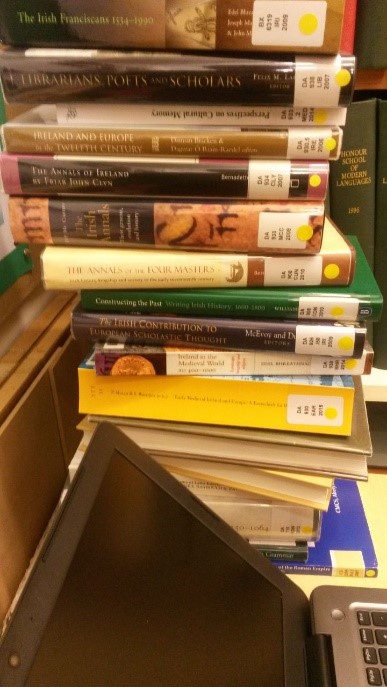 During my working days at the Institutio Tayloriana, I have been asking myself the following questions: what could Ogham Stones tell us about exchanges and connections across the Irish Sea in Late Antiquity? Will the knowledge of this specific corpus be able to increase our understanding of the interaction among diverse cultures that inhabited, traded and communicated in (post-) Roman Britannia? Besides what has already been produced in other disciplines, how far could a historical approach to the subject contribute to its comprehension? Will these monuments have a broader role in historical books, being appreciated not only as merely illustrative ‘narrative appendices’ or an epigraphic object working as complement to other written sources? These are some of the issues I was concerned about.

‘Ogham Stones’ is the name the researchers of this field use to make reference to some erected stone monuments in Ireland, the Isle of Man, Wales, England and Scotland. This designation is based on the main alphabet, Ogham, created to carve short written messages on these monuments, which enabled the sound representation of the Irish language in its infancy. Because of this, Ogham Stones are considered national monuments in Ireland and controlled by the Department of Arts, Heritage and the Gaeltacht, an official government body. In fact, the majority of the stones are in Ireland, mainly in the South, in the counties of Kerry, Cork and Waterford, from where 247 inscriptions are registered. It would be a very hard task to keep them apart from their Irish background and the debate about the idea of Irishness. However, Ogham Stones are not restricted to Ireland; they are fundamental evidence for elucidating many aspects of the history of the places where they are found (MCMANUS, 1991; SANTOS, 2015) and, above all, the exchanges and connections across the Irish Sea in Late Antiquity, the object of this research. 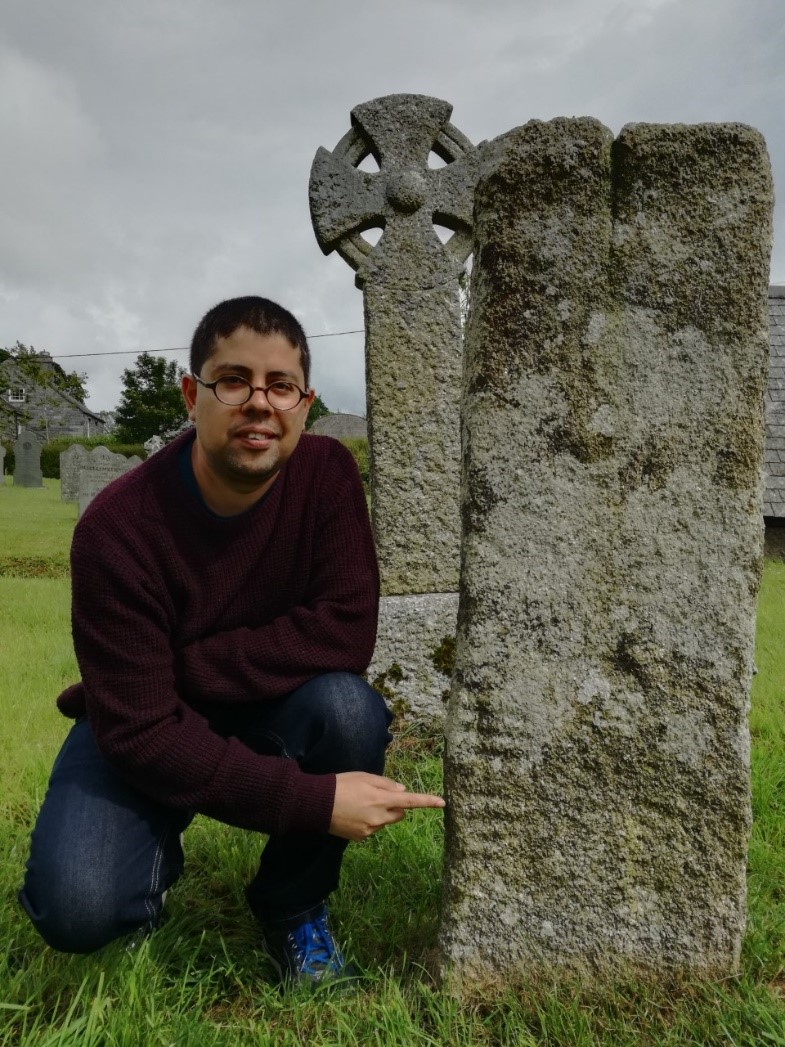 In order to carve the messages using the Ogham alphabet, incisions were made around the edges of a stone, interpreted like a ‘natural line’, from bottom to top and left to right. The meaning was determined by the number, position and direction of the notches in this ‘line’. The marks were grouped in four blocks (aicmí) of five, corresponding to 20 letters. When they stand to the right of this central stemline they are consonants: one incision makes a ‘b’, two a ‘l’, three a ‘v/f/w’, four a ‘s’, and five a ‘n’. Following the same pattern, but to the left side: ‘h/y’, ‘d’, ‘t’, ‘c’, and ‘q’. Five diagonal marks across the stemline make the sequence ‘m’, ‘g’, ‘gw’, ‘st’, and ‘r’. The vowels were made with dots or horizontal lines crossing the stemline of the rock, also following the same logic. Thus, ‘a’, ‘o’, ‘u’, ‘e’ and ‘i’ (THURNEYSEN, 2003). A graphical example can be seen on the figure below. 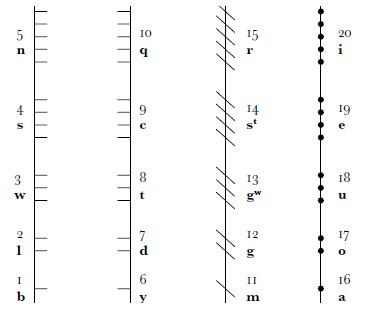 The inscriptions to be carved were conceived by the ‘Oghamist’, a certain scholar with a deep knowledge of Irish tradition, mainly of the Early Irish Language (MCMANUS, 2006). In order to achieve a better quality, this scholar designed a sample, perhaps modelled on wax or a wooden piece and then a craftsman would have the task of carving the inscription at its final destination, the stone itself. It is possible that the person hired to do the job had little or no knowledge at all of the content of the writing, which could lead to misunderstandings and mistakes (MACALISTER, 1945/1996).

Ogham inscriptions have a similar pattern; they usually consist of personal names, ancestry or tribal affiliation. Fionnbarr Moore explains the inscriptions have a specific number of formulae: X MAQI Y, in English ‘X son of Y’; X AVI Y, in which AVI means ‘grandson’; X MAQI MUCOI Y, in this case, MAQI means ‘descendant’ and MUCOI perhaps stands for  some ancestral deity; another common Irish word is ANM, meaning ‘name of’; some stones also have inscriptions with KOI, which means ‘here’, this being the equivalent to the Latin Hic Iacit (Iacet) ‘here lies’; another important word is CELI, like in the formula X CELI Y, which means, ‘X follower of Y’. These phrases can be mixed to generate formulae like: X MAQI Y MUCOI Z; X KOI MAQI MUCOI Y (MOORE, 2010). In several occasions there is no formula at all, but just isolated names (MCMANUS, 2006, p. 98-99).

Despite the nomenclature and the epigraphic tradition, Ogham was not exclusively carved on stones, but also on other objects including bones, a wooden weaver’s sword, and a knife-handle (MCMANUS, 2006). From the 7th century on there are manuscripts written in Ogham. The most important of them is the Auraicept na nÉces, preserved at the fol. 169r- 180v of the Book of Ballymote, which explains how the alphabet works. 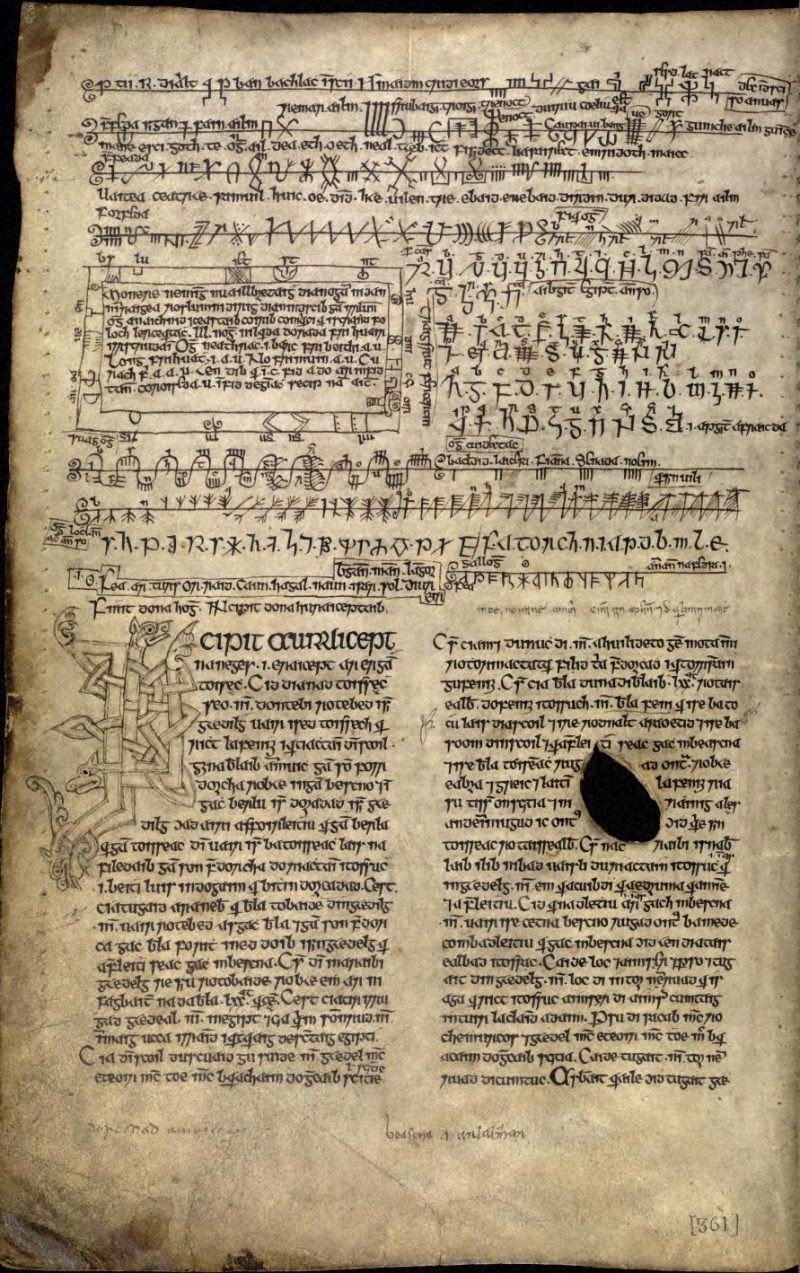 The tradition according to which the name of the letters of the Ogham alphabet comes from names of trees originated in this document; another fundamental text is the De dúilib feda na forfid, a manuscript that explains the functionality of the Ogham additional characters; In Lebor Ogaim, in its turn, is the most ancient treatise written in Old Irish about Ogham.

A definitive or absolute chronology for Ogham inscriptions cannot be provided. Since dendrochronology, thermoluminescence, carbon-14 and other modern dating methods are not useful to give a precise year of a stone, we can only try to figure out a relative chronology and this is what specialists have done. By using a philological approach and comparing the findings with other written sources and historical facts, finally, it is believed that Ogham Stones were probably carved since the middle 4th or the beginnings of the 5th century. However, it is possible that the alphabet employed to write the first graphical signs of Old Irish language was in use by the 2nd century (HARVEY, 1990, p. 13-14), or even the 1st (CARNEY, 1975, p. 53-65), and continued to be produced until the 9th (MCMANUS, 1991). 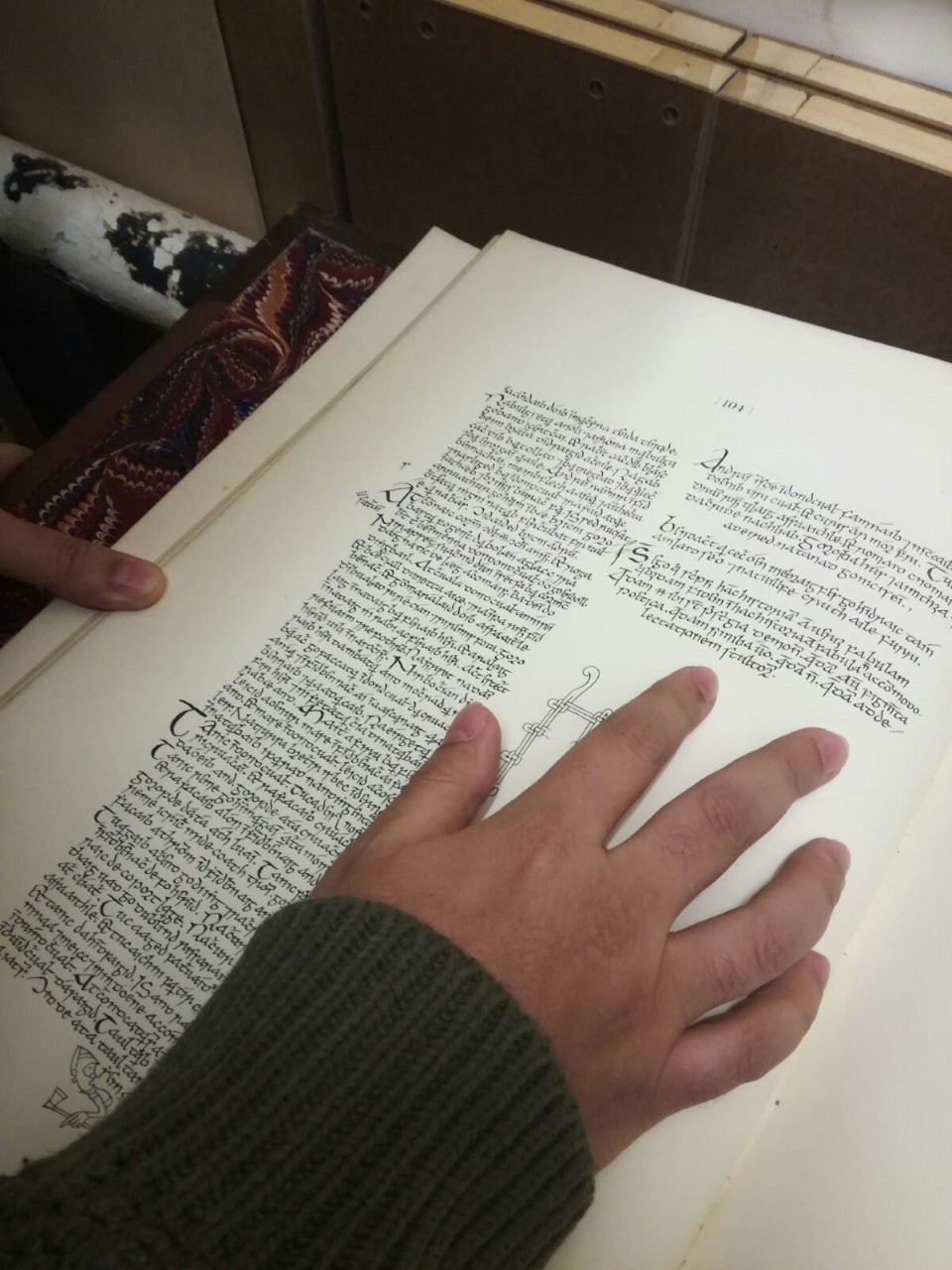 Over such a vast period, some changes in this Irish epigraphical tradition can be noticed. Perhaps, the most remarkable could be the way the marks were carved. From the 4th until the 6th century they were made over the edge of the stones, interpreted as a ‘natural line’; since the 7th century, the stemline started to be drawn on the surface of the stone. 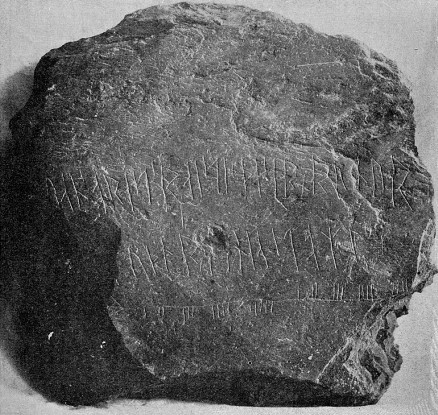 Generally, the first group of inscriptions is denominated as ‘orthodox’; the second is called ‘scholastic’. 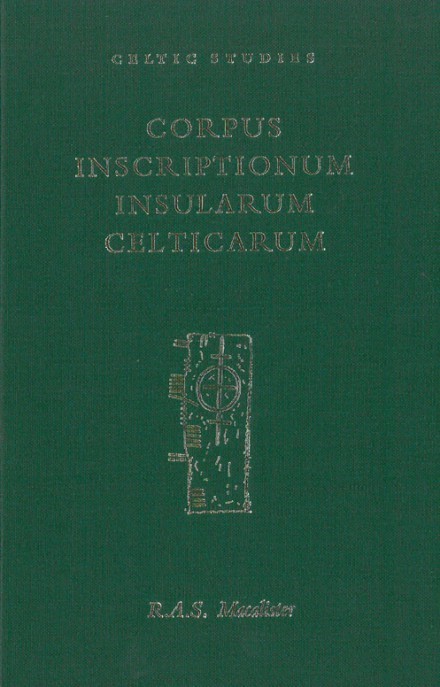 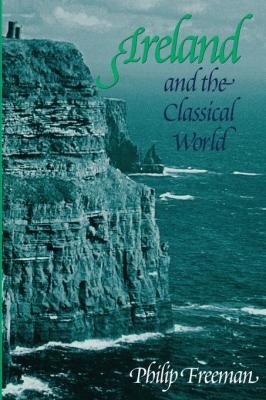 If Britannia Romana made an impact on Hibernia (the Latin name for Ireland), the opposite also happened. John Roche states that forts and cities in the region of what is Wales today, such as Cardiff and Caerwent, were designed to withstand Irish attacks, which saw the region as a potential slave market like the one in which (Saint) Patrick was captured. Many Roman coins were found in Ireland and are evidence for both trade and Irish incursions. This movement helps us to understand the later Irish colonies in Britain, evidence of much more permanent diplomatic relationships (ROCHE, 1993, p. 7-9). Anthony Harvey explains this is not surprising at all as the sea at the time was more a way than an impediment. Thus, the Irish Sea must have formed what he calls ‘an effective block to cultural communication for hundreds of years’ (HARVEY, 1990, p. 14). According to Charles Thomas, Irish presence in Britain may go back to the 3rd century and have lasted until the Viking incursions and is attested by the existence of personal names, nouns and conjunctions in Ogham inscriptions from the region (THOMAS, 1973, p. 5-13).

Thomas Charles-Edwards has pointed out that these inscriptions in Ogham indicate a desire to elevate Old Irish language to the same level and status as Latin (CHARLES-EDWARDS, 2000, p. 176-177).

To investigate Ogham Stones as evidence of historical connections across the Irish Sea was the challenge of my research, developed as part of my Sabbatical Leave at Oxford Centre for Late Antiquity. It would hardly have been possible without having access to the Taylorian Celtic Collection.

Dr. Dominique Santos – Lecturer in Ancient and Medieval History at FURB – University of Blumenau – Santa Catarina – Brazil, was a Visiting Scholar at Oxford Centre for Late Antiquity in 2017.

ATKINSON, Robert. The Book of Leinster: sometime called the Book of Glendalough: a collection of pieces, prose and verse, in the Irish language, compiled in part, about the middle of the twelfth century: now for the first time published from the original manuscript in the Library of Trinity College, Dublin. Dublin: Royal Irish Academy, 1880.