In the lovely sunny week of 8-12th July, twenty-four students gathered in St Edmund Hall for the first edition of the Old Frisian Summer School. Eleven students came from the University of Groningen, most of them Frisian speakers. Others hailed from Oxford or from as far afield as  St Petersburg and Toronto, a mix of undergraduates, postgraduates and post-doctoral researchers. Sessions were held in St Edmund Hall, the Taylor Institution Library and the Weston Library.

Old Frisian was an Old Germanic language, spoken along the mainland North Sea coast, as far south as the river ‘Zwin’ or, in Old Frisian, ‘Sincfal’, which is nowadays the border between the Netherlands and Belgium, and as far east as to the river Weser in Germany. The area shrunk over time, by 800 AD the river Rhine was the southern border, by the year 1000 the western border was formed by the river Flee. Over time, the area diminished as Prof. Rolf Bremmer (Leiden University) showed in his first lecture ‘The Scope of Old Frisian Studies’. 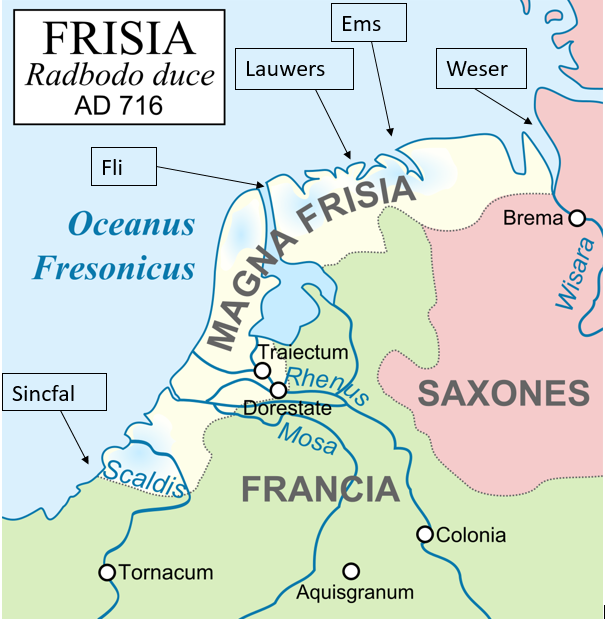 Archaeological evidence shows that there were plenty of Anglo-Frisian connections during the 7th and 8th centuries, proven by very similar jewellery and other finds either side of the North Sea, as Nelleke IJssennagger, former curator of the Frisian Museum and co-author of Frisians and their North-Sea Neighbours, showed in her lecture. There was ongoing trade after the settlement of Britain, so language contact must have been maintained in the following centuries. 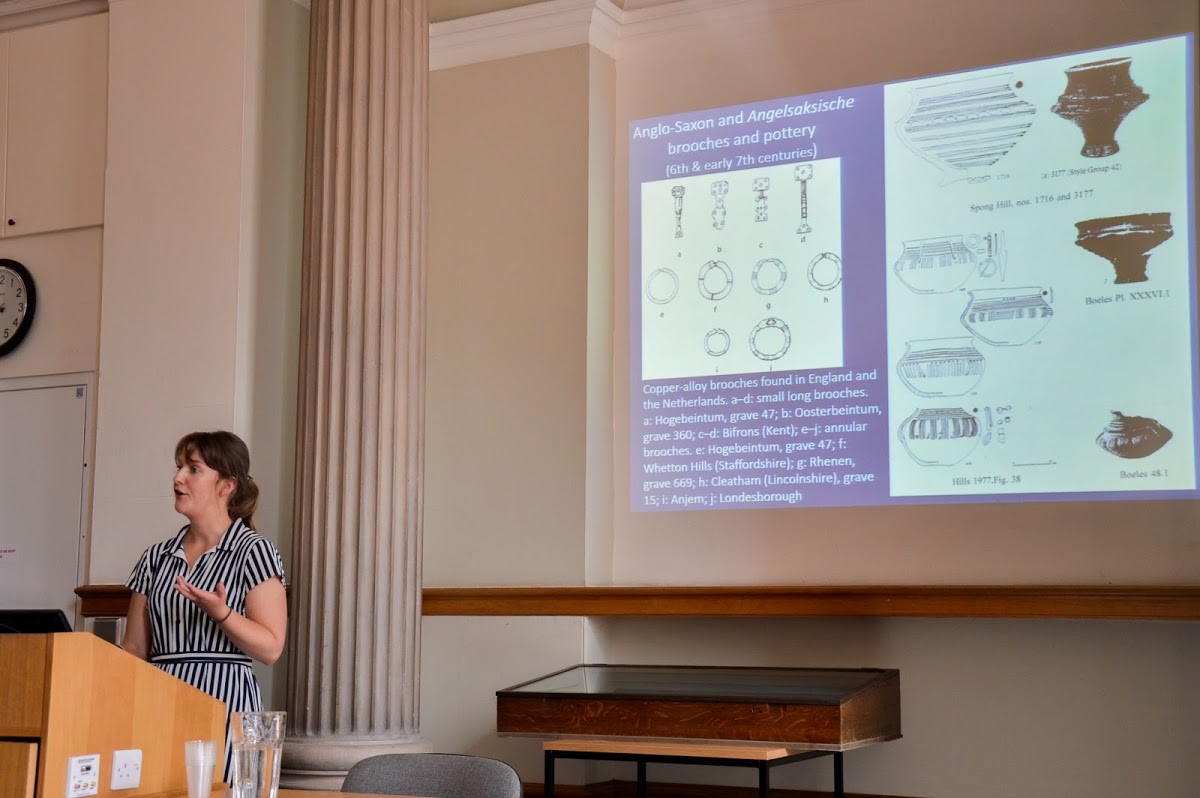 Dr Nelleke IJssennagger with an image of artefacts from Kent and from Frisia.

Linguistic similarities between Modern English and Modern Frisian still show the close connection between the two in comparison with German and Dutch:

These similarities are just an example of connections that were much closer at the time of Old English and Old Frisian. The closeness of the two Old Germanic languages led to the Anglo-Frisian hypothesis, the assumption of one common Anglo-Frisian ancestor from which both Old English and Old Frisian descended. Scholars adhered to this hypothesis for a long time, until 1995 when Dr Patrick Stiles (UCL) denounced the theory on phonological grounds. Dr Stiles explained that many supposed ‘Anglo-Frisian’ sound changes are in fact also shared with Old Saxon or Old High German. The only sound changes that are exclusively Anglo-Frisian are the fronting of West Germanic long ā > ē or ǣ and the fronting of West Germanic short a > e or æ. The West Germanic vowel remains unchanged in Old High German, as shown in the table below.

Why a Summer School?

Old Frisian may be regarded as a ‘niche’ subject within the study of Old Germanic languages and is not always part of the curriculum at universities that offer Old Germanic. To enable students and early career researchers with an interest in Old Germanic to familiarise themselves with the Old Frisian language, its history and its textual sources, the Old Frisian Summer School was organised outside of term time. It was a great advantage to have such an international group of delegates, and many were amazed how much they learned in a week, enough to actually translate Old Frisian texts.

Some unique Old Frisian sources are found at Oxford in the Bodleian Library. These manuscripts are the main source of our knowledge of Old West Frisian[1].  Collections of law texts, the manuscripts came to Oxford by Franciscus Junius’ bequest, dated 1677. Junius was a polymath who had taught himself Old Frisian by copying parts of Codex Unia, now ms Junius 49 and ms Junius 109.   He had borrowed Codex Unia from the Frisian history writer Simon Abbes Gabbema, and failed to return it. (Nothing new under the sun!) He must have borrowed Codex Aysma, now Junius 78, from Gabbema, too. These two manuscripts constitute the base of Old Frisian studies at Oxford. 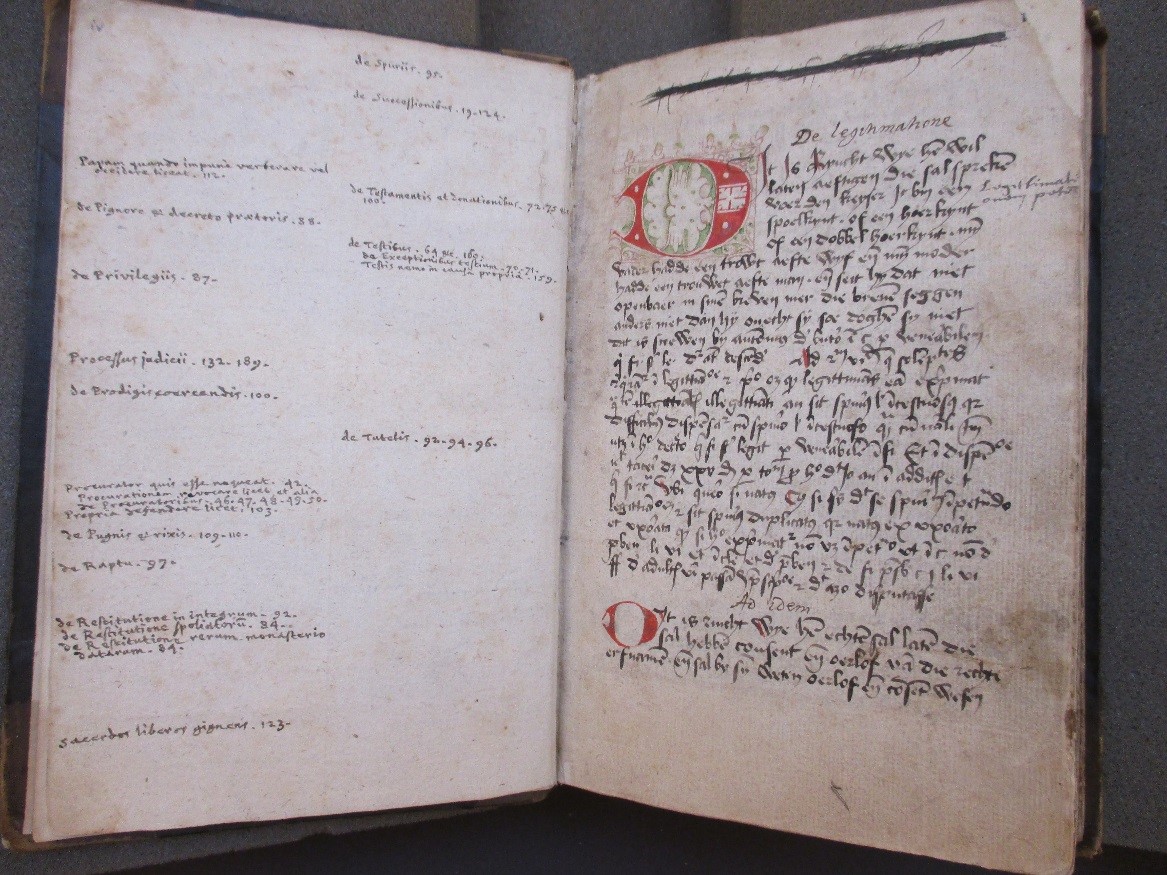 The first lines of Codex Unia, Bodleian Library, ms Junius 49, in the hand of Franciscus Junius.

Was it fun or hard work?

The summer school programme consisted of lectures in the mornings and workshops in the afternoons, interspersed with some social events and library tours and with excellent lunches. The morning lectures covered the grammar and phonology and aspects of the overarching theme of Anglo-Frisian Connections.  Delegates were presented with an introduction to the field of Old Frisian Studies by Prof Rolf Bremmer (Leiden) to set the scene. Dr Leneghan (Oxford) , whose forthcoming monograph on Beowulf will contain a section on the role of the Frisians, a gave a lecture on Frisians in Beowulf, showing the presence of Frisians in Old English Literature. 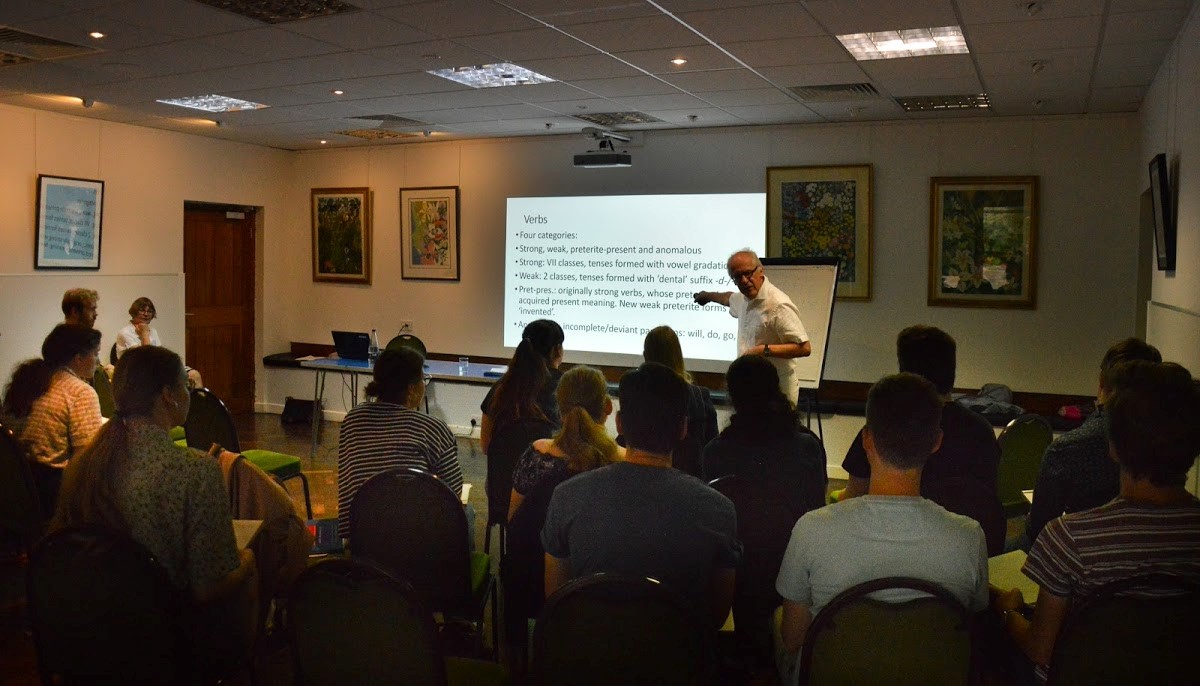 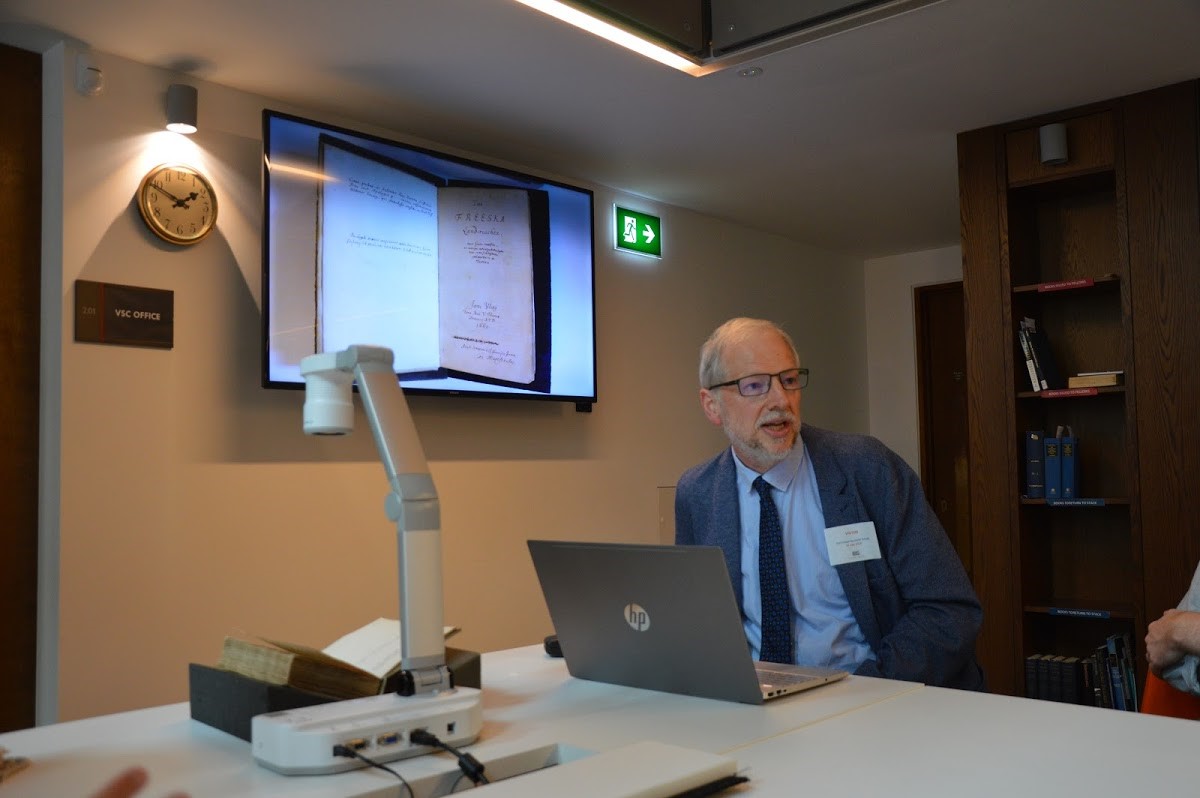 The delegates had to learn Old Frisian grammar in just three lectures; though most students had some prior knowledge of at least one other Old Germanic language, this was still felt to be a crash course.  Following two grammar lectures by Prof Bremmer and Dr Sytsema, Dr Nelson Goering (BA Research Fellow, Somerville College) explained eight sound changes that are typical for Old Frisian. For those interested in comparative Old Germanic, Dr Howard Jones (Oxford) offered a more in-depth comparison of the verbal classes in the Old Germanic languages.

It may have felt like a crash course, but delegates proved to be able to translate some Old Frisian texts with the help of the grammar and the dictionary (see references) of which each delegate had a copy. The translation classes were valued so much so that none of the students wanted to stop at 5pm when they had not finished their assignment! Since the groups were multilingual in a modern sense (English, Frisian and German) and also in an ‘Old Germanic’ sense – knowledge of Old Norse, Old English, Old High German, Old Frisian and Gothic were present in the group – students were able to benefit from each other’s knowledge. 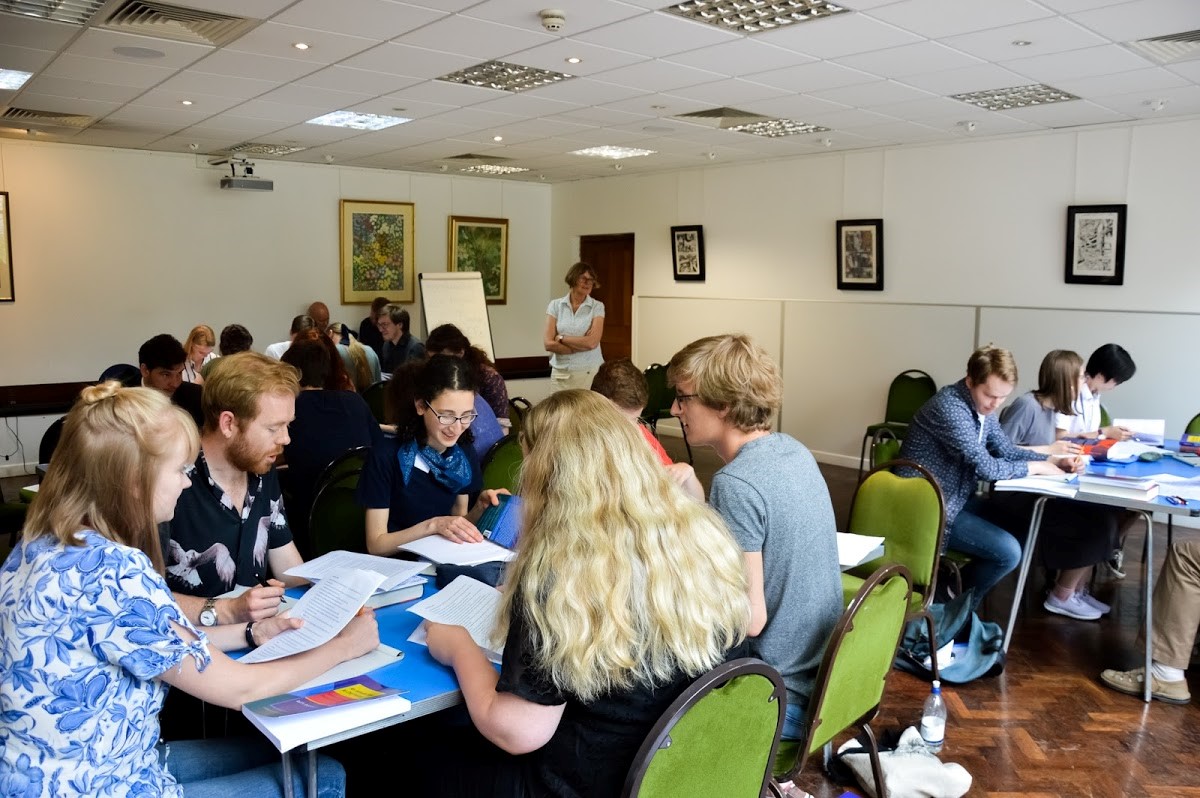 Prof. Nigel Palmer, Emeritus Professor of German Medieval and Linguistic Studies and Fellow  of St Edmund Hall, placed Old Frisian in a wider European context by introducing the 15 Signs of Doomsday, a text based on various Latin exemplars that circulated in Europe in the 13th century. In addition to the many extant medieval High and Low German versions of this text, there is one Old Frisian version. Students translated this into English in the translation workshop. Their English translation will appear on the Old Frisian Summer School website as one of the Summer School outcomes.

Delegates were shown round the Bodleian Library, the Taylor Institution Library and St Edmund Hall Old and New library, thus seeing the places where the Old Frisian manuscripts in the Junius and Marshall collections and Frisian items in the Alistair Campbell Collections are kept. 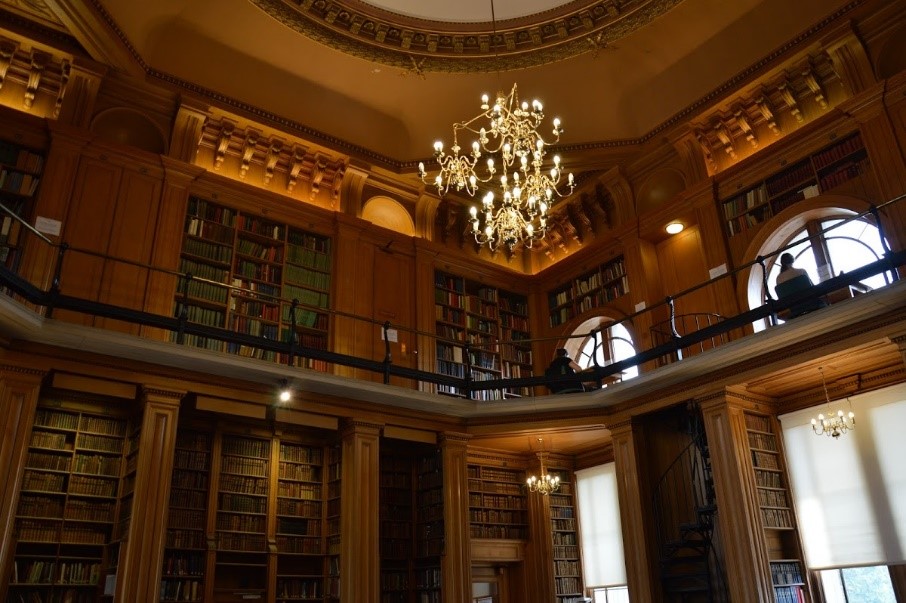 The public lectures on the Anglo-Frisian thesis in the Taylor Library were attended by a wider audience. Some came to see Alistair Campbell’s Frisian collection in the Taylorian. As Rawlinson and Bosworth Professor of Anglo-Saxon (1963-1974), Alistair Campbell had shown a great interest in Anglo-Frisian connections and was co-founder of the Frisian Academy.  Some items in the Taylorian collections bear witness of his contacts with other Old Frisian scholars. 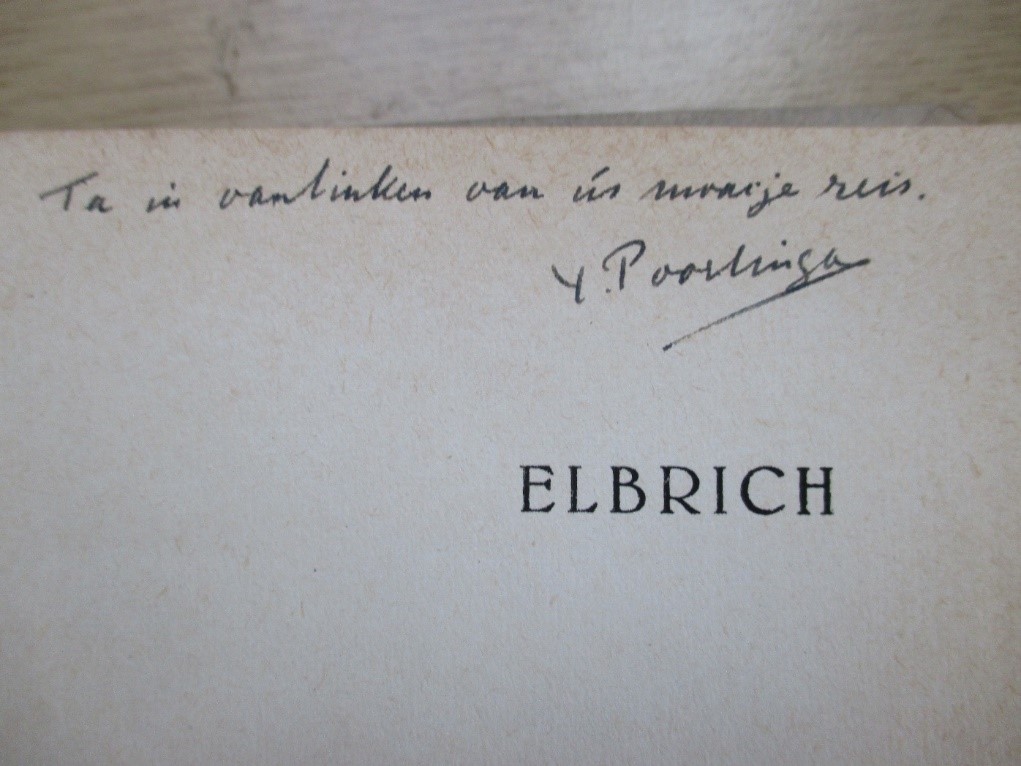 Students agreed that the summer school was intensive, but also a lot of fun, as proven by these photographs!

Evening in the Jericho Tavern

Prof Collins, Fellow of the Wine Cellar, leading the wine tasting in the Old Library in St Edmund Hall

The OFSS was the first event in the Oxford-Groningen partnership. Groningen University is traditionally the university in the Netherlands where Old Frisian is taught and the library at Groningen holds precious Old Frisian manuscripts, as does the Bodleian in Oxford. Nearly half of the delegates came from Groningen University, and next year it will be Groningen’s turn to organise the summer school. Hopefully, the OFSS will continue to be held on an annual basis in Oxford, Groningen or elsewhere. The spreading of knowledge of Old Frisian language and history should continue, ‘salang’t de wyn fan ‘e wolkens waait’ (as long as the wind blows from the clouds).

The OFSS could not have happened without the generous funding of TORCH International Partnership Fund and of TORCH Oxford Medieval Small Grants. Also, the studentships made available by the Faculties of Linguistics and of English have enabled some Oxford students to take part. Groningen University has also contributed in various ways, not least in allowing the Old Frisian lecturer Anne Popkema to co-organise the summer school. 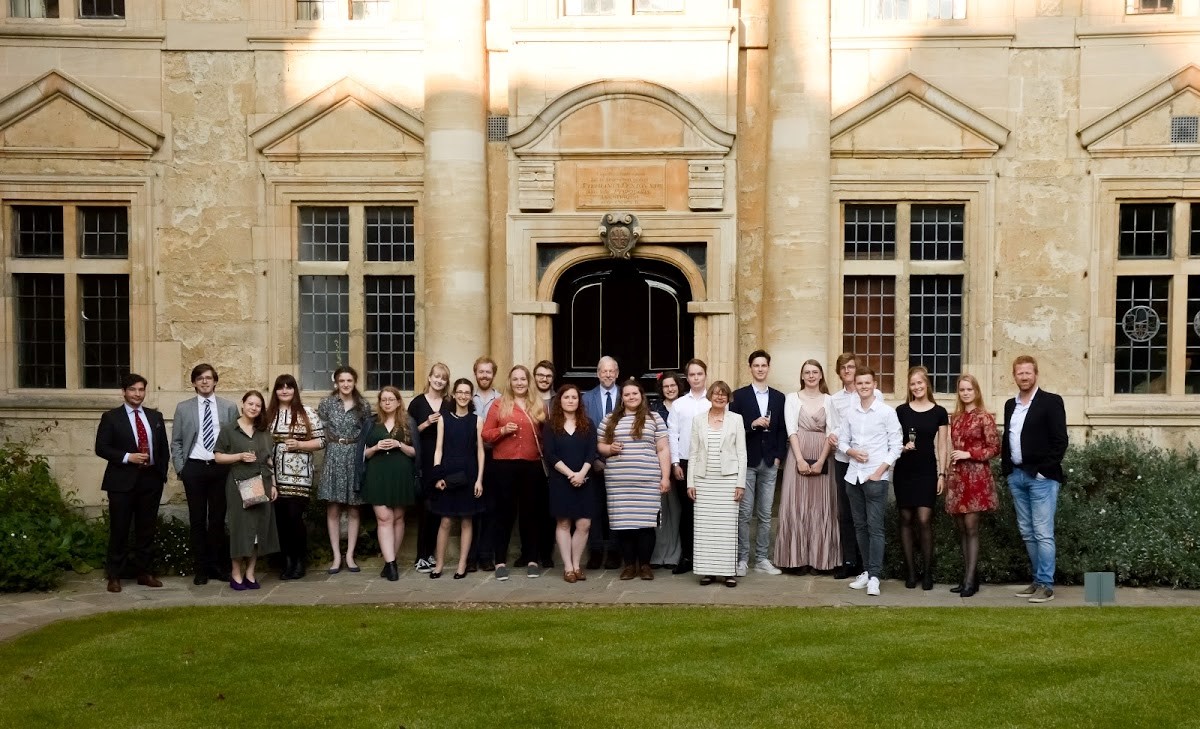 A number of students told me they wanted to come to the summer school again next year in Groningen. There will be a different special topic, as well as an opportunity to see the different manuscripts held by Groningen.