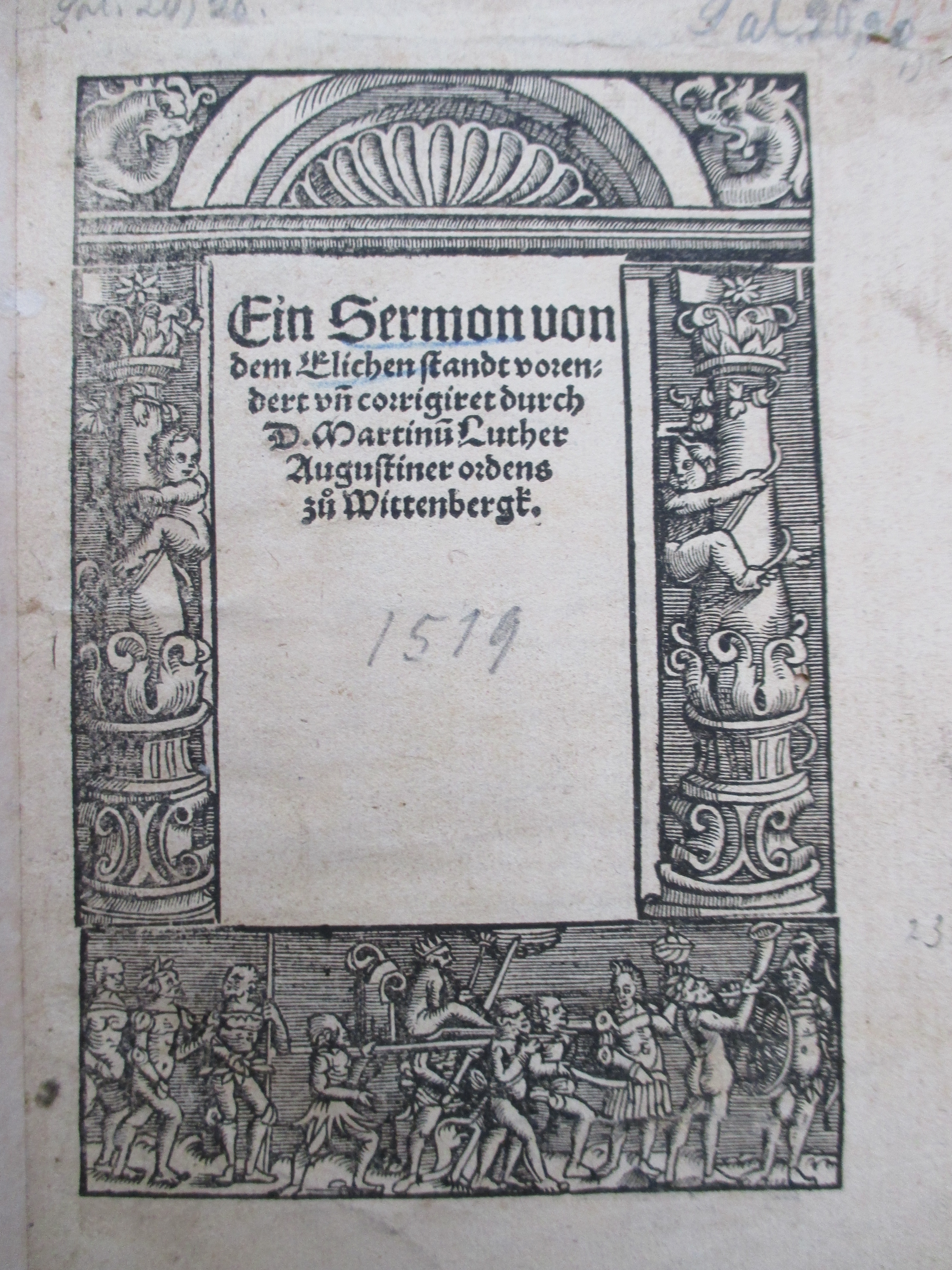 Martin Luther was one of the most important figures in the Protestant Reformation of the 16th century. His famous 95 theses, (possibly) posted on the gates of All Saints’ Church in Wittenberg almost 500 years ago, were  “trending” all over Europe within a few weeks of their original publication. In fact, he was a master of the communications technology of his day, quite possibly inventing the pamphlet as a means of communicating beyond scholarly circles, and using his prolific writing and the public support it generated to enormous effect. Small wonder then, that undergraduates studying his work today value the opportunity to see and touch the printed material that fuelled the Reformation.

The Taylor Institution Library is fortunate to have a large collection of Luther pamphlets and other publications. These were acquired in the 1870s on the recommendation of Friedrich Max Müller, the second Professor of Modern Languages at Oxford. Many of them came from Heidelberg University, which at the time was disposing of duplicates. Because of this history, we are able to offer them as teaching copies, and, with supervision, undergraduates are allowed to turn the pages, feel the paper, and as a result, gain a sense of how contemporary audiences encountered Luther’s writings.

Two groups of undergraduates recently had this experience at the Taylorian, guided by their academic supervisors, who have kindly allowed me to use my notes as the basis of this blog. The first group, from the History Faculty, had already studied the texts on display in translation. They noted the differences in the quality of the paper and print between volumes, the elaborateness of some title pages compared with the sparseness of others. 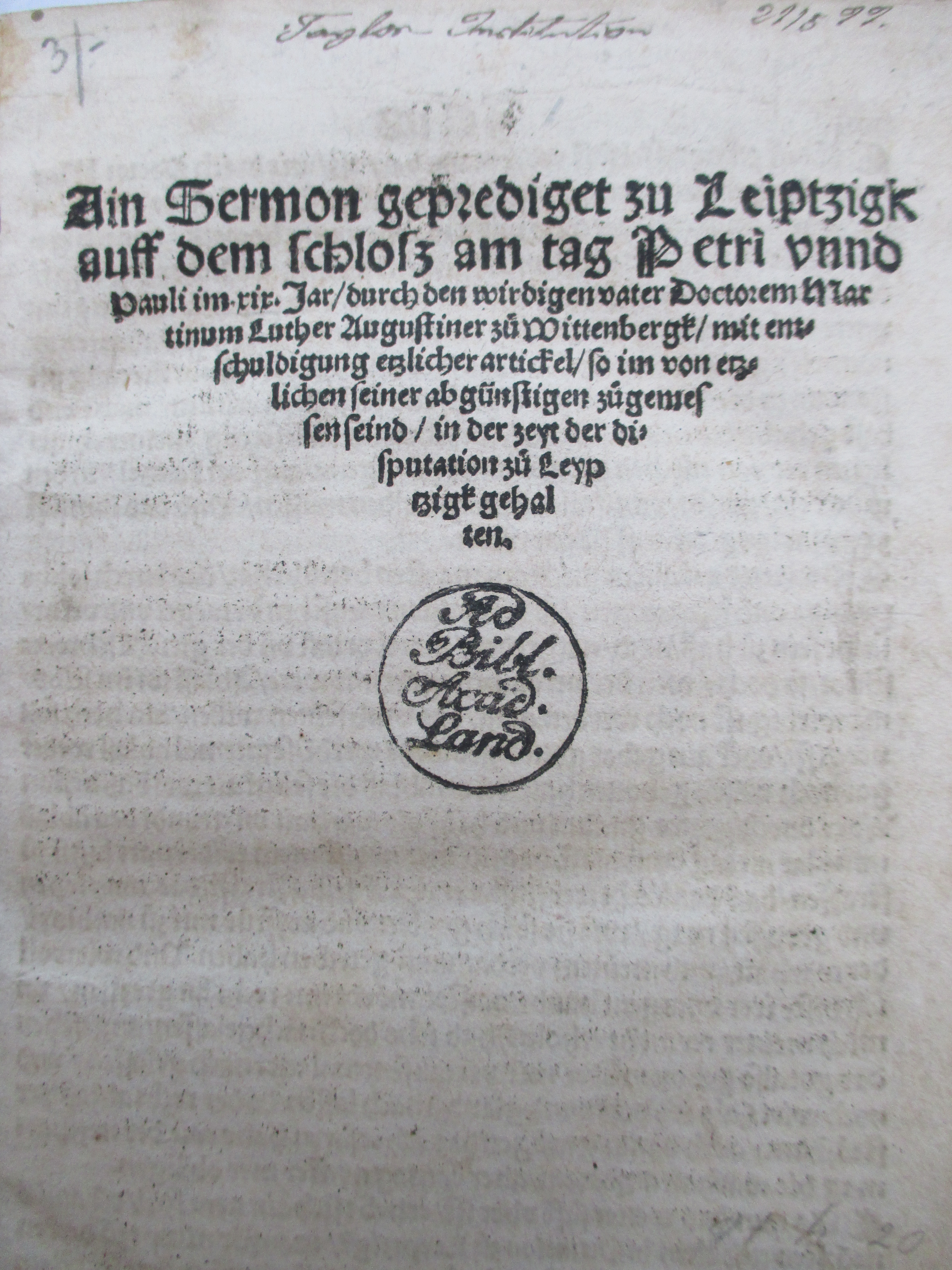 Unbound short pamphlets were not widespread until Luther made the form his own. Printers flocked to Wittenberg, which soon became a centre of printing, in large part due to the flow of content from Luther. Some specialised in printing his hymns, others in Bibles, while still others printed his pamphlets.

Another area of interest for this group was the network of buyers, sellers and producers of pirated copies which meant that Luther’s ideas spread so quickly across Europe. The average number of copies of a pamphlet printed at that time was about 1000. An initial print run of one of Luther’s pamphlets would be about 4000, and would be sold out in days. This was a money spinner to rival that of the printing of indulgences, which had been a steady income until Luther challenged the practice. However, as the selling of the pamphlets was illegal, it was often printers’ wives who were the undercover sales people.

The second group, students of German from the Modern Languages Faculty, looked at the same texts, but with a different focus. First of all they studied the title pages. Some of them were fairly plain, but others had allegorical meaning relating to the text inside, and their meaning would have been “read” by contemporaries along with the text. 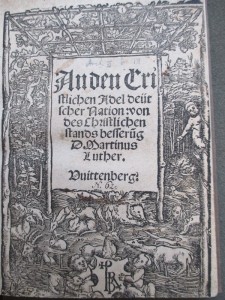 Allegorical title page showing the vine (Christ) providing a protective shelter over the idyllic society beneath, where lions and bears are living alongside rabbits, deer and lambs. Luther’s text calls on Christian nobility to take responsibility for building a Christian society.

One of the texts, Widder die hymelischen propheten: von den Bildern vnd Sacrament [1525] was written by Luther in response to the destruction of images in churches, which had been orchestrated by a former follower, Karlstadt. In it, Luther highlights the importance of images as an educational tool for those who are unable to read, and also points at the illustrations in his own publications, which were used by those bent on destroying images. Luther considered that hypocrisy. Luther himself valued images greatly, and used them in many publications. He was close friends with Cranach, a court artist, and this association with secular authority gave the publications prestige. 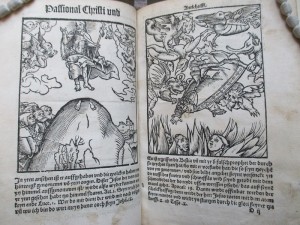 Images in Luther’s Passion of Christ, which were designed in Lucas Cranach’s workshop. Cranach was the leading artist of the Reformation

The group also considered the sheer quantity of Protestant writings. Luther wrote by far the most of all the reformers, but he was not alone in writing, and Catholics who resisted the reformation were unable to compete. They were partly hampered by writing in Latin, which was not accessible to such a wide audience. There was also a danger that in responding to a particular challenge from the reformers, they would have to give at least an outline of the reformers’ ideas, which could give them further publicity.

Finally, the undergraduates looked at a Luther Bible. They studied the title page, to see whether it gave any clues as to the nature of the Bible. They noted the handwriting on the facing page, which gives a list of births, showing that the Bible was being used as a family bible in the 17th Century. They noted that the book was printed in Lübeck.

This is in fact Luther’s Bible printed in Low German, and it predates Luther’s Saxon German Bible by a few months. It was prepared by Bugenhagen, sometimes called the second apostle of the North, who helped Luther with the translations for the Saxon German version, and then translated the whole thing to Low German, beating Luther to publication by a couple of months. This Bible is particularly important because its place of publication is a Hansa town, with all the trading and travel links that implies. This Bible travelled around the Baltic, and was influential in many translations into neighbouring languages.

All the undergraduates were extremely enthusiastic about this opportunity to encounter the texts as they would have been seen by contemporary audiences, and felt it had added a new dimension to their studies.

Getting to interact with archival material is, in my opinion, essential to any form of study to do with the sixteenth century, however cursory or superficial, and I felt that our visit at the Taylorian was a turning point in my Special Subject this term. Whilst online resources are invaluable for studying Lutheran texts, much is lost in online scans, and I feel that it’s a real privilege to have access to original texts, something which really makes it worthwhile to study somewhere like Oxford. (Max Long, undergraduate student.)

Several students discovered new things about the library – they were unaware that we had rare books, or that it was possible for undergraduates to request to see them. The seminar leaders were enthusiastic about being able to use the library’s collections to engage their students, and are actively looking for other opportunities to run similar sessions in the future.

As a librarian, I was delighted to see such enjoyment and enthusiasm being generated by our collections. It is a privilege to be able to offer that experience, and a reminder that we are far more than a museum of treasures. It was also a privilege to be able to be present at these seminars, and I would like to thank Dr Madeleine Brook of the Modern Languages Faculty, and DPhil Candidate Edmund Wareham of the History Faculty for making them possible, and for allowing them to become the subject of this blog.

Texts viewed by the undergraduates: