It is good to de-clutter your flat or house, but my mother who is 86 and has been living in St. Petersburg, Russia for most of her life, never considered the possibility. The result is that after years of collecting she has something of a museum in her flat. But it is not the antique shop you may be thinking of. People who returned to St Petersburg (then Leningrad) after the Second World War didn’t have many possessions and this is why they were reluctant to part with the things they acquired later.

During my visits to see my mother I feel like I’m using a time machine to go back to Soviet Russia, or the USSR – a country which doesn’t exist anymore.  Looking through old photos, documents, clothes and other items I tried to look at them as an artist and archivist: How can I interpret these simple but valuable objects to tell a story?

Readers at the Taylor Bodleian Slavonic & Modern Greek Library (TABS) have shown considerable interest in the reality of Soviet life during the past several years and this gave me the idea of creating an exhibition-installation of artefacts from that period. The topic for the first exhibition is “Soviet School” or “Soviet childhood”.

In this display you can find my original notebooks, cards, photos, pictures and a few toys from the late 1960s and 1970s. My mum kept them all!

In the 1st form group photo the girls are wearing dark dresses and white aprons, some with white ribbons, while the boys are dressed in dark suits. We all look serious because smiling wasn’t the done thing in school photos at that time. 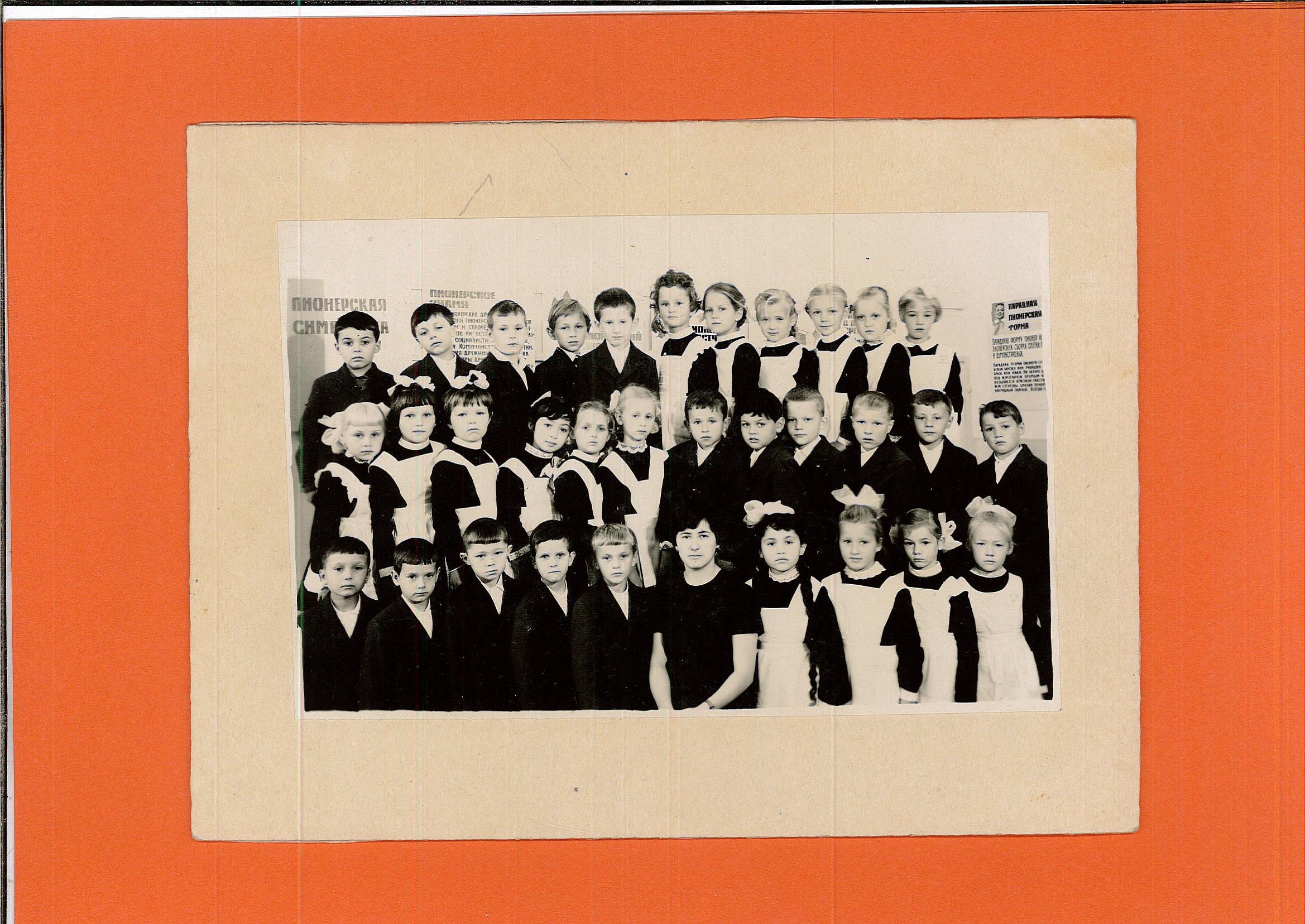 It was a strict system, learning how to write. All children had to go through hours and hours of practising their hooks, lines and loops. This is why some Russians have very similar handwriting. 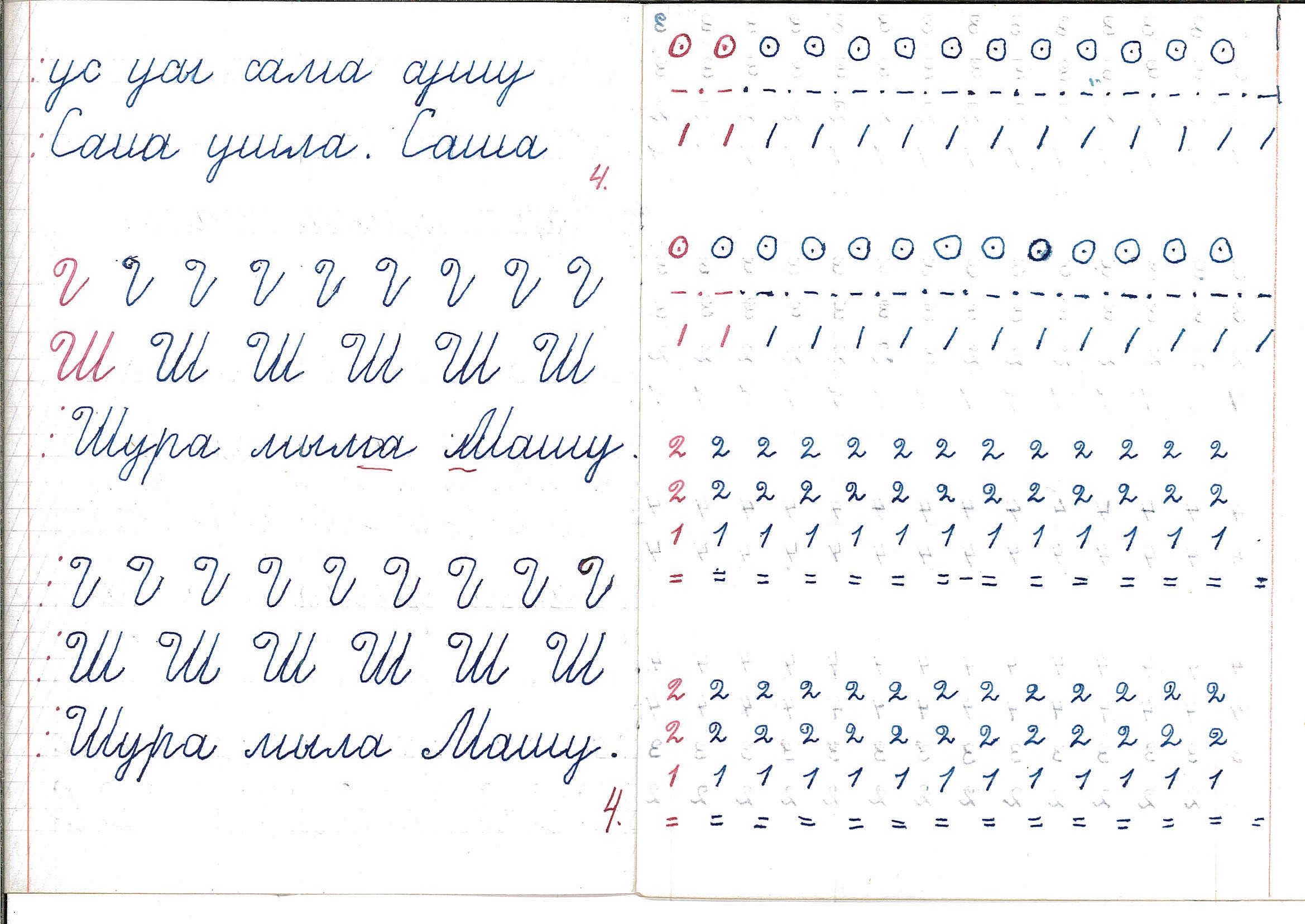 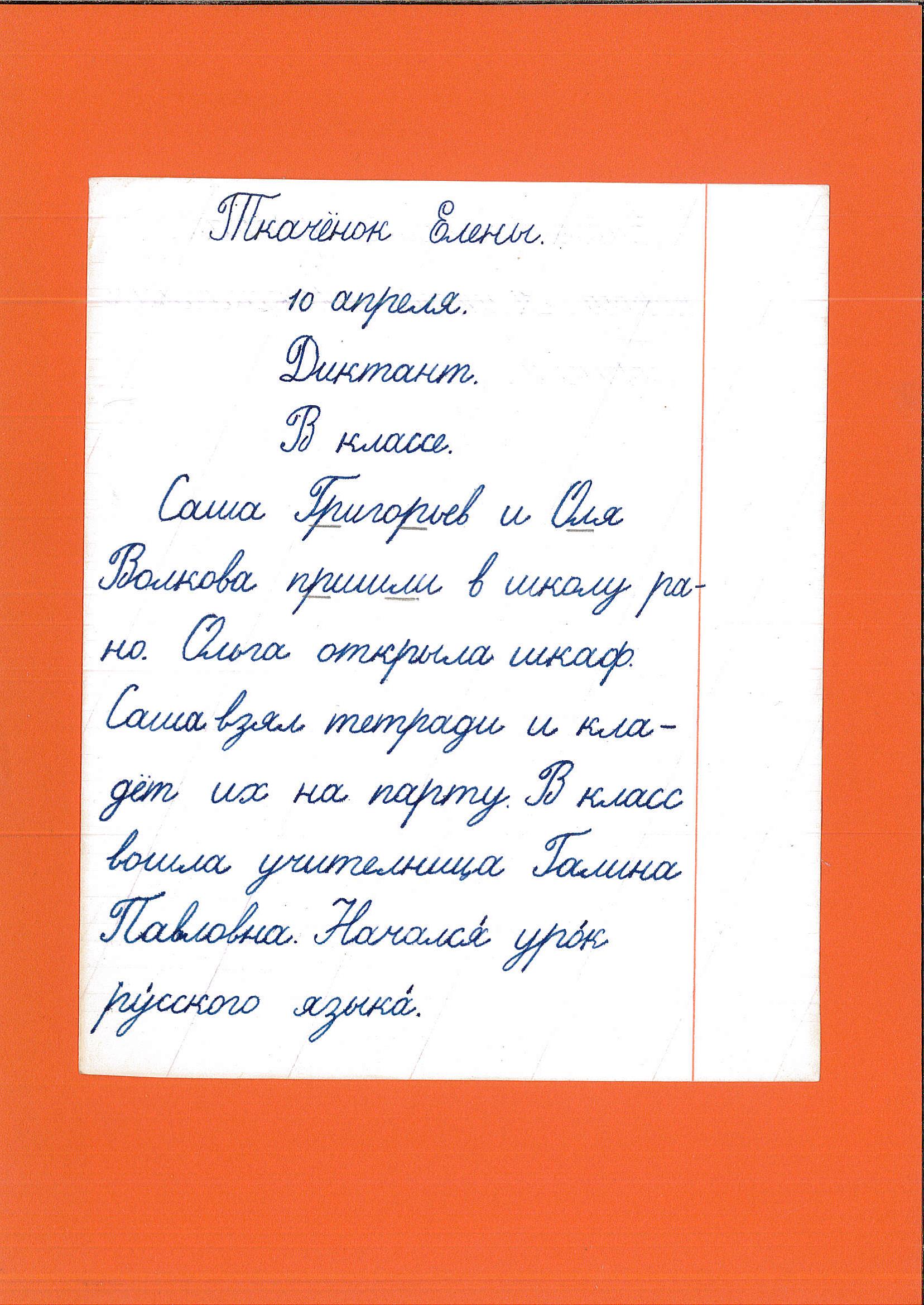 In the left-hand cabinet (shown below) is my oath before joining the Pioneer League, decorated with a portrait of Lenin; and a photo of the cruiser Aurora, whose signal started the October Revolution. During our first years at school we were called Octiabriata (the suffix “ata” means “little” like in kotiata – kittens). So we were little followers of the October Revolution and we called Lenin our grandfather. 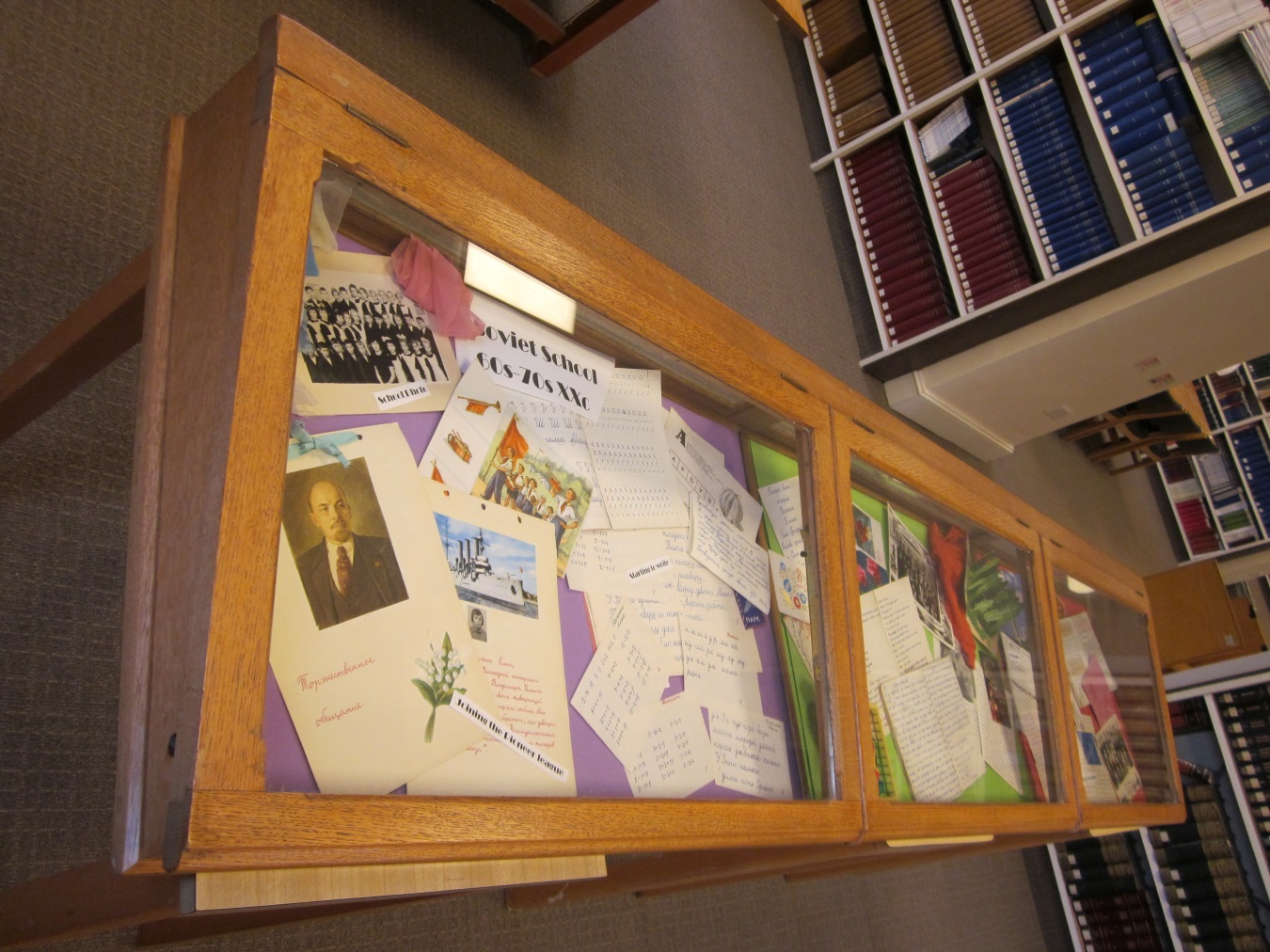 The next step was the Pioneer League, a more serious organisation. Pioneer meant “The First” so we had to show an example of good study and behaviour to all other children. Before joining we had to write, learn and say by heart the oath to ardently love our country, to live, learn and fight, as set out by Lenin and as taught by the Communist Party. 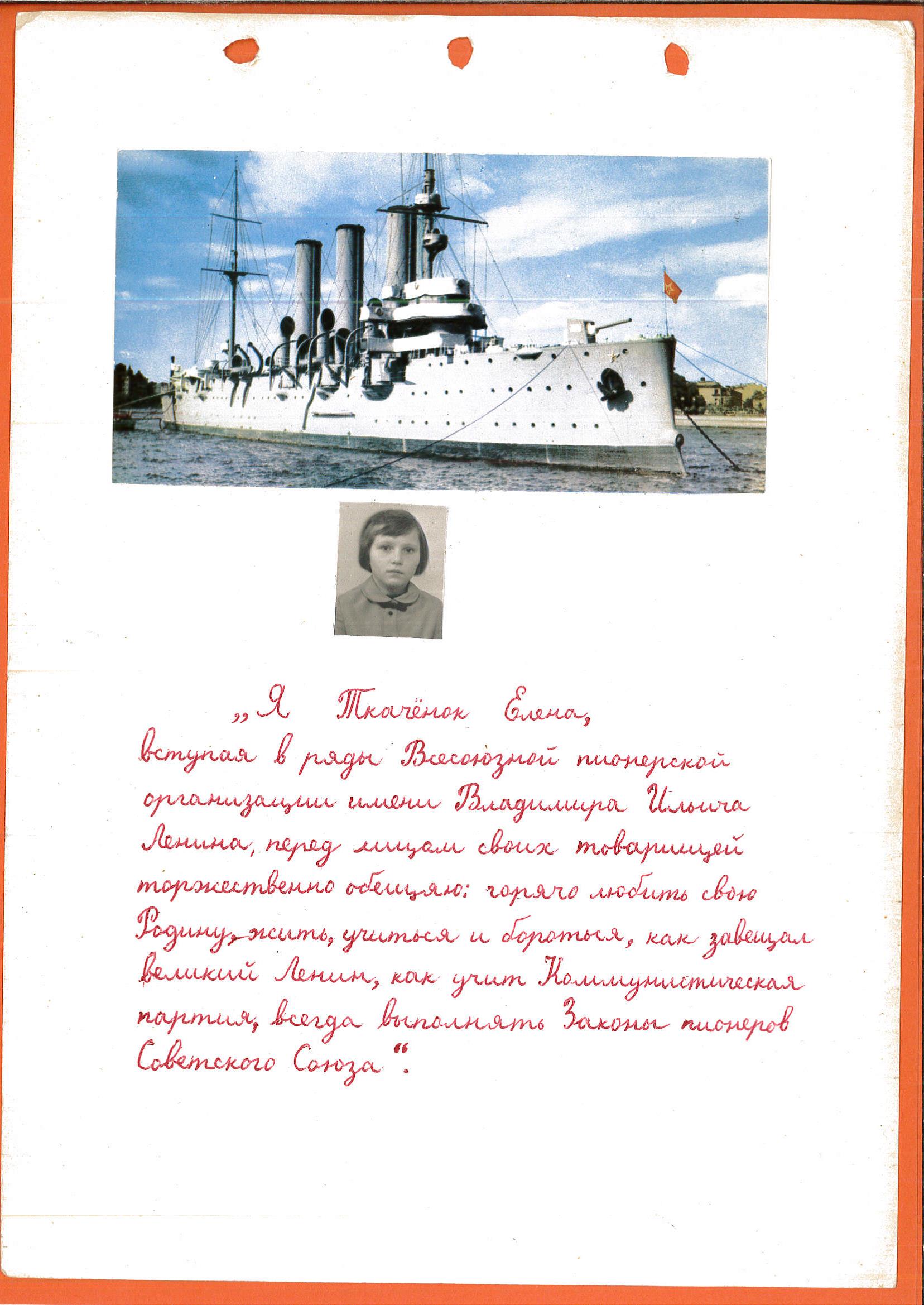 We had Pioneer rules as well. Here are just a few of them:

The idea for this youth organization was taken from the Scout movement, with the addition of communist principles. 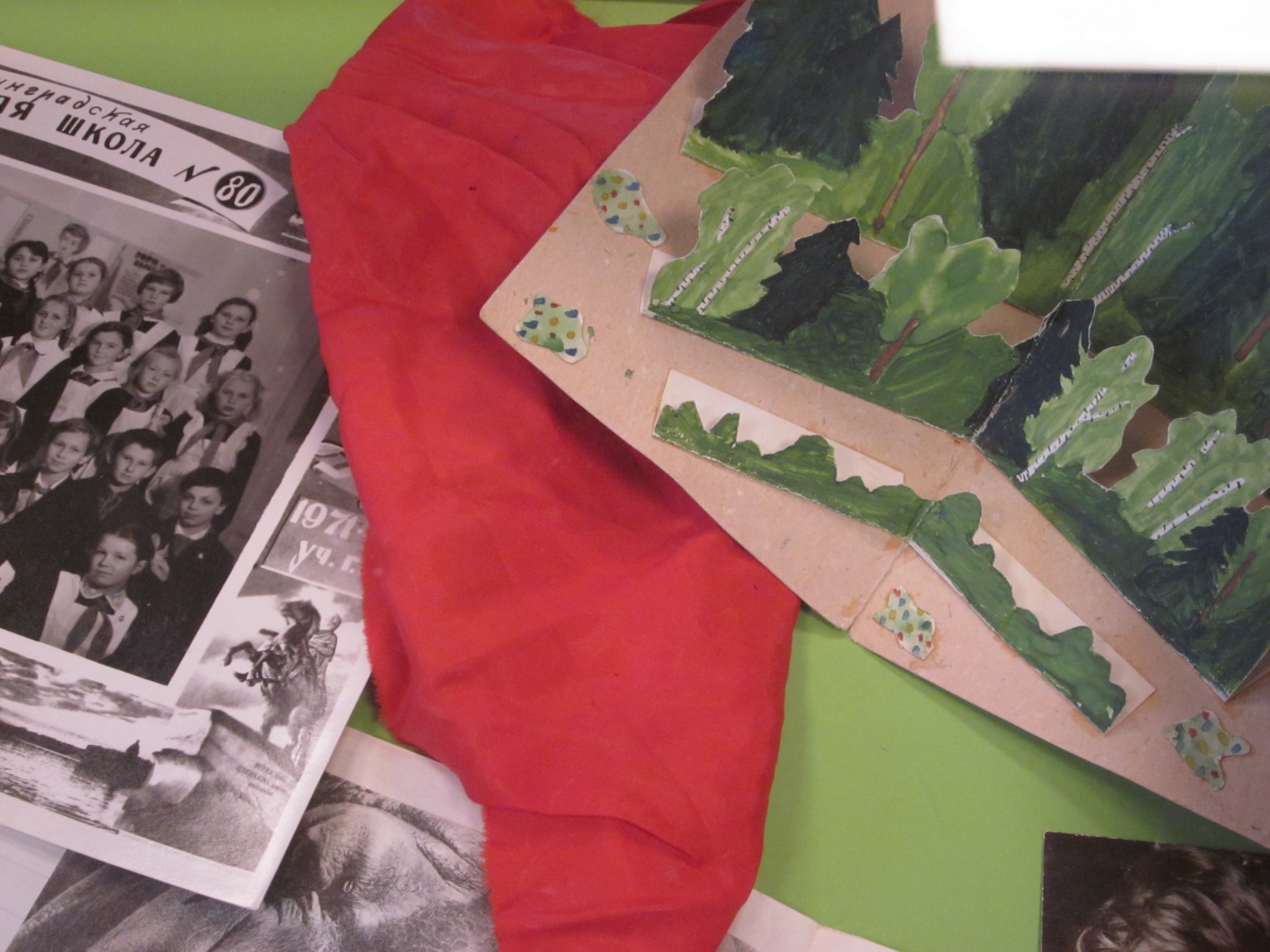 All Pioneers had to wear red ties and badges. On ordinary days girls were in black aprons and, for special occasions, white ones, as in our school photo. We stayed at the same school for 10 years, starting at seven years old and finishing at seventeen. Or uniform remained the same throughout.

During the last year I became a little bit rebellious so I stopped wearing an apron, as did some of my friends. In the photo below, am in the bottom row, far right. No smiles again! 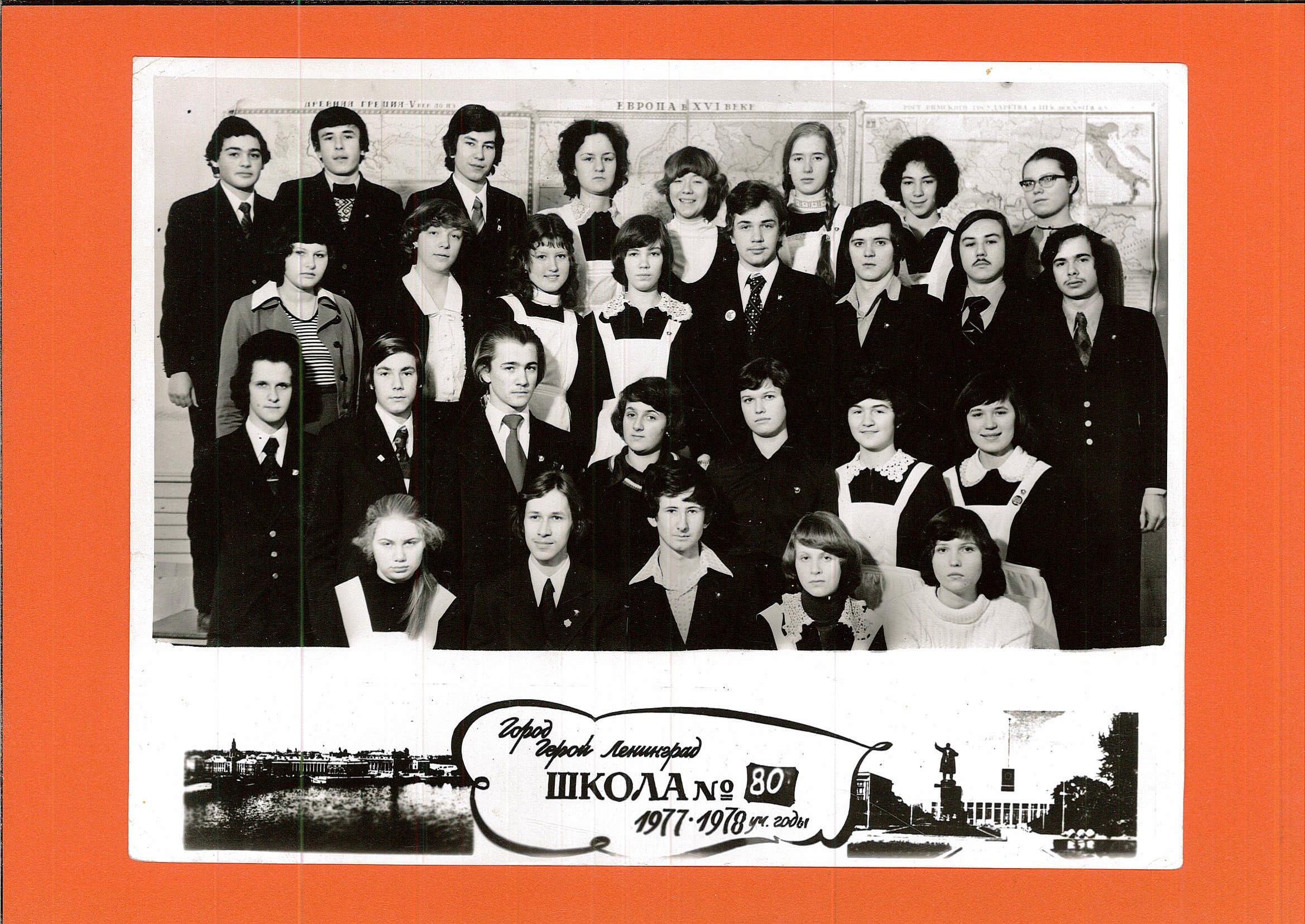 Next came the Komsomol League, joining which came very close to becoming a proper Communist Party member. A few boys in the above photograph are wearing a Komsomol member badge on their jackets. By this time we understood that it was only propaganda, nobody took it seriously, and we knew that we needed to be members of Komsomol to go to University. If you were not you could have problems with admissions.

As in all schools we had to study as well, which was a little bit of a chore. No computers, calculators or mobile phones at that time; just pens, paper, books, blackboard and an abacus. 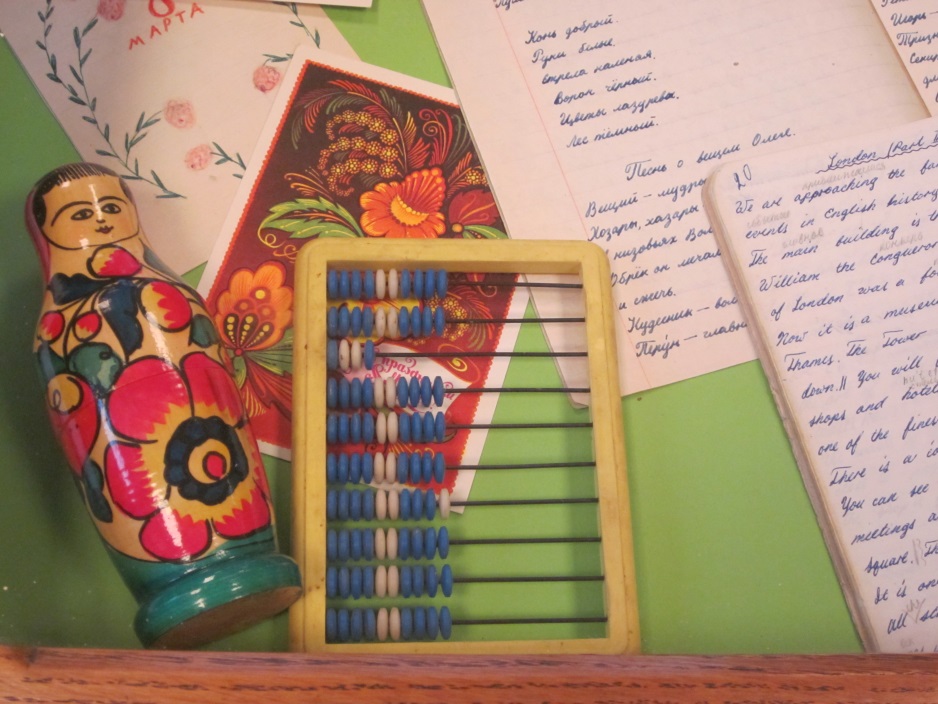 English was my favourite subject. Here (below) is my essay on “London”, a topic we had to write and learn about in 5th form (11-12 years old). Who knew that I would be living in London some time later, before moving to Oxford! 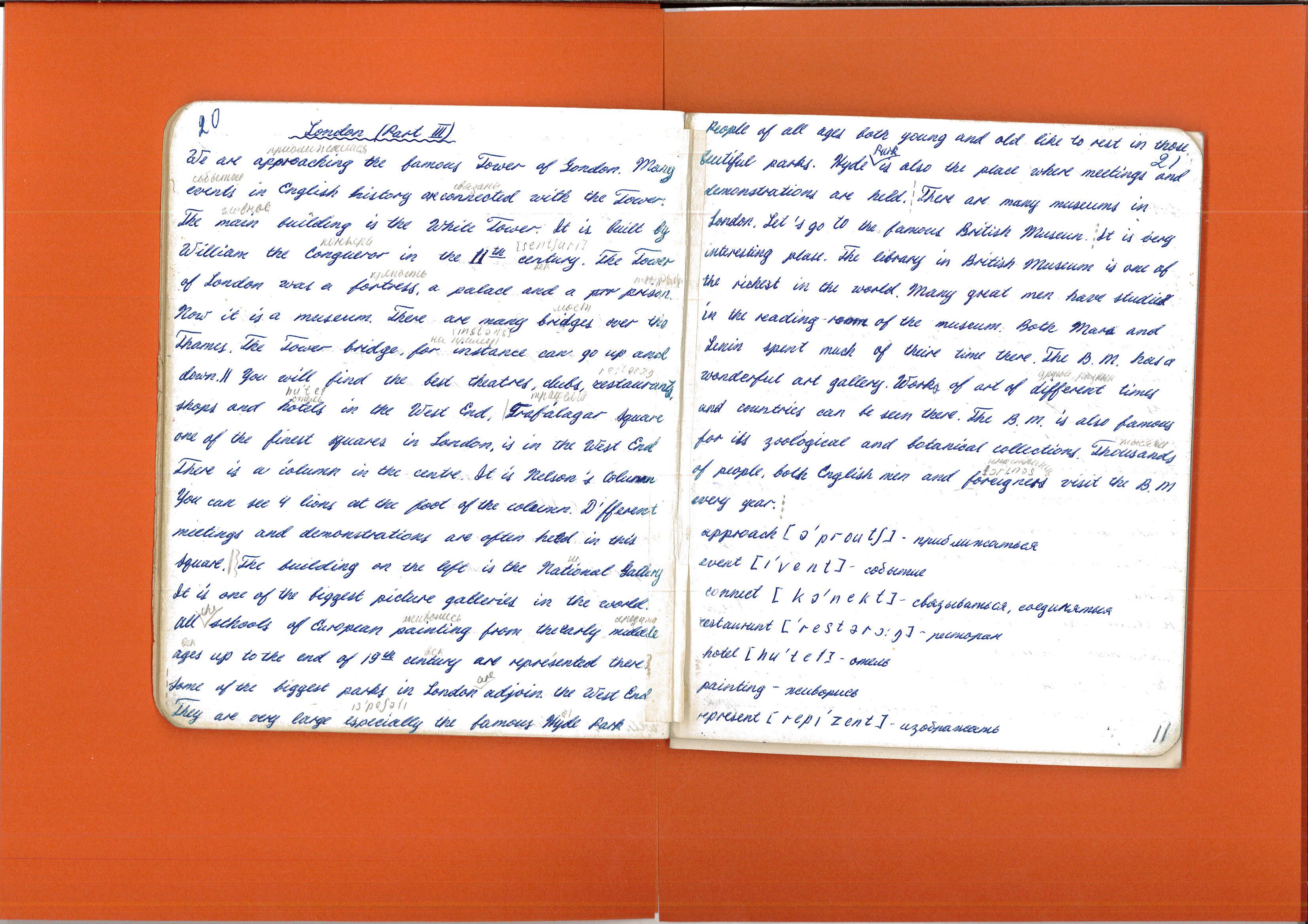 The curriculum was very intense and even Saturday was a day for studying. Recently, I had a nightmare that I was back in school and would not have my full weekends any more.

However, it wasn’t all hard work. We had some fun as well, and the best time was the summer holidays! Three months of freedom – from 31 May to 31 August. Children went to Pioneer camps or to their grandparents’ dachas or villages, so parents had some rest as well.  I’m still in touch with many of my classmates. Some of us are spread around the world now but we have Skype and e-mails so we stay connected.

Please  come and take a look at the Exhibition, and I will tell you more stories and anecdotes from the planet USSR.