How have our reading practices changed during Lockdown?

As somebody working with 20th century samizdat material for my doctoral thesis, I was surprised to find some of the most revealing answers to this question at an event centred round the  15cBOOKTRADE Project which took place in the Italian Embassy, London. In this blogpost I will reflect on the links between the printing and reading practices associated with 15th century booktrade and those of the later years of the GDR. 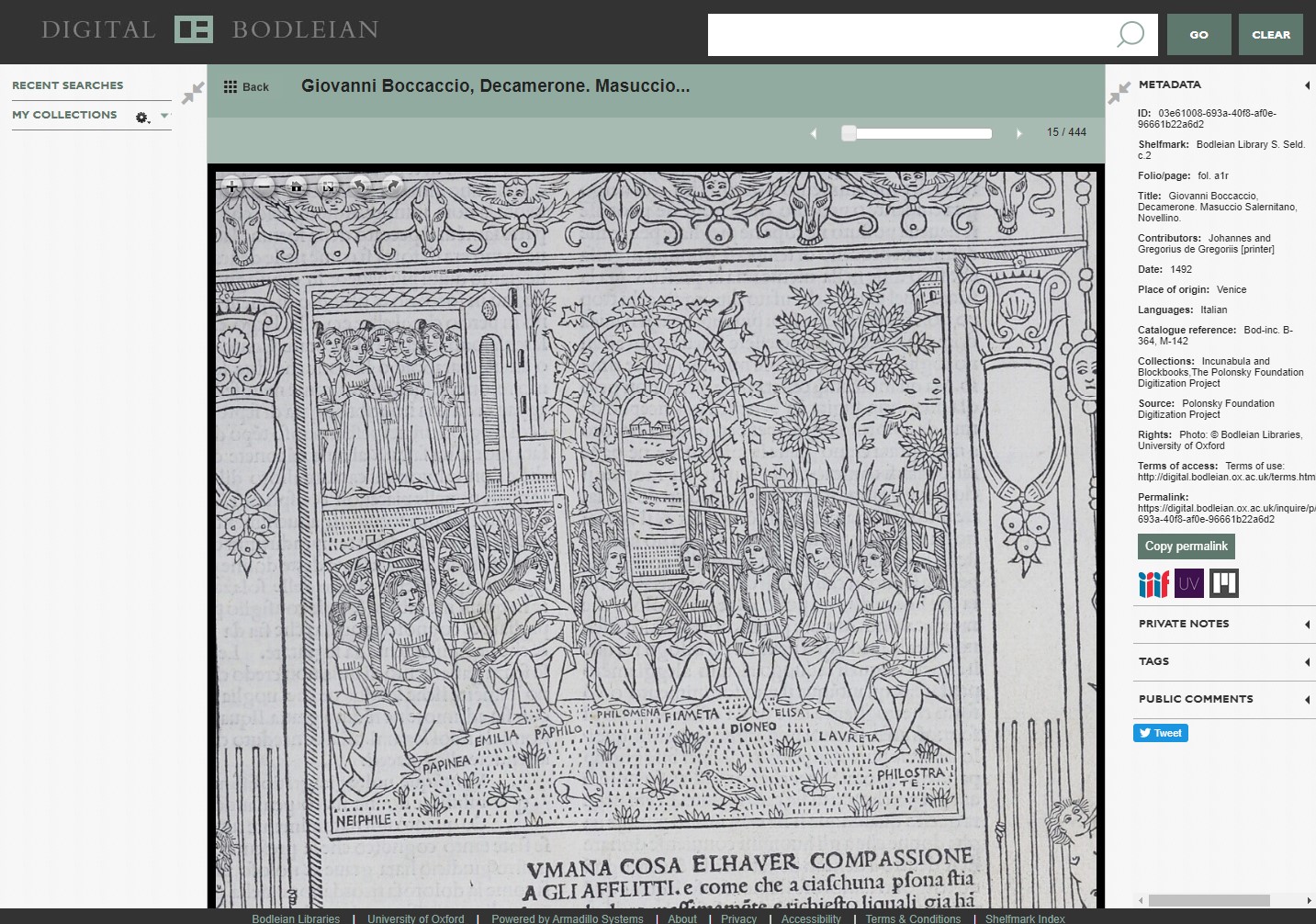 Over the last three months, we have seen the spirit of resilience and comradery fostered in communities across the world, supporting people through the adversity of the coronavirus pandemic. It would seem that the life advice Boccaccio imparted to us in the wake of the Black Death in his Decameron (1354), is still as apt as it ever was: “in our communities we can find solace”.

Written between 1348 and 1353, Giovanni Boccaccio’s Decameron contains stories told by a gathering of ten young people who had escaped to a villa outside Florence in order to flee the Black Death. Boccaccio’s frame story comprises a miscellany of tales: romantic, tragic and comedic, and ultimately offers a literary retreat from the pain and hardship of life in a time of plague. However, what emerges specifically from Boccaccio’s work is not just the importance of community, but also the curative power of literature.

For the characters in the Decameron, storytelling offered a moment of welcome reprieve from the difficulty of their life circumstances:

It behoveth us live merrily, nor hath any other occasion caused us flee from yonder miseries […] we shall pass away this sultry part of the day, not in gaming,–wherein the mind of one of the players must of necessity be troubled, without any great pleasure of the other or of those who look on, but in telling stories, which, one telling, may afford diversion to all the company who hearken.

Just as the characters in the Decameron came to each other and began storytelling in order to keep up morale, many members of the public today have turned to the creative arts once more to seek solace in this time of crisis. In the academic community, open-access online events have widened the scholastic community and created inclusive, virtual learning groups open to the public. Speaking at a recent webinar, Professor Cristina Dondi (Oakeshott Senior Research Fellow in the Humanities, Lincoln College, Oxford) noted that this movement towards wider educative inclusivity harkens back to key moments in the 15th century with the democratisation of learning through the era’s burgeoning international book. However, Dondi also reminded webinar attendees of how much further we must go in order to facilitate wider access to scholarly materials in archives.

As the Principal Investigator for the 15cBOOKTRADE Project at Oxford, Dondi was in the unique position of being able to offer insight into importance of the digitisation of historical texts. The aim of the project was to use the material evidence from thousands of surviving books from the 15th century to address five fundamental questions relating to the introduction of printing in the West. These questions included investigation of reading practices, the evaluation of the books’ contemporary market, the dissemination and visualisation of these texts, and finally, the use of illustrations.

For Dondi, and indeed many other academics, the coronavirus pandemic has highlighted the absolute necessity of digitisation of historical texts in order to create open-access learning communities befitting the social and academic developments of the 21st century.

‘The Dawn of Printing to Digital Access’
Circumnavigating current lockdown restrictions, the Italian embassy in London recently facilitated a webinar on ‘The Dawn of Printing to Digital Access: the benefits of making books available to everybody’. The event, hosted by Ambassador Trombetta and moderated by Jon Snow of Channel 4 News, brought together international experts engaged in promoting wider accessibility to books of historical and cultural significance (to read more about this project, follow the hashtag #ItalyRestArt). 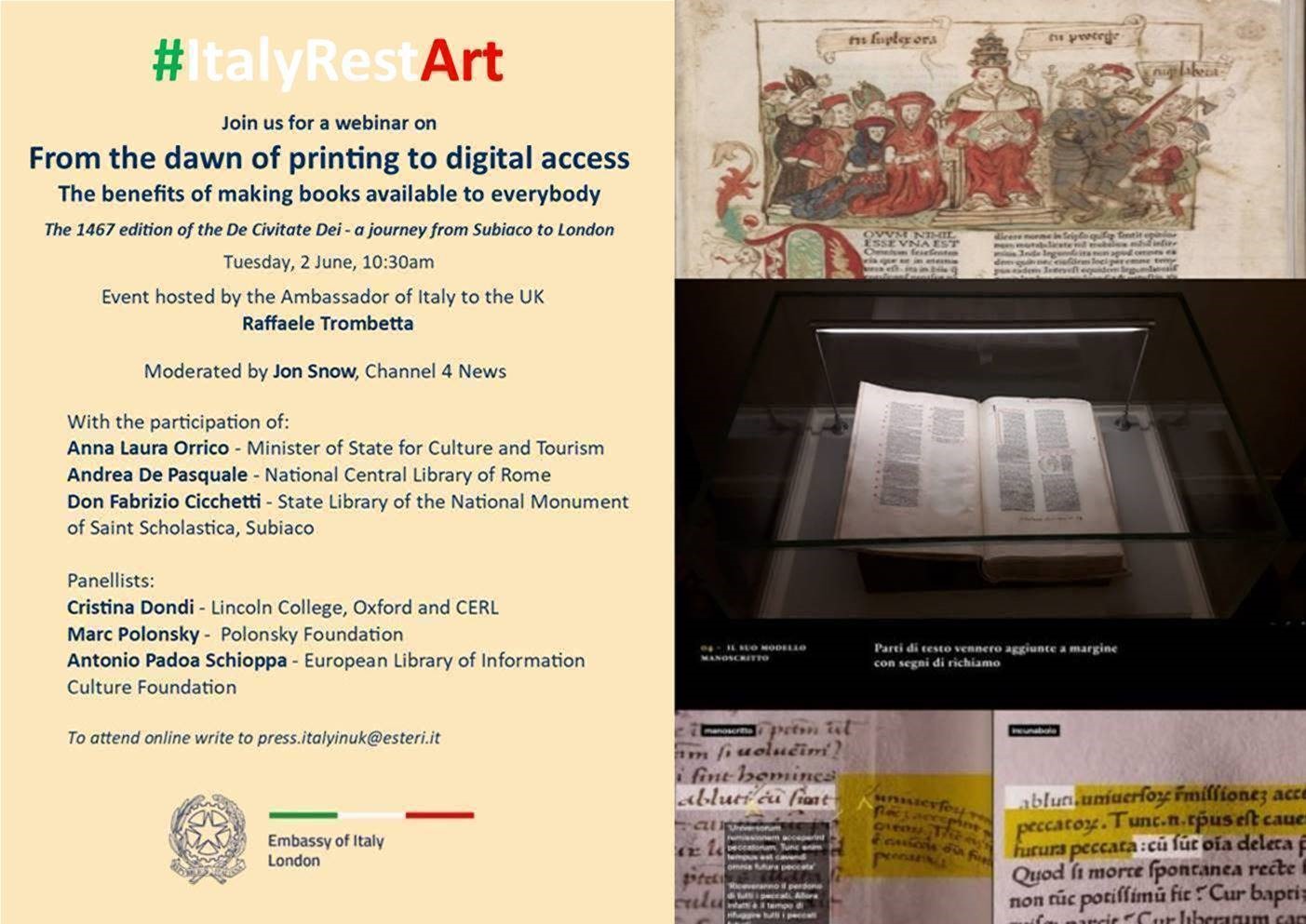 The webinar was focused on highlighting the progress of the digitisation of Italian incunables, while also looking to the future of digital access to historical books more generally. Organised into four main parts, the webinar opened with words of welcome from Jon Snow and His Excellency Ambassador Trombetta. This was followed by the introduction of previously recorded video statements from major players in the recent cultural preservation movement in Italy, featuring recorded messages from Anna Laura Orrico, Italian Minister of State for Culture and Tourism, and Andrea De Pasquale of the National Central Library of Rome. The third part of the webinar consisted of brief individual lectures from the panel in regard to their engagement with and promotion of digital access in their own fields. Among these panellists were Don Fabrizio Cicchetti, Antonio Padoa Schioppa and Prof. Cristina Dondi, who each offered insight into various aspects of digital preservation and access.

Representing the private foundation supporting this vital digitization of these texts, Marc Polonsky, of The Polonsky Foundation, shed light on the Foundation’s commitment to cultural preservation and wide dissemination. Polonsky credited the collaborative nature of the digitization project for fostering unique partnerships between project stakeholders from both the public and private sectors. According to Polonsky, this collaboration facilitated the establishment of high standards of best practice (both academically and technologically) which could be adopted as a developmental framework for future projects.

While each of these leaders related fascinating thoughts, it was Dondi’s lecture, however, that resonated with me the most. This was due to her inspiring engagement with the study of Material Culture, bringing the riches of cultural treasures not just to those in academia but also to the wider public.

Dondi began her talk by referencing the importance of developing resources that facilitate online access to research materials for precisely the moments in time when researchers cannot travel to archives and research libraries. Indeed, the current climate of the global pandemic is evidence for the necessity of accessible, transnational online learning resources.

In the last two years, the digitisation project of the Incunables of the Benedictine monastery of Santa Scolastica at Subiaco, the first printing place in Italy, a collaboration between the National Central Library in Rome and the Consortium of European Research Libraries (CERL) of which Dondi is the Secretary, however, made these Italian cultural treasures available online anywhere in the world at the push of a button. In doing as much, Dondi noted in her talk that for scholars of the incunables, the restrictions placed on archival research due to Lockdown have in this way been surmounted. For many undoubtedly grateful scholars, the online access to these materials will allow them to continue their research projects unhampered by the social and political upheaval around them. If this outcome were not applaudable enough, then the popularity of Dondi’s recent exhibition ‘Printing R-evolution and Society, 1450-1500. Fifty Years that changed Europe’ at the Museo Correr, Venice (September 2018-April 2019) has demonstrated just how vital digitisation work is for the wider public as for academia. This exhibition documented the impact of the printing revolution on the economic and social development of early modern Europe using hundreds of freely available digitizations from many European and American libraries.

‘Printing R-evolution’
A journey of discovery which used digital tools and innovative methods of communication, the exhibition presented data gathered by the 15cBOOKTRADE Project (University of Oxford) about the History of the Book. The exhibition highlighted how, already by the year 1500, millions of books circulated in Europe, not only for the elite, as often claimed, but for everyone, including a large production of schoolbooks. In those, first, decades, printing coincided with experimentation and enterprise. Printed books were the product of a new collaboration between various sectors of society: knowledge, technology, and commerce, with ideas spreading widely and quickly as never before.

Dondi’s close engagement with the study of material culture was of particular interest to me, as my doctoral project investigates the ‘unofficial’ literary scene of the GDR in the 1980s, specifically through in-depth case studies of magazines printed in a samizdat capacity.

By researching each of the magazines’ diverse literary content, the different ways in which these magazines were produced, and the readership practices that surrounded them, my thesis will offer insights into the creative self-expression of the East Berlin literary scene and examine whether this phenomenon can be understood as part of the wider samizdat movement seen in many Eastern bloc countries. My thesis explores what these magazines tell us about the function, possibilities and limitations associated with publication beyond print in a totalitarian regime.

Although my topic of research differs greatly from Dondi’s work in terms of historical era and social circumstances, in essence both areas of research are fundamentally preoccupied with the same investigative question: what can the physical form of the book reveal about the people behind its printing?

In the scholarly community, as in many other sectors in society, academics have had to adjust their ordinary methods of research in order to continue with their projects.

Working From Home and using online learning tools have helped educators create an academic space (albeit, a virtual one) in this time of crisis. Attending webinars such as Dondi’s ‘The Dawn of Printing to Digital Access’, where international experts shared their knowledge and supported each other and the wider scholastic community allowed myself, and doubtless many other academics, to use our time in isolation fruitfully and thoughtfully. It would seem, therefore, that despite all changes and disruptions, many of us, like in the time of Boccaccio, have taken refuge in our communities, the stories and studies that we hold dear, as we continue to go on learning in the time of Lockdown.