from Alexandra Marraccini. Alex is a PhD student in the History of Art at the University of Chicago. Her work focuses on alchemical/Hermetic images and their role in constructing Early Modern intellectual history. She is currently doing doctoral research and is a visiting member of Corpus Christi College.


For scholars in the Weston’s Rare Books & Manuscripts Reading Room, catalogue entries are our northernmost stars, the fixed constellations by which we arrange our research. My work typically considers alchemical and hermetic images in the Library’s Ashmole fond, and I can remember to the day and hour when I found the entry for each of my manuscripts in the fond catalogue. There they were, set in a rounded Victorian type and sometimes annotated by a neat scholar’s hand, each the promise of beauty or mystery or truth, each known but still inscrutable, until each manuscript came into my hands and unfurled onto my desk. If this language sounds swoony and romantic it is, because the experience of working with manuscripts truly is transformative; it is history at its must tangible, piercing immediacy, cradled in your own hands.

Of course, there are more prosaic days too. On just one such day, I was bent over MS. Ashmole 1423, dancing silently at my desk to Taylor Swift’s “Blank Space” and staring at a clumped-up bit of 16th-century English handwriting. Fun pop songs are some of my favourite paleographic instruments, and I can often be found swaying along in my grey and pink noise-cancelling headphones at the long readers’ tables. There was a weird ligature, and then, a rather fateful email. Following an earlier discussion about my work on the Ripley Scrolls, Dr. Bruce Barker-Benfield, curator of medieval manuscripts here at the Bodleian, now told me about an Hermetic scroll that needed a description. It had been given to the Bodleian with the papers of E. M. Bickersteth and his family in 1976, but its mysterious contents had since then defied cataloguing. I was invited to take a look. 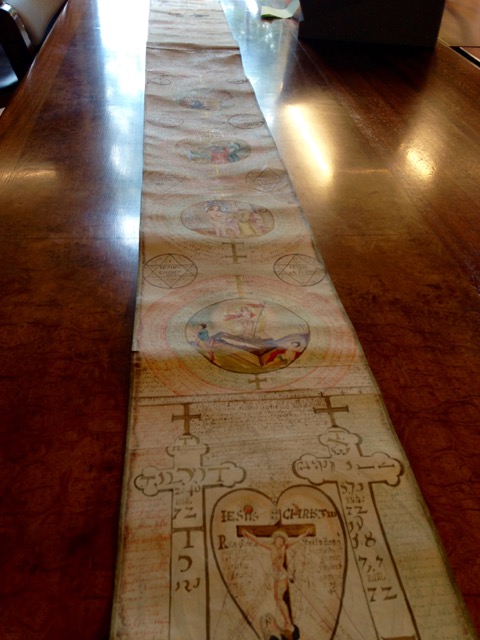 Shortly thereafter, one of the Bodleian’s grey storage boxes emerged from the circulation desk with my name on it. I was ecstatic but also nervous. A manuscript like this, a known unknown, is a rara avis indeed in this day and age. I unfurled it, all twelve feet of it, and gasped. Many manuscripts are beautiful. Many manuscripts are strange. This one is both. One side has stunning roundels of the genealogy of the Prophets starting with Old Testament creation and ending with Christ. There is dense ink, covering almost the whole of the writing surface, in black-brown, green, and red inks, in both German and Latin. The roundels are surrounded with angelic sigils, like those in the Clavicula Salomonis, and the back of the scroll is decorated as well, this time with dense fields of sigils, some of which bear signs of repeated touch and use. The Ripley Scrolls I work with at the Library have no illumination on their backs. The other comparanda in magical books (MS. Rawl. D. 252, MS. e Mus. 173, MS. Rawl. D. 253, and MS. Douce 116) aren’t even scrolls at all. This object is, to my knowledge, a total unicum.

For the uninitiated (in this case, perhaps literally), sigils are geometric symbols designed to call the angelic (or demonic) spirits from the heavens. Sigil comes from the Latin sigillum, which explains why many are round like the wax seals on letters. The sigils on the Bickersteth scroll usually appear in bound magical books called grimoires, some of which were on display in the Magical Books exhibition in the Bodleian in 2013. Some of the sigils on the back of the scroll appear to be worn down and perhaps damaged by oil, used to float and rotate a divining crystal along the surface. The sigils are also often round and with multiple tiers of directional writing because angelic magic is calibrated by both geography and the calendar, with certain months, times, and places being more suited to some angels than others. Sometimes a brass bowl filled with water is used to catch the incoming spirit. 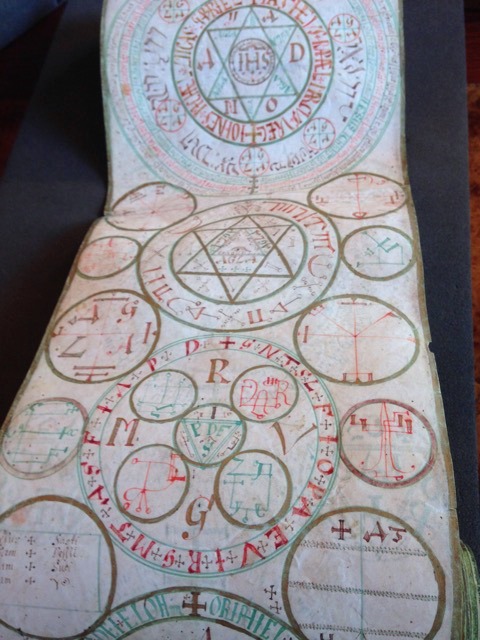 The important thing to remember about magical scrolls like this one, though, is not the fact that they are magic. The strange looking symbols are exciting to look at, but what’s exciting about them intellectually is that they’re experiments with the warp and weft of language, of how it evokes, sometimes literally, aspects of the micro- and macro-cosm. While the images and the bulk of the text on the scroll are typically later 17th-century or after, and decidedly German in content and style, some of the sigils are not. They come from a diverse range of print sources including the works of John Dee, showing that Hermetic theologians in the period were transmitting crucial ideas across Continental/English boundaries. When Dr. Barker-Benfield and I met to discuss the manuscript, he held the scroll up to the window facing Parks Road. The light showed us what a table-bound viewing could not: the sigils on the back lined up in significant ways with the images on the front.

This is one of the most delightful aspects of book and manuscript studies. Somewhere like the Bodleian’s Weston Library, which is a temple to the historical, and by nature, old, is also a crucible for the new. My experience with the Bickersteth angelological scroll is by no means unique. Scholars make new discoveries here every day. While my scholarly article with a description of the manuscript is still forthcoming, soon a summary entry will go up online on the Weston/Bodleian catalogue website with the shelfmark MS. German f. 5 (R). A new star will blink into being, and a hundred years from now, another graduate student, just like me, can use it to guide her work, to enter the realm of the old that is always somehow new.

As for me? Well, I’ll be in the Reading Room, glowing from the experience of having been able to contribute in my small way to the catalogue, and listening to “Blank Space” on repeat. After all, I got to live the lyrics, at least with respect to this manuscript. Taylor Swift perkily croons: “I can show you incredible things/ Magic. Madness. Heaven. Sin.” I now have the pleasure of being able to say the same thing.