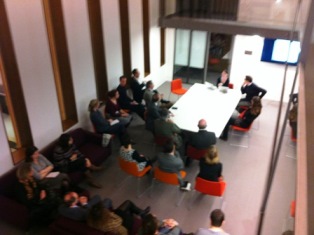 Dennis Duncan (British Academy Postdoctoral Fellow at the Bodleian Libraries, Centre for the Study of the Book) has embarked on a three-year project to write the history of the book index from late medieval times to the present. Dr Duncan presented to the seminar an early-modern instance of the index used as a weapon of character assassination in 1698 when Richard Bentley was satirized by critics deploring his painstaking philology. An item from Bodleian collections, T. B. Macaulay’s heavily and intemperately annotated copy of Charles Boyle’s attack on Bentley, highlighted the continued fear of the index as a potential distortion, rather than distillation, of knowledge.

Claire Gallien (Université Paul Valéry – Montpellier 3, and BSECS-Bodleian Fellow, 2014) is extending her work on English Orientalism* to a close study of the manuscript collections which informed 17th- and 18th-century scholarship. Working with the Bodleian Oriental manuscript collections, she will be examining the contribution these materials made to English understanding of the Middle East and of Arabic literature throughout the cycle of collection, from their acquisition to their reading and annotation by English scholars.

Mirjam Brusius (Mellon Postdoctoral Fellow in the History of Photography, Oxford) is building on her research into the origins of photography* with further examination of the role of photography in historical and archaeological study during the 19th and early 20th centuries. Her presentation to the seminar focussed on the early history of photography in Iran, outlining in that context the adoption of the technology (notably by the Shah, Nasser al-Din) and the adaptation of aesthetics to the production of photographic records of the Middle East in the middle of the 19th century, including albums produced by European visitors which have survived in library and museum collections.