On Monday 11 October 2021 in the Bodleian’s Weston Library for Special Collections there will be a race between The Oxford Scribes , the Bodleian Bibliographical Press, and the Centre for Digital Scholarship.

This webpage, script-print-code.info, tells the story.

This is a chance to compare script, print, and electronic text encoding side-by-side, in real time. The text will be written in manuscript, printed in movable type, and encoded by three teams, starting at 1pm.

In this blogpost we’ll report on the progress and the thoughts of the scribes, printers and encoders as they work through the same text, a portion of Psalm 107 (‘… They that go down to the sea in ships …’), to create a published version, in one or many copies.

Onlookers are welcome in Blackwell Hall, the main public foyer of the Weston Library on Broad Street, Oxford.

The event is in honour of the start of the Lyell Lectures 2021, The Genesis, Life, and Afterlife of the Gutenberg Bible, which will be given by Paul S. Needham, beginning on 11 October 2021. Details in the event listing include links to watch the livestream of these lectures. The lectures will be recorded and will be available a short time after the conclusion of the series, at https://visit.bodleian.ox.ac.uk/event/the-lyell-lectures

A webpage showing many digitized copies of the Gutenberg Bible, for comparison, is available here.

Here is the webpage for this event: 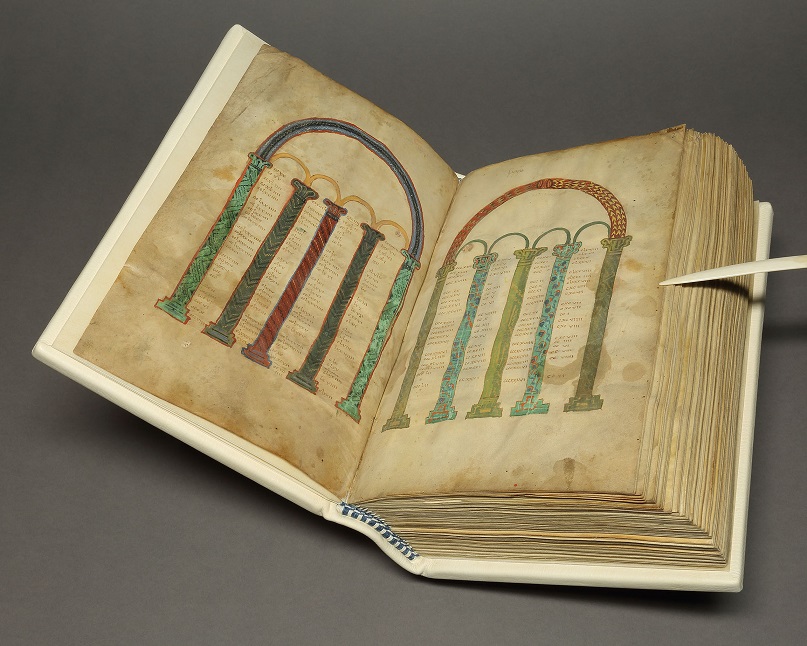 Marking International Kelmscott Press Day on Saturday 26 June 2021, Bodleian Special Collections are counting some of the ways that William Morris’s knowledge and love of the book arts has contributed to library collections and expertise, up to the present day. (For more on this topic, join a lecture by Laura Cleaver, co-hosted online by the William Morris Society UK and the Institute of English Studies, University of London, ‘Medieval Manuscripts and Private Presses: William Morris and his Followers as Collectors and Creators of Books c. 1891-1914.’)

Morris’s devotion to book design was a deciding factor in the establishment of the Kelmscott Press, and this History of Reynard the Foxe (1892), reprinted from William Caxton, is one of the editions inspiring the forthcoming exhibition, ‘North Sea Crossings’, which will open at the Weston Library in November. But the influence of Morris is present in less visible ways, too.

Morris’s interest in the crafts of book making also included bookbinding and his work with T.J. Cobden-Sanderson (1840-1922) and the Doves Bindery, and his designs for the de-luxe binding of the Kelmscott Chaucer (1896) are well known. Much less well known is the profound influence that his choice of materials would have on future developments in book conservation and the rebinding of medieval parchment manuscripts. Described by Sydney Cockerell (1867-1962) in June 1896 as “a specially-designed binding which has been executed in white pigskin […] inside the skin are oak boards”, the choice of medieval bookbinding materials for the Kelmscott Chaucer was not obvious or entirely approved of by Cobden-Sanderson. Although Morris designed the binding in consultation with Cobden-Sanderson, the work was carried out by Douglas Cockerell (1870-1945) who in turn became the most important binder of his generation. His later conservation and rebinding of the Codex Siniaticus for the British Museum Library in 1935, with oak boards and alum-tawed goatskin, drew upon lessons learnt from the Kelmscott Chaucer and would set the standard for manuscript rebinding and be copied by others for many years. Assisting Cockerell with Codex Siniaticus was Roger Powell (1896-1990), another towering figure in the development of book conservation who would further refine the techniques for rebinding parchment manuscripts with his pioneering work on the Book of Kells for Trinity College, Dublin in 1953 – again bound with oak boards and alum-tawed skins. Powell in turn greatly influenced Chris Clarkson (1938-2017) who worked with him in the late 1960s. Clarkson would later become instrumental in the establishment of the Bodleian’s Conservation Section in the late 1970s and would further refine the techniques of rebinding manuscripts through close observation and appreciation of the structural qualities of surviving medieval bindings. Clarkson trained, encouraged and influenced many book conservators (and many at Bodley) and his approaches continue to be used and developed at the Bodleian today. MS. Laud Lat. 102, a ninth-century manuscript from Fulda, was recently expertly conserved and rebound in oak boards covered with alum-tawed calfskin by Sabina Pugh – the latest in the line reaching back to Morris.

Morris took an active role in the craft of book making. One statement of this commitment was given in the lecture, ‘On the woodcuts of Gothic books,’ available to read online from the William Morris Online Archive,

I cannot help feeling that it would be a good thing for artists who consider designing part of their province (I admit there are very few such artists) to learn the art of wood-engraving, which, up to a certain point, is a far from difficult art; at any rate for those who have the kind of eyes suitable for the work. I do not mean that they should necessarily always cut their own designs, but that they should be able to cut them. They would thus learn what the real capacities of the art are…

Peter Lawrence‘s ‘Engraver’s Gallery’ (2015), featured in a 3D rendition in the digital repository Cabinet, is a recent acquisition to the Rare Books collection which featured in a 2019 display ‘Thinking Inside the Box’. This tiny matchbox work repays close inspection. The cover features Morris in the act of wood-engraving (after the drawing by Edward Burne-Jones), shavings scattering around him, as we imagine, in an homage from one wood-engraver to another.

An engaged interest in the craft of making books as a way to appreciate them better, and to learn about the arts of earlier book designers, is the guiding principle of the Bodleian’s Bibliographical Press, where students, schools, and the public can undertake their own experiments to learn ‘the real capacities’ of the arts of printing.

Libraries and literary institutions around the world in 2019 marked 200 years since Herman Melville’s birth with readings and conferences appreciating his work. At Bodleian Special Collections we took the opportunity to call again on letterpress printers around the world, who provided Shakespeare’s Sonnets in 2016, to celebrate Melville in similar fashion.

The text was a section of Moby-Dick often overlooked by readers, part of the preliminaries in which Melville introduces the multifarious themes of the work. Eighty extracts are arranged approximately chronologically.  Melville writes of his fictional sub-sub-librarian: ‘this mere painstaking burrower and grubworm … appears to have gone through the long Vaticans and street-stalls of the earth, picking up whatever random allusions to whales he could anyways find in any book.’ And yet, stealthily, these extracts of everything from the Bible to ‘Nantucket songs’ build a dramatic foreshadowing of the destiny of Ishmael and his shipmates.

They bear testimony to the value of collections encompassing a wide variety of texts — devotional works, learned legal treatises, great literature and sea shanties. To join its copy of the first (London) edition published under the title The Whale, the Bodleian now holds a new, collective, version of this section of Melville’s famous novel.

The bulk of the prints received are reproduced here. It is impossible to convey in digital images the quality of the craft and the satisfying variety of the physical items received.  One detail must stand for the excellence of these pieces; it is from Richard Kegler’s Extract 13.

In addition to printing using various methods (see No. 49) and materials (see No. 13), the printers have incorporated into their works (sometimes literally, see No. 63) the publishing history of Moby-Dick, the ecological crisis of the oceans, awareness of historical racism and the dangerous pace of human exploitation of natural resources on land and in the oceans. Melville’s choice of sources did not go beyond the publication year of the novel in 1851, but many of the themes remain current. To update the ‘Extracts,’ the Bodleian gladly accepted an offer from the volunteers of The National Museum of Computing, to print additional ‘Extracts’ about whales, using their collection of 20th-century printers.

The first extract, from the St James Park Press, begins the series with the title, ‘Moby Dick Extracts’.

57. ‘The papers were brought in, and we saw in the Berlin Gazette that whales had been introduced on the stage there.’ – Eckermann’s Conversations with Goethe. // Patrick Goossens, Letter-kunde , Antwerp.

79. ‘So be cheery, my lads, let your hearts never fail, / While the bold harpooneer is striking the whale!’ – Nantucket Song. // Arie Koelewyn, The Paper Airplane Press, East Lansing, MI. One version of the verse is here: http://ballads.bodleian.ox.ac.uk/view/edition/24312

Post-1851 ‘Extracts’  An exciting offer came from the volunteers at the National Museum of Computing, offering prints from a variety of newer machines:  a 1940s German Lorenz teleprinter, a 1980s ICL computer line printer, and a Braille printer. This offer inspired the library to bring the extracts up to date in 2019, with additional quotations from Rachel Carson’s book, The Sea Around Us (1951), and from  M.P. Simmonds, “Evaluating the Welfare Implications of Climate Change for Cetaceans,” in A. Butterworth (ed.), 2017, Marine Mammal Welfare (17th edition).

A Braille whale – or Whaille.

Film of the 1980s ICL Line Printer, from The National Museum of Computing

A display at the Bodleian’s Weston Library for Special Collections in November 2019 marked the arrival of this new collection to the Bodleian. 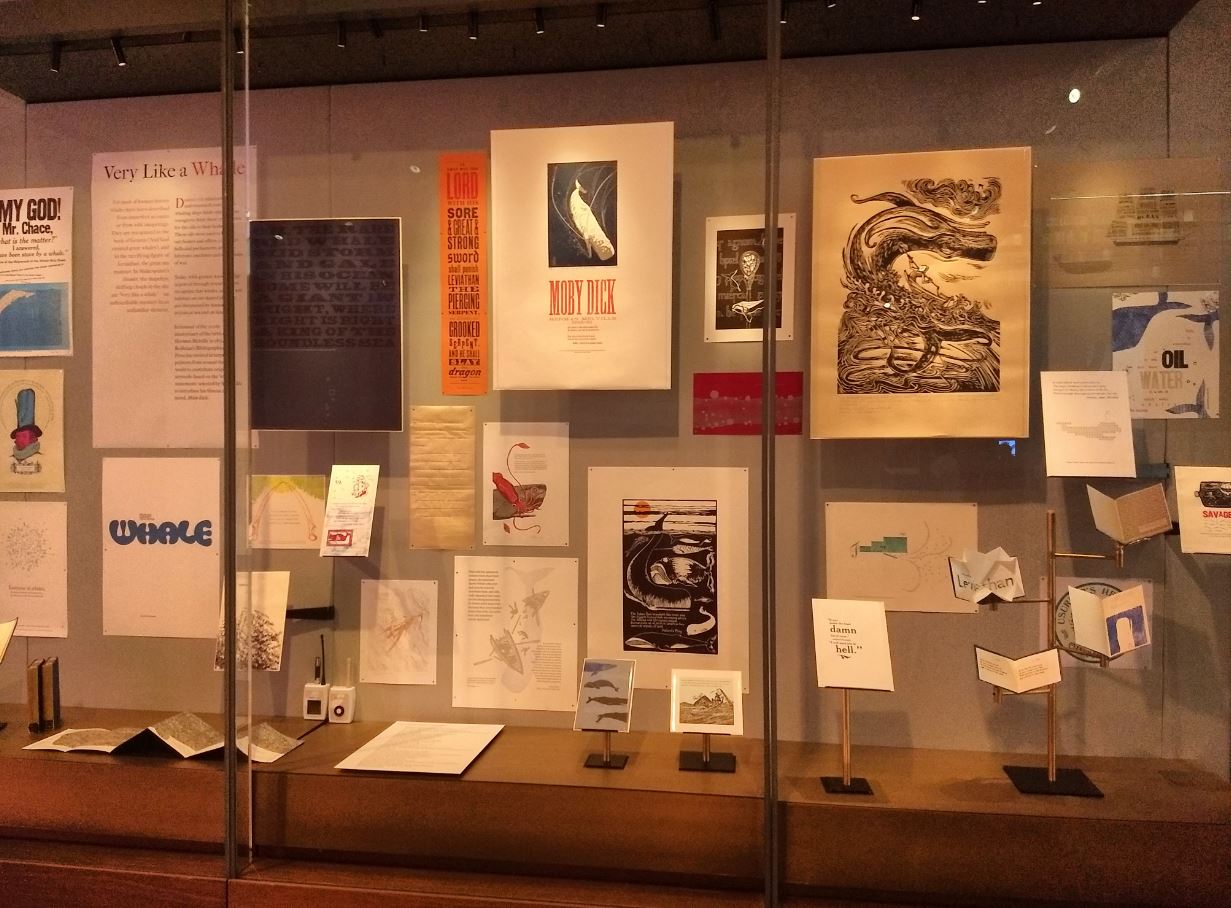 The Victorians used a technique called ‘nature printing’ to reproduce the details of leaves, plants, and other flat things like lace. This relies on pressing the specimen into soft metal (lead) to make an impression like a footprint of the item, and then making an electrotype of that impression in a harder metal, such as copper. The prints are produced with the intaglio method, in which the ink sits in the impressed areas and is forced into contact with the paper by the high pressure of the rolling press. This contrasts with relief printing, in which ink sits on top of raised lines. Here we have printed directly from the soft lead plate into which the leaf was impressed; the fine details on this lead plate will only last for a couple of impressions, though, before becoming smoothed down by the pressure as it goes through the press.

Some examples of nature printing in Bodleian Libraries collections: