We are delighted to announce that digital images of over a hundred key manuscripts for the New Testament in Greek at the Bodleian Library are now available through the New Testament Virtual Manuscript Room (NTVMR), hosted by the University of Münster. The research team at the Institute for New Testament Textual Research (INTF) has scanned and transcribed archival microfilms and historic photographs of these collection items.

The NTVMR is an online open collaborative research environment focusing on the textual criticism and research of Greek New Testament manuscripts. The Institute for New Testament Textual Research conceived this platform and continues its development.

There are over 5,600 known Greek New Testament manuscripts. Approximately ninety per cent of these have images available on the NTVMR. The platform was initially designed for editing critical editions of the Greek New Testament, in particular the Editio Critica Maior (ECM). It is open access, which means that anyone with an email address can create an account and begin customizing their own workspace and creating their own projects.

Although the NTVMR hosts high-resolution colour images from many institutions, most of its images are from black and white microfilm resulting from photography expeditions undertaken by INTF staff in the 1960s through 1980s. The new Digital Bodleian image licensing terms waive the former requirement to apply for permission to reproduce Bodleian imagery for non-commercial purposes. This allows the NTVMR to display these images without restrictions under the Creative Commons Attribution-NonCommercial (CC BY-NC) licence.

About 122 manuscripts of the New Testament in Greek, or portions thereof, are housed at the Bodleian, many of which have microfilm available in the NTVMR. Digital Orientalist has published an overview of NTVMR. For questions about the NTVMR, contact Greg Paulson.

Bodleian Library Publishing are delighted to announce the release of 548 scans of historical publications from the Bodleian and other University of Oxford libraries on HathiTrust. HathiTrust is a partnership of university libraries to preserve digital scans of printed collections. Our release makes over 250 collection guides, catalogues, exhibition books, and histories to which the Bodleian Libraries are rights holders open-access throughout the world.

Highlights of the Bodleian collection

The Bodleian publications now available to read on HathiTrust are especially helpful for researching the manuscripts, archives, and rare books that now form the library’s special collections. While most of our catalogues are now accessed primarily in digital forms, many readers overlook introductory printed guides. You can now read The Bodleian Library: A Subject Guide to the Collections (2004) for an overview of the system, or R.W. Hunt’s introduction to the library’s intricate system of shelfmarks in the first volume of the Summary Catalogue (1953). For recreation, you might simply browse photos of the Bodleian in the early 1950s.

Commonwealth and African archives and manuscripts

We are grateful to everyone who made this project possible: Andrew Dunning, Samuel Fanous, Sarah Barkla, Ruth Mallalieu, Beth Gibbs, and Martin Kauffmann. We also thank our colleagues at Oxford University Press, who printed our books before the formation of Bodleian Library Publishing and supported this project.

re-blogged and updated from the Bodleian Ballads blog, 2012

2021: Updating the discovery of detachable woodblock hats in Bodleian broadside ballads, we’ve had a printing block made with the detachable hat, and a matching hat for the woman pictured on the same ballad sheet, ‘Unconstant Phillis’.

The idea of applying image-matching software to the illustrations within the broadside ballad collection occurred to Giles Bergel in 2011. Under a John Fell Foundation-funded pilot project in that year Dr Bergel, in partnership with the Bodleian Library, asked Professor Andrew Zisserman of the Visual Geometry Group at Oxford to test their pioneering technology on a sample of broadside ballads. 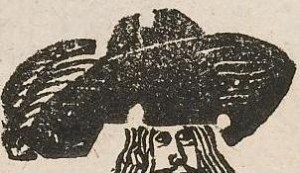 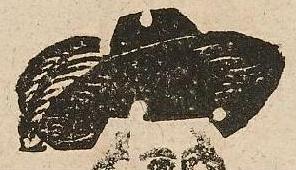 The first step was to obtain high-quality images. A sample of 800 ballads dating from the seventeenth century was chosen: this was the period when ballads were most typically illustrated, with a combination of commissioned and stock images. Photography, carried-out by the Bodleian’s Imaging Services studio, was funded with a grant from the John Fell Fund. High-quality colour images (600 DPI, 24-bit) were the result: these are now mounted within the current Ballads database and replace some of the older, lower-quality bitonal images which the Bodleian is hoping to fully replace.
Relja Arandjelovic at the Visual Geometry Group processed the new images and built a test site to demonstrate the image matching. The results were impressive: the pilot proved that software can match woodcut images on multiple printings, in varying conditions. The software, still under development, will be migrated to a new Bodleian Broadside Ballads interface under the current JISC-funded project.

What does “image match” offer to researchers?

Researchers working with ballads quickly notice that the same or similar woodblock-printed illustrations appear on multiple broadsides. The same hand-holding couple appears time and again on ballads of love; the same ships decorate songs of naval battles; the same cityscape appears, surprisingly, in ballads about London and Troy. And sometimes the same illustrations appeared in early modern English books and pamphlets, too. (See A guide to English illustrated books, 1536-1603, by Ruth Samson Luborsky and Elizabeth Ingram).

The repetition of generic illustrations in this way is often derided as evidence of ballads’ lowly status, but (as well as providing evidence for popular iconography), for early-modern bibliographic detectives, the re-use of woodblocks provides evidence for the date of a ballad’s printing: deterioration of  a woodblock might be a way to establish a timeline of broadsides that share the same illustration.

But there are other questions to be answered, sometimes questions we didn’t even know we needed to ask, which could be answered by selection portions of woodcut printed images: like, ‘Where DID you get that hat?’ 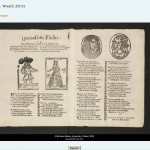 A ballad sheet in the image matching test site 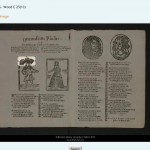 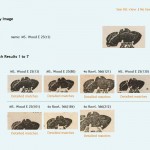 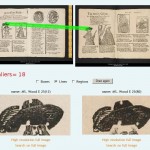 Different men, same hat, even the same wormholes: evidently the HAT is a woodblock with a life of its own 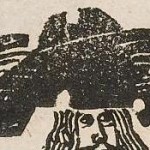 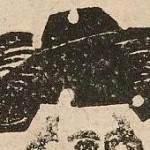 Theodor Mommsen, one of the greatest classicists of the nineteenth century, visited Oxford in March 1889. Legend has it that Mommsen was so keen to work at the Bodleian Library that he stood at the entrance at 7 am, waiting for it to open.  He was eager to examine a manuscript of Cassidorus’s Variae (probably MS. Bodl. 96 ) when Edward Nicholson (Bodley’s Librarian 1849-1912) showed him an early composite manuscript that contained Jerome’s translation of Eusebius’s Chronicle, MS. Auct. T. 2. 26. The manuscript had been bought at the Meerman sale in 1824.

(Mommsen made time for modern reading too: he dined with W. Warde Fowler at Lincoln College, who records in an excellent memoir of Mommsen that he had been reading Jane Eyre on his way from Berlin, and spoke of it with enthusiasm. Mommsen was keen to find a copy of Wuthering Heights at an Oxford bookstore.)

Jerome’s translation and expansion of Eusebius’ Chronicle
The composite manuscript proved to be quite extraordinary. Hiding behind a 15th-century addition, it contained an early copy of Jerome’s Latin translation of Eusebius’ Chronicle (Eusebius’ compilation was made in the early 4th century with Jerome’s translation and additions done by c. 380). On fols. 33-145 Mommsen discovered a mid-5th century copy of the text. Without any delay, Mommsen published an article about the discovery of the Oxford manuscript in Hermes 24 (1889) 393-401. Henry Nettleship (Corpus Christi Professor of Latin 1878-1893) had transcribed portions for him.


Marcellinus Comes, Chronicle
The manuscript yielded also another discovery: on fols. 146-178 there is the earliest known text of the Chronicle of Marcellinus Comes (d. c. 534), copied in the second half of the 6th century. Mommsen went on to edit Marcellinus’ Chronicle in 1894. The manuscript was correctly dated by the eminent palaeographer and latinist Ludwig Traube, and was reproduced in facsimile by another editor, the distinguished classicist and astronomer John Knight Fotheringham in 1905.

Importance of colour of the text
When Jerome translated Eusebius’s Chronicle into Latin, and brought it up to date, he wrote a preface in which he instructed scribes how to copy the complicated series of parallel columns which enabled readers to date biblical events by reference to events in the history of Egypt, Greece and Rome.

He wrote ‘the history is multiplex, possessing barbarian names, matters unknown to the Latin-speaking peoples, inexplicable numbers, and columns equally interwoven with events and numbers, so that it is almost more difficult to discern the order in which things must be read, than to arrive at an understanding of the meaning.’

‘The variety of colours should also be preserved; lest someone suppose that so great an effort has been attempted for a meaningless pleasure of the eyes, and, when he flees from the tedium of writing, inserts a labyrinth of error. For this has been devised so that the strips of the kingdoms, which had almost been mixed together because of their excessive proximity on the page, might be separated by the distinct indication of bright red, and so that the same hue of colour which earlier parchment pages had used for a kingdom, would also be kept on later ones.’

The work was important not only because of its chronology, enabling readers to date the fall of Troy, the rape of Lucretia, and the birth of Christ, but also because it provided dates for the lives of Greek and Latin authors. The Oxford manuscript is one of the four late antique copies to survive, and though the opening leaves are missing, the other copies are fragments or a palimpsest.* The Oxford manuscript is written in uncial script and has some contemporary slanting marginal annotations.

In 1902, to celebrate the Bodleian tercentenary, Ludwig Traube presented the library with his publication of a facsimile of the fragments of a similar manuscript of the Chronicle which had survived as binding fragments in Leiden, Paris and the Vatican. In his Latin preface he stressed the importance of photography for the study of manuscripts.  Traube saw the importance of the age of photography, as he named it, for the study of manuscripts, and hoped for the publication of more full photographic facsimiles of manuscripts. He would have delighted in the number and the quality of digital facsimiles. There is another fairly early copy of Jerome’s translation of Eusebius’s Chronicle in Merton College MS. 315 . This 9th century German manuscript is the oldest book at Merton College and likewise accessible on Digital.Bodleian .

* The surviving 5th-century witnesses are:

Reaching out with medieval manuscripts 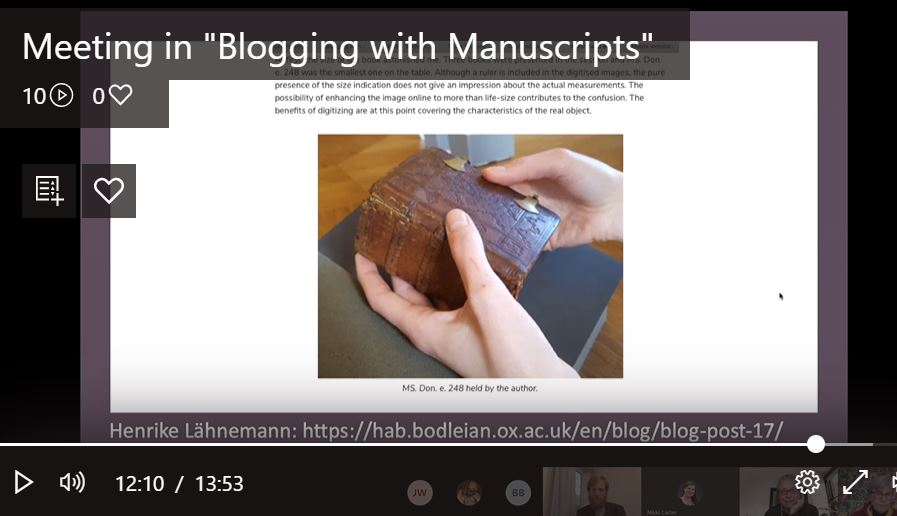 What do you get when you put together an excited group of medieval manuscript specialists and ask them to discuss blogging and teaching with digitized manuscripts? The answer: trumpets, drapes, marginal animal appearances, fake back-drops, cries of agony, laughter and lots of good advice.

A worldwide audience (from California to New Zealand!) gathered in three online sessions that were organized as additional evening events for the International Medieval Congress (IMC) at Leeds, 6–9 July 2020. The organisers were very pleased to see that each session had well over 100 participants. Our speakers shared their experiences on using digitized medieval manuscripts for teaching, and for reaching out to various audiences via social media, mainly through blogging and tweeting.