On display in the Proscholium of the Bodleian Library now are examples of Renaissance books from the printing house of Aldus Manutius (c.1450-1515).

One of the most visually appealing products of the Aldine press, the Hypnerotomachia Poliphili, will be the subject of a lecture by Dr Oren Margolis (Somerville College, Oxford), who will discuss the artistic and business background to the production of this exquisitely illustrated and mysterious Renaissance book. Dr Margolis will speak on 6 February in the Convocation House of the Bodleian Library, at 5:30 pm.  The lecture is free to attend but please register online:

Reception following hosted by the Centre for the Study of the Book and the Ludwig Boltzmann Institute for Neo-Latin Studies.

A spectacular travel-sized library from the 17th century is now in the Bodleian Library.
.. read more [reblogged from http://www.bodleian.ox.ac.uk/news/2014/dec-18]

Georg Bartisch was a surgeon and an inventor, but he is remembered primarily for his Ophthamoduleia (literally ”eye-service”), a treatise on diseases and disorders of the eye. The 1583 text is notable for several reasons. First, it is widely considered the first Renaissance treatise on eye disorders and surgery. Secondly, though most serious texts were written in Latin at the time, the Ophthalmodouleia was published in the vernacular, German. Finally, the book, which Bartisch published at his own expense, included ninety one full-page woodcuts, several of which were layered to act as flaps. As a result, the reader could examine different layers of the human brain (for example) by flipping through the woodcuts. This experience simulated the process of dissection for students, professionals, and the general public.

Bartisch was not the only one – nor the first – to include interactive flaps in his text. Heinrich Vogtherr the Elder introduced the layered flaps to anatomical prints in 1538 when he used 24 woodblocks to create an anatomical print of the female body. Vesalius’ Fabrica, which marks the beginning of modern anatomy, included flaps; and in 1619, Johann Remmelin included 120 flaps in the anatomical illustrations for the Catoptrum Microscopicum, which has been digitised by the University of Iowa. This technique was still used long after the seventeenth century: E.J. Stanley created layered illustrations for an anatomical textbook in 1901. Read more and watch anatomical flap books in action here.

As useful as they were for simulating dissection, paper flaps were used in more than just anatomical texts. Indeed, the 1570 English edition of Euclid’s Elements uses flaps to illustrate geometric concepts. And as explored in an earlier post by Sarah Wheale, harlequinades used flaps to create ‘a surprise unfolding of the story.’ 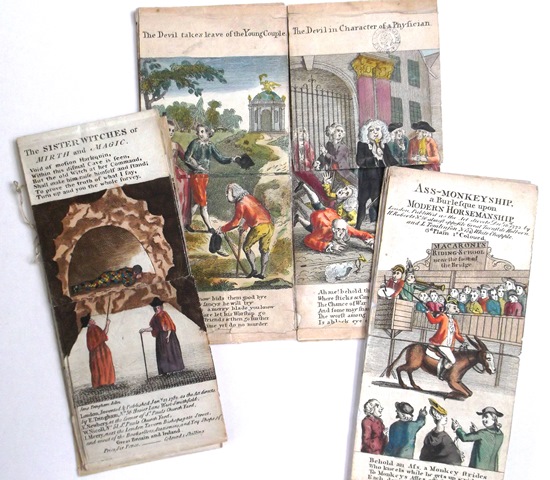 These notes on the Bodleian’s collection of harlequinades, by Sarah Wheale (Bodleian Rare Books), were  first posted in 2008-9, and are presented again in anticipation of the conference taking place in Oxford, Sept. 2014, ‘Forms and formats: experimenting with print, 1695-1815’ See the event posting to register: http://bit.ly/1lWPgxO

A harlequinade (known also as a metamorphosis, flap-book or turn-up book) is composed of two single engraved sheets. The first sheet is folded perpendicularly into four sections. A second sheet is cut in half and hinged at the top and bottom edges of the first so that each flap could be lifted separately. The sheets are folded into four, like an accordion, and then roughly stitched with a paper cover. A verse on each section of the flap tells a simple story usually concluding with instructions to turn a flap to continue. When the flap is turned either up or down the viewer sees that half of the new picture fits onto the half of the un-raised flap, so the act of lifting one flap after another creates a surprise unfolding of the story.

The Library has recently (in 2009) acquired an album of 89 coloured prints dating from the early 1820s. It may have been issued by William Darton Jr. (1781-1854) and his firm at Holborn Hill during the mid-1820s as a sample album to show potential customers examples of his work. It contains a small number of sheets originally issued in 1800 by William Darton Sr. (1755-1819);  11 harlequinades in unfolded sheets with the imprint of B. Tabart & Co., and some sheets bearing Darton Jr’s imprint with dates ranging from 1821 to 1824. This mix of imprints suggests that Darton Jr. inherited some of his father’s old stock upon his death, including some of Benjamin Tabart’s publications which William Sr. possibly acquired in 1811 when financial difficulties may have forced Tabart to sell off some of his stock.

See the records of the pictured harlequinades here:

The Sister-Witches, or mirth and magic

Dr Last, or the Devil on two sticks

12 May 2014: The Oxford Bibliographical Society hosted Cristina Dondi speaking about ‘the first printing revolution’ and our understanding of the transformation of the economics of communications.
Citing the many copies of 15thc-century books with former owners’ inscriptions or just localisable and datable decoration, and binding style or manuscript annotations, Cristina Dondi explained the possibilities of using books themselves as evidence for the impact of printing in transmitting texts and images.
The aim of the ERC-funded project headed by Dr Dondi, beginning this year, “The 15th-century Book Trade: An Evidence-based Assessment and Visualization of the Distribution, Sale, and Reception of Books in the Renaissance“, is to gather evidence from early printed books, to analyse and categorize the marks of ownership, by geographical area, period, or person (gender, status, and profession). This is the approach established by Dr Dondi in the database, Material Evidence in Incunabula. The current project will seek also to more closely analyze the textual contents of editions (not just the main text and author, but all dedications, prologues, etc.) This approach extends the practices of Bod-Inc, the catalogue of 15th-century books in the Bodleian, and promises to expand our knowledge of the transmission of texts in the early period of print.
A further exciting development will be image matching analysis of illustrations in Venetian incunables, using the image matching software developed by the University of Oxford Department of Engineering for the Broadside Ballads Online database hosted by the Bodleian Digital Library.

Bodleian Library Rare Books have posted the following to any helpful readers for identifying the provenance of this 16th-century publicatoin:

“Anyone like to help us transcribe this? We are halfway there!” See the catalogue record at:
http://tinyurl.com/nsc9ef7

Follow @RareBooksofBod on twitter for more questions and answers about the Bodleian Library’s Special Collections of printed books.

Dr Anders Ingram (National University of Ireland, Hakluyt Edition Project) used copies of the second edition of Hakluyt’s Principle Navigations (1598-1600) to explore the nature of censorship in Elizabethan England. At issue was the passage describing the Cadiz Expedition of 1596, led by the Earl of Essex and Lord Howard, during which English and Dutch troops sacked the Spanish city.

But the failure to capture the Spanish treasure fleet, and the conduct of the leaders, including the distribution of the booty, led to royal suppression of Essex’s own account of his actions. Two years later, Hakluyt included in his Navigations a “brief description” written by the doctor who travelled on the Ark Royal. The pages containing this episode were later excised from many copies of the work, and a new title page was produced omitting mention of the Cadiz expedition. Examining the physical evidence in three copies of Hakluyt’s Navigations from Bodleian collections, Dr Ingram showed that these represented different variants, and called into question the reason for the removal of these leaves: was this censorship, or action by the publishers in advance of the appearance of Hakluyt’s second volume, printed in 1599, which had found a sponsor in Robert Cecil, one of the examiners of the costs of the expedition during the controversy?

In an exciting conclusion to the autumn season of masterclasses, Felix Waldmann (Cambridge) spoke on ‘James Tyrrell, John Locke, and the text of Patriarcha non Monarcha (1681): the evidence from some Bodleian copies’.
Examining three Bodleian copies, Dr Waldmann found that the pattern of annotations, corrections, and manuscript additions in these copies, from the libraries of Thomas Barlow (the subject of an earlier masterclass) and John Locke himself, contributed significant evidence touching on theories of the composition of the text, which have variously described the publication as a collaboration between Locke and Tyrrell or Tyrrell’s original work which inspired Locke’s Two Treatises of Government.
This was the second in the series of Early Printed Books masterclasses convened by William Poole (New College).

A collection of Italian verses on a variety of subjects, including: the hat, gypsies, the goose, the horse, mustard, the cap, and sausages. The date, suggested by the British Museum’s Short-title catalogue of books printed in Italy, is supported by an early manuscript note in this Bodleian copy, which includes the date 1545.

This Italian text serves as a guide for confessors, providing them with questions to put to those who come for confession. Each question, or set of questions, for example, “Have you cursed the sky and the stars, sun, and moon?”, is followed either by an instruction – “You have to ask how many times: ten or a hundred, etc., or more or less, etc.” – or by a statement of the seriousness of the sin (for example, “mortal”), together with references to autoritative texts on the matter. The book is held in a re-used Parchment wrapper containing a manuscript document apparently from a widow to her confessor. She asks the confessor to intercede with the bishop on her behalf, in connection with her desire to enter religion.