The second in this year’s series of classes, convened by Will Poole, on annotated books in Bodleian Library collections was led by Kasper van Ommen (University of Leiden, and Humfrey Wanley Fellow at the Bodleian Library). He examined annotated books from Joseph Scaliger’s library, showing examples that had come into Bodleian collections by a variety of routes; as gifts from Scaliger himself to Henry Savile [Savile Ee 1(5)] or by descent of owners after Scaliger’s library, by the terms of his will, was divided and the ‘books in foreign tongues’ given to University of Leiden Library, establishing an early collection of  Middle Eastern and Asian-language books there; then Scaliger’s friends including Daniel Heinsius, Van der Myle and Baudius had the pick of the learned books in Latin and Greek; and the remainder of his library was sold at auction. By these means, particularly through the later sale of the books of Daniel Heinsius’s son Nicholas, many of Scaliger’s books bearing his annotations were dispersed and some came into the hands of English scholars and collectors. Some 27 books from Scaliger’s library or sent as dedication copies by him are in the Bodleian now.

Introducing the history of Scaliger’s library, Van Ommen pointed out that he was a ‘star professor’ of the late 16th century, and that his gifts of his own works to respected friends reflected both his productivity and his self-regard. This backfired with his presentation of the Cyclometrica to Henry Savile of Merton College, Oxford, who was not impressed with Scaliger’s claim to have squared the circle (a controversy in which John Wallis, a later Savilian Professor of Geometry, was similarly engaged with Thomas Hobbes in the middle of the 17th century).

Carrying the theme of discovering printed books that are unique by virtue of manuscript additions or annotations, the class examined a volume annotated by Scaliger, the 1579 edition of his own publication of Manilius’s Astronomicon, marked by him for the second (authorized) edition, and also marked in red crayon by the printers in Leiden as a copy-text for the 1600 publication. [Bodleian Library Auct. S 6.12] The volume also has added index entries as seen in the second image here.

The class discussed parallels between the Leiden and Oxford; did Thomas Bodley, a diplomat based in The Hague from 1588 to 1597, regard Leiden’s library as a  model for the Bodleian, which he later founded as an ‘Ark to save learning from the deluge’ – an echo of the Arca Scaligeri, the cabinet made to hold Scaliger’s Oriental books when they came to the Leiden library?  Each provided early catalogues of scholarly books, the Nomenclator of Leiden in 1595 and Thomas James’s 1605 Catalogus librorum bibliothecæ publicæ.

One indication of Bodley’s connection with (and admiration of) scholarship at Leiden may perhaps be seen in a letter transcribed in the newly launched resource from the Centre for Editing Lives and Letters, The Diplomatic Correspondence of Thomas Bodley, 1585-1597;
http://www.livesandletters.ac.uk/cell/Bodley/transcript.php?fname=xml//1589//DCB_0802.xml. This was prepared under the direction of former Humfrey Wanley Fellow, Robyn Adams.

“I am using this one-month fellowship at the Bodleian Libraries to explore how historical knowledge and design practices in the eighteenth and early nineteenth centuries connected architecture, furniture, antiquarian and medievalism. I’ve been making use of the Bodleian’s Special Collections including John Aubrey’s MSS for Chronologia Architectonica, Richard Gough’s topographical collections, and the Beckford papers — particularly letters by Franchi, Beltz and Britton to Beckford on architectural, antiquarianism and heraldic matters. I am also tracking down an inventory of Lee Priory by the antiquary Samuel Pegge, working on Bardwell’s portrait of the Earl and Countess of Pomfret, c.1750 (at the Ashmolean), and, finally, examining eighteenth- and early-nineteenth century Gothic Revival furniture found throughout Oxford’s colleges.

Grasping the opportunities offered by this fellowship, I co-organised a highly successful and international one-day symposium on the eighteenth-century Gothick Revival (7 August). Over thirty delegates attended, and were drawn from Britain, Ireland, France, USA and Canada. It is our intention to publish the conference proceedings in due course.
Details of the symposium can be found at:
http://18thcenturygothick.wordpress.com ”

The Dunscombe Colt Fellowship supports a visiting researcher with an interest in the architecture or material culture of the long eighteenth century. The Fellowship is supported by the Georgian Group and the British Society for Eighteenth-Century Studies.

For information about fellowships, visit the webpages of the Bodleian Libraries Centre for the Study of the Book.

In 1919, at the end of the Great War, Albert Einstein’s theory of general relativity received tremendous support after some epoch-making astronomical observations during a total solar eclipse. Einstein and his theory of relativity became the topic of serious discussions among physicists and philosophers as well as common currency in the wider cultural world. In this context, one of the heated discussions triggered by the new theory was on the existence of the ether.

What was the ether? Generally speaking, the ether was a loose concept that philosophers of all times had imagined as the medium through which interactions such as gravity and magnetism were transmitted. Nineteenth-century British physicists had turned this entity into an all-pervading mysterious medium essential to make sense of Maxwell’s theory of electromagnetism and light: because in this theory, any form of electromagnetic radiation, light included, was regarded as a wave; and if there was a vibration, there had to be something to vibrate. That was the ether at the turn of the century.

Einstein’s relativity and, to a lesser degree, the new quantum theory posed serious challenges to the notion of an ether. Continental physicists had never taken this entity too seriously, but scientists in the British tradition could not easily abandon the ether. For them, explaining natural phenomena involved imagining the hidden mechanisms of Nature and not simply finding valid equations to predict them; and, thus, the ether was essential to account for radiation and action at a distance.

In the 1920s, when theoretical developments, experimental results and international consensus forced the abandonment of the ether in theoretical science, even among the young generation of British physicists, a new and very popular technological development, spreading in every middle-class household, came to the rescue of the ether, at least for a while: wireless and radio broadcasting.

My research as a Marconi fellow at the Bodleian Library focuses on the life of the ether in the world of wireless after its death among theoretical physicists. Because, pace Einstein and his theory, ‘the ether’ remained as the medium through which wireless waves were transmitted from the sending station to the receiving apparatus. And with the rapid spread of broadcasting in the mid-1920s, the ether also became a battlefield between nations, broadcasting companies and wireless amateurs. This non-existent medium soon needed to be regulated, controlled and secured. 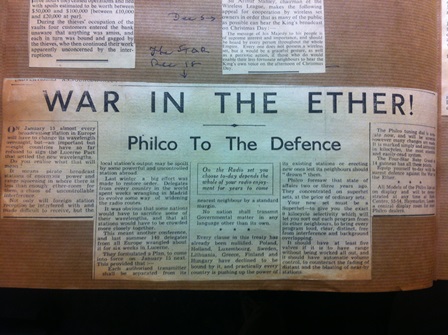 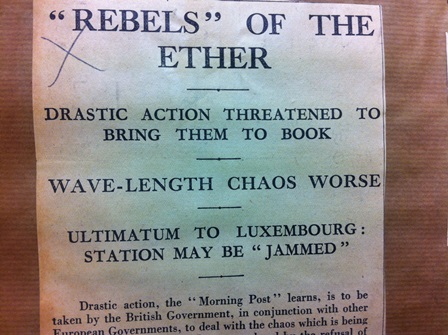 Gabriele Balbi (USI) delivered the 2013 Byrne-Bussey Marconi Lecture on Marconi Day, 20 April, on the subject of why the Marconi Company was apparently slow to appreciate the broadcasting option of wireless. From the first development of wireless communication, the technology had advantages over the wired telegraph. Yet wireless point-to-point communications were subject to some seeming deficiencies: a lack of privacy and the potential for disruption, as anyone with a wireless set might pick up and listen to messages, or even disrupt them, as occurred at a 1903 demonstration of wireless at the Royal Institution in London.

Some individuals in the Marconi Company recognized that this apparent failure in fact heralded a new era of mass communication: the birth of broadcasting. But the company’s business model, and political relationships with the Post Office which regulated wireless and new technologies like the point-to-point wireless telephone that the Company wanted to exploit, meant that it was the 1920s before the Marconi Company fully engaged with the broadcasting option.

Ernesto Gomez (Bodleian Library) writes:
Marconi Day 2013 was celebrated by the Oxford and District Amateur Radio Society with a special Radio Club Station set up  in the Museum of History of Science to communicate with radio amateurs around the world. The Oxford radio amateurs used the call sign GB4HMS.  Amazingly one of the earliest  contacts of the day was with Newfoundland, the historical place well remembered for being the first to receive a transatlantic message in 1901.”

This year around 63 clubs from different latitudes managed to commemorate the Marconi achievements in the field of radio transmissions.

In 2013 the Bodleian Libraries Centre for the Study of the Book welcomes the following visiting researchers:

Byrne-Bussey Marconi Fellows, 2013
Jaume Navarro (Universidad del País Vasco) A conceptual and cultural history of the demise of the ether

Jonathan Wainwright (University of York, Faculty of Music) A catalogue of the Music School collection of the Bodleian Library

The Dunscombe-Colt Research Fellow 2013 (The Georgian Group and BSECS)
Peter Lindfield (Post-Doctoral Tutor at the School of Art History, University of St Andrews and Visiting Lecturer, Kunsthochschule, University of Kassel) Gothic Histories and Buildings of the Long Eighteenth Century

More about Visiting Fellowships at the CSB: http://www.bodleian.ox.ac.uk/csb/fellowships