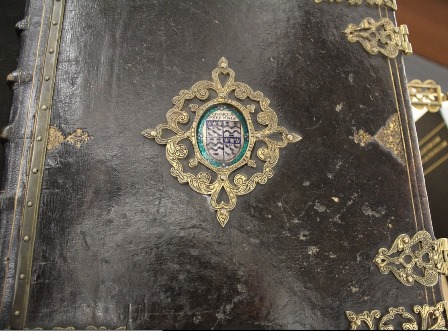 27 March 2014: Papers at the Renaissance Society of America 2014 annual conference explored the 17th-century history of the Bodleian Library, opening questions about the ways in which the practices and intellectual aims of individual librarians shaped what scholars at the time could find on the shelves.

Robyn Adams, University College London
Ghosts in the Library: The Hidden Spaces within the Bodleian Library Records
Robyn Adams examined the early history of collecting by Thomas Bodley and his librarian, Thomas James, as this is reflected in the Benefactor’s Register, a printed list of donations in between 1600 and 1604, with manuscript additions of later donations, and in the first printed catalogue, prepared by James and published in 1605. She aims now at the creation of a virtual model of DHL, as it was in 1605, an enterprise which highlights how much of what we know is either made evident, or hidden, by the physical spaces of the library.
https://www.flickr.com/photos/uclnews/sets/72157633093558579

Brooke Sylvia Palmieri, University College London
Unpacking the Baggage Books: Acquisition Policies in the First Fifty Years at Bodley’s
Library
Continuing the theme of Robyn Adams’s presentation, Brooke Palmieri told of her own experience in discovering that what’s in the catalogue may not be on the shelf — and vice versa. A spectacular example of this, indicative of how library procedures differ from users’ aims, is ‘Robert Burton’s astrological notebook’, at the shelfmark 4o R 9 Art., which takes on a different character depending on whether it is considered a collection of three separate printed works – namely Ptolemy’s Tetrabiblos, John Dee’s Propaeudeumata Aphoristica, and Cyprian Leowitz (though, be warned, the name is spelled Leovitius in the Bodleian’s online catalogue record for this item) Brevis et Perspicua Ratio Judicandi Genituras – or as a manuscript notebook, with extensive astrological notes by Burton, which happens to be made up of the printed pages of these works.

Giles Bergel, University of Oxford
Ballads and Other Ridicularia: Cheap Print in Thomas Bodley’s Library
Today the Bodleian has a large collection of ballads and ephemera dating as far back as the 16th century. But, Giles Bergel asked, when did the first broadside ballad enter the Bodleian Library’s collections? Given Thomas Bodley’s well-known execration of “riff-raff” and “baggage books”, in which he included play-texts, this cheap vernacular printed form was probably not welcome among the first acquisitions. When Robert Burton’s (d. 1640) bequest of his books arrived at the Bodleian, Bodley’s second librarian John Rous selected many English-language works, including many literary works, for the library shelves. To be sure, Rous classified a group of small-format vernacular texts as “ridicularia” – but they were entered into the catalogue nevertheless. Later in the 17th century, antiquarian ballad-collectors were John Selden (d. 1654), whose ballad collection was acquired by Samuel Pepys, though many of his books and manuscripts went to the Bodleian, and Anthony Wood (d. 1695), whose ballads were first held by the Ashmolean Museum, and are now in the Bodleian.

Each of the papers added a perspective on how our own research is framed by the concepts of genre and value in library collections, and reminded us that this carries a residue of the practices that shaped these in earlier centuries.