This post by Collaborative Doctoral Partnership student Chiara Betti, who is studying the Rawlinson collection of copper plates at the Bodleian Library, is re-blogged from the St John’s College, Oxford, blog – read the whole text there. 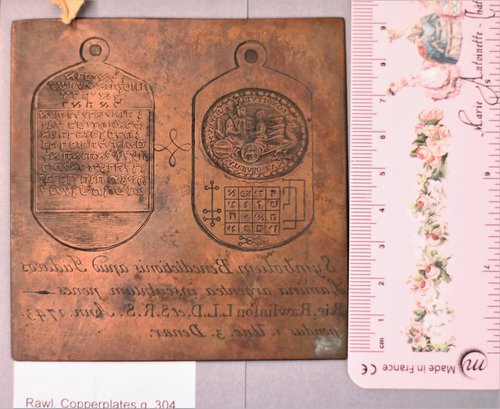 In 1756 the University of Oxford and St John’s College received one of their most significant bequests ever from the late Richard Rawlinson (1690–1755).

Following a quarrel with the London Society of Antiquaries, Richard Rawlinson left most of his printed books, manuscripts, and all his printing plates to the Bodleian Libraries. His extensive estates went to St John’s College.
While there has been a constant interest and much research on Rawlinson’s books, the copper plates have been awaiting further studies for centuries. Thanks to funding from UKRI, the Rawlinson copper plates are now at the centre of a Collaborative Doctoral Partnership project jointly supervised by the Institute of English Studies (University of London) and the Bodleian Libraries.