At the first of the Literary Manuscript Masterclasses this term, on October 27, we were shown a small, mass-produced notebook, probably bought from a stationer in the mid-1780s, in which the young Jane Austen had set down a series of stories and plays. Kathryn Sutherland, professor of English literature, described the importance of this manuscript, one of three volumes of juvenilia.

Of Austen’s famous six published novels, only two chapters of Persuasion survive in manuscript form.  The three juvenile notebooks (which include’ The History of England’, on display from the BL website) and other short pieces, working drafts of two novels and a fair copy of a novella, are all we have left from the author’s own hand

Andrew Honey of the Bodleian’s Conservation Department took the class on a tour of the physical aspects of the volume, including a session of paper folding and paper tearing (using copier paper!), to demonstrate that this was a machine-made notebook, a relatively cheap mass-produced item of stationery – the equivalent, though thank goodness in 18th-century dress, of a Hello Kitty notepad. 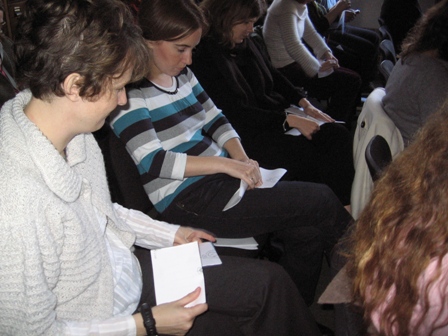