Guest blog by George Haggett (Music, Magdalen College).
University of Oxford students are invited to enter essays about their own book collections for the Colin Franklin Prize. Entries are accepted in Week 6 of Hilary Term. See the prizes webpage for details.

In 1780, antiquarian Samuel Pegge returned a ‘very curious’ scroll to the curator of the British Museum, containing some 229 recipes (see Figure 1). They were compiled circa 1390 by Richard II’s cooks, and Pegge would go on to publish them as The Forme of Cury: the oldest known cookbook in the English language.

Tired of my thesis and needing something to do with my hands, I saw in Cury an opportunity to combine my dual obsessions with cooking and Middle English.  Medieval readers ‘ruminated’ on and ‘regurgitated’ scripture. Our epicurean way of describing texts is more than metaphor: it draws meaning from food’s ephemeral qualities. An art form that you swallow, food is either digested or decomposes, and communicating flavour is possible only by analogy, contingent on visceral likes and dislikes and deep cultural impulses. I will never taste the Middle Ages. But through these books I see the dazzlingly generative potential of recipes, both to provoke centuries-long discourses, and to bring hands to utensils and conjure up tangible, nourishing food.

I bought a cheap paperback reprint of The Forme of Cury from open-access project ForgottenBooks.org. This is my ‘dirty’ copy of Cury. In Arial typeface throughout and stained by stock and spices, its marginalia are my scribbled translations, timings, temperatures, and substitutions for obscure herbs.

I will focus here on editions of sources from Northern France and England in the thirteenth to fifteenth centuries; cultures in which upper-class milieus moved liberally, sharing texts and fashions. New-world foods like potatoes, tomatoes, and corn are absent, but other ingredients and influences that travelled with merchants, crusaders, and pilgrims (attested to by many Mediterranean, Asian, and North African sources beyond the scope of this collection) are palpable. Food’s religious significance manifests in the observance of feasting and fasting, and in broader ethics of the body. Medical ideas of the humours influence the preparation of meats, roasted or boiled according to how ‘wet’ or ‘dry’ the animal was. When something so supremely carnal as food is at issue, questions of health, spirituality, and sensuality are never far from the table.

One of my earliest sources is The Viandier of Taillevent, a thirteenth-century cookbook in side-by-side Old French and Modern English translated by Terence Scully, with appended modernised recipes by D. Eleanor Scully. It is associated with Guillaume Tirel, cook to Charles V and Charles VI of France, although some of its manuscript copies predate his lifetime. But while those manuscripts don’t tell us about authorship, they make up for in what they reveal about their readers: ‘dusted with powders, splattered with sauces, burnt or smudged’, they seem to have been used by literate cooks. They would have been highly skilled, too. Among the Viandier’s suggested centrepieces are involve inflated swan skins, a tower of mutton bones, and ‘Hedgehogs and Spanish Farts’ (stuffed sheep stomachs). This edition’s striking cover art is fittingly anachronistic dress and cutlery, but fails to acknowledge D. Eleanor Scully’s co-editorial labour.

Lots of medieval sources themselves had hybrid functions. Take John Crophill’s Commonplace Book (Harley MS 1735, pre-1485), which offers alongside its 69 recipes texts on alchemy, divination, and a medical treatise called ‘The Doom of Urine’. Another example is the late-fourteenth-century housekeeping treatise Le Ménagier de Paris. Written by an elderly husband for the instruction of his teenage wife. Its recipes are accompanied by moral tales (including ‘the woman who laid an egg’) and guides to gardening and falconry, and feminist economic historian Eileen Power translated most of it into modern English in 1928. Ménagier’s recipes share much with Taillevent, including a method of retaining the water after boiling peas, a delicacy known in Wigan chip shops today as ‘Pey Wet’.

Thrillingly, the previous owner of my copy of Thomas Austin’s 1888 edition Two Fifteenth-Century Cookery-Books left three loose leaves inside the cover: an 1803 screed cryptically signed ‘Coquinarius’ and two photographs of medieval manuscripts. Based on its historiated ‘T’s, I have tentatively identified the first as two recipes from Harley MS 4016: ‘Blanch Porrey’ (a leek-based sauce for eel) and the evocatively titled ‘Garbage’ (chicken giblets, heads, and feet steeped in spiced broth). (see: Austin 1964, 90; 72.) 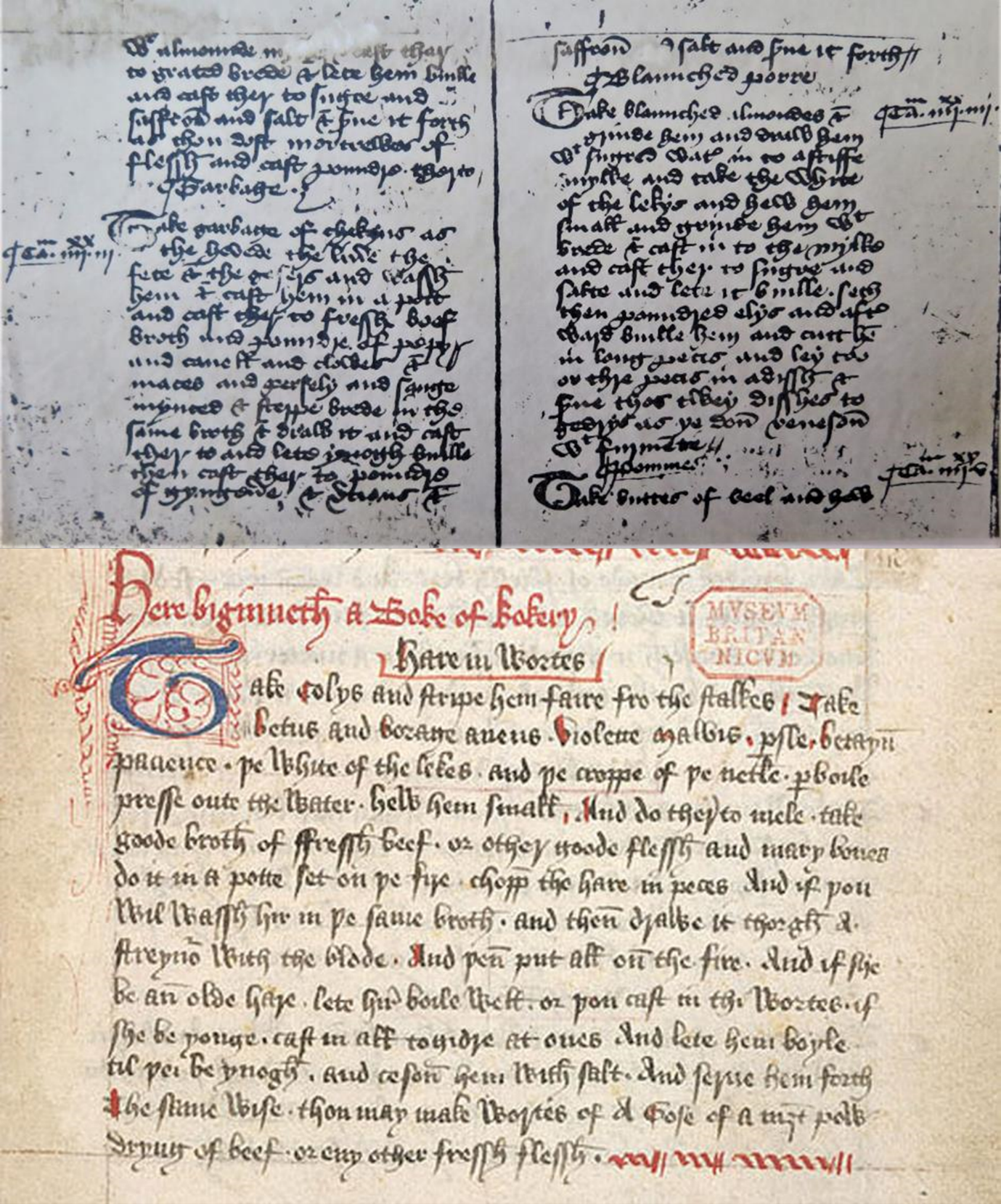 I identified the second based on each recipe beginning, ‘ffor to make’, which Cury does in its second section. The recipes include extravagant dishes, like swan in an aromatic sauce thickened with rice-flour. In his foreword to Cury, Pegge makes clear that this ‘horrid and barbarous’ medieval food is not to his taste.

My third version of Cury was also never intended for culinary use. Measuring three-by-three centimetres, it contains dozens of Cury’s recipes in Middle English, reproduced in 1:12-scale by Dateman books, who furnish the shelves of period-specific dollhouses. It serves as an important reminder that medieval life, so alien to Pegge in 1780, is still a curio in late-capitalist hobby culture, part of a wider constellation of conservative tweeness (Dateman also do Gilbert and Sullivan scores and a new mini-newspaper for each royal baby).

We are served historical sources and consume them. Whether in the handwriting of some scribe or via many editorial hands, texts have always been ‘cooked up’ in some way. Chopped and changed, blended, and taken with a pinch of salt, all writing is a concoction, and we receive it according to our appetites.