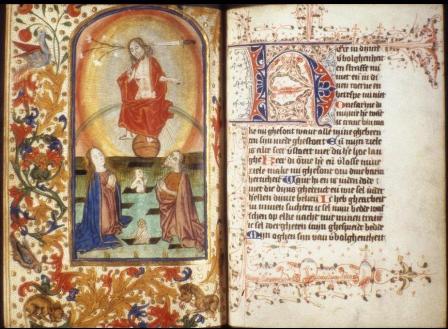 Dr Kathryn Rudy will give the second masterclass of Michaelmas term on Monday,  15 October at 2.15pm, in the Pitt Rivers Museum Lecture Room.

Medieval manuscripts had a long shelf-life and often changed hands many times. Made of durable parchment—supple as paper but tough as leather—they could easily serve multiple owners and users over a period of decades or even centuries. Laypeople often handed their books down the generations or sold them.

The updates people made to ‘granny’s book’ often reveal the new fashions in prayer culture, and along with that, their culturally-constructed hopes and fears. In this masterclass we will look at prayerbooks made in the century before the Reformation; although we will use the methodology of codicology and stratigraphy to study books closely, the session is really about people and what they revealed about themselves through their manipulations. At the end of the fifteenth century, people often had two goals when they updated their books: to give them more decoration, and more indulgences.

Dr. Rudy is lecturer in art history at the University of St. Andrews. She has written on real and virtual pilgrimages, the word as image, proverbs in medieval marginalia, and the ways in which medieval users handled their manuscripts. Her most recent book is Virtual pilgrimages in the convent: imagining Jerusalem in the Late Middle Ages (Turnhout, 2011).

All welcome. Enquiries to martin.kauffmann[at]bodleian.ox.ac.uk