‘We have watched this babe of four or five months, gazing on the moon with all the fixedness of attention belonging to an astronomer.’

This note is written on the manuscript of a poem recently acquired by the Bodleian. Its author is Manley Hopkins and its subject his infant son, Gerard, who sadly saw little in print during his own short life but is now celebrated as one of our greatest poets. The poem was first published in 2010 in a special issue of the Hopkins Quarterly when the manuscript was still in private hands. It is now available for study along with another poem mourning the death in 1854 of Manley’s fourth son Felix and a letter of 1840 from Kate Smith (later his wife) to a member of their family. The manuscripts join the Bodleian’s extensive collection of Gerard Manley Hopkins’ poetical manuscripts.

Manley was at this time a prosperous twenty six year old, well established in insurance and fervidly developing his lack of formal education through reading, writing and music. His poetry is not technically distinguished but I find this hymn to his son moving in its mixture of fear, joy and humility. As it closes, the child becomes, rather recalling Wordsworth, a father to the man, thrilling his father’s soul with the purity of his devotion to light. The idea carries poignancy from where we stand, knowing that the son would die long before his parents, having blazed far beyond them in religious intensity and scintillating expression. The scene also curiously brings to mind Coleridge’s account of his son Hartley, hurt from a fall: ‘I caught him up crying & screaming—& ran out of doors with him.—The Moon caught his eye—he ceased crying immediately—& his eyes & the tears in them, how they glittered in the Moonlight!”

Manley’s verses of course bring to mind one of Gerard’s most ecstatic poems, sent as a present to his mother on her birthday in spring of 1877 when he was at his happiest, studying to become a priest at Beuno in Wales. That poem is ‘Starlight Night’. Was the son thinking of his father’s tender tribute, so carefully preserved in the manuscript? 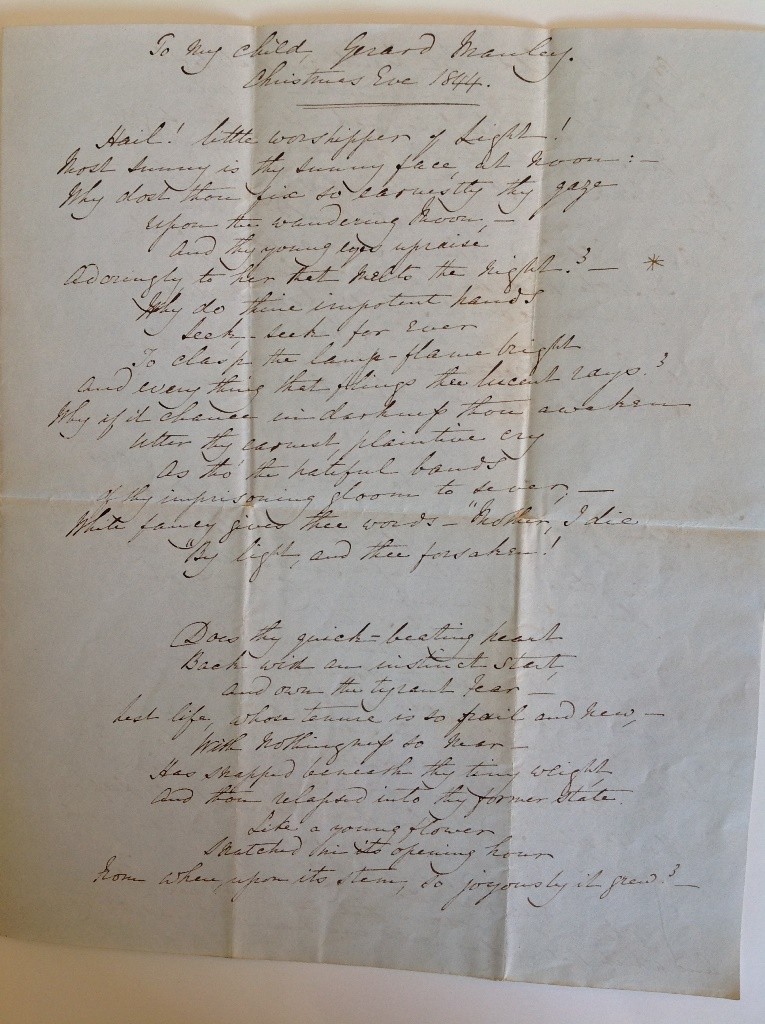 Hail! Little worshipper of Light!
Most sunny is thy sunny face at noon:-
Why dost thou fix so earnestly thy gaze
Upon the wandering Moon, –
And thy young eyes upraise
Adoringly to her that melts the night? – *
Why do thine impotent hands
Seek, – seek for ever
To clasp the lamp-flame bright
And everything that flings thee lucent rays?
Why if it chance in darkness thou awaken
Utter thy earnest, plaintive cry
As tho’ the fateful bands
Of thy imprisoning gloom to sever, –
While fancy gives thee words – ‘Mother, I die
By light, and thee forsaken!’

Does thy quick-beating heart
Back with an instinct start,
And own the tyrant fear –
Lest life, whose tenure is so frail and new, –
With nothingness so near –
Has snapped beneath thy tiny weight,
And thou relapsed into thy former state,
Like a young flower
Snatched in its opening hour
From where, upon its stem, so joyously it grew? –

Or, is it, child, that beauty and that light
Are infancy’s true nourishment? – its eyes
As steel unto the lode-rock bend their sight
In sympathy , to all of pure and bright; –
That clouds are afterthoughts; – darkness a blot
That in creation is, – yet should be not.
And childhood, like the Huma, has no feet
To settle mid the shadows of the earth,
But hovering o’er it, still drinks in the dew
Of heaven, its land of birth;
While its wings catch the all-surrounding hue
Of liquid sapphire, where they ever beat?

If so, then worship on. No Gebir’s best wrong creed
Stains thee with error. Drink of light thy fill:
And tho’ thy feet in after-life may bleed
As whose do not? – upon Time’s stoney way,
The first warm impulse of thy heart obey,
And love it still!
Yes! Love it as it rises o’er the East,
Love it in all the glowing hues of Even
Love it reflected over Earth’s wide breast,
And trembling in the starry lamps of Heaven.
Seek it in gemmy caves, and snowy mountain tips,
In Friendship’s eyes, on sweet Affection’s lips.
Thou’lt often find it where thou dreamest not, deep hid
‘Neath surging waves, in mines, – in human hearts.
And many a ray
Will meet thee on thy way
Cherished in bosoms that the world has chid, –
And which that chiding world has mainly turned astray.

Oh worship on! See yonder orient gates
Whose half-oped leaves the streaky dawn disclose;
Where soft, diffusive light impatient waits,
And on the verge, with tender lustre glows.
Behold! The Light of Light – the Righteous Sun upsprings
With balmy healing dripping from his wings!
Before His beams, all other radiance pales.
Fountain and Source of light, and heat and love
The dim horizon lift thyself above,
And haste to our dark world, that thy bright Coming hails!

Gaze on, my child, thy fill.
Yet stay! – an instant turn on me thy innocent sight,
Pour thro’ thine eyes my heart full of delight,
And all my being thrill –
Thou Worshipper of Light!

*We have watched this babe of four or five months, gazing on the moon with all the fixedness of attention belonging to an astronomer.

Look at the stars! look, look up at the skies!
O look at all the fire-folk sitting in the air!
The bright boroughs, the circle-citadels there!
Down in dim woods the diamond delves! the elves’-eyes!
The grey lawns cold where gold, where quickgold lies!
Wind-beat whitebeam! airy abeles set on a flare!
Flake-doves sent floating forth at a farmyard scare!
Ah well! it is all a purchase, all is a prize.
Buy then! bid then! – What? – Prayer, patience, alms, vows.
Look, look: a May-mess, like on orchard boughs!
Look! March-bloom, like on mealed-with-yellow sallows!
These are indeed the barn; withindoors house
The shocks. This piece-bright paling shuts the spouse
Christ home, Christ and his mother and all his hallows.